If you click on a link and make a purchase we may receive a small commission. Read our editorial policy.
Fight Crab review
Fight Crab is a brilliant execution of a superbly simple joke, and also a complete nightmare.

If there's one thing I respect in any creator, it's commitment to a concept. I believe in going all-in on things, even when they're ridiculous, on the principle that passion and dedication can elevate even the most outlandish nonsense to a state of beauty.

There's a lot of pressure on me here. I bang on about crabs all the damned time, as they're just about my favourite things. I also like really weird, silly concepts presented with a straight face. And so if ever a game was tailor-made for me, it's Fight Crab - a game where you can play as any one of a suite of realistically-modelled crabs, using knives, hammers, revolvers and more to battle with other crabs. It is the glass slipper to my PC gaming Cinderella, it would seem, and the second RPS was offered code for it, it landed in my inbox.

This sense of expectation has been building for some time. When images of Fight Crab started coming out on Twitter a while back, I started getting bombarded by people "paging" me to the tweets in question, gleefully waiting to see what I had to say about them. The gifs and such made me laugh, for sure. But for the most part, I thought "ha, yeah, that's a funny idea, and the crab models are very good". Now the game is out, and I've played it. But if I am being completely honest, my opinion remains broadly in line with my opinion of those animated gifs.

That's not to say I'm nonplussed. Fight Crab really is as brilliantly funny as I hoped it might be, and the reason for that is that it presents itself as if it is a completely reasonable game.

In fact, it feels exactly like something you'd expect to find in a downmarket Tokyo arcade, among a herd of cabinets left largely unreplenished since the arse end of the 2000s. It's loud, both visually and acoustically, with horrible, clashing fonts, a boomingly inhuman announcer voice, and a non-stop soundtrack of pitch-perfect arcade-fighter music. Claws clink deafeningly when they clash, the screen is awash in flashing controller prompts, and explosions, lasers and coloured lightning sustain a perpetual assault on the senses.

Only, instead of the grimacing anime generica you'd expect to fill out these stylistic trappings, there are crabs. Really, really well-modelled crabs. From frog crabs, to carrier crabs, to mud crabs and my very favourite crab (the inestimable Birgus Latro), all the classics are here. If you take pleasure from observing crabs, as I do, there is a lot to be appreciated.

That, in itself, is quite funny. But what makes it sublime is the fact that they're armed with human weapons. After fighting my way through a few unarmed crustaceans in the game's first set of levels, a lobster holding a knife and a revolver descended from the sky, and I came out with one of those hard, abrupt laughs that can only be birthed when you're blindsided by a perfect joke. If the camera had zoomed in on the lobster to underline how ker-ay-zee it was, or there had been some dull pun, it would have ruined it. But no, just a lobster with a handgun, like it was the most ordinary thing in the world.

I had another laugh like this later on in the game when, after getting trounced by a pair of nunchuck-wielding carrier crabs, a screen casually asked me "would you like to request air support?". Well, yes, Fight Crab, what a polite question - of course I would. When I tried the fight again, it began with a pair of fighter jets strafing the opposing crabs at point-blank range, decimating both their health and my eardrums, and no more was said about it. Again, the understatement was the real artistry. If Fight Crab seemed at any moment like it was trying to be ZANY and WACKY, it would be a forgettable novelty at best. 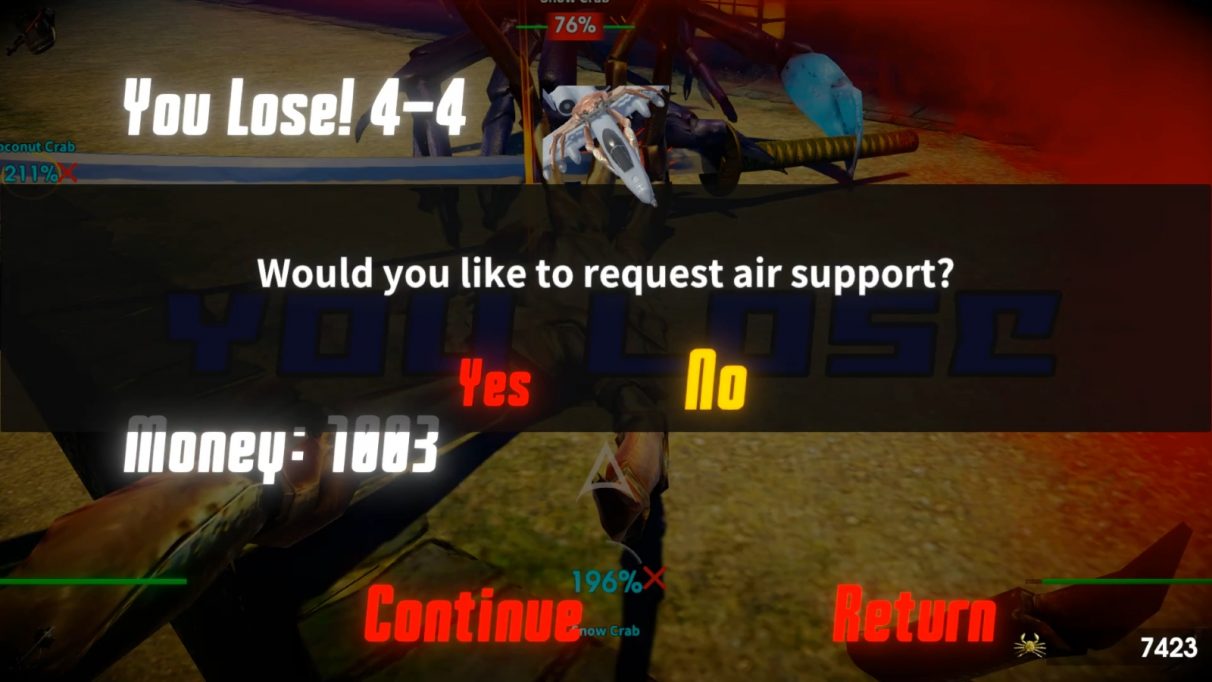 So, as a joke, Fight Crab is perfectly crafted. And it's a genuine love letter to the concept of crabs, which I can get behind. But is it, y'know, any good as a fighting game?

I have no idea.

The main reason for this is that, after a couple of hours of play, I started feeling a rising nausea, and had to stagger outside like a teenager after wolfing down a whole spliff, because I thought I was going to bark my yop. And while I can't be absolutely certain it wasn't something else, I'm fairly confident Fight Crab gave me actual sea sickness.

The fights, you see, are about tipping your enemies over onto what the game beautifully describes as their "cold, damp backs", and they work via the classic Smash Bros mechanic, wherein the more you damage them, the easier this is to achieve. Additionally, Fight Crab has a control scheme that has not been designed by humanity. I played it on an Xbox controller, as I'm fairly sure attempting it on mouse & keyboard would have shattered my mind, and the button layout was deeply, QWOPpily weird.

Each analog stick controlled a claw, with triggers punching, bumpers operating pincers, and the D-pad handling movement. Y activated an incredibly janky "wall run" ability, X and B threw the things held in the corresponding claws, and A did... something else. Oh, and the "back" button activated a baffling HYPER MODE which covered you in lightning, and let you fire laser beams with a special move that worked all the time, 60% of the time. Did you get all that? I certainly didn't.

I sincerely appreciated the creativity of it all. But realistically, all I could do most of the time was flail, mash, hope, and batter my enemies when they got stuck in the scenery. And in the course of my desperate struggle against the controls, I was forever swinging the camera around, in accordance with its own arcane command bindings. That was a little queasy in itself, but it was just the gravy on a mind-pummeling roast dinner of unpleasant sensations.

Even though most of Fight Crab's arenas are terrestrial (there's a human city, a medieval castle, a table at a Chinese restaurant... they're superb), everything moves in slow motion, like Kaiju fighting underwater. You're forever swaying, tipping and lurching, with your face pulled into a grimace and your thumbs going white as you will your crab not to topple, and a great deal of your attacks either lash hopelessly into thin air, or end up feebly caressing your foe like a punch thrown in an anxiety dream.

So: a camera that constantly spins and sways, fits of forehead-crunching concentration, a sensory environment dominated by blazing colours and pounding music, and - in my case at least - a horrific sound glitch that treated me to a constant, staccato rattle like I'd wedged a wooden moth in my ear. It's not hard to see why I ended up with my forehead to a cold brick wall, gasping for breath. And even if that had just been down to a bad pepperami at lunchtime, the fact remains that Fight Crab is something of an ordeal.

Had I possessed the constitution to play much more, I certainly would have laughed more, and I suspect one of two things might have happened in terms of my opinion of the fighting. On the one claw, I was already finding after two hours that the novelty of the "heh, it's crabs in a weird flailing sword fight" effect was fading. Without this, all that would have remained would have been pain. But on the other claw, I was also starting to see a surprising potential for tactical play.

As my crab levelled up, I could invest "money" in upgrading various physics-based variables, such as how fast the limbs swung, how heavy its body was, and so forth. Perhaps in time, I might have massaged these stats to mitigate the sheer frustration, and queasiness, of battle. Equally, advancement gave me access to a growing arsenal of weapons, all with an impressive range of stats. If I'd lasted long enough to achieve any sort of mastery over this decapod purgatory, perhaps those would have become more relevant.

Indeed, I was even given access to a sort of henchcrab, its type chosen from all the different crabs I'd unlocked (again, each with their own stats), who I could arm with weapons of my choosing to assist me in battle. Right before I crossed the hroop nausea horizon and had to book it outside, I'd started experimenting with a coconut crab armed with a hammer to use as a sort of tank, while I stood behind it with nunchucks DPS-ing the shit out of enemies. There's a lot of potential in that, for the strong of stomach.

And then, there's multiplayer. I didn't get to play against humans because I was playing before release, and so only had the campaign to work with. But that, I think, is where Fight Crab might come into its own. I'll leave that to you to decide, however. I have very emphatically hung up my fighting claws, and intend to appreciate Fight Crab in the same way I have appreciated it to date: as a sublime joke. Much like crabs themselves, I am tremendously glad this game exists, but it's something I'd rather appreciate at a distance.