There is a lot going on in Figment. It’s a ‘musical action-adventure game’ with combat, puzzle elements, cut scenes, voice acting and several musical boss battles. It’s visually busy, full of strange, warped objects and surrealist structures from Dali’s clocks to Magritte’s apples – the world of Figment is bright and lively.

But beneath all this, there’s the soundtrack, and Figment does something quite wonderful with it.

As you move around the game’s absurd, musical world, the soundtrack reacts to your movements. When you move past an instrument, such as a trombone house, that particular instrument becomes more prominent in the soundtrack and as you move away it fades out. When passing a lute sprouting from the ground, you hear some light guitar strumming, or when you have to run across clock face you can hear ticking noises that fit perfectly in time with the music.

My personal favourite is in ‘Clockwork Junction’ as you pass a piece of metal that has been bent into a spiral shape the soundtrack features a ‘twanging’ noise. When these tiny noises fit with the timing and rhythm of the music it's so satisfying to listen to. 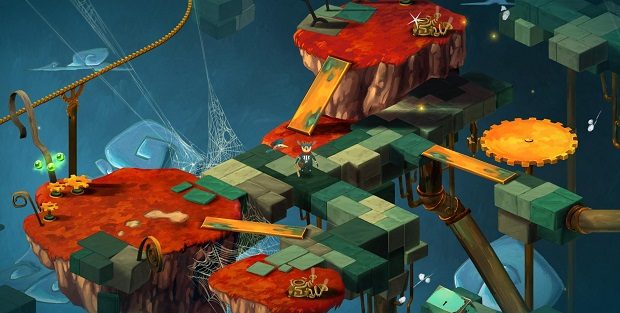 When you start in a new area, the music only consists of a base track and as you move through the level more musical layers are added to the score. Sounds and instruments are separated into layers and the game controls the volume of them in real-time, reacting to the player’s movements. These layers are then added or taken away depending on your interaction with the landscape. It’s a subtle and engaging feature that makes the soundtrack feel more integrated with the landscape and the world. Figment’s game developers, Bed Time Digital Games, have uploaded a short video that highlights the soundtrack’s effective layers:

Some of my other favourite uses of dynamic music from this year are NieR: Automata’s epic boss battle with the robot opera singer Beauvoir and basically Pyre’s whole soundtrack (watch Game Score Fanfare’s video about this over on YouTube, it’s amazing) but I particularly like its use in Figment because it fully commits to the fusion of landscape and soundtrack.

It’s no surprise that Niels Højgaard Sørensen is both Figment’s sound and game designer because the music and interactive elements interlock so strongly with each other. Even though Figment won’t be my game of the year (couldn't really get on board with fart cloud obstacles) I really enjoyed its playful interaction between landscape, music and player movement.