As in real life, there is nothing more desirable in Final Fantasy XIV than owning your own home. The plots for houses in the long-running MMO are limited and it can be a struggle to nab a space before other players, and housing is therefore an FFXIV player’s measure of in-game status.

There's another step beyond owning a house if you really want to show off, however: how you decorate that house. From bars, to modern living rooms, and even someone who managed to create a night sky in their basement, FFXIV's relatively basic housing tools can be bent or broken to create seemingly anything if you're patient and skilled. Or, if you've got the in-game currency to pay someone else to do it for you.

When I first spoke to Luthien, a teacher from the Netherlands during the day and an interior designer for hire in game, she was in the middle of making Hogwarts castle inside someone’s house. 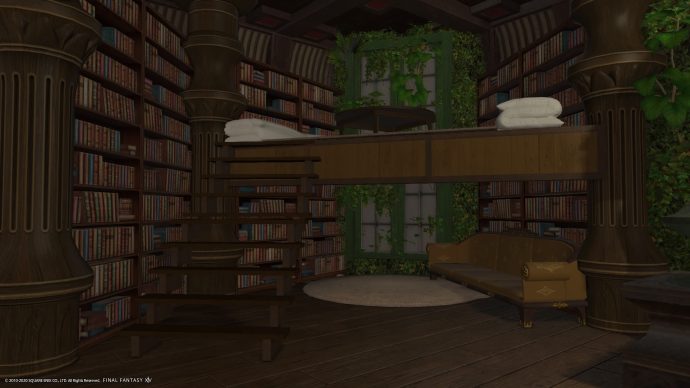 Luthien is one of a small handful of players who sells her design skills to other players for millions of gil, the in-game currency. Her work takes days to complete. I asked her what the most important element was when creating a good house design, and she emphasised the need for patience.

"In game, you are in some way held back by the housing items that are available," she says. "For example, I’m recreating Hogwarts castle, and one part of this design is the famous staircase to Dumbledore’s office that is blocked by a gargoyle. Well, obviously this isn’t available in game. You now need to come up with items that could serve as a small part of the thing you are trying to build - think of items as Lego. When you find all of the individual parts, you are going to glitch them into the right position to make a whole new item yourself. 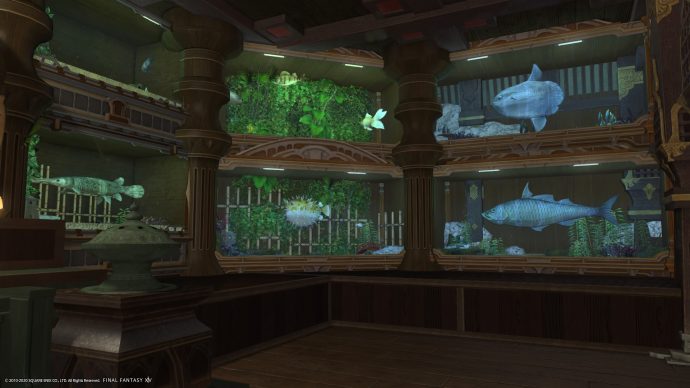 Glitching is a huge part of an interior designer's skillset in FFXIV and one that Square Enix quietly turns a blind eye to. The results can be miraculous. It involves using partitions and other items to float things into positions they normally couldn’t rest at, or getting them to clip into each other to look like something else entirely. It’s a fiddly process, but it’s the only way to get items like beds onto lofts and plants onto surfaces that don’t normally register as shelves. Or to make gargoyles that block staircases.

"This is where patience comes in," says Luthien. "From the top of my head, I think my statue consists of 12 other items glitched together as one, which can really take some time to get right."

If you want to see the kinds of results glitching can produce, spend some time browsing Housing Snap. The Japanese website hosts photo sets of player's homes and some of them are stunning for their lavishness and complexity. They put some real world Instagrammers to shame.

Luthien doesn't want to overemphasise the importance of fancy glitching, however. "In my opinion the feeling of a room is even more important," she says. "I can say I'm pretty good at glitching and making items, and doing some difficult glitching could impress people with your design, but i think that's wrong. I've seen a lot of nice houses by people who don't know how to glitch in the slightest, and it's because of the feeling you envision for a room. Some houses just feel really good and I really like it regardless of how ‘special’ a design was." 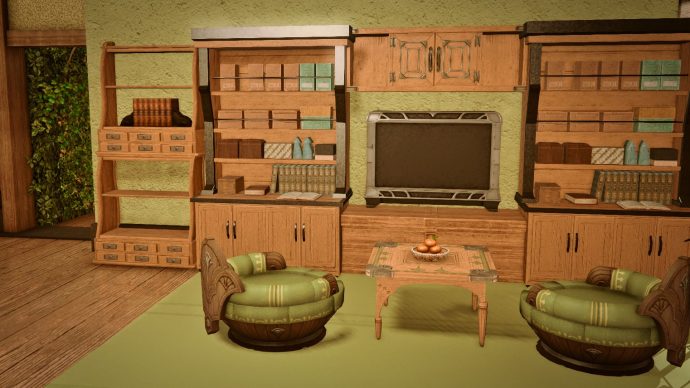 Moogie, a prominent FFXIV fan artist and decorator, agrees. When I ask her for interior design tips, she highlights fundamentals of design over technical wizardry.

"Like [when] making art, the focal point is very important," says Moogie. "Try to locate the point you want the viewers to focus on first by not putting too many stand-out objects around the zone as they might distract the eyes. Then you can lead their gaze further to other zones - lighting will play an important role here."

My in-game house is already a point of pride. It may have a giant monkey/hamster face on it and be the smallest possible size, but I love it. I moved from a big server to a small one just to be able to buy it, as it was the only server that still had plots available. I gave up friends for my house, that’s how big of a deal it is. I like to keep it cosy, but armed with tips from the experts, I decided to try for a higher level of design by starting small and giving my bathroom a makeover. 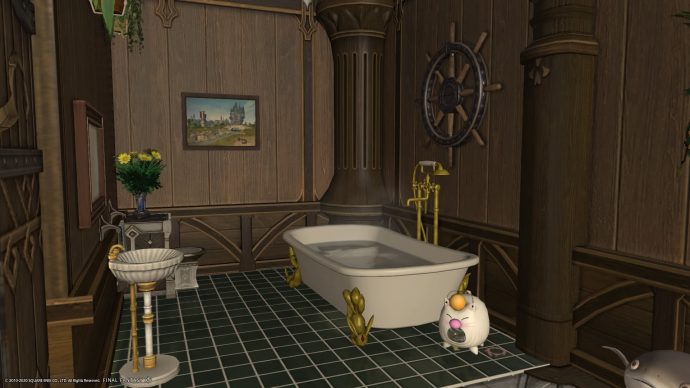 I picked out a dark green for the floor tiles rather than leaving it the default colour I had before, added a few lamps, and repurposed a blank picture frame as a mirror. To complete my suite I needed a toilet, but with none available in game I would have to craft my own from a cabinet and a stool.

Trying to make something for myself quickly gave me a new appreciation for the work of FFXIV’s cabal of interior designers. Even simple objects take time and experimentation. I needed just the right kind of cabinet to turn into my toilet, one that wasn’t too tall or wide, and so I had to source it either by buying it off the marketplace or teleporting to a specific NPC to find it. The stool then needed to be crafted, which involves levelling up a carpenter (which I had mercifully done already), and then I had to find just the right shade of white to make it actually look like a porcelain throne.

It took me 30 minutes of sourcing and tweaking the position of each item just to make a simple toilet. I had hoped to do my whole cottage like this in an afternoon, but Luthien’s advice about needing patience rang in my head. I think I’ll start saving up my gil to hire her instead.