Few games make patch day feel even half as momentous as Final Fantasy XIV: A Realm Reborn. In-between each major expansion, the MMORPG receives five massive episodic updates bridging between story arcs, adding new features, dungeons and more, each accompanied by a dramatic trailer and a novella's worth of patch notes.

The third episode of this season was officially unveiled today. Due for launch on May 22nd, Under The Moonlight (aka Patch 4.3) is going heavy on the politics, as Doma negotiates to free its people from the Garlean empire through a prisoner exchange. There's still time for side-stories, as the Ivalice arc (guest-directed by Yasumi Matsuno) continues to explore the world shared by FF Tactics and FFXII.

While normally FFXIV update trailers feel more like a dramatic feature-list, Under The Moonlight's focus is squarely on the main story. Expect a lot of samurai/ninja-themed drama, all delivered through conspicuously British actors. The Ivalice arc returns (with its concluding chapter due in Patch 4.5), with 24 players ascending a massive tower in the heart of the Dalamascan desert. There's also a new 4-player dungeon - The Swallow's Compass - set high in the eastern mountains, featuring a Tengu among its procession of bosses, as well as a very swanky looking set of armour to be earned there.

For those who like to spend their time chatting as they craft, Under The Moonlight is introducing a little bit more non-combat gameplay. Crafters will now find a new range of delivery-type missions available from Kurenai, who has big ambitions for the future that require a lot of resources. For those aiming to see a more immediate return on their material donations, you'll also be able to expand and improve the new Doman settlement by giving them construction materials.

Under The Moonlight is also set to bring some nice quality-of-life improvements. The recently added Glamour system (allowing you to easily and permanently convert equipment into cosmetic costume pieces) is being expanded further, allowing more types of items to be put in your dresser and also offering the option to turn converted items back into usable equipment. The fun but under-populated Chocobo Racing and Lord of Verminion minigames are also being added to the Duty Finder screen, letting you passively queue for them as easily as you would for a dungeon run. 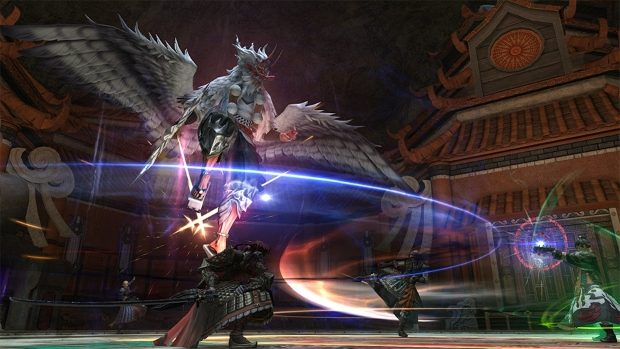 While the game still divides players across server lines, so long as your friends share a regional data center you'll be able to keep groups together. The new update is expanding Linkshell chat to allow cross-server communication. Logical, given that you could already form dungeon parties cross-server. More passively, home-owners will now be able to place a guestbook for curious visitors to scribble in. Quite why you'd want to have random internet strangers write things in your house is beyond me, but FFXIV's community does feel more civil than most.

And that's just the stuff that's been revealed so far. Still greyed out on the official Patch 4.3 page are sections on a new Trial boss fight, a new 'Ultimate' difficulty Minstrel's Ballad, a new Beast Tribe to pal around with and do side-quests for, and (of course) more slapstick antics with Hildibrand and co. There's also expansions coming to the roguelike Deep Dungeon mode, plus a new zone to explore in The Forbidden Land, the recently added co-op endgame hunting ground.