If the humor of Psychonauts, the mechanics of Paper Mario, and the wacky, noodly designs of Dr. Seuss had a love child, I think it’d look a lot like Flipping Death. A platformer, puzzle, and adventure game all in one (to various success), the developers have been so inspired by Tim Schafer's work over the years that Double Fine Productions are thanked in its credits. Flipping Death shares a lot of the same comedic style as Double Fine games, but Zoink Games carve a name for themselves in their commitment to Flipping Death’s aesthetic (one established in 2013's Stick It To The Man).

In Flipping Death’s first few moments, its narrator sets the tone for its macabre brand of comedy when, sure enough, the protagonist’s demise acts as one of the game’s first gags. “Thank you for playing. There is no moral,” the narrator of Flipping Death informed me after I accidentally led Flatwood Peaks’ resident goth, Penny, to her doom. After she wakes up on the spirit-laden and incredibly literal “Otherside,” Penny gets mistaken for the Grim Reaper’s temporary replacement, and soon finds herself armed with his infamous scythe. As she helps the spirits with their unsolved mysteries, reconnecting star-crossed lovers and uncovering murder plots, she searches for ways to return to her body, which has started showing some concerning signs of life - and not her own. 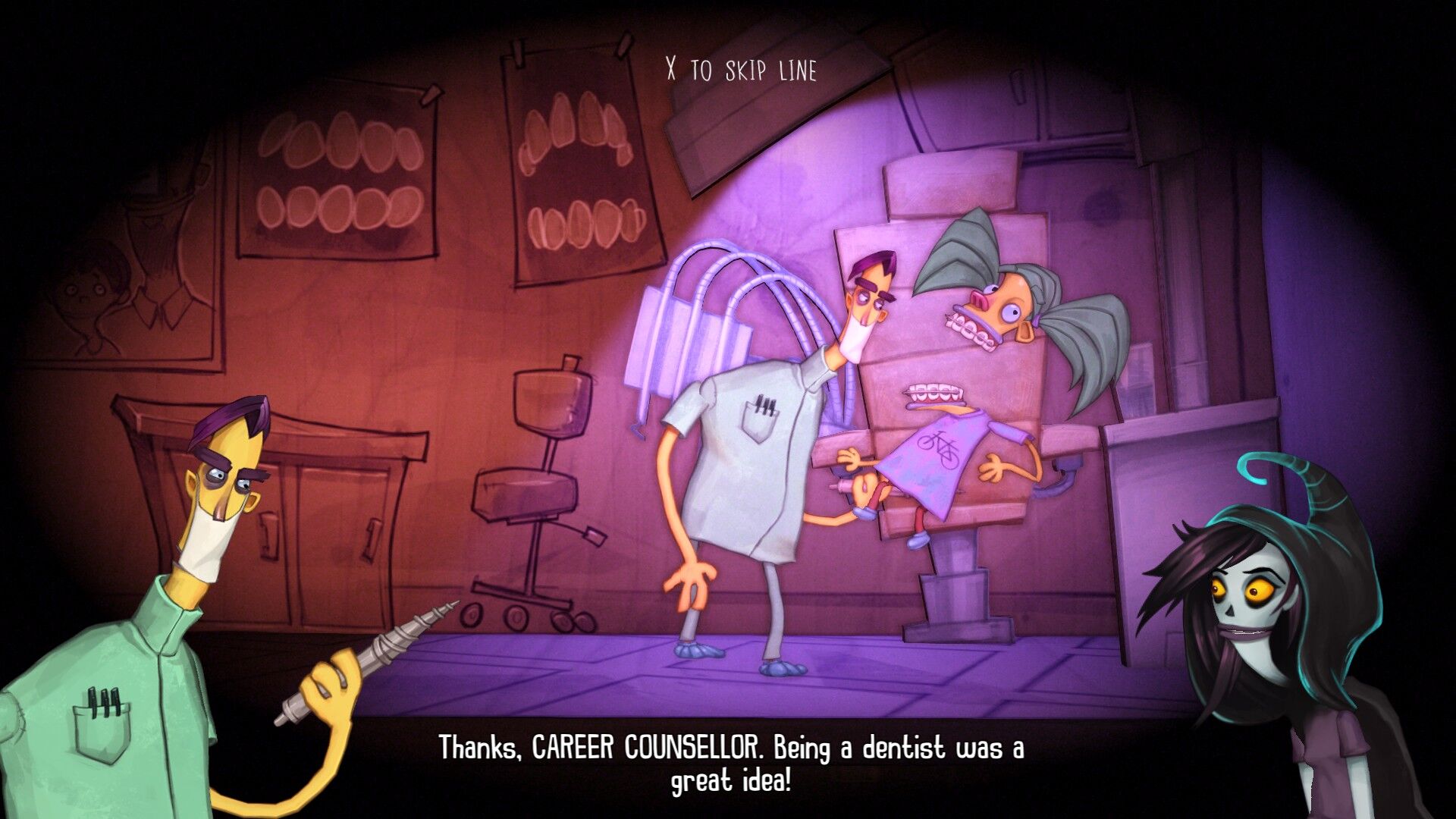 Much of the Otherside’s terrain is broken up by platforms and vicious creatures you need to avoid. This is expedited by an ability to teleport to wherever you throw the Grim Reaper’s scythe, whisking you to high-up areas and out of harm’s reach in a second. On top of that, collecting enough of the chittering souls flying around allows you to possess the living, flipping back over the town of Flatwood Peaks in your new host. Only through exploring and influencing the realm of the living can you hope to solve the problems of the dead.

But controlling both the living and Penny’s new undead form can be difficult, and it often seems like Flipping Death’s controls were built more for humour than precision. The character’s goofy, stretched-out limbs look every bit as awkward to live with as they were to control, and while platforming as everything from a wolf to an alien was hilarious, they all had sprawling limbs that were hard to tame for more decisive moments.

The imprecise controls prove especially troublesome in solving certain puzzles. In one instance, I had to hit a flying bowling ball at precisely the right angle to send it hurtling into a window. After struggling with the wonky physics for a good 10 minutes, I started to wonder, erroneously, if I’d reached the wrong solution. You’re given the freedom to roam on your quests, but it can be tricky figuring out which tasks to complete in the required order and completing a chapter often involves a lot of backtracking, wonky physics and all. Hints are available, but they only provide a visual clue, so if you haven’t set up enough elements to realise what it’s pointing to you’re left to wander. 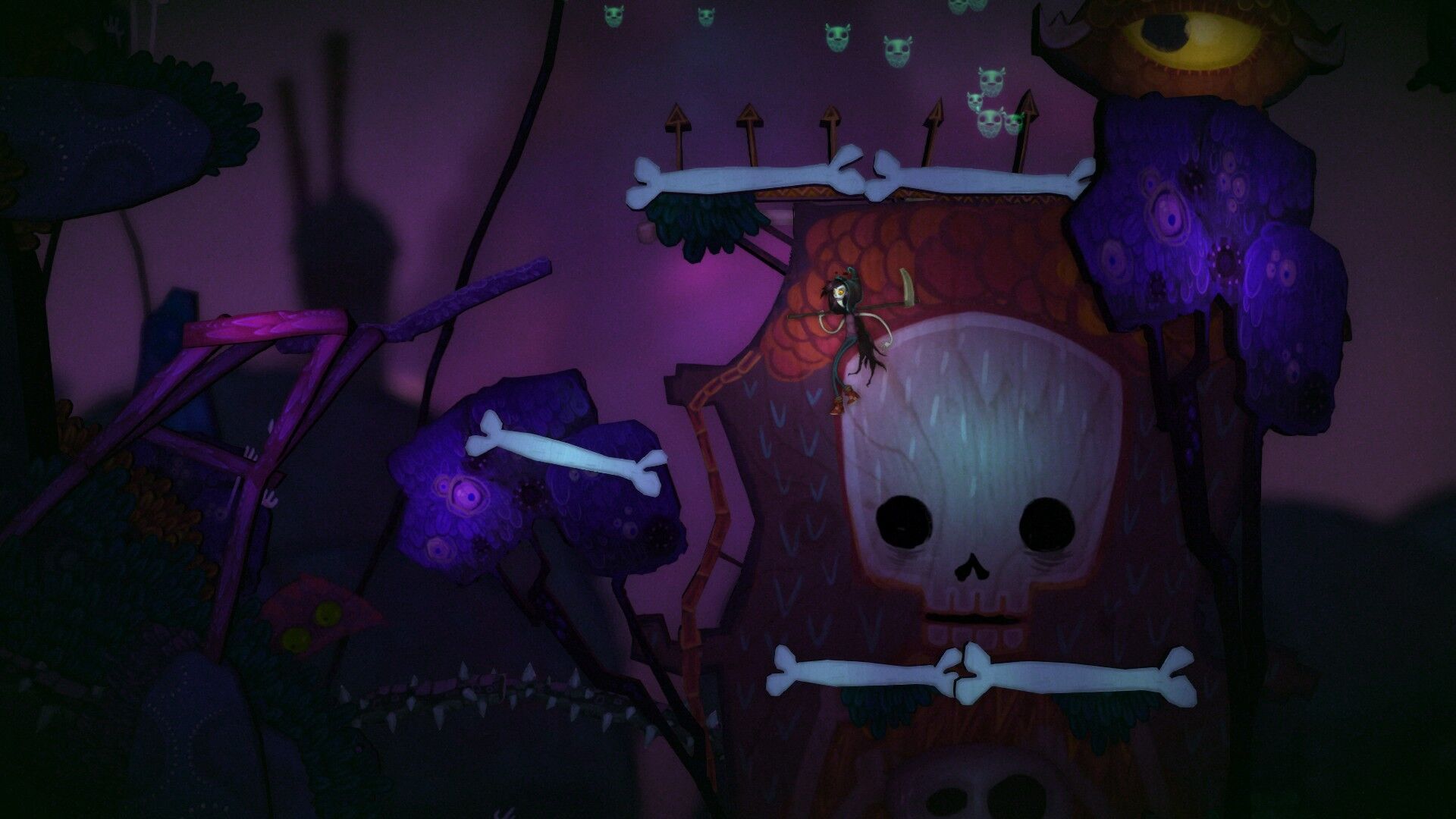 Flipping Death, despite its namesake, doesn’t actually involve a lot of death as far as Penny’s concerned (well, other than that first decisive one). Getting hurt costs you some of your souls, but they’re easy enough to collect again, and constantly replenish in the environment. There’s not much of a fail state in the realm of the living either. If you mess things up, you’re free to try and try again, which is a boon considering some of the puzzles can be a little obtuse, and there’s no way to manually save your progress.

But this lack of consequence encourages you to further explore Flatwood Peaks, every nook and cranny of which is stuffed to the brim with vibrancy and character. The ability to flip between both worlds is reflected perfectly in its 2D-to-2.5D paper-doll art style, where everything from the town to the inhabitants themselves seems découpaged upon a canvas. Characters even “flip” themselves when they turn, revealing their flat, 2D side for a moment so as not to break the illusion.

And if it weren’t for Flipping Death’s warped and wacky aesthetic, its colorful cast of characters might seem a bit out of place; as it is, they feel perfectly at home. There’s the lumberjack haunted by a secret love of romance novels, a mermaid obsessed with chainsaws, and, of course, Poke-man, the superhero with the power to, well, poke things. Possessing them lets you read their thoughts, pausing the action for a bit, but funny enough to be worth the time. They also babble to themselves as you take a stroll in their bodies, even commenting on their lack of control. 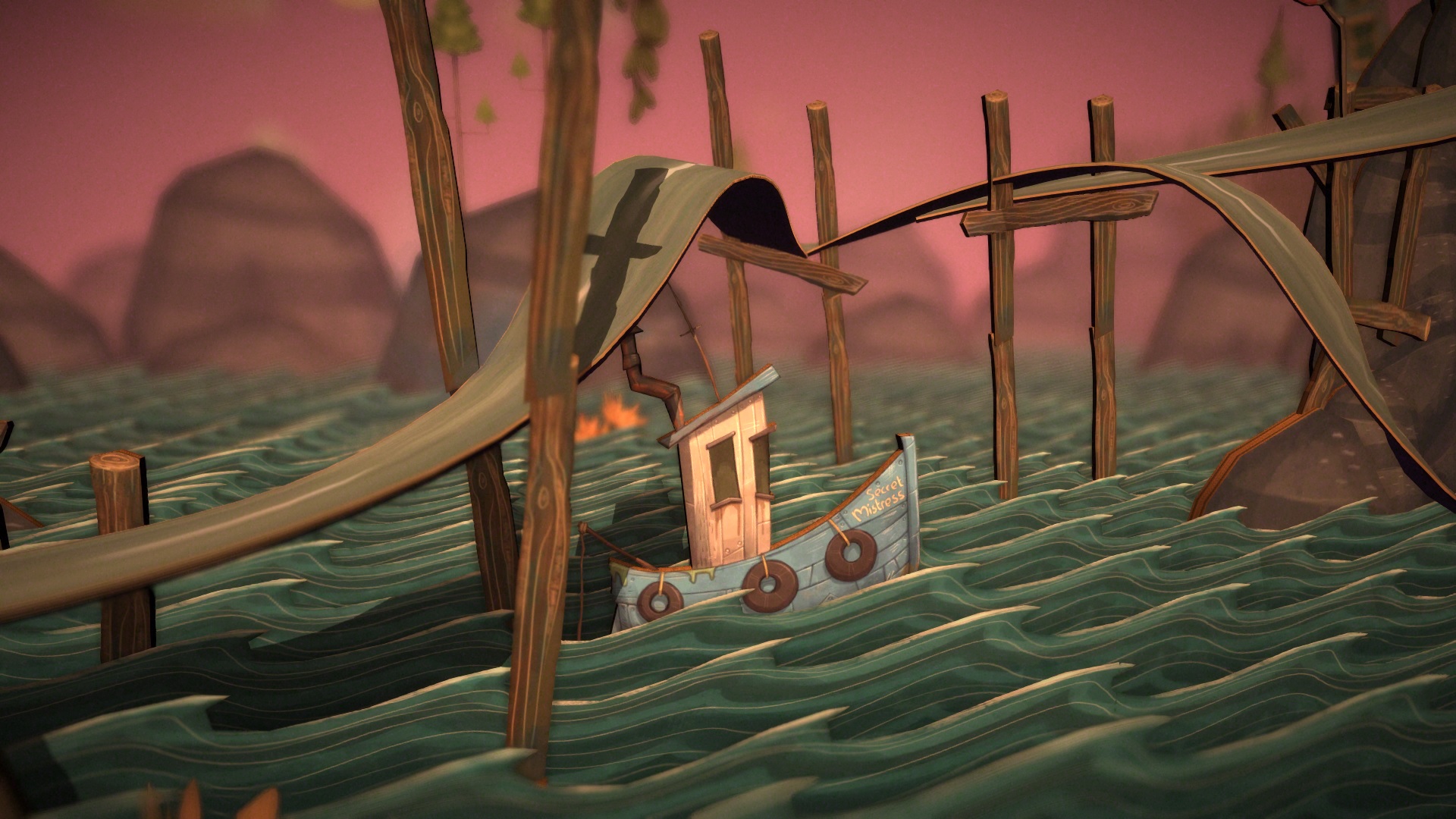 Flipping Death’s eight chapters all take place in Flatwood Peaks, with each adding more details and levels until the map is etched in your brain as if you lived there yourself. This experience builds into your exploration of the Otherside, too, such as tombstones in Flatwood Peaks foreshadowing ghosts you meet. Sometimes things fall to pieces at the seams a bit, with assets clipping on the environment and lip syncing that doesn’t quite work, but the blips are easy to forgive and forget with how downright charming Flipping Death’s look is.

Unfortunately with comedies, sometimes too much of a good thing can begin to feel like, well, too much of a good thing, and Flipping Death flirts with overstaying its welcome about three quarters in. While progressing may reveal new areas of Flatwood Peaks, you’re still dealing with largely the same cast, all of whom reset to their first positions at the start of each chapter. Hearing the same lines five or six times over gets old pretty fast, no matter how funny they were to start with. Despite Flatwood Peaks’ charm, Navigating the same environment time and time again also grows stale, compounded by the lack of direction you receive at each chapter’s start. 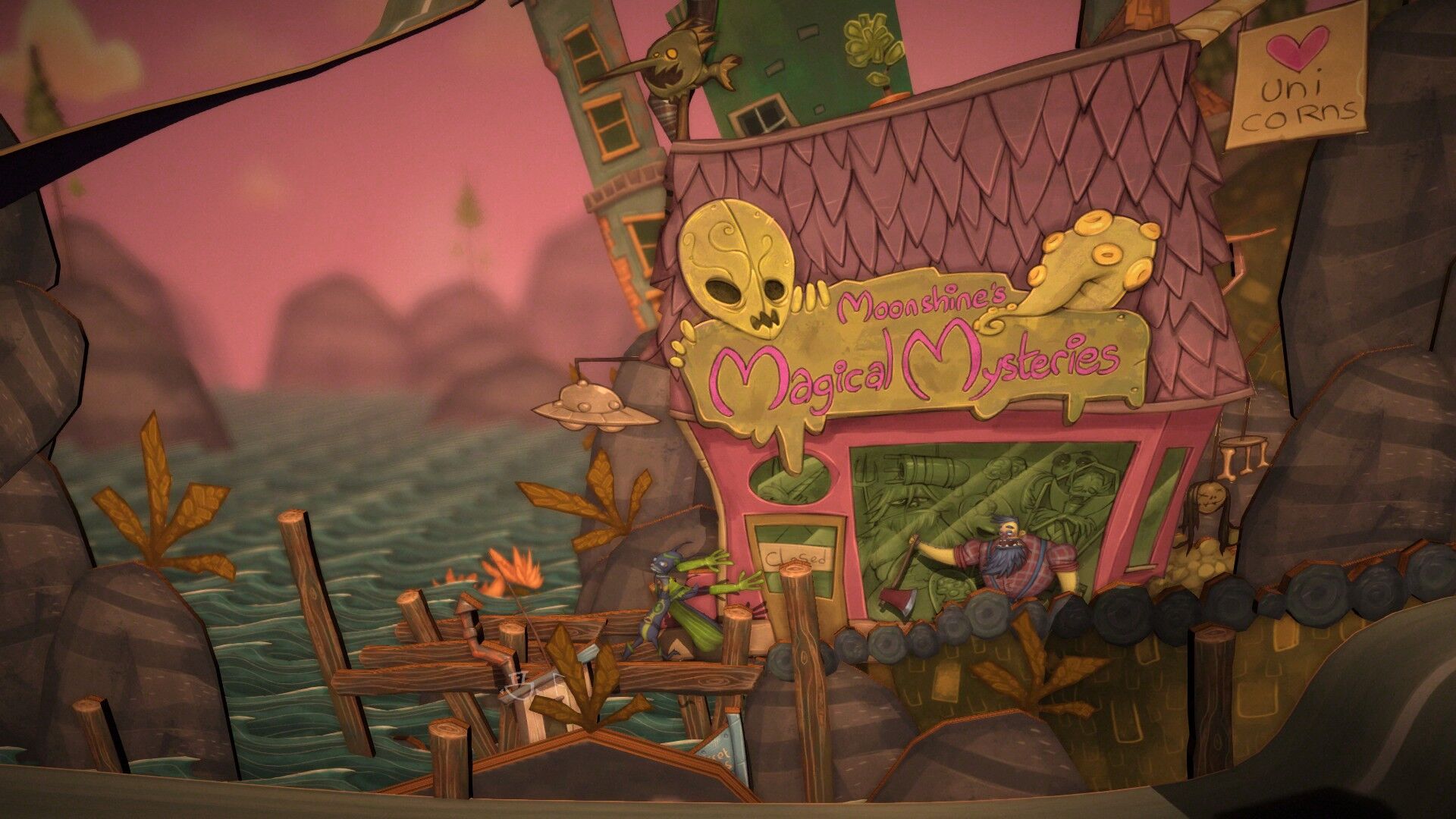 Where Flipping Death does shake up its formula, however, is in its final showdown. Though basically a thinly veiled fetch quest, the battle builds on the game’s platforming and ramps up the enemy challenge. All the while, the characters you’ve met up to this point are commenting on your progress and interacting with one another in new combinations, often to hilarious ends. It’s a breath of fresh air for a game that had begun to feel repetitive; I just wish it’d reached this crescendo about two chapters earlier.

Still, there are worse fates than overexposure to Flipping Death’s fantastic writing and loveable art. And even with my frustrations, I find myself tempted to go back and complete more of the game’s side challenges, especially because the rewards for them, character cards with funny factoids about the cast, crack me up.

Despite some wonky physics, Flipping Death melds its platforming and puzzle elements seamlessly enough leave fans of both genres at least satisfied (though it's more puzzle than platform). But the unique art style and comedic punches are what ultimately enticed me to stay in Flatwood Peaks a while longer. It’s a town with a life of its own, even - or perhaps especially - in death.