“When you’re working on annual iterative titles, it is difficult,” says Miles Jacobson, Studio Director at Sports Interactive. “You’re always going to get people turning around saying ‘you haven’t added anything.’ And no matter how much you add, you’re still going to get people saying that.”

That’s the challenge that the Football Manager series faces every year. It remains, as it always will be, a game about being a football manager. It will always be about selecting a team to manage, creating tactical systems, crafting squads of players and sending them out onto virtual pitches in the pursuit of glory. And it will always, to quote SI’s Director of Development Marc Duffy, aim to achieve “suspension of disbelief” in the player’s mind.

The question then, as with all annual series, is the extent to which the game advances on its predecessors. In the case of Football Manager 2019, the studio is bullish about their ambitions for this year’s release.

“We are more than a little bit determined to not be releasing something great this year,” said Jacobson. “We’re wanting to release something exceptional.”

Having gone hands on with the game for two hours, that confidence seems well placed. While FM19 quickly gets you in the usual management groove, its major changes adjust the formula in a meaningful manner. 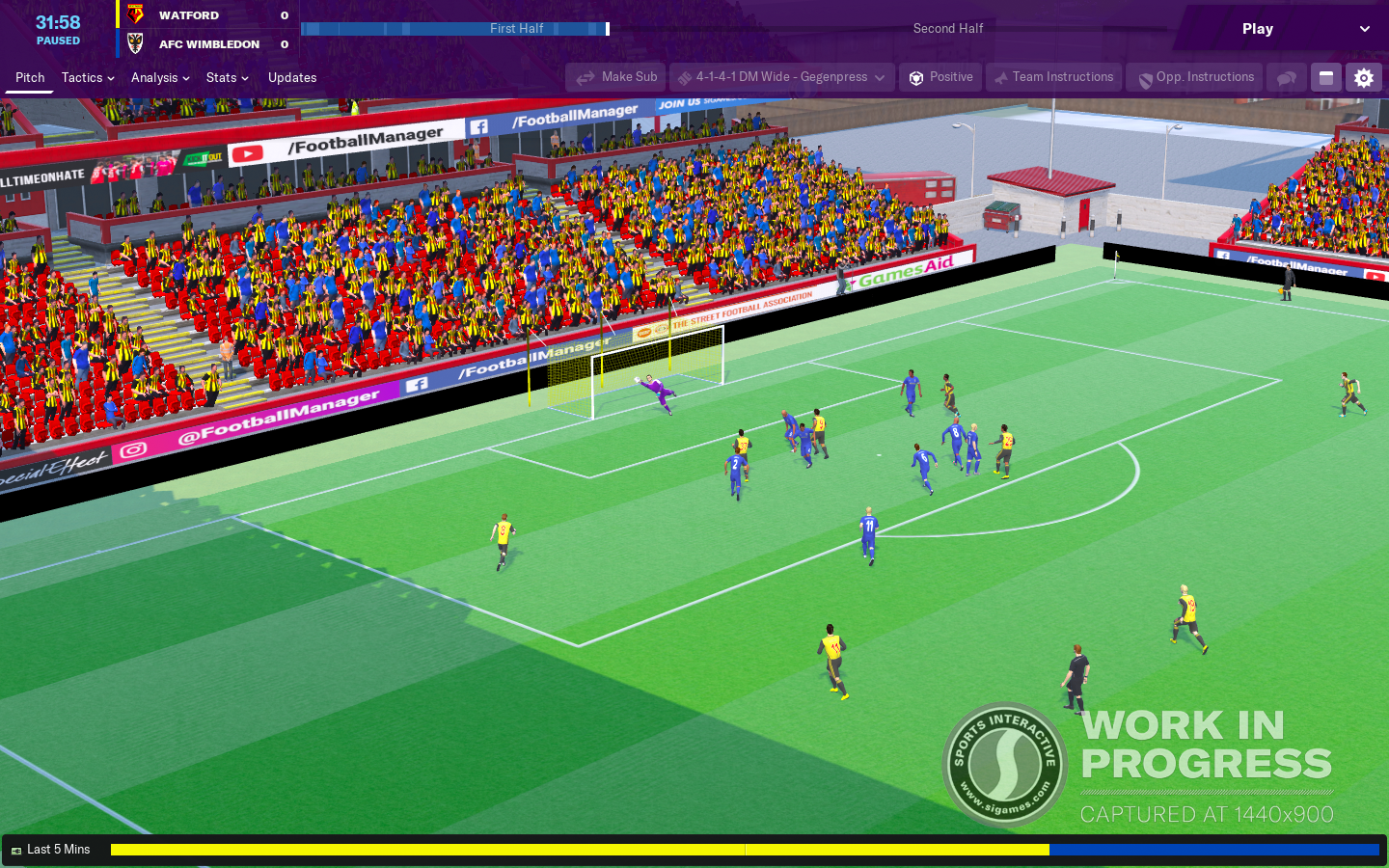 On the face of it, FM19 doesn’t necessarily feel that different to previous entries in the series. Though the game sports a new brand and a nice shade of purple throughout its UI, the game feels rhythmically similar to its predecessors.

Your central interactions with the game remains managing an inbox, diving in and out of menus and entering virtual matches. Though the menus have had a facelift, the majority of them operate – for the most part – in much the same way as they always have done. And while there are tweaks to the 3D match engine to improve the quality of hundreds of player animations, I didn’t notice a distinct visual step up in the quality of the game.

Yet upon playing it for longer, the changes made to FM19 from its predecessor increasingly assert themselves on the experience. In particular, three major feature updates disrupt the usual save rhythm in a welcome manner.

First, FM19 features a brand new tutorial system that should make the game much more accessible to new players.
Sports Interactive call these inductions and they provide a guided route through each of the core in game menus. For example, the scouting menu induction runs you through how to find new players, shows you where to find relevant information on new signings and then asks whether you want to manage the process or to leave it to your team. It’s quick, it’s methodical and, importantly, it gives the 40% of new players who get the game each year a fighting chance to get to grips with it.

For dedicated fans of the series who don’t need to be shown around the place, the second major feature update is a welcome overhaul of a much maligned section of the game. Training has been transformed from a simplistic system to a detailed scheduling system designed to reward managers who go deep into its mechanics. 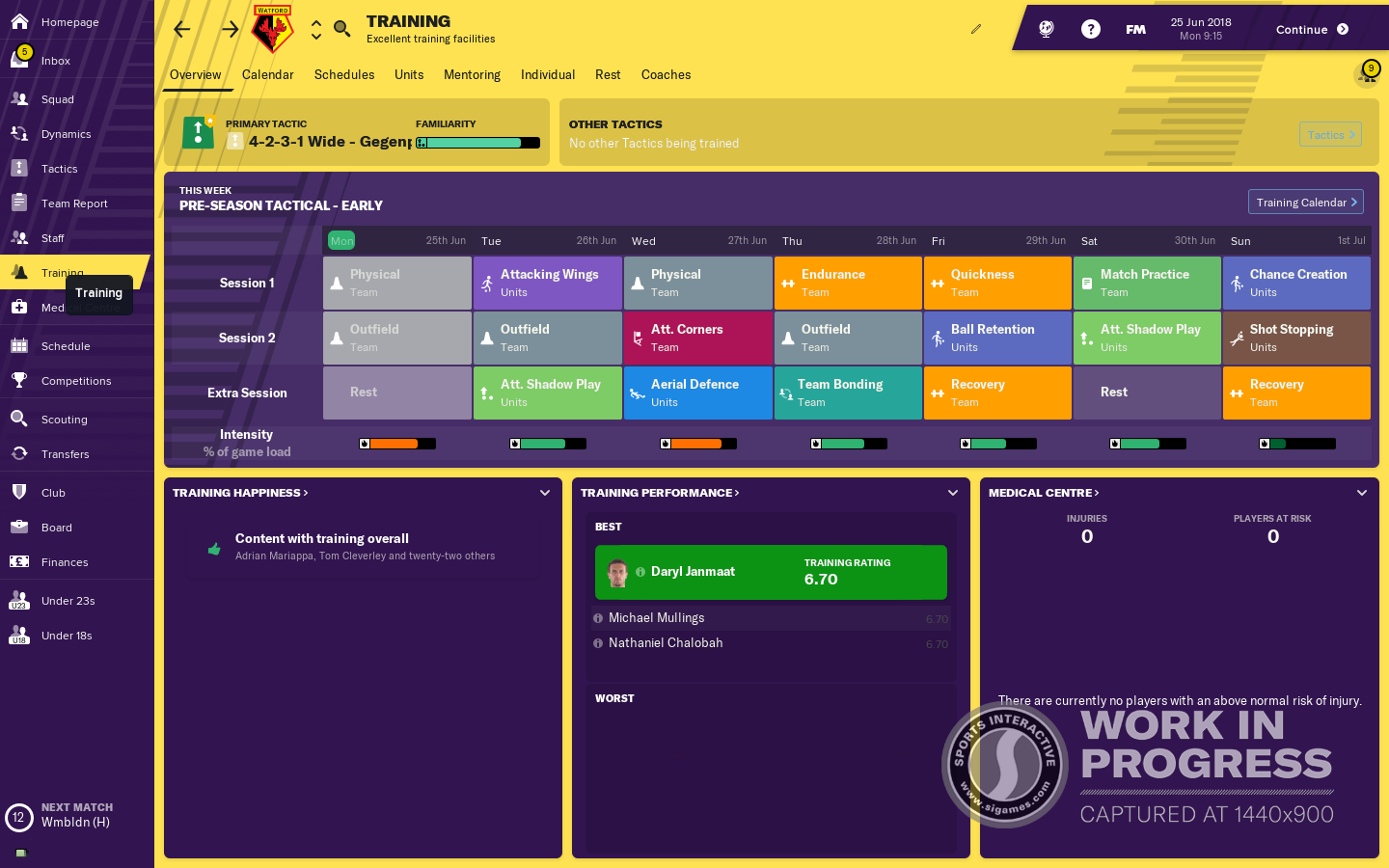 Rather than setting a weekly and pre-match focus, managers are now able to schedule 40 different training modules into three training slots per day. Each module provides boosts to different attributes with differing costs to your team.

For example physical conditioning sessions will boost your player’s physical attributes at a cost to their energy levels, while a community day won’t boost on the pitch stats but will boost cohesion. This makes you think carefully about how – and why – you put together a schedule.

In my preview save with Mainz, I was adapting the default training schedule to focus on fitness, team cohesion and tactical understanding to help the team adapt to my demanding counter pressing approach. This was appropriate for pre-season and worked well. But I was already thinking about how I’d shift out of intense fitness work as soon as the season started to avoid burning out, suggesting the training system has a big role to play in shaping your season.

Finally, FM2019’s most important change is to the way you construct tactics. Instead of being handed a blank tactics board and being left to your own devices, the game helps you build the right system for your team from the outset.

First off, it allows you to select a tactical philosophy to drive the creation process. The list of presets, which includes from tiki-taka, gegenpressing, catenaccio and more, pre-selects team instructions, suggests best formations and then allows you to tinker with what it has suggested to create your own system. This makes it much easier to turn the thought of “this is how I want to play”, while still offering a “blank slate” option for experienced managers to dive onto.

Second, and most importantly, the game splinters the tactics board into three separate sections. Instead of having a single shape and a single set of team instructions, managers must now set their instructions for how their teams play with the ball, without it and in the transition phase. 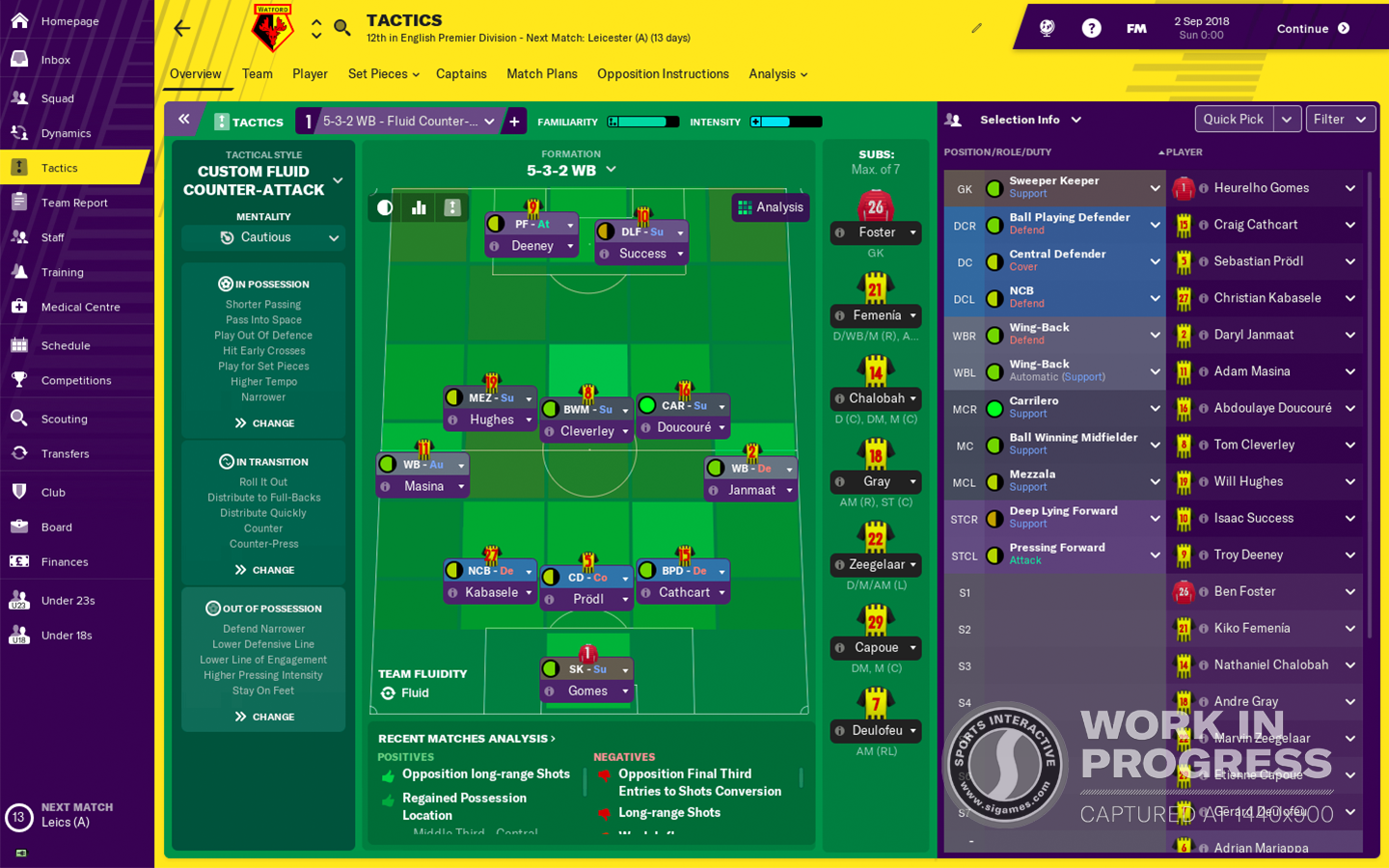 By allowing players to make decisions on whether their team counter presses or drops deep on the transition, on where to set the defensive line and the line of engagement and to vary significantly how a system works in and out of play, the new approach rewards deeper tactical thinking.

For example, I set up a gegenpressing system with Mainz using the presets. But I increased my team’s width in attack to benefit our wingers, while narrowing it in defence to compress the space. This helped us create plenty of chances when shifting from defence to attack, allowing us to snap the ball off a panicking defence and quickly distribute wide for a cross.

This staggered tactical approach is a significant change to the FM formula. Not only does it offer greater control and flexibility for managers, it brings the game’s tactical system in line with contemporary football thinking. While researcher Stephen Davidson told us in a session about constructing the FM database that “its only agenda is accuracy,” the same now applies to the fluid construction of tactical systems and it is to the benefit of the overall playing system.

As a result of these three changes, FM19 appears to add extra depth and some much needed accessibility to what's otherwise thoroughly familiar. 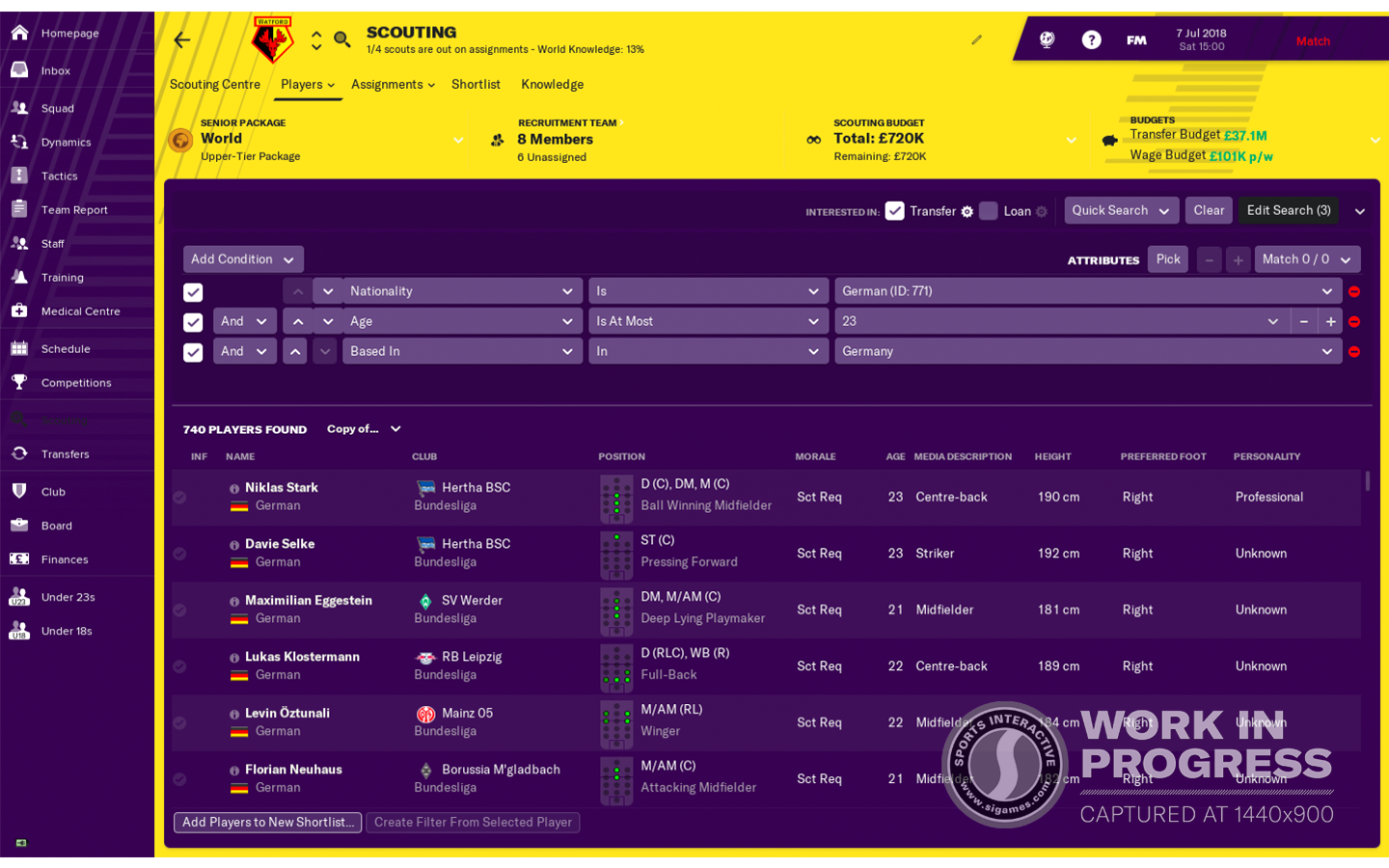 This seems even truer across the wide range of quality-of-life improvements. The addition of the Bundesliga license brings a popular FM league choice to life. Small changes to the UI – such as adding in-depth data to scouting cards – provides more information while saving clicks. There are even a few bones thrown to long-term fans of the series, including the partial return of sliders to the tactical menu screen.

This isn’t to say that there isn’t still room for improvement. Press conferences, for example, remain mostly tedious exercises in answering the same questions with the same answers. Securing the license for German leagues has made absences elsewhere more noticeable. And while the game does teach new players its secrets more effectively, it will still proceed to pummel you into submission without a moment’s notice.

Based on my short time with it though, FM19 feels as if it could be a confident step forward. The question is whether it can retain that freshness after dozens or hundreds of hours of play.