An iceberg has smashed into Fortnite Battle Royale, freezing over a big corner of the island and kicking off the free-to-play shooter's Season 7. One corner of the island is now covered in snow and ice, with ziplines running between peaks, and chuffing flyable warplanes are buzzing around its skies. Today also brings the debut of Fortnite Creative, a mode based on Battle Royale's Playground but expanded with persistent saves and more features to build playgrounds and minigames and things. That's initially exclusive to people who buy the free-to-play game's latest Battle Pass, but will open up to the hoi polloi next week.

The snowy biome has swamped the southwestern corner of the island, reworking the landscape and changing locations. Wee expedition bases have popped up to observe and explore it, with ziplines running around peaks to help people get up high and down low. Epic call them "ziplines" but they're actually horrifying giant magnets which hold our heads in a magnetic field. I feel like it could pop right off. 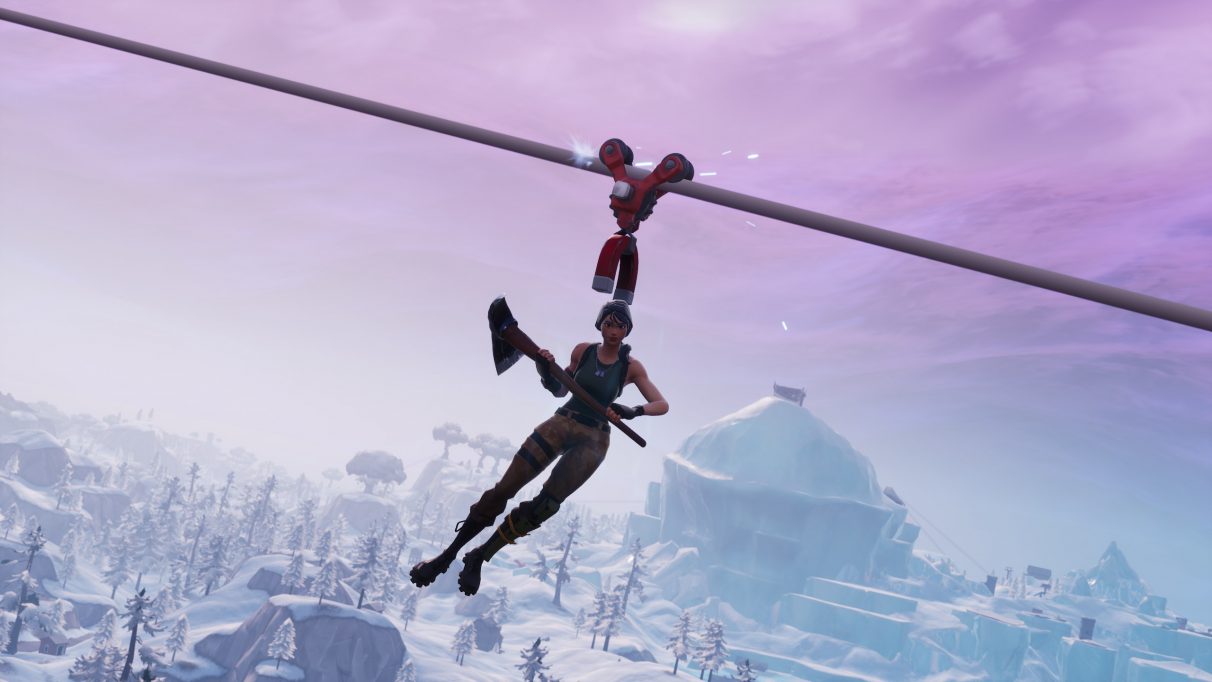 Beyond iceland, many houses across the island are celebrating Christmas with lights and ornaments and things. It's nice. Oh, and obvs those planes are now in, able to hold up to five players (with four on the wings) and zooming around with a boost ability and machineguns. Preliminary dogfights I've engaged in have been a shambles for all pilots involved but I trust some players will get terrifyingly good at strafing runs.

We say goodbye to several weapons and items for season 7 too. Epic have put the Shadow Stones, Port-a-Fort, Chiller, Clinger, Double Barrel Shotgun, and Shockwave Grenade in the vault, from which items have returned before but might just stay forever.

A new season means a new Battle Pass, and as ever this one costs 950 V-Bucks (about £8 in real money) and offers a progression track to unlock new outfits, emotes, and other cosmetic doodads. Plus it gives early access to Creative. That's due to launch next Wednesday, December 13th, for everyone but Battle Pass holders can start now.

The most fascinating part of Creative is that Epic's Creative code of conduct insists that players "Use official Fortnite names for all weapons, Outfits, Points of Interest, and items." So the rifle clearly based on the FN SCAR made for US special forces isn't a SCAR at all, okay, it's an 'Assault Rifle'. The FAMAS used by the French military is actually a 'Burst Assault Rifle', you understand. And the FN P90 is a 'Compact SMG', right? And of course the Heckler & Koch MP5 is really a 'Submachine Gun'. And there's no way the pistol which copies the Desert Eagle should be called a Desert Eagle when it's obviously a 'Hand Cannon'. Same goes for the SPAS-12 and the AWP and the Milkor MGL and the M202 FLASH and the Barrett M82 and the...

I've said for ages that it's weird Epic are using real-world weapons in a goofy cartoon game for children, and perhaps they're starting to realise that too. Baffling unenforceable rules wouldn't be the best way to change that, mind.

Epic have been in the news a whole lot this week, between their new game store and this Fortnite update and and someone planning to sue them over a Fortnite dance and cutting off Unreal Tournament, and we may not be out of the SpeedTree woods yet. Epic had planned to announce something Fortnite during The Game Awards tonight. When word of Fortnite Creative leaked early, it seemed maybe that was the surprise blown, but now Creative is already live for some folks maybe they still have more to come? Unless giving it to Pass owners now was a last-minute decision after the leak blew the surprise? We'll see tonight. Or tomorrow morning, as The Game Awards start at 1:30am on Friday and oh why did I volunteer to be the one staying up for them for RPS.