I know that many readers will have been anxiously awaiting news of Aliceburg, the scenic seaside village that I have been growing in lovely medieval city-builder Foundation, particularly since the Great Accidental Bread Famine of Winter 2019. At this point, it is on the verge of becoming one of my favourite games of all time, full stop, and it's not far off getting a sexy new UI update that I can show you.

The tidings I bring today are mixed, though, because Foundation recently had another huge update to its early access build. V1.6 has made many small but significant changes (including large piles of rocks), and Aliceburg has become a bit borked as a result, especially now that Foundation has some tutorialising and quests to teach you how to build a city properly. Last time, I spoke of one day abandoning Aliceburg as if it were a long way off, but I am afraid that the day is now. Scenic Aliceburg is dead; long live scenic Alvania! 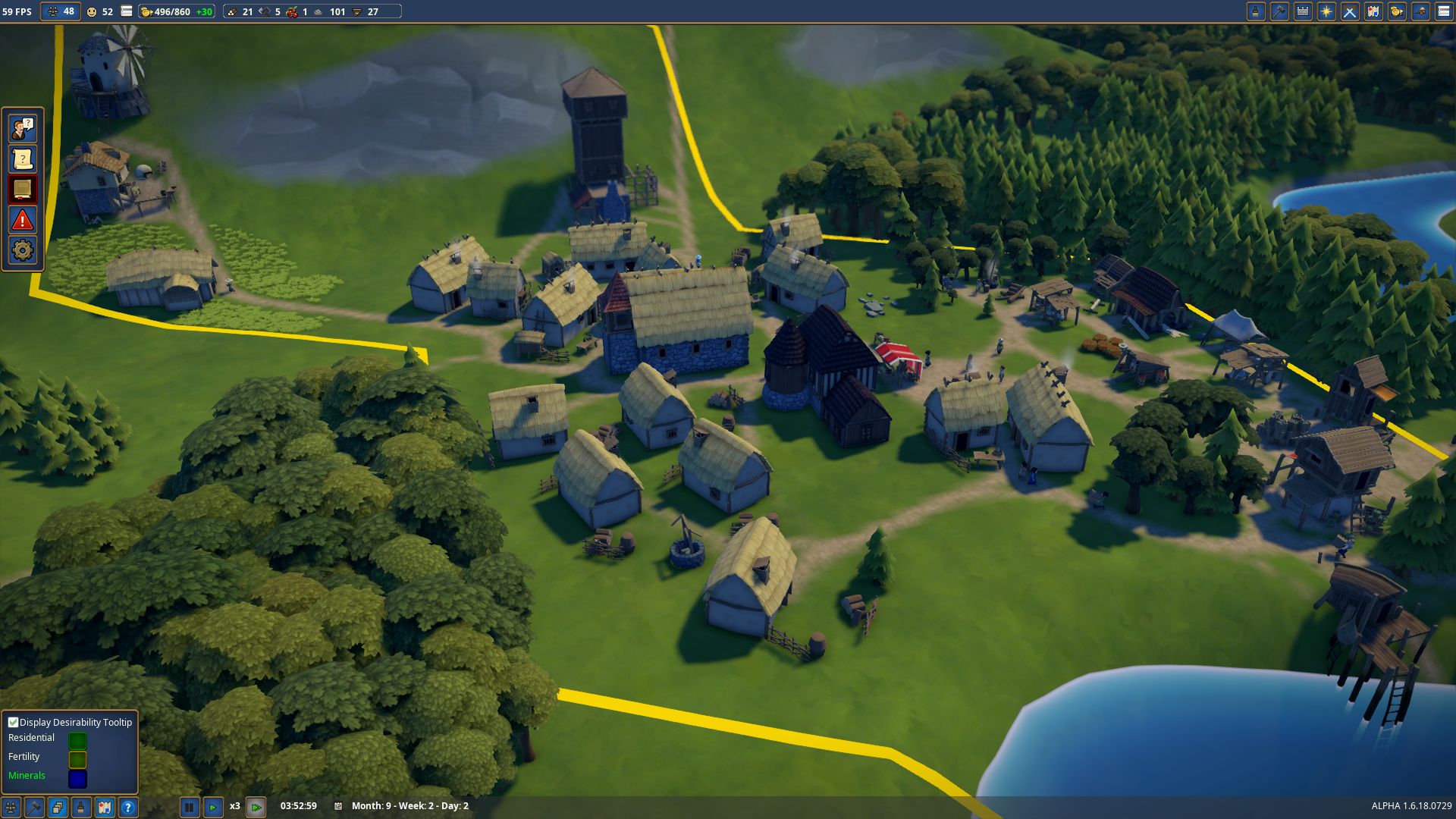 Alvania is a valley town instead of a seaside one, but it does have lovely riverside views. It has more potential to spread outwards, because there are way fewer hills, and the ground is very fertile for growing grain and stuff.

With each new round of updates, I grow more impressed with Polymorph Games' city-builder. Where previously Foundation was like slipping into a bubble bath, painting different areas for resource gathering, home building and forestry and then watching your little medieval peasants get on with things to build an impossibly picturesque town in short order, the continual updates have introduced some important speedbumps to the process. This slows down your progress, but also teaches you to play the game much more effectively. It is still a lovely bath, but one where you have to heat it up gradually as you sit in it, and gather the ingredients for bathbombs and bubbles yourself.

For example, the 1.5 update added citizenship tiers to your villagers. They can't build homes for themselves until you, as lord of the town, decide they can be upgraded to serfdom and give them a small stipend. This means that housing, a key component in your villagers' happiness, has to be balanced against how expensive it is to promote any new villagers at the end of the month. When starting a new town with this system in place, growth is much s l o w e r, but infinitely more satisfying.

This is also because V1.6 now has that aforementioned tutorial-based quest system that pushes you towards building the bits you need. You need the supply, storage and vending systems for food, so you are prompted to build a gatherer hut, granary and market early on. Ta-da! That's how you do a supply line!

There are some things that are still obscure (unless you get into the nitty gritty of the detailed help menus, which are almost too comprehensive to fully absorb when you first start). Villagers need access to water from a well, a nearby market for food and other wares, and some good old time religion from a church. But it's difficult to check the areas of supply these buildings cover once you've built them. I have, for example, started just plonking down wells every few hundred meters throughout the village because they're pretty cheap in terms of build materials, and who can be bothered? Johnny Wellseed over here.

I have though, as mentioned, been given a semi-exclusive sneak peak at the upcoming UI, and am authorised to pass this on to you. 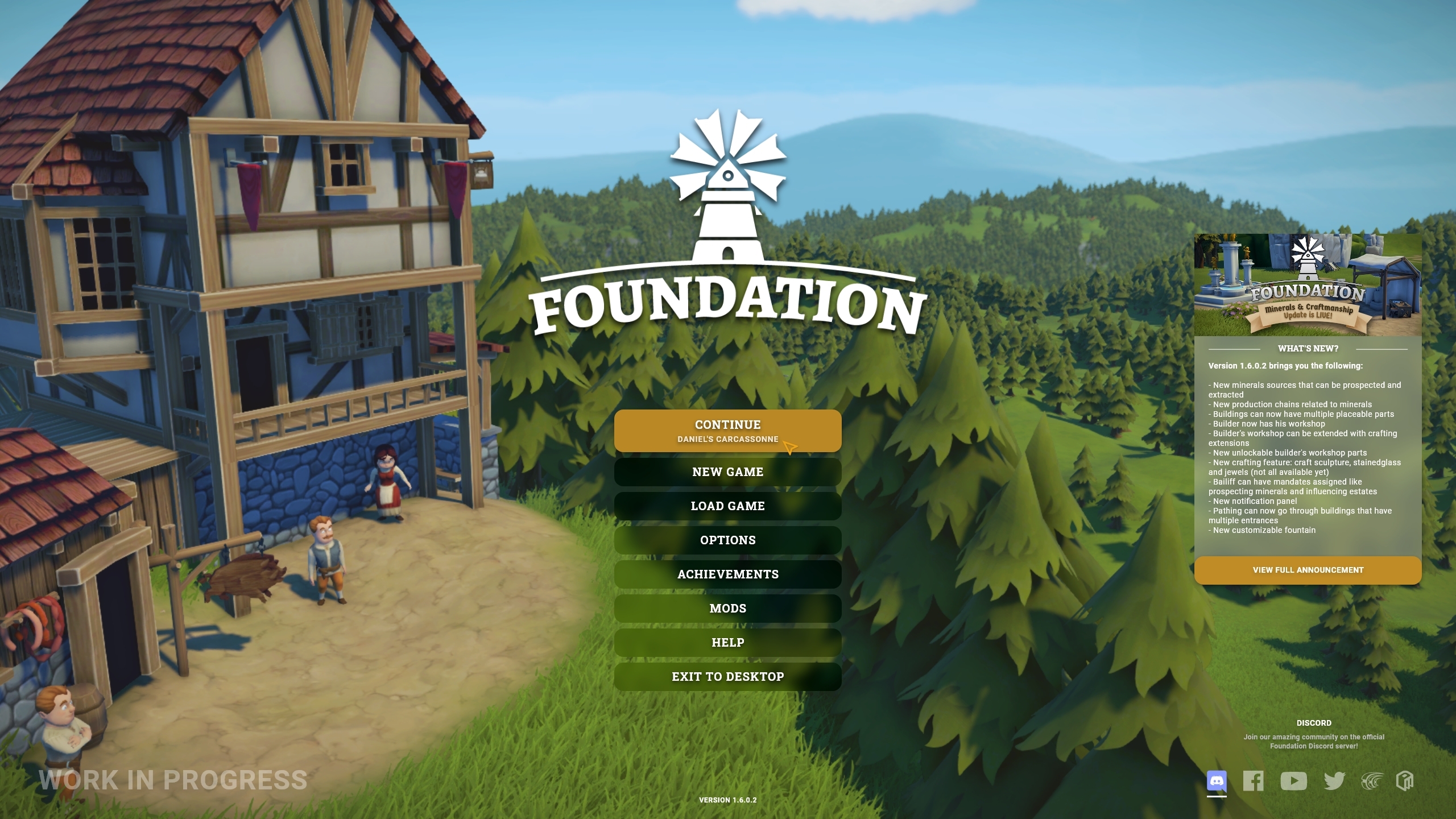 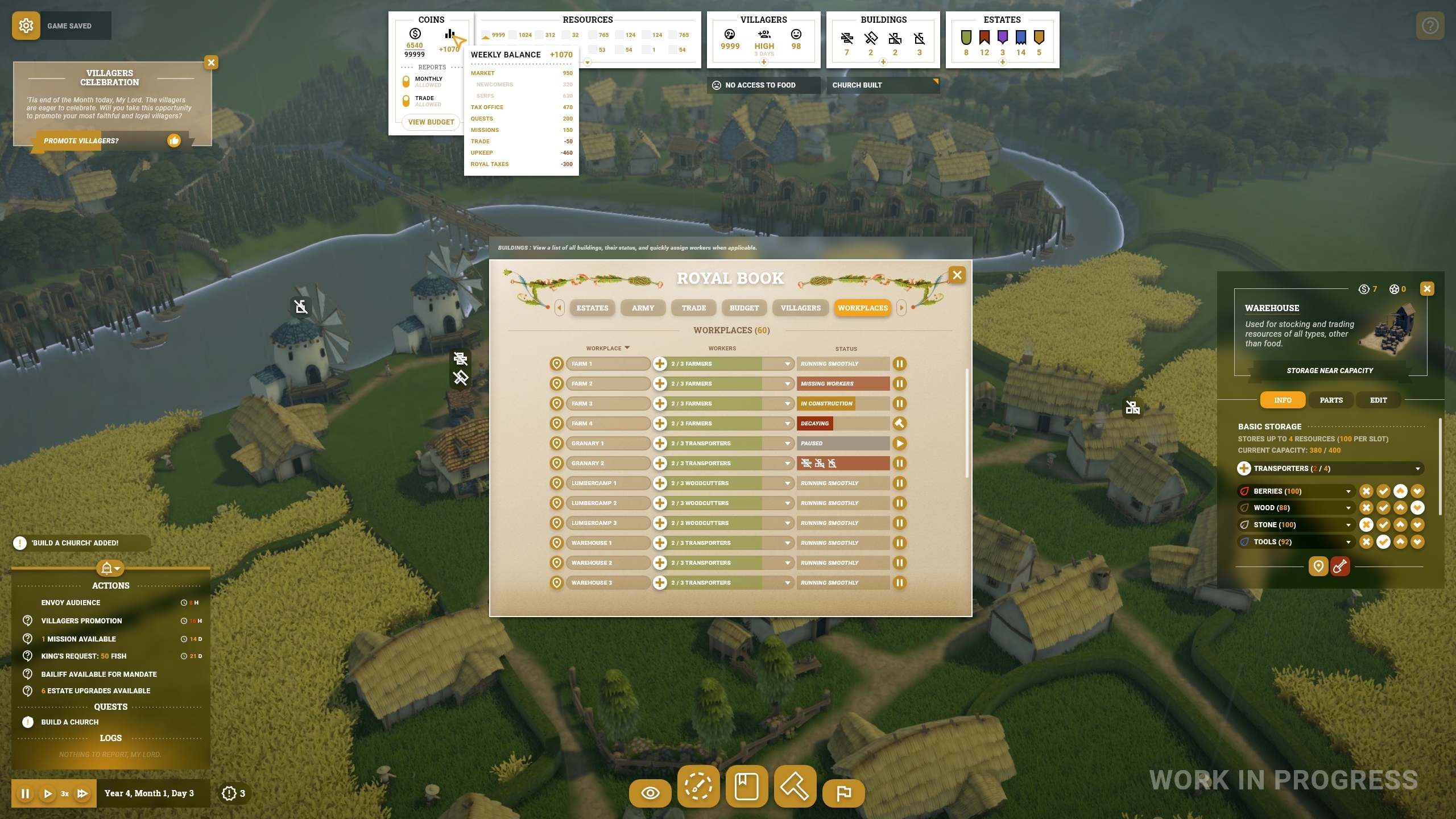 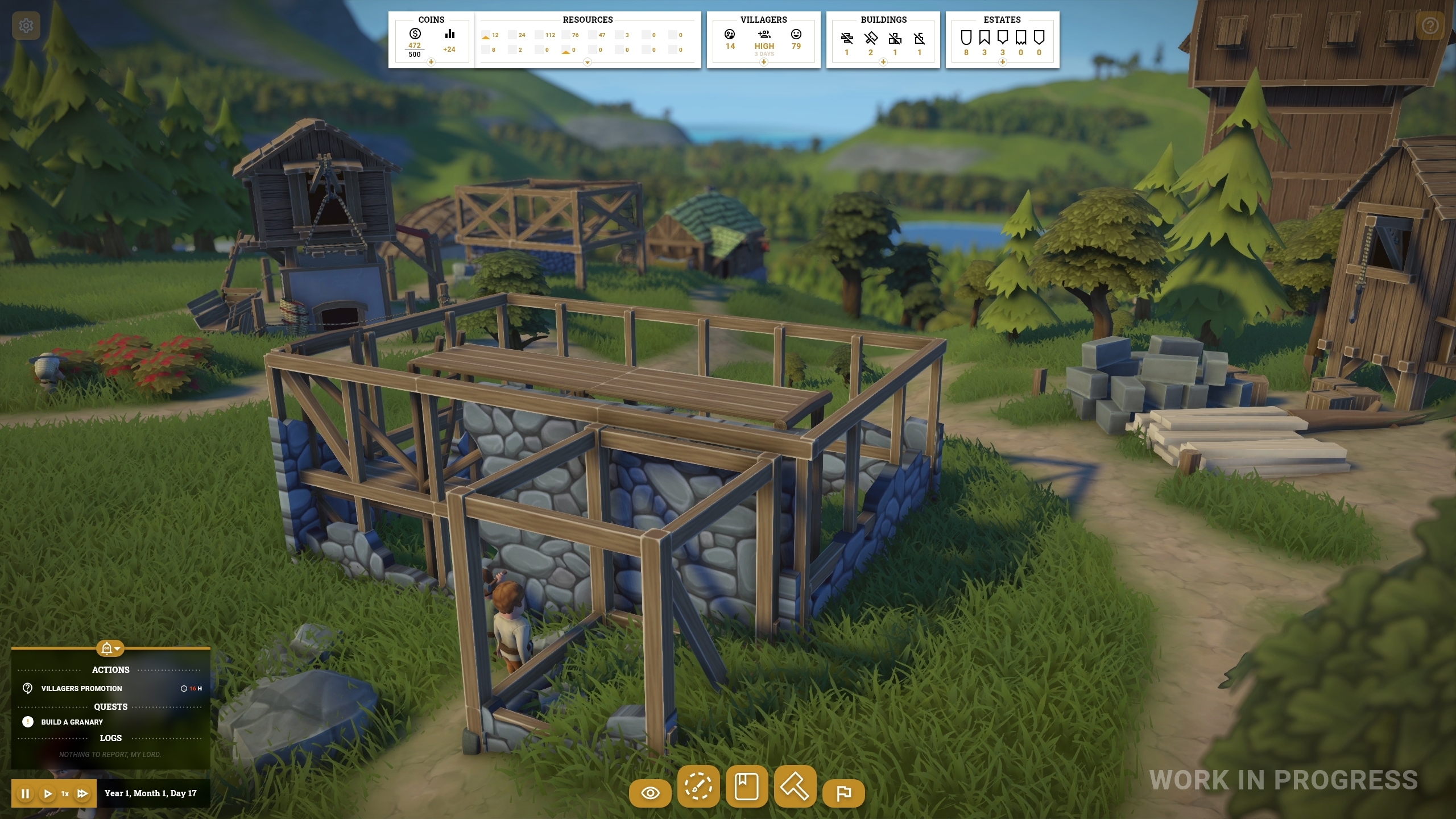 Look at it! Isn't it gorgeous? In particular, that Royal Book in the middle there is going to be an absolute game changer, allowing you to check on the status of pretty much everything in your town at a glance. So much clarity! Once this bad boy rolls out, I think Foundation is going to be a better city-builder in early access than most in the genre are at full release. It also gives me confidence that Polymorph know what they should be doing, and are getting on with doing it.

But! That UI isn't here yet. The 1.6 update is mostly exciting for all the Craftmanship extras it adds. You can go prospecting in them thar hills to find and mine minerals, and so this update adds gold smithing, glasswork and jewellers. Look at this cute little dude, happy in his work:

One of my favourite things about Foundation is the detail that has gone into all the animations and tiny workings of your different buildings. V1.6 has improved these, and made the grass and trees and everything prettier as well.

V1.6 also begins the process of being able to extend your industrial buildings, similar to how you can custom-build the parts of your important castles and churches. So now you can eventually unlock crafting workstations for your Builder's Workshop, so they can make statues and stained glass. Eventually you can build big masterwork monuments. They tread the line between impressive and extremely cute - here's an example from the game's Steam page. 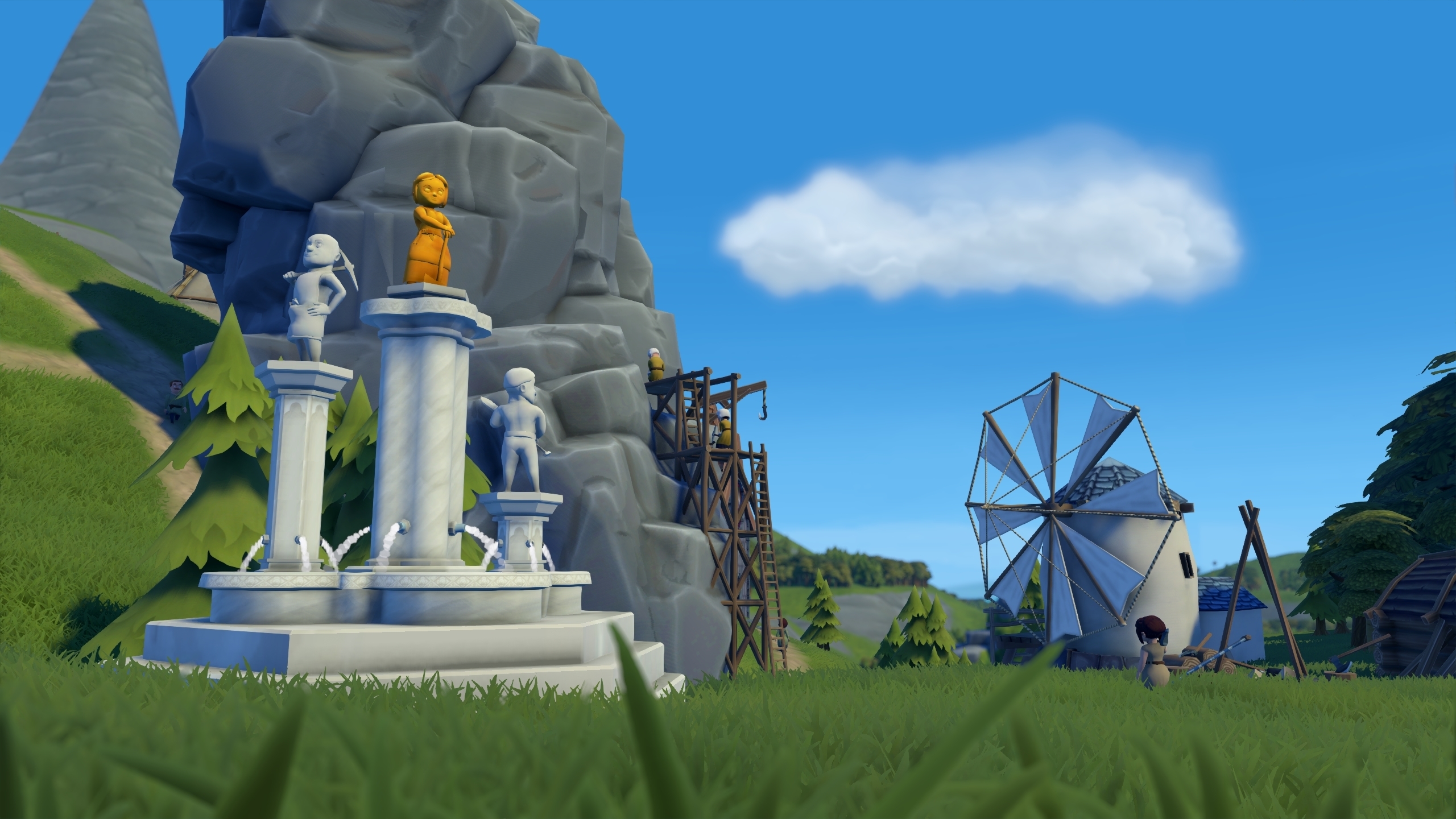 Alvania is still a long way off from such lofty structures. But the progress still being made in Foundation will ensure I'll keep coming back to get there.