Oh, Scott Cawthon, you sneaky, sneaky man. Yesterday, we reported that the Five Nights at Freddy’s designer was working on a spin-off -- a pizzeria tycoon game. The announcement was accompanied by a single screenshot of a FNaF 8-bit arcade game. It’s out now on Steam, and it’s free to boot. It’s also not what it seems. Read on to have the surprise ruined for you.

Freddy Fazbear’s Pizzeria Simulator starts as an arcade game where you make pizzas and launch them into the hungry mouths of gormless, grinning customers. It’s awful, at least until it breaks in a way that suggests that, oh dear, the machine is haunted. But there’s no time to worry about that -- there’s a pizzeria to run.

Cawthon wasn’t joking -- this is a restaurant management game. You buy furniture, animatronics, lighting and games for kids, and you can even get sponsorship deals to give you a bit more cash to spend on sprucing up the place. The more you spend, the happier your customers will be. You can upgrade the space, unlock new catalogues from which you can buy more advanced items, and occasionally you’ll have to settle or dispute lawsuits. 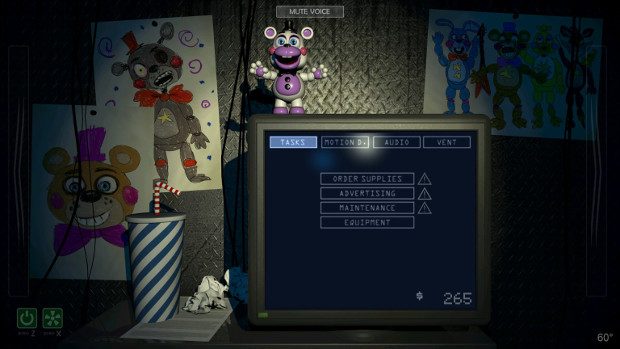 But Freddy Fazbear’s Pizzeria Simulator is also, undoubtedly, a FNaF game. See, when you’ve finished adding things to the restaurant, you’ve got to climb into your ugly manager’s room -- a dark and dingy place filled with terrifying doodles conjured up by evil children -- and work on your PC. There are menus to print, stock to order and maintenance schedules to sort out. Largely it just involves pressing buttons and waiting for tasks to automatically complete. Unfortunately, the noise of the PC and the loud ventilation system attracts unwanted attention from things that crawl through the vents. Animatronic nightmares.

This part of your shift, then, becomes a precarious balancing act. You’ve got to finish your tasks, but you’ve also got to manage noise by turning off the PC and ventilation system. You’ll also need to keep an eye on the vents, as shining your torch in there means that nothing is going to pop out and murder you. To help you out, there’s a motion detector and a sound system that allows you to turn on music in other rooms, drawing Freddy and his mates away from you.

Your first shift will be uneventful, at least, because you’ve not had a chance to screw up. The animatronic horrors can only get into the pizzeria if you let them. Somebody has been leaving old, broken machines in the alley behind the restaurant, not giving a hoot about recycling. You can bring them inside and salvage them for scrap, but it might be better to just toss them out because a lot of these old robots are full of malevolence. To test their spooky factor, you’ve got to make them listen to some audio cues, watch their reaction -- if they have one at all -- and then mark it down on a sheet of paper. If they start moving, you can tase them into submission. 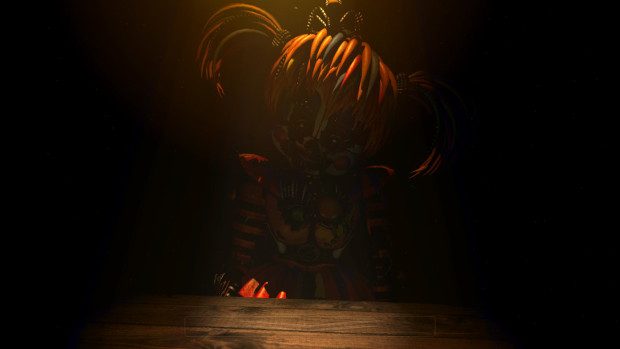 My first interrogation didn’t go quite as planned. The lighting and general disrepair of the animatronic creatures fills the interrogation room with a palpable sense of dread. And there are few things more distressing than being told to stare intently at something that might just jump at you and eat your face. The game’s nastiest trick, however, is that it forces you to look away when you’re marking the reaction, or lack of reaction, on the sheet. As awful as it is to stare at the monsters, it’s so much worse when you can’t see them. After the third, haunting audio cue, there was no reaction, so I looked down at the sheet and filled it in. I knew something was waiting for me on the other side of that flimsy piece of paper, but there was nothing I could do. I lowered it, and the mad robot launched itself at me, roaring. I survived, but it escaped. I was very sweaty when I started my second shift.

Freddy Fazbear’s Pizzeria Simulator is a decidedly clever piece of marketing, but it’s also spooky as hell. My palms are still a little damp, if I’m being honest. I’m obviously not built for the intense world of pizzeria management. That it’s free makes even more sense after playing. It’s not indicative of quality or length (though it is a brief game), but it does mean that Cawthon can get away with tricking players. A price tag would also need to come with an addendum that spoiled the surprise to avoid the cry of ‘false advertising’.

Freddy Fazbear’s Pizzeria Simulator is out on Steam now, and like food poisoning, it’s entirely free.