Want to challenge a demonic possession to see if you can help free a town from the horrors that lurk in the dark? Or maybe bond with your enemy as you make the long journey to his death? You could also embark on an adventure to save an already established friend from a previously vanquished villain, or take on the world alone with just your trusty sword against waves and waves of enemies. If fighting and questing isn’t what you want to do this week, maybe you’ll enjoy chilling out in a forest of slimes, watching them bounce around. There’s always a lot to do in the world of free video games.

Exploring a horrifying town where everyone seems to be slowly being consumed by a monster, this demo for FAITH: Chapter II has you investigating a case of demonic possession. Two priests have been sent to this strange happening in Connecticut, and you take on the role of one of them. You’re hoping to not just survive, but help the town out too, although it doesn’t seem like many people are still alive to help.

A strange creature, most of the time invisible, is grabbing humans and taking their remains. You’ve brought your trusty crucifix - which you can use to fight these demons and allow spirits to drift up to heaven - but you’ll also need to wander around and find various notes to completely understand what is going on. These, left by the people of the town, will fill in the gaps - especially as no one is around to tell you for themselves.

As you fight off the demons you’ll also hear strange sayings as they disappear, and there’s a lot more to this than you may have first thought. With multiple endings, a lot of story to discover, and some very creepy creates, FAITH: Chapter II is a really nice pixel horror game. The original game, FAITH, is also free if you want the full story behind your character and their situation.

Bound Together by John Vanderhoef

Have you ever found yourself forming an unlikely friendship? In Bound Together, you’re a bounty hunter who’s captured Dill - a thief who has been evading you for a long time. Now that you’ve got him, you can turn him in for a massive reward and live the rest of your life in riches. As you both, tied together, take on the adventurous journey to the prison where Dill will be hanged, you start to actually get to know him. He might not be the hard, crime-driven thief you once thought.

Through avoiding mushroom gods, crossing swamps full of goblins, and making your way up large, hot mountains, you start to really understand the person you’ve captured. Everyone has a story, and in Bound Together you get a chance to understand a story you didn’t think to listen to. You get to decide if you want to turn him in for your riches, or if you’d rather see the human in all of this. 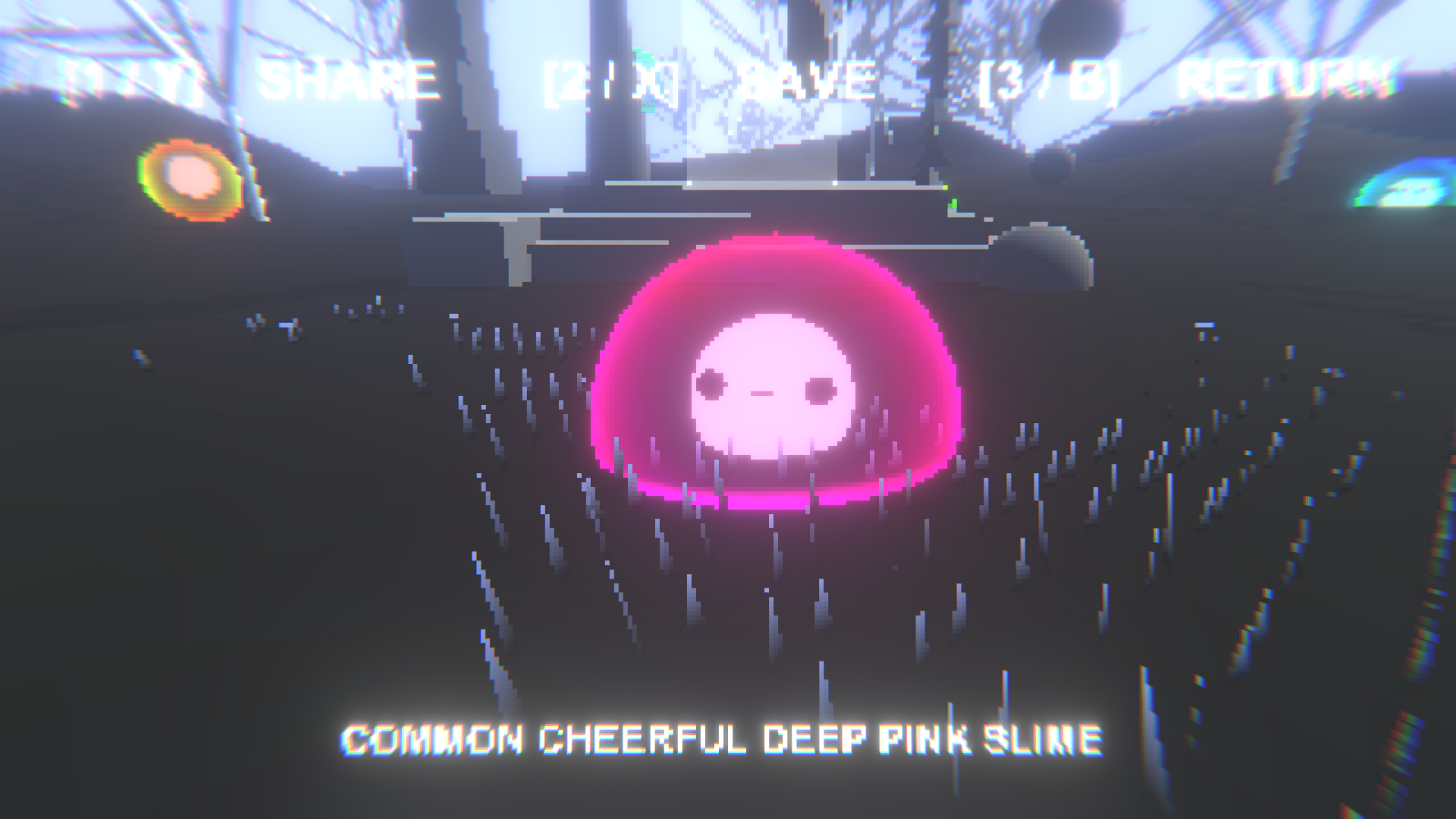 If you’d much rather just explore an area of land, with no real goal or need to follow some silly quests, then Slime Garden is for you.

In this procedurally generated world, you can wander around playing in a field with a bunch of beautiful slimes. Each of these magical worlds come with a variety of different trees and grass. If you get sick of the one you’re in, you can simply step on the platform in the middle of the island and let it take you to an entirely new place.

Each island is also populated with loads of jumping slimes. These slimes are joyful and colorful, bouncing around undeterred by your presence. You can take a screenshot of what you’re looking at, which will auto-generate a description - sometimes you can toggle between a few different options - and you can save it or upload it to your various fancy social media platforms.

It’s very relaxing, just exploring around and taking pictures. You can even go visit the water, and look at the neon color that surrounds the island you’re on.

Speaking of islands, Whirling Blade takes place on a single floating island that’s slowly being built around you. Using just left and right mouse clicks you’re able to dash around and swipe your sword at both enemies and the environment. You can gain berries and other resources from the bushes and trees around you, as well as from killing the monsters that are slowly appearing.

As you survive, more and more tiles will start to appear. These tiles aren’t always good - sometimes they have voids on them that spread if not slashed quickly. If they do spread then they create more tiles that slow you down. Different, and stronger, enemies also start appearing - ones that need to be hit several times before they die. All the while, you need to make sure you don’t fall off the edge of the map or take too many hits yourself.

There are few different weapons within the game which can be discovered and unlocked throughout, as long as you’re able to stay alive!

Going on a quest with your best, closest friends is always time well spent - unless that adventure is to find a missing friend, who seems to have been taking by a tyrant you once defeated, in which case it’s even better spent.

This is a sequel to Annventure, but you don’t have to have played the first game to understand this one. You play Anna, and one of your previous adventuring companions has gone missing. He was psychic and always thought that the tyrant you defeated would come back, and now it seems like he was right; the time has finally come, and it came for him first.

Now, you must embark on a quest into a dangerous, mutant-filled dungeon under his home to figure out where he’s gone. Annventure of a Lifetime takes you through a variety of different worlds, you can fight loads of enemies, and you can find cute things like hot chocolate to help you on your quest. Together, you and your friends will all grow even closer, and hopefully find the missing person to restore your friendship group.

Disclosure: Jupiter Hadley is an adept games wizard at Armor Games, helping them to find released free games to sign.