The awards ceremony at this year’s GDC was fun. At least, that’s what John told me from his seat in the crowd, where he saw the winners mount a stage some would consider too colourful for this planet. The Independent Games Festival Awards and subsequent Game Developer’s Choice Awards saw a range of trophy-grabbers, from indie students to adventure game veterans. Unfortunately for them, I was hiding backstage, skulking behind a black curtain and holding a voice recorder like a cudgel. I had one question to ask them all: If they had to give their award away, who would get it?

It’s like re-gifting, except you worked really hard for the gift and now you have to hand it over three minutes after your acceptance speech. Life is pain.

Here are the games and developers I robbed of victory, along with their personal choices for who really deserves to win. 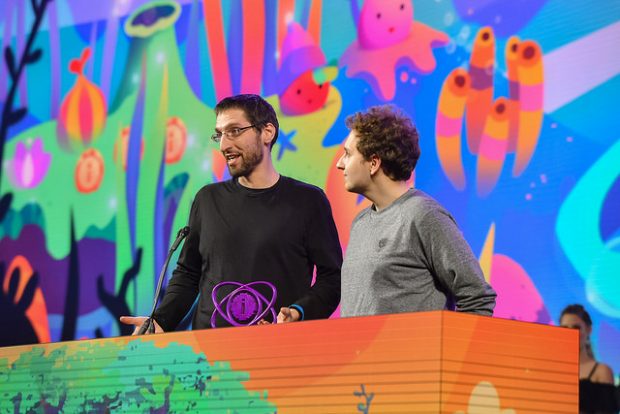 RPS: Hello! How do you pronounce this game?

Jakub Dvorský (Producer): Well, the official pronunciation is Choo-chel. But it’s a Czech word and as Czechs we pronounce it Hoo-hel.

Kunce: --Czech, original way but… you did great, yeah. 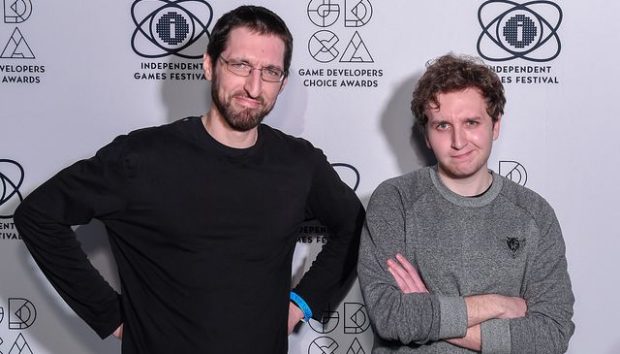 RPS: If you had to give this award to any of the other nominees, who do you think deserves it?

Kunce: I think we can be pretty honest w--

Kunce: Cuphead, yeah. We were joking [about] that when we were going through the nominations, that we were quite excited to see Chuchel but then we saw Cuphead and everybody was like, “Okay, no award for us.” So that’s why we’re so surprised to get this award. 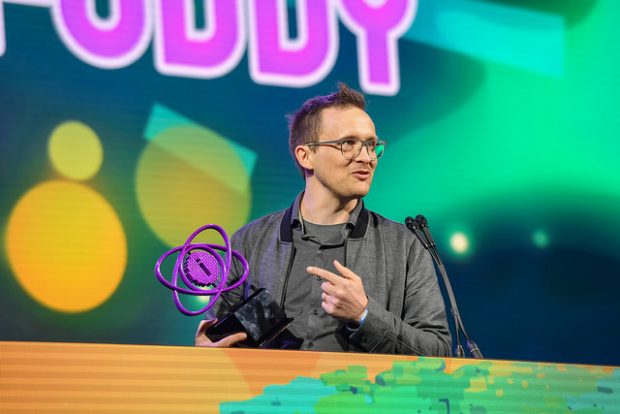 RPS: Why do you make your games so hard?

Foddy: They’re not hard! They’re just frustrating. There’s a difference. A hard game is one that you will never finish, this is a game that will make you feel frustrated but eventually you’ll get there. I believe in you.

RPS: If you had to give your award to another nominee, who do you think deserves it?

Foddy: In Nuovo, I think all of those games are deserving, of course. 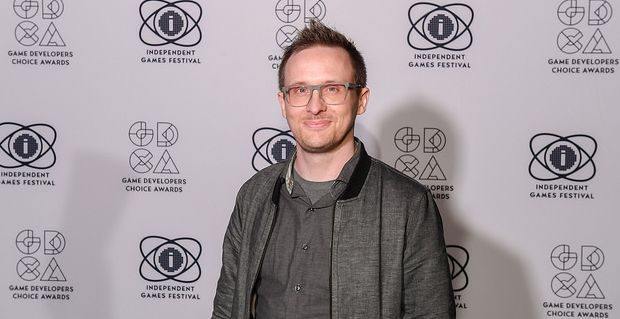 Foddy: I’m very fond of 10 Mississippi which Karina Popp made in one of my classes, there’s a very soft spot in my heart for that game.

Foddy: It is biased, but you asked. 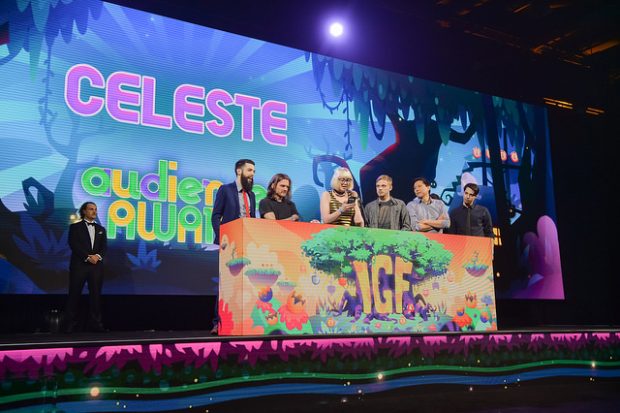 RPS: I just saw Bennett Foddy. Do you think his game should have an assist mode?

Matt Thorson (Designer): No. It would ruin that game because the whole point of that game is frustration. He was telling me that Celeste should just be like this: where if you die you go back to the start. Or have the possibility of that happening, and I was like: “I dunno, man.”

RPS: If you had to give this award to somebody else, who’re you going to give it to?

Thorson: Probably Into The Breach, I’ve been playing that a lot and loving it. I’m just really enjoying it, it’s just a really good game. 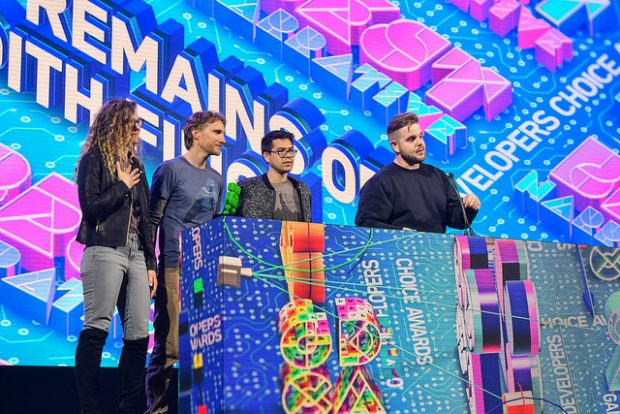 RPS: Which Finch had the best death?

Kwan: Yeah! Oh my god. That was the first one that really struck me.

RPS: I like that you classify these characters by death.

Kwan: Their names changed a lot.

Bell: I’m gonna say, best death is… Lewis’ is really sad. It can be read as a suicide. He experienced the loss of his brother and then he got cloistered by his mom and had to have his imagination go somewhere and it was cool to help create that, and that meant a lot to people.

RPS: Obviously, you won your award, but if you had to give it to another nominee who’d get it?

Bell: I blacked out, I don’t know what the other nominees are.

Kwan: Yeah, I cannot keep track of it right now.

Bell: Kids. That was an IGF nom.

Kwan: Baba Is You was probably the most interesting game I’ve seen in a long time, so I’m gonna give an award to that even though it’s not a “narrative”. 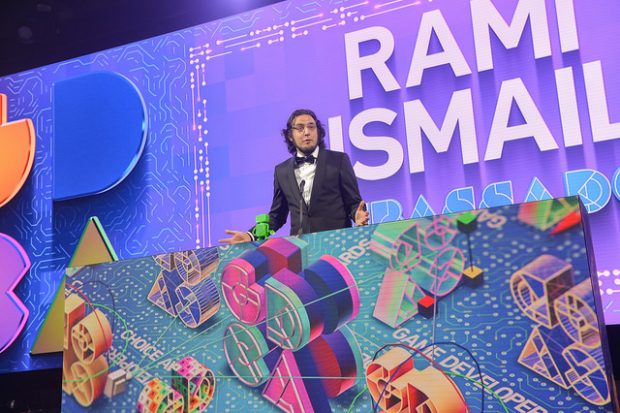 RPS: I’ve been asking everyone tonight who they’d give their awards to. But it seems kind of churlish to ask you to do that.

Ismail: Oo! I think the weird thing is that I don’t think I would give it to anybody, I think I’d give it to everybody that’s not here. Is that an option? Everybody that wanted to be here but is not in this room.

RPS: Well, what do you think deserves to win Game of the Year at the end of the night? You can’t say “everybody” for this one!

Ismail: For me it was Nier: Automata, absolutely. It is so rare that a game immediately feels like it should be in the top five most memorable games of my life. And Nier: Automata through themes, through gameplay, through using my experience with games against me, using it as a storytelling method, I’ve never seen anything like it and I’m so glad I played that game. 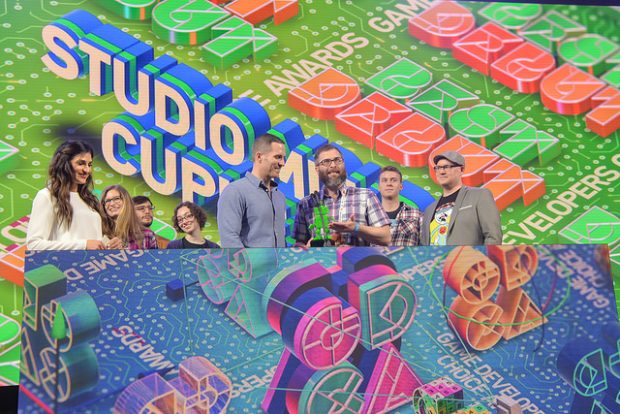 RPS: How many references are in this game?

Chad Moldenhauer: Oh, so many that we probably forgot at least 20% of them.

Jared Moldenhauer: We definitely forgot some of them, but I’d say a good 500. They’re very loose though, we didn’t want anything that took the player out of it, made them think: “Now I’m not in the universe, this is a definite shout out to said game”. But there are so many minute details either in the patterning or visuals that are specifically about something that we loved when we were a kid.

RPS: Who would you give your award to if you had to give it to someone else?

Jared: Hollow Knight? I put a lot of time into that… I was hoping to see them at GDC, I need to put in a little bit of work and make sure we cross paths but Hollow Knight was one of the first things I got to play after [development]… and I was very happy with it.

Chad: I think Hellblade, the visual style is amazing. Or maybe Night in the Woods.

RPS: You can’t have two. I’m taking your first answer. 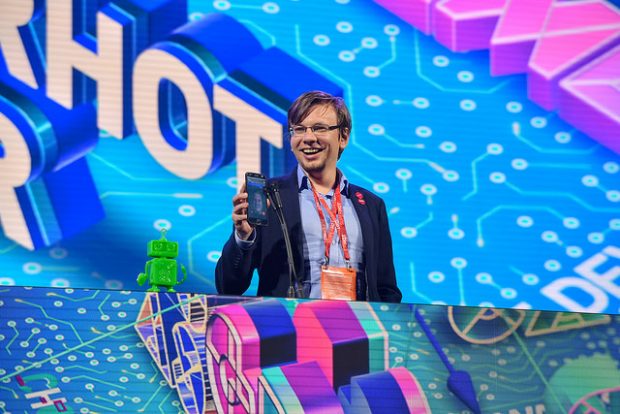 RPS: What is the definitive 'coolest way' to kill a faceless dummy man?

Tom Kaczmarczyk (Producer): Right now, at least in the current iteration of Superhot VR, is to grab his gun right out of his hand and shoot him in the face with it.

RPS: Is any of this, that we’re experiencing right now, real?

Kaczmarczyk: I don’t think so, not to my knowledge.

RPS: Who would you give this award to, if you had to give it to someone else?

Kaczmarczyk: Definitely not the triple-A guys, they have enough awards already. They’ve got buckets of awards.

RPS: So who’s getting it?

Kaczmarczyk: All the amazing indie VR developers that have actually pushed the medium forward… a whole swathe of –

RPS: YOU CAN ONLY GIVE IT TO ONE. 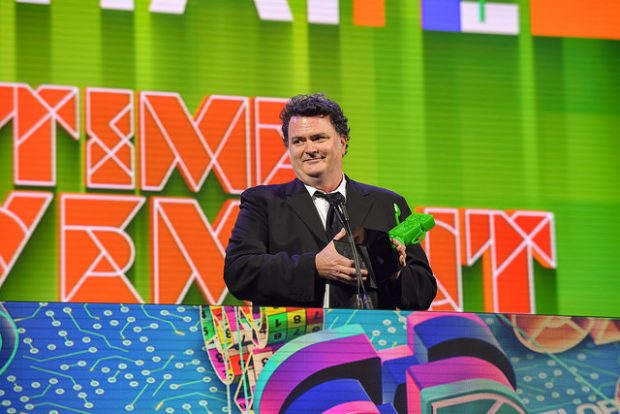 RPS: How many games have you made so far, can you even remember?

Tim Schafer: No… no.

RPS: Give me a roundabout figure.

Schafer: I don’t know. Ten. Less than ten. Fewer than ten! Did I just make a less-fewer error?

RPS: Which is closest to your heart? Which do you think is most responsible for getting you here?

Schafer: They’re all so different, and each one was really personal. Psychonauts obviously, since we’re making another one… I just love those characters and I love that world. But Grim Fandango I think is the one a lot of people react to. But personally, it’s all over the map. Because Brutal Legend speaks to a specific personal time in my life when I was growing up and loving heavy metal, so a lot of personal dreams and fantasies are alive in that game.

RPS: I need ONE definitive game.

Schafer [whispering]: No, because Kinect Party is our best game and no one bought it – what am I gonna say?

RPS: I’ve been asking everyone who they’d give their award to, under different circumstances. It almost feels cruel to ask you to do that.

RPS: Yeah, but I mean, now that it’s broken… 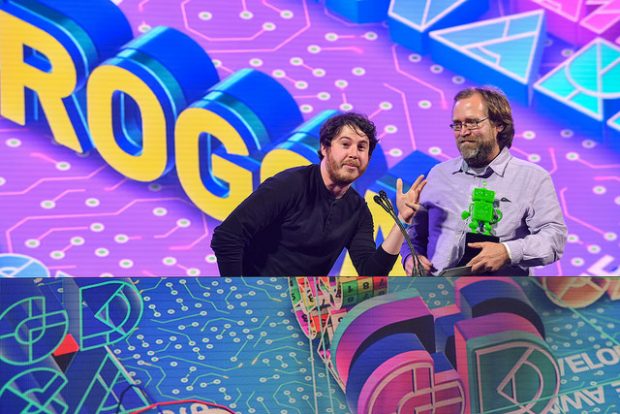 RPS: How do you say the name of your game?

RPS: No, I think it’s Guraw-gawah.

Roberts: You know what? I accept your interpretation as valid…. That’s not how I say it, but that’s fine. It’s my fault for making it ambiguous.

RPS: If you had to give your award to another game, what would you give it to?

RPS: [opens mouth to shout about choosing a single game]

Roberts: – Everything, the David O’Reilly game, which I was up against. It’s just completely out-of-the-box insane. A very inspiring game.

So there you have it. In the end, most of the folks I got the chance to interview gave up their awards quite peaceably. Who knew game developers loved other people's games so much? To round things off, here’s the final list of the true greats. In other words: those who deserved to win, according to those who did win.

You can watch the whole double-bill awards ceremony for yourself, or just read the full list of winners here and here