Primogems are one of the most valuable currencies in Genshin Impact. With them, you can purchase all kinds of things, from wishes to refilling your Original Resin, allowing more rewards to be collected. Here's how to obtain more Primogems in Genshin Impact.

Primogems are one of the main premium currencies in Genshin Impact. While they can be used for gacha pulls to unlock more wishes and increasing your Original Resin to earn more rewards from special quests, getting more doesn't necessarily have to cost you real money. Of course, there is the option to purchase primogems with real-life money by going to the 'shop' option in Paimon's menu and either buying bundles like the Blessing of the Welkin Moon or a Crystal Top-Up. The Genesis Crystals can then be exchanged for primogems by pressing the '+' button next to the primogems logo in the top-right hand corner of the screen at a 1:1 rate.

Your adventure rank increases from all manner of actions you perform in the world of Genshin Impact. From the adventurer handbook and worshipping statues to opening chests and beating quests, you should have a constantly-increasing rank thanks to the experience you'll be regularly gaining. What you might not remember though, especially if you've been exploring the world a lot, is the extra rewards and gear you can gain from the Adventurers' Guild in Mondstadt (and other settlements). Head there each time you rank up and you'll gain rewards, including Mora, food items, and primogems. For example, at adventure rank four and twelve, you'll earn 50 primogems, so don't forget to claim these rewards. Of course, you don't get them every single adventure rank, but the other gear you'll receive makes it worth it (you can even get Acquaint and Intertwined Fates for free wish pulls).

You can find primogems in all chests from Exquisite to Luxurious, as well as Common if you had to complete a mission like defeating a camp of enemies to unlock it. They show up in fairly small numbers in the low-rarity chests, but it really does add up. Clear out camps of enemies and you'll frequently be rewarded with a chest which contains not only primogems, but adventure EXP, sigils, mora and a random amount of other delightful gear.

Statues of the Seven can be seen clearly on the map, and activating one reveals more of the game's map than you previously were able to see, as well as healing your party. However, if you have the required item corresponding to the statue's god (Anemoculus or Geoculus for Anemo and Geo statues), you can worship the statues and gain rewards. These include stat boosts, adventure EXP, and sigils, but also primogems, so if you happen to have picked up some god-worshipping kit, go give them a little tickle and they'll reward you with some gems.

Go to the Adventurer Handbook for a whole load of ways to earn primogems. Firstly, the 'Experience' chapters offer primogems every time you complete a set of pretty simple quests, often involving opening chests and worshipping statues (which I've already mentioned as ways to grind primogems). Basically, keep your eye on these missions and you'll earn extra goodies on top of your gems, like Mora, items, and adventure EXP.

In addition to the chapters, once you reach adventure rank 10 you'll be able to take on commissions. These can be pretty lucrative, and take the form of daily quests you need to carry out in order to gain bonus experience, enchantment ores, and yes, primogems. The word 'primogems' is losing any meaning it ever had at this point, but there's more.

Click on each commission to navigate to it and complete the task set for you. After you complete four in a day, you can pop over to the Adventurers' Guild and grab your bonus rewards which includes, you guessed it, primogems.

Go to the 'Achievements' option on the pause menu to see which achievement rewards you can claim. Most of these offer primogems as a reward, at a minimum of five but increasing up to more for the tougher challenges. A lot of these will be easy enough to do and you'll complete them by accident, but it helps to have a bit more of an idea of what to do. For example, unlocking all teleport waypoints in Mondstadt is something you'll probably want to do regardless, but for more unique challenges like striking an eagle mid-flight with your bow you'll probably have to go out of your way.

You get five primogems per achievement which means you get a wish per 32 achievements. Sounds like not much, but they can be completed pretty quickly if you know what you're doing.

To check which events are available, select the 'Events' icon in the pause menu and have a look. Some events require a certain adventure rank to participate, but once you do you'll be able to see the challenge and the rewards available. For example, at time of writing, 20 primogems were available just for completing a trial of the character Venti, obviously intended to get you to want to purchase more wishes for the chance to unlock him as a playable character.

As well as events, check your mail (the letter icon to the left of the pause menu). I got all kinds of freebies. Completing a survey for the developers got me 50 primogems, but I got 1600 just as a launch appreciation gift, so if you start playing now you'll have the best possible opportunity to get as many free primogems as possible. 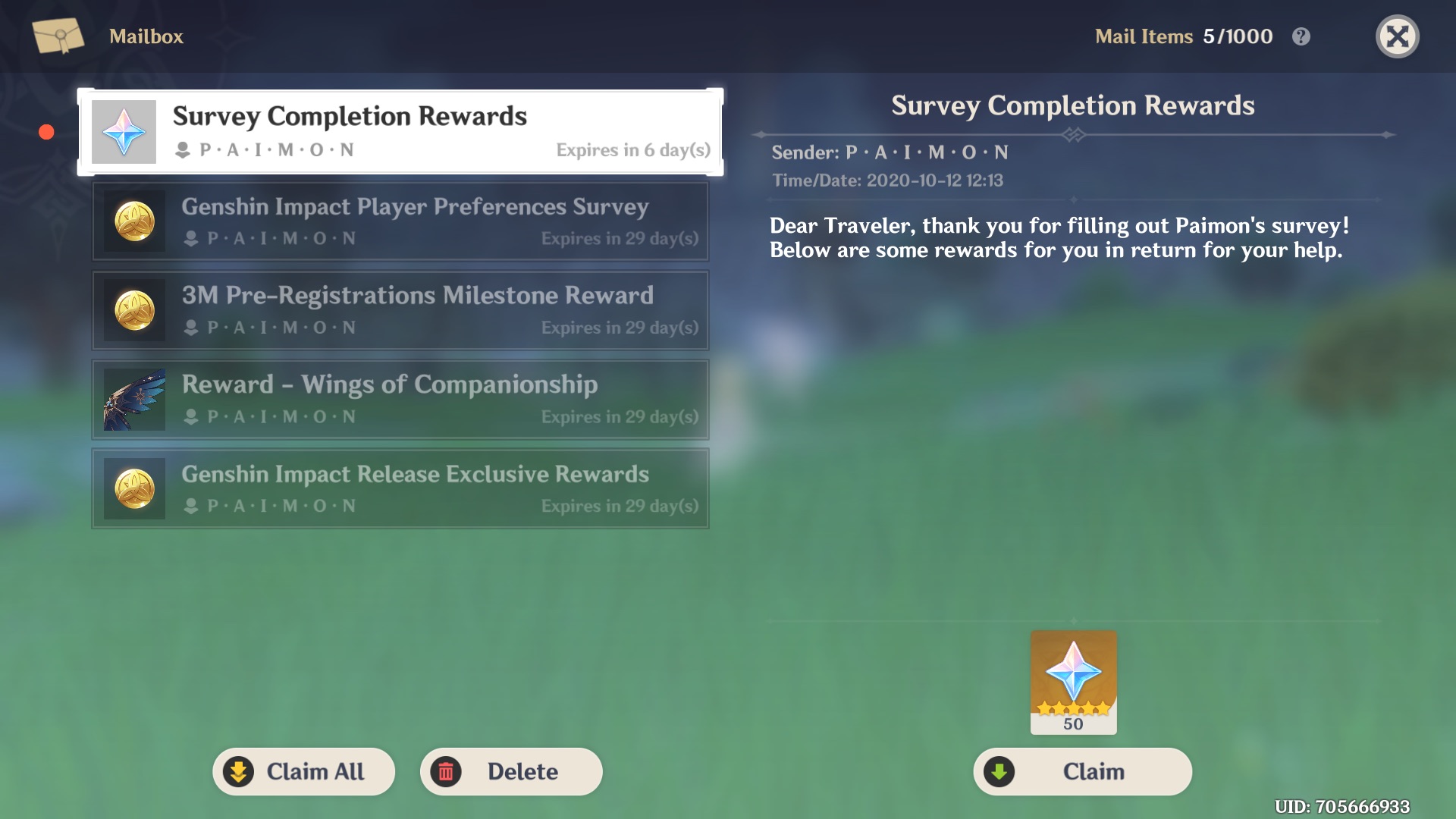 That's all you need to know about primogems! Now if only there was a currency that'd shut Paimon up for one second.