Ebay vouchers are never simple, are they? One is doing the rounds at the moment promising 8% off all sorts of PC components and monitors, but it’s not clear which ones and why. Presumably Ebay believe that shoppers enjoy the thrill of the chase as much as parting with their hard earned cash, which feels... a stretch. Luckily, I've done the hard work for you and picked out some of my top highlights below, including £50 off an AMD Ryzen 9 3950X, and our best gaming CPU champion, the Ryzen 5 3600, for £152 - which is £17 cheaper than that Newegg deal on Monday.

Fortunately, the current code – PRICE8 – does seem to work with most things on Currys/PC World's Ebay store, which means there are some pretty good deals floating around if you’re prepared to do a little digging. If it works, you’ll get a little preview on your screen, like this: 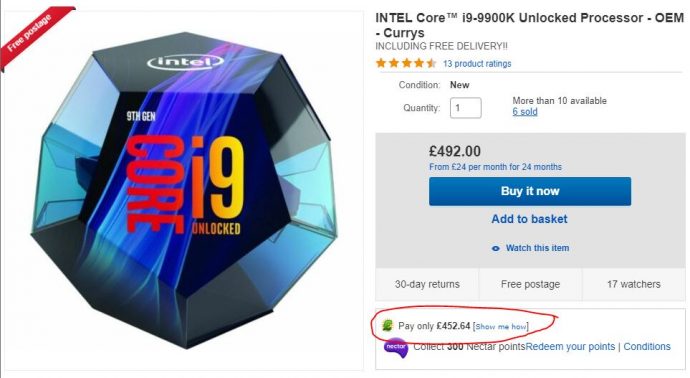 Note that the voucher will only work for a maximum of £50 off, so if you want to feel as smug as possible, you’re looking for something that costs exactly £625.

Alas, graphics cards seem to be almost entirely excluded from the promotion, and the prices don’t seem all that great to begin with. So, if you’re after a new GPU, you’re probably better off heading to our graphics card deals page instead.

Given the current shortage of gaming monitor deals, a couple of options caught my eye as I was browsing, though. The 240Hz G-Sync Compatible Alienware AW2518HF gaming monitor can be yours for £303, for example (which isn't as good as its £269 price drop a couple of months ago, all told, but it's still the best price I've seen for this monitor for a good few weeks now), or you could get the Asus VA326HR for £183.

Others don’t seem to work with the voucher, but are worth flagging up anyway, because we can vouch for them as solid picks and decent prices. There's the excellent MSI Optix MAG272CQR for £339, which is £60 cheaper than its usual price of £400, as well as the Asus ROG Swift PG278QR for £479 and Katharine's current best gaming monitor for pick for those after a small G-Sync screen, the Acer Predator XB241H for £299 (if you can stand its gaudy red feet) to name but three.

There are plenty more bits and pieces in Curry's Ebay sale if you want to have a further nose around, and if you spot anything particularly well priced in there, be sure to share it in the comments.