Outer Wilds is an incredible game. Uncovering snippet after snippet of information that all feed together into a phenomenal story. Puzzling through an area that cleverly teaches you how to [redacted]. The feeling of stumbling into an area and realising it’s a [redacted] full of haunting messages left behind by [redacted]. Taking the time to sit back, roast marshmallows, and meditate with [redacted].

It’s also somewhat difficult to talk about without spoilers, and extremely worth going into unspoiled. So please, go and play it, and then come back and let me tell you about how I mostly spend the game delighting in being hurled into space.

I ended probably 60% of my time loops by accidentally floating away from any given planet, because I’m impatient and I like using my jet pack to propel myself around as fast as possible. The problem with this is that if you give yourself just a little bit too much up instead of forwards, you’ll accidentally break out of gravity’s pull, especially on the smaller planets. (Outer Wilds is very much a game that teaches “more haste, less speed,” and yet I am not a quick learner.)

The first time it happened was actually my very first death. Or rather, trying to land back on the planet from orbit without my ship and realising it was technically possible was an exhilarating moment cut short by the fact that slamming into the ground at top speed turns out to be lethal. This became a regular occurrence.

I already put a spoiler warning at the top, but I feel the need to reiterate that I’m about to tell you things about how the planets work. Figuring this out is one of the best bits, and you won’t get the moments of giddy delight at being flung out of the atmosphere, among other things, if you already know they’re possible. 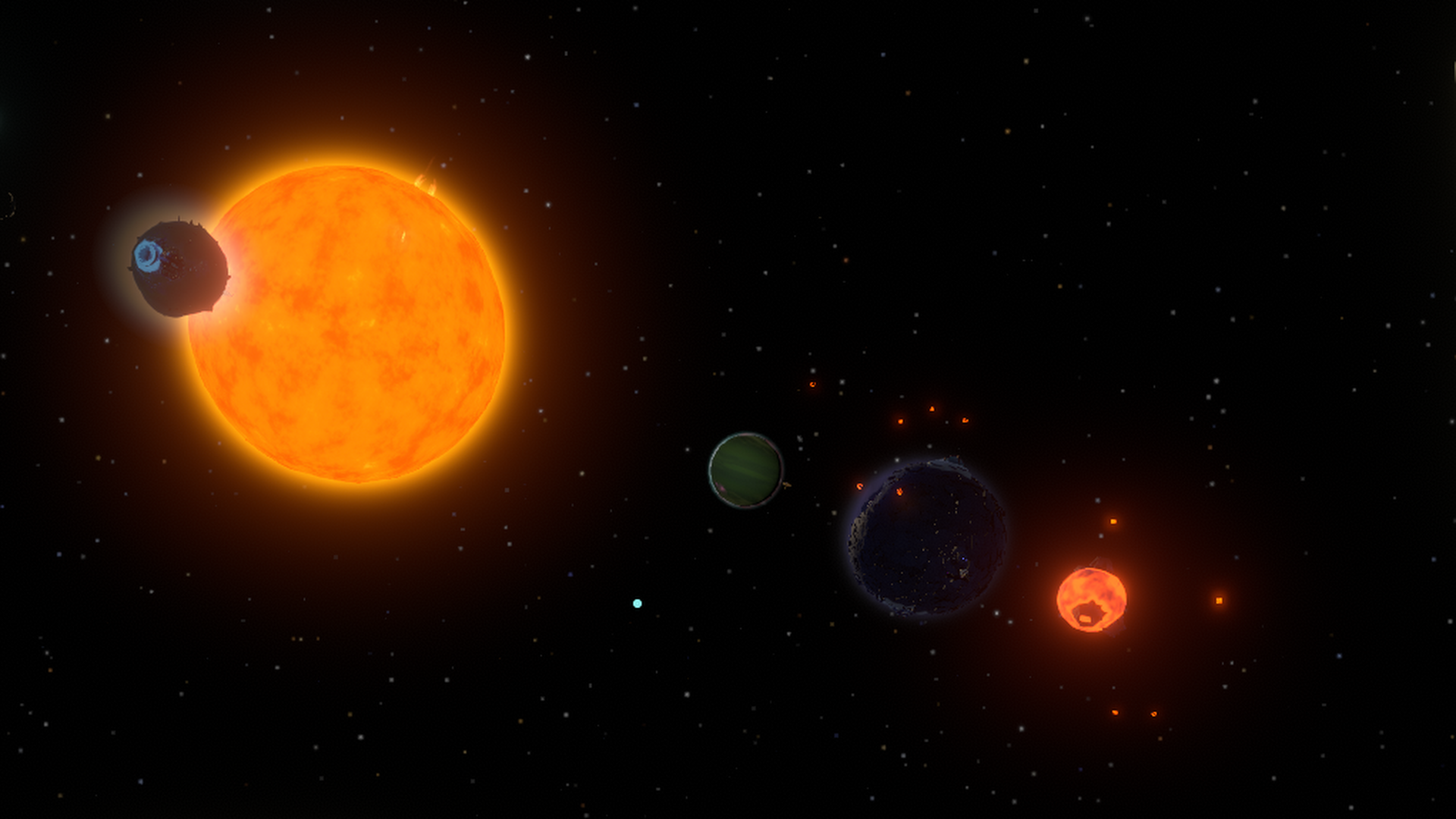 You haven’t experienced Outer Wilds until you get picked up by the sand column stretching between Ember and Ash Twin and get carried between the two planets but land safely, only to realise that your ship is left behind and there’s no way to get back. Or when you finally, finally make it to the Quantum Moon for the first time, try to hop over a cliff, and see the whole thing vanish from underneath you.

My favourite example, though, was less spectacular. It happened on Giant’s Deep. The storm-torn planet has almost double gravity compared to the home planet of Timber Hearth, which is very inconvenient for my jetpack-skating ways. So imagine my surprise when I’m hanging out on an island getting a very important lore dump about what the precursor Nomai were up to here, and suddenly there’s no gravity at all.

I was so engrossed in reading that I hadn’t noticed one of the cyclones picking up the entire island and throwing it into the vacuum of space. In fact, it took me a minute to even figure out what had happened, thinking that picking something up, which I had done just as I floated away from the floor, had somehow turned the gravity off. Then I turned around and there was nothing but stars.

Luckily, the island came down, and me with it, but I keep thinking about the moment. None of the planets in Outer Wilds is safe, but aside from falling into an errant black hole I hadn’t seen a place that could just shrug you off like a giant flicking a fly away. But it makes sense. The game’s solar system spins entirely uncaring about the player or any of the other people, past or present.

The Nomai knew this. They installed little gravity wells that keep you in place if the island gets tossed around. They’ve even got little cyclone images glowing on the ground. But I didn’t notice them because I’m an excitable explorer and it’s my first (ish) time in space and there’s so much to learn.

Thankfully, the absolute reset allows both the uncaring, dangerous universe and the excitement of figuring out exactly what will or will not kill you to coexist without being frustrating. If you blink and lose a moon beneath your feet, no worries. You can just try again next round.