Ghost Of A Tale is out of early access, letting you squeak your way past an army of rats, in a rodent stealth-cum-RPG. Is it the big cheese, or lost in the rat race? And considering these incredibly obvious puns, why on Earth isn't it called "Ghost Of A Tail"?

I love the premise. You're a mouse called Tilo, ridiculously cute, who starts off in a rat prison. Slipped a key by a mysterious stranger, you begin your escape from the jail, only to emerge into a daylight plagued with more rat guards. Your wife is missing, and you're determined to find her, and doing so is going to involve helping out a lot of other creatures. Tilo, a minstrel, can (in theory) gather multiple outfits of other classes, and thus adopt their abilities, sneak into new areas, and delve deeper into an RPG of fetch quests and combat-free stealth. 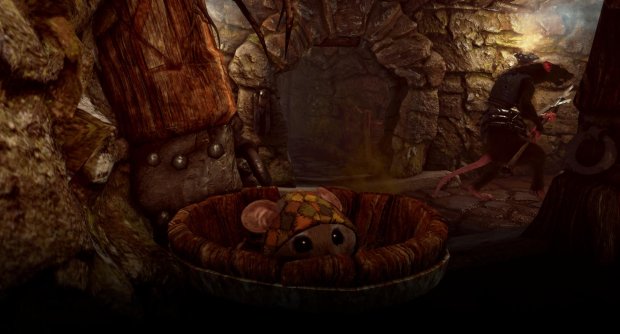 The first thing to say is, this isn't quite ready to be out of early access. It crashes to desktop too often, and feels glitchy in the wrong moments. Once a rat has spotted you, since you're a weeny mouse who can't fight back, your only recourse is to run and hide. So the fact that half the time you'll get caught on the scenery mid-chase really doesn't endear. There are other annoying glitches too, like the way the camera sometimes madly spins to face the wrong direction when you hide, or come out of hiding, crucially messing up your sneakiest sneaks. All that said, I'm enjoying a lot about Ghost Of A Tale! That it rises above its frustrations says a lot about how lovely and engaging the whole premise is. And yet, despite having a nice time with it all, I still come to you clutching so many more complaints in my arms. It's one of those sorts of reviews.

So I love the stealth, and that's pretty crucial. You sneak with the right mouse button, with sound and vision indicators floating above the location of known guards in an intuitive way, with a click of both left and right buttons having you leap into designated hiding spots (cupboards, barrels, under tables). If you're spotted, you have to peg it and find somewhere to hide, with hiding spots not usable if guards have line of sight. It means you need to budget your very limited sprint to try to dart off down corridors, leap over walls, and frantically scramble, without accidentally stumbling into the path of other rats. The result is a really superb panic, my heart even racing at times as I try to make good my escape. That's when a glitchy clip doesn't spoil it of course. Which it too often does.

You can then use guard reactions to your advantage, making noises to distract them, or lure them, then hiding until they're past, nipping out and racing around a corner to lose them. Or throw a bottle at their heads to temporarily knock them out, rob them, and grab everything not nailed down in a room. It's wholly lifted from your Thiefs and the like, and good for it. In fact, it's bordering on a war crime that at no point does any of the rats mutter, on your disappearing, "Huh, must have been humans." A big, bold third-person stealth-me-do is far too rare of a thing, and while this is aiming for far smaller ambitions than, say, a Dishonored, the mechanism is still very pleasing.

Despite the glitches, the biggest problem I'd say Tale has, is that it fails to establish its premises in a tangible way in the opening hours. It's one of those games that shows you a skill tree in the menus, and then for an enormous stretch of time doesn't even hint at how it will be used. It tells you to collect all these outfits, but forgets to have the first be easily gathered to explain the concept. It tells you to go off and find Object X, which in turn requires you to find Object Y, which naturally needs you to acquire Object Z, but Z is in a locked box and you're only told to "get the key". In a vast fortress of multiple zones, twisting tunnels, enormously intricate networks of rooms and corridors, and all of them guarded by legions of deadly rats. "Find the key" is about as meaningless an instruction as you could be given.

So you meander a lot more than you purposefully explore. And everything inside, and everything at night time, is all so ridiculously dark, that you meander blindly. You can hold a lantern or candle, but both are set far too dimly, and burn through too quickly, slow you down, and make you too easily spotted. Where Thief always very masterfully pretended it was showing darkness, but actually let you see just fine, Tale is just actually dark. And that's definitely less fun.

But then it'll charm your pants and underwear clean off with its lovely writing right when you were feeling too cross with it. Other characters are properly funny, have good gags to drop on you, and the way you react to their banter feels like it makes a difference. Heck, the clothes you're wearing makes a difference. And this is all given a decent pathos through Tilo's genuine sense of fear, perhaps even grief, for his missing family. It's full of chuckles, extraordinarily sweet, and hides the fact that it is just a bunch of fetch quests extremely effectively.

I rather love it. I love that the day/night cycles really change the behaviour of everyone in this little world (and you can sleep to whichever time of day you need it to be), even though it's ridiculously dark at night. I love the way Tilo scampers on all fours when he runs, even though the sprint stamina is far too brief and takes far too long to refill. I love finding a secret tunnel through gained skills, even though the maps are abysmal and unlabeled. Gosh, it could be a lot better, but I really enjoy playing what it is.