God’s Trigger killed me at least twenty times in five minutes. Announced at Gamescom this week, it’s a new title from Techland that plays out very much like the two-player cooperative take on Hotline Miami that the trailer suggested it might be. You can see that trailer below, followed by my thoughts after fifteen minutes of play and another forty or fifty bloody deaths.

It’s the speed and the one-hit kills that are most reminiscent of Dennaton’s spree simulator. Enemies with melee weapons sprint across the trashy bar where the demo takes place so quickly that you’re likely to be in bits on the floor before you can react, and bullets occasionally litter the screen and turn it into a hell of precision dodging and weaving. It’s startlingly fast and initially seems unforgiving, but the extreme violence and top-down perspective aren’t the only elements that bring Hotline Miami to mind. God’s Trigger also knows it’s best to treat death as a comma rather than a full stop. 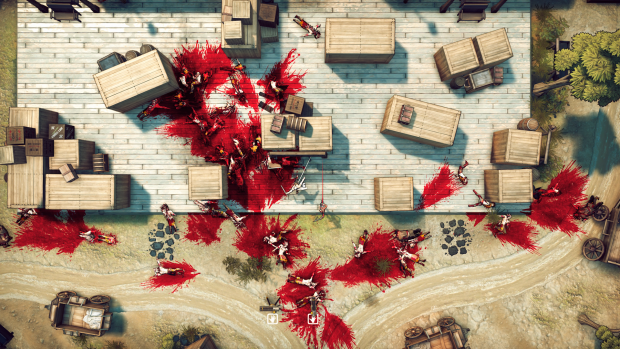 I don’t fully recall the music, because I quickly ditched my headphones so I could chat with my coop partner, who I’d met just a couple of minutes before we started playing. At a pinch, I’d say the soundtrack involves guitars. The guitars might be wailing in some fashion. Whatever the case, I didn’t walk away with a dreamy bassline bouncing around my skull as I did the first time I played Hotline Miami; I came away humming Chumbawamba’s Tubthumping because getting knocked down and getting up again is the flow of God’s Trigger.

Death is a minor inconvenience thanks to a friendly checkpointing system (clear a room and you’ll never have to clear it again) and rapid respawns. Blink and you’re back on your feet. Unless, of course, your partner is still standing, and running and gunning, in which case you’ll start to bleed out. Like everything else, healing a wounded buddy is a quick process, probably taking a couple of seconds, but the pace of the game is cranked up so high that it feels like you could go to medical school, graduate, take your partner through triage, and personally fix them up in an operating theatre in the time it takes to drag them back to their feet.

Just to be clear on this point, God’s Trigger moves at a rapid clip. It’s a sprint not a marathon. Its pedal is very much to the metal. 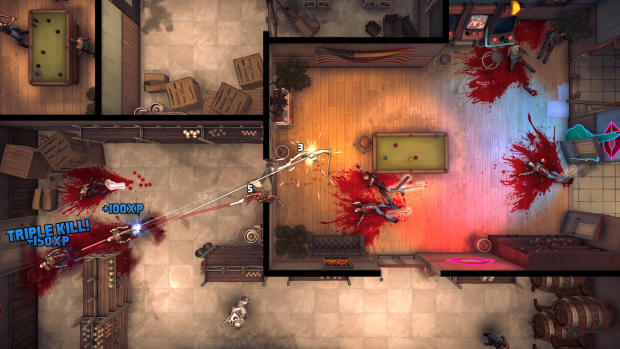 And it works, at least for the duration of this limited demo. I was soon falling back into the same patterns of movement and targeting that Hotline Miami ingrained deep into my muscle memory. So much is familiar, from the fountains of gore to the way doors can slam enemies in the face, stunning them. But the cooperative element changes things up enough to give the game its own character, as do the actual characters.

One is a demoness called Judy and the other is an angelic warrior from heaven called Harry. They don’t look particularly angelic or demonic, but they have fancy supernatural powers that allow them to blink across rooms, throw enemy-crunching vortexes, and grab nearby scenery or people with hooks and chains. These powers are layered on top of melee weapons and firearms that can be collected from the baddies you burst, and there is a neat level of split-second tactical decision making as you weigh up all the hardware at your disposal and figure out who should take what. 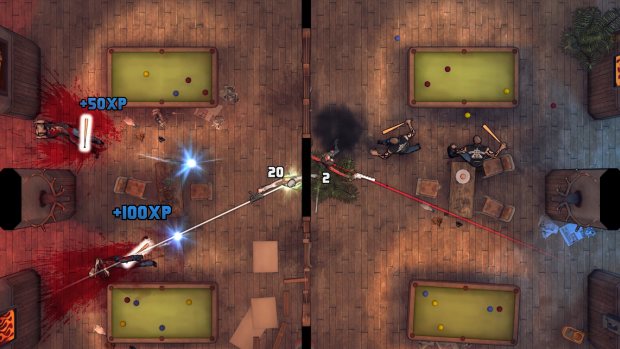 None of that is as important as the fact that the demoness is called Judy and the distributor of divine bullet-y justice is called Harry. They should be running a teashop in Fleetwood.

But they’re not. Maybe they were before the four horsemen of the apocalypse showed up. I’m not sure if the people I was killing (and who were killing me) were members of a cult, possessed, or just incredibly angry, but Harry and Judy are the mis-matched pair trying to save the world. That involves stabbing and shooting lots of people in a bar.

God’s Trigger will support local coop as well as online, and there is a singleplayer mode, but Techland describe it as a “coop first” game. Based on my experience with it today, I can’t imagine playing alone would be particularly rewarding. Both characters are still in play and you switch between them by pressing a button, and I imagine if I were solo, I’d just end up dying a hundred times instead of fifty. 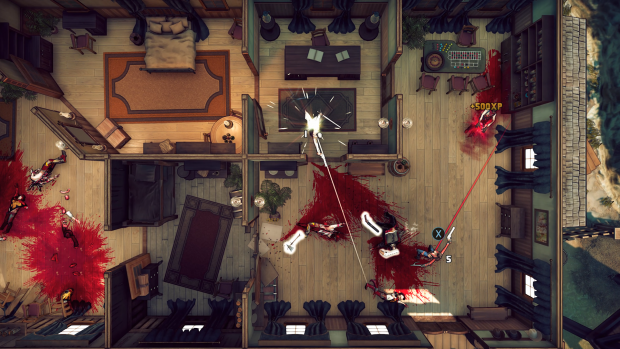 The idea of playing through with a friend is appealing though. I miss the twitchy violence and eternal rebirth of Hotline Miami and God’s Trigger makes the partner system more than a simple gimmick by adding slow-mo bullet time as a reward for simultaneous kills, and there’s a proper sense of having to work together and communicate in chatter that has to be as quickfire as the actual game.

I want to fight the horsemen with Harry and Judy. If we win, maybe they’ll be able to go back to the teashop, where we can all have a nice brew and a slice of battenberg.

God's Trigger will be released in early 2018.