Right now, there’s a room in Buffalo Grove, Illinois that's as quiet as a grave. The power is off, the robotic limbs are becalmed, and the once thumping presses are depressed. The Steam Controller assembly room is assembling no more, and with the recent Steam sale clearing out all the stock, the grand experiment is over.

It’s the final part of Valve’s great Steam Machines undertaking to be shut down. They’d hoped to convince you to have a PC in the living room, or a small box for you to stream your library from your main PC. The Steam Machines never took off, the Steam Link box was discontinued a year ago, and now the Steam Controller will no longer be made. Gone, but not forgotten.

The Steam Controller made a fan out of me. It freed me from my PC a little, and made me enjoy joypads again. All of them, not just Valve's. I now own three Steam Controllers, and a pair of official Xbox One and PS4 pads, and it's all down to Gabe's big-eyed, owlish experiment.

It had an impossible task. It was meant to be a bridge between Steam’s huge library of keyboard and mouse focused games and the slouchy comfort of the living room. That’s like fitting 30,000 square pegs into one round hole. And Valve tried. They really did. If you set their pad down beside any other piece of gaming hardware, it stands out as an attempt to redefine gaming's wheel. The scoop-shaped controller is the inverse of everything that’s come before.

Trackpads where you’d expect sticks. A cross of buttons instead of a D-pad. Paddle triggers on the back. Valve only stuck a thumbstick on there because people were lost without it. It's a jack-of-all-games, meant to let you comfortably smash out some Brawlhalla before thoughtfully tending to your space-empire in Stellaris. It was my go-to controller for any driving game, and it saw me through a lot of Fallout 4 and The Witcher 3. I even managed to get Arma 3 working with it.

Really, it’s the trackpads that will get you. If you’re too used to thumbsticks you might never be ready for the trackpads, but I fell a little bit in love with them. The first time I picked up the Steam Controller was the first time I could use a joypad to play FPS games. Tweaking the thumbpad gave an amount of precision I'd never had with a controller, and though I've never played anything competitively with it, with this I could play the Long Dark from my sofa.

Initially, the left pad is a D-pad and the right pad is set-up as a virtual trackball, so you can flick your view around as if you were spinning a ball with your thumb. But from there it doesn’t take a lot to make either pad work like a mouse, or a joystick, or to augment the joypad’s gyro for precision aiming. You can assign very specific sections on it to in-game menu items, or sprint zones. You can string button presses together into a tap on the pad, or shift the whole thing into an entirely different set-up for vehicle control. You can build interactions beyond what the mouse, keyboard, and in-game options would allow.

On the other hand, anyone that has spent time tuning and tweaking a Steam Controller profile automatically has my respect. The back-end may be amazing, but the UI tries to smother it with a pillow. It isn't secret sauce; it’s a secret menu of exotic, squelchy treats with too many eyes. The ugly/deliciousness ratio is off the charts, and it's further mired in Steam’s Big Picture UI. Even basic things like clear labelling suffer in this mode. Valve leaned heavily on the community, providing sharing options that enable people to snatch heavily tweaked profiles from each other on Steam. I learned a lot from those, even if it was often like being handed the software equivalent of your friend’s second controller - the one with the transparent case, buttons with five different modes, and a strangely sticky surface.

I wish that Valve had tried a bit harder to help people get to grips with Steam Controller. Only a couple of months ago they added specific configurations for the top 100 games people play on Steam Remote Play. Conversely, if developers didn’t craft a profile for joypads, people were left with generic templates to use, which meant having to eventually roll their own. It seems unfair, but I guess everyone has a phone in their pocket.

Valve continually looked for ways to improve Steam’s general joypad support via the Steam Controller software, and while it undercut Steam Controller itself, it was was to everyone's benefit. Steam Input is the legacy that the experiment leaves behind. The API enables Valve to natively support all kinds of official and unofficial controllers, and the PS4 and Xbox controllers are better on Steam than they’ve ever been. You can go to Steam right now, plug in a PS4 pad and add Overwatch to the library via the “Add a non-Steam game to my library” menu, and find a community config for it. That’s two proprietary elements working together in Steam, which is sort of amazing. 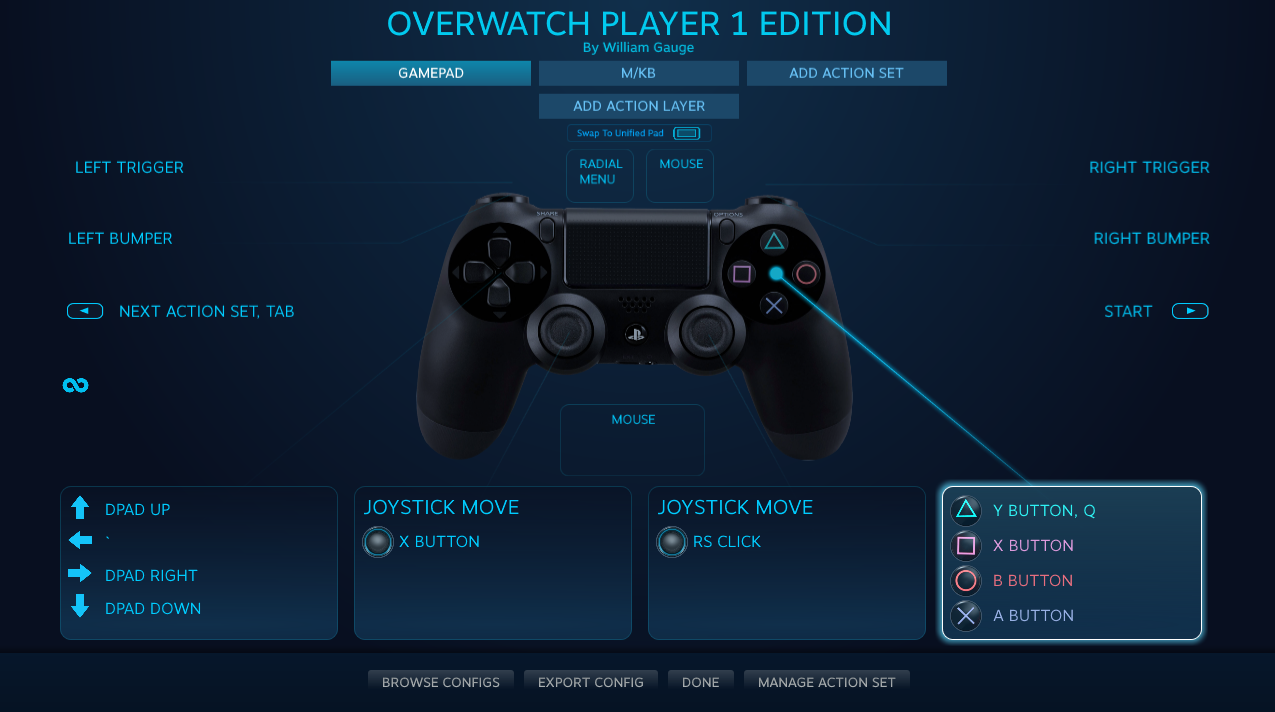 So, the hardware may be gone, but it made an impact that really can’t be overstated. Without the Steam Controller, I doubt Valve would have put the effort into Steam Input that they did. My hope is that the rumoured Steam Controller 2 appears, though I suspect that's a hope I should give up on. A more reasonable one is that Valve’s spirit of experimentation leads them to enable Steam Input on mouse and keyboard, joysticks, and whatever people are shoving into their USB slots for pleasure these days. Until then, I'll cherish my Steam Controllers.