Gorogoa feels like a sort of magic that might fall apart in the understanding. It's a beautiful story in which you solve puzzles more by instinct than deduction, and their solutions feel as magical as the process. Its impossibly overlapping world weaves a delicate fiction that stretches beyond the boundaries of its central conceit.

The conceit being, a two by two grid of squares, with individual images fitting into each, possible to swap around, overlay, and interconnect, to solve its gentle, astoundingly satisfying puzzles. For instance, you might have a scene with a tree in one corner, which can be zoomed out from to reveal a rooftop, on which stands an empty archway. In another window there might be a domestic room with a doorway on the back wall. Drag and overlay the archway over the door, and it becomes an entrance to the rooftop, through which the game's protagonist can travel. Now perhaps zooming out further from that rooftop you could see a walkway that intersects with yet another image, so you line them side by side, and he walks across. That's the game at its most simple, before it starts introducing vividly complex - yet somehow always intuitive - interlocking, multi-layered, pan-dimensional gorgeousness. 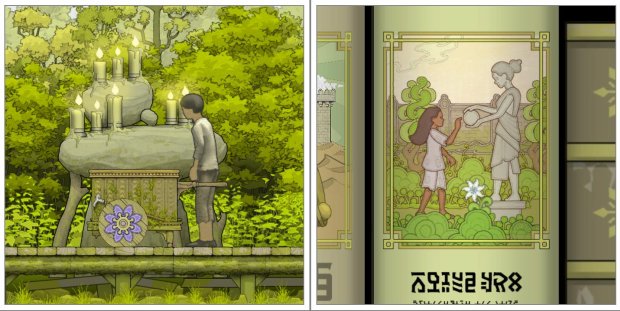 Those are the two most important ingredients here. Over the years we've seen and played snippets of Gorogoa, it's always been beautiful - a hand-drawn style of pencils and watercolour, exquisitely well animated. But would it be intuitive, or would it descend into a bemusing muddle, too many elements to balance at once, too much fiddle and not enough direction? It did feel like it could easily have gone that way. For one tiny moment as I played, I thought it was about to. And then, perfectly, utterly perfectly, it does not. What could have become a frustrating mixture of too many connecting parts never makes that mistake. I'm not sure how, because good grief it was hard enough to write the preceding paragraph without tripping over my own fingers, but I never lost a sense of being in control. Some solutions took me slightly longer to fathom than others, but I never felt annoyed, and most importantly, never felt like I was just dragging every tile on top of every other until something aligned.

And it's worth noting it's much more beautiful than it was before. The versions from 2012 and 2014 that we'd seen were already lovely, but this is something else, with lots of the art and puzzles from those earlier builds nowhere to be seen in the finished version. It's also a pleasure to report that it's more than just the extraordinary gimmicks - there's a carefully told tale of a person's life hidden throughout, that's all the more poignant for the subtlety and unobtrusiveness with which it's delivered.

There aren't any words that can appropriately convey just how magical that is, so have a look at this little snippet from mid-game:

It's short. You'll get through it easily in a couple of hours. But it's also the length it really needs to be. To keep going would have been to start repeating itself, or inevitably stumble into that overly complex place it so meticulously avoids. Perhaps there was room for more ingenuity, more surprises, but by the time it had finished I felt like I'd eaten a delicious meal, my appetite sated. It's a lot at once, and so sumptuously animated throughout, that its brevity is a bonus, not a loss.

More than anything, the feeling that dominated throughout was one of magic. Its impossible logic made so much sense, its undimensional structure somehow coherent, so long as you allow yourself to float between the solving and the unsolving. It is that suspended place, between confusion and understanding, reality and impossibility, that makes Gorogoa so bewitching and enticing.

Gorogoa is out on the 14th December for Windows via Steam and GOG.