If you click on a link and make a purchase we may receive a small commission. Read our editorial policy.
Developer: Creepy Jar
Publisher: Creepy Jar

Day 4 in the jungle: I’ve adopted a diary format, as to cleverly convey basic information about the game I’m reviewing in a thematic way. Today, as I neared the summit of moss-slicked ridge on the outskirts of a fuggy mangrove swamp, I encountered what can only be described as a discovery that will shake the very foundations of ornithology.

A flock of brilliantly coloured birds, flying in a such a way as to spell out: “Green Hell is a first person survival game set in the Amazon rainforest. You play amnesiac American anthropologist Jake Higgins, as he attempts to brave nature, build shelters, hunt and fight, find his missing wife, and avoid eating so many poisonous mushrooms that he craps himself to death.” Truly, we are but mewling babes in the face of nature’s many undiscovered permutations. 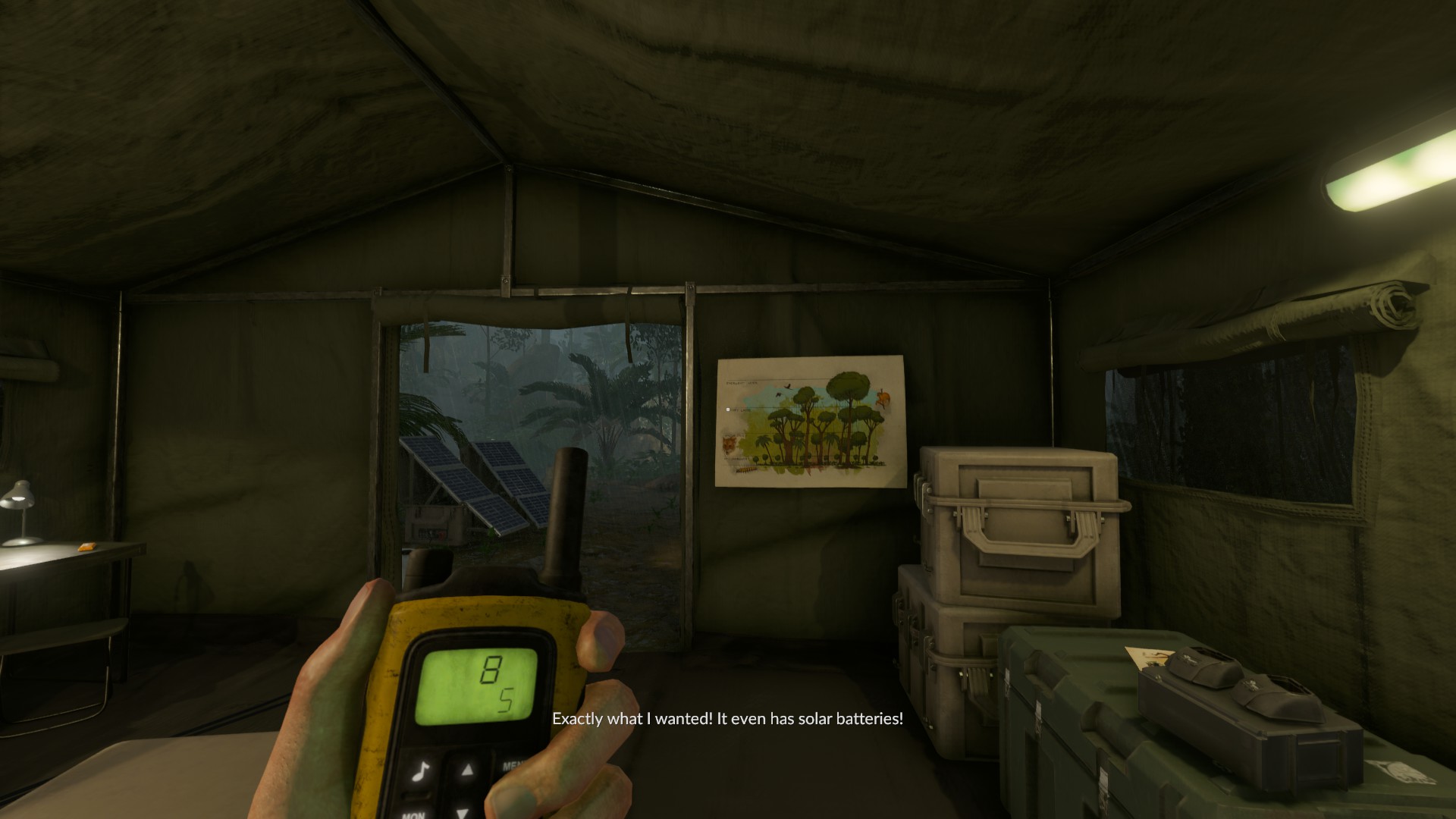 Alright, enough of that. So: survival in Green Hell means micromanagement. You’ll be monitoring your vitals with the help of two nicely diegetic UI elements. First, there’s a watch which triples up as a compass and a macronutrient tracker. The tracker has colour-coded quadrants for proteins, carbs, fats, and hydration, all of which are gained in different quantities from scarfing various foods. Let any macro fall too low, and you’ll suffer health penalties. Hydration, naturally, tends to deplete quicker than the other three. Also, the watch is quite swish, I suppose, if you’re the sort of person who owns an Elon Musk body pillow that tracks how many times you scream in your sleep.

The second UI menu is a sort of quartered vitruvian man icon where you can inspect both your arms and legs, twisting them around to check for leeches, bites, and other wounds you get for being rubbish at nature. Leeches tend to latch onto you when you walk through water, and slowly drain your sanity meter, an effect I was not aware leeches had, so you’ll need to manually pluck them off. You can restore your sanity by doing opulent, coddled things like eating canned cheese and sleeping on real beds, but if it gets too low, you’ll hear disparaging voices and the screen will go black and white. Nuanced! 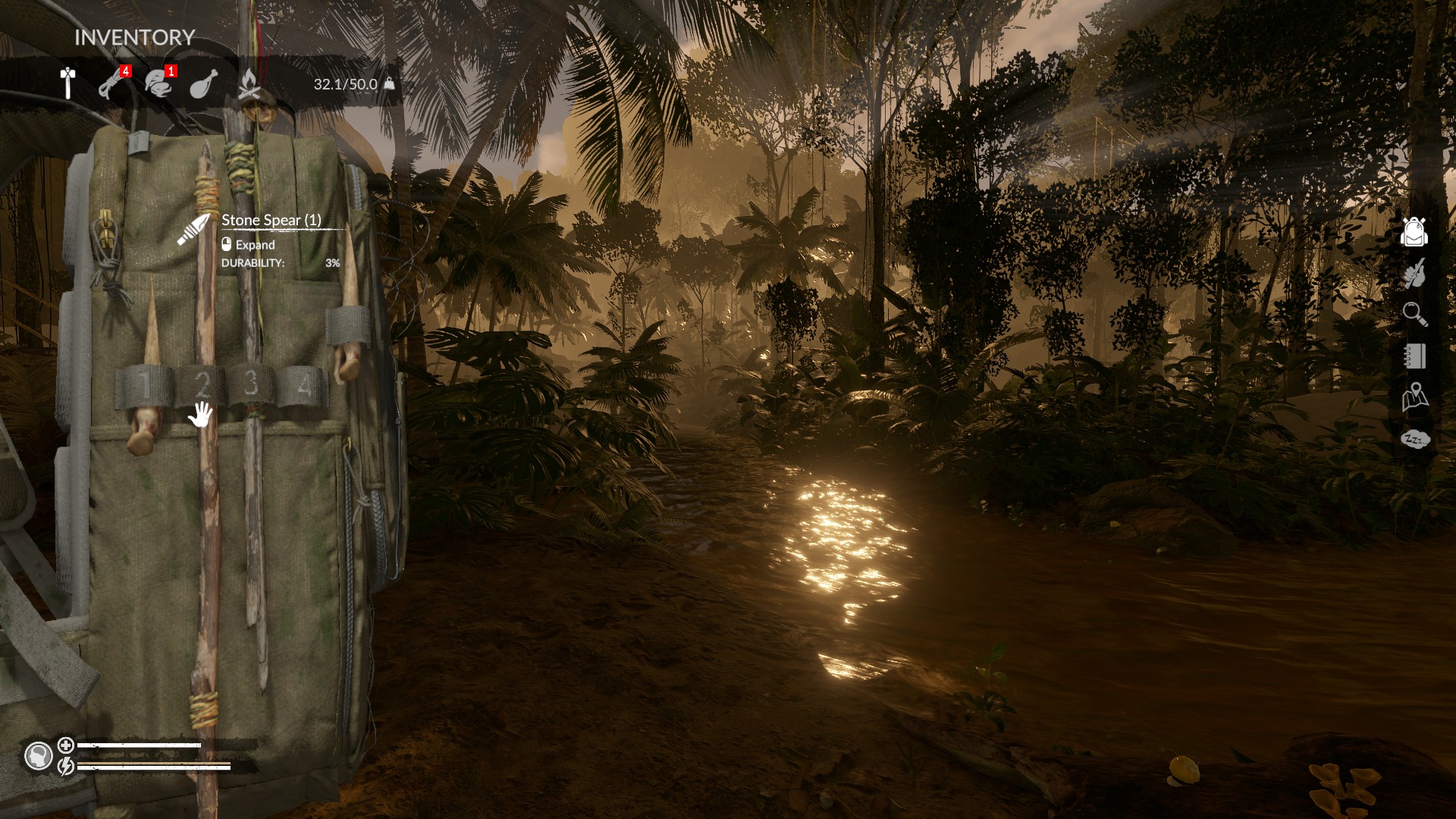 A snake bite might inject you with fever and slow acting poison which, depending on the difficulty level, will possibly kill you unless treated with a medicinal bandage. Need I also remind you that this, mate, is the jungle, not one your millennial ‘Boots’ shops, so you’ll need to be craft both the bandage and the medicine from the appropriate plants.

So, what we’ve got here is a system that simulates the consequences of horrible illness through a tactile UI. Or, if you prefer, ludonarrative dysentery. Not only is it tangible and cogent but, if you’re like me, and get squeamish about the way arm bones move, really uncomfortable. This diegetic UI job extends to your inventory, where you’ll open a backpack that has its own compartments for sticks, weapons, herbs, food, and ropes. It’s just one example of an overall attention to detail that makes performing even the most mundane actions far more enjoyable than they should be. 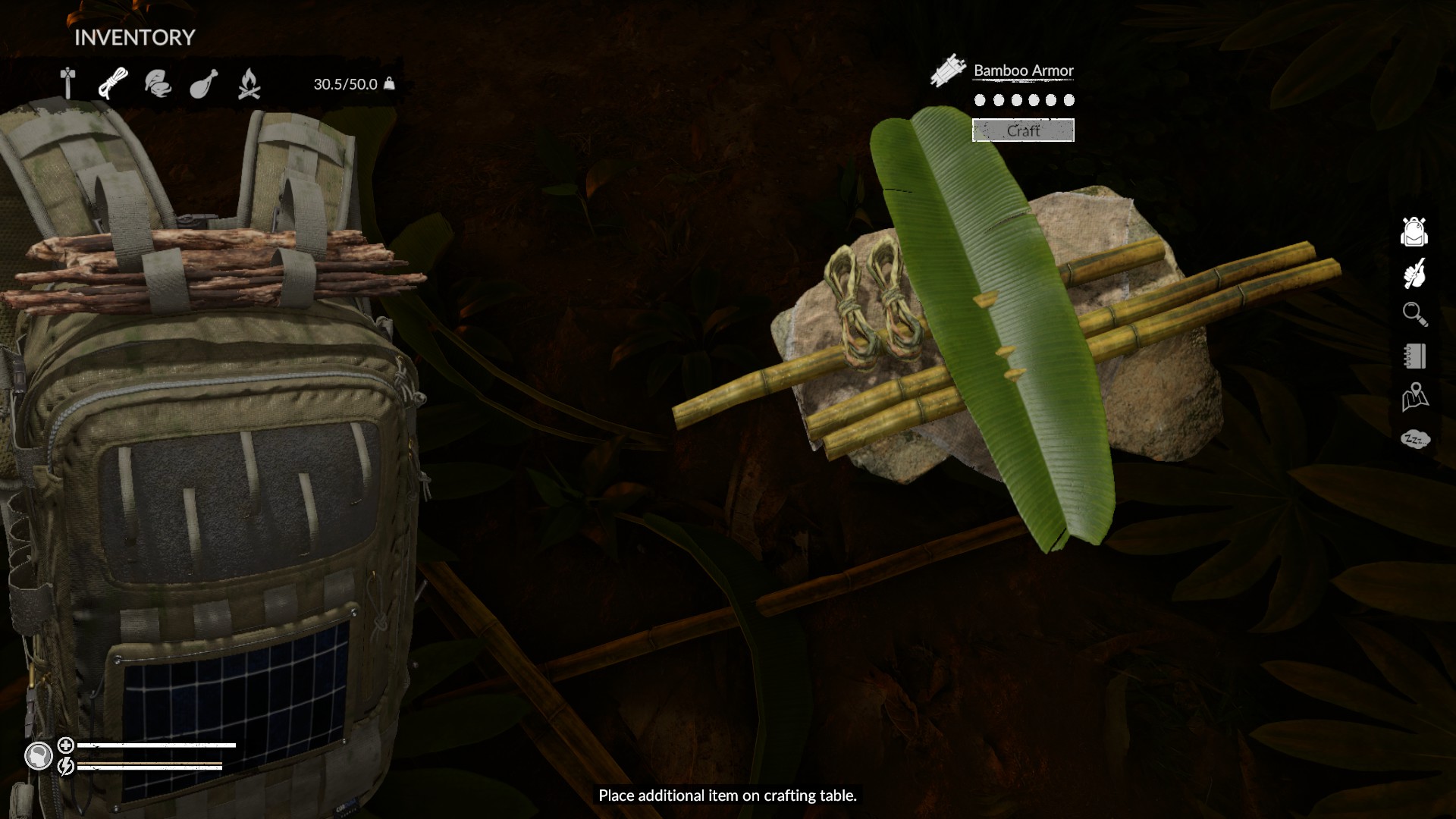 One of the best things about the crafting system is the multiple uses some objects have, and probably the best example of this is the humble (but secretly arrogant ) coconut. Wild coconuts have a green shell you’ll need to hit with something to open. After you’ve cracked it, a world of coco-possibilities await you. You can drink the coconut water, open the coconut, either eat the flesh raw or cook it, use the empty coconut shells as makeshift bowls to collect rainwater or make soup in, or tie a rope around the coconut to make a flask. Many other items are similarly versatile, although crafting recipes often tend to strike a balance between intuitive real-world solutions and slightly obtuse adventure-game logic. I recommend consulting a handy crafting guide. I did, and I’m a better man for it.

So, between the variety of illnesses and wounds, the constant hunt for nutrients, and the occasional wild animal or tribesperson attack, there’s about 10 squillion ways to get deaded at any one time. With the genre, I find the tension of survival mechanics can sometimes act as a smokescreen - everything feels exciting and interesting because you’re under threat, but remove these harsh mechanical consequences, and the world often lacks coherence or beauty or any real sense of place. Among Green Hell’s many custom difficulty settings, there’s an option to play with survival mechanics switched off entirely, so you’re free to just explore the jungle and build settlements. To me, this indicates confidence on Creepy Jar’s part that the environment -- and in story mode, the, um, story -- is worth experiencing on its own terms. It’s actually a well-placed confidence. Green Hell’s Rain Forest is lush, and vibrant, and all the other words people usually use to describe very nice trees. 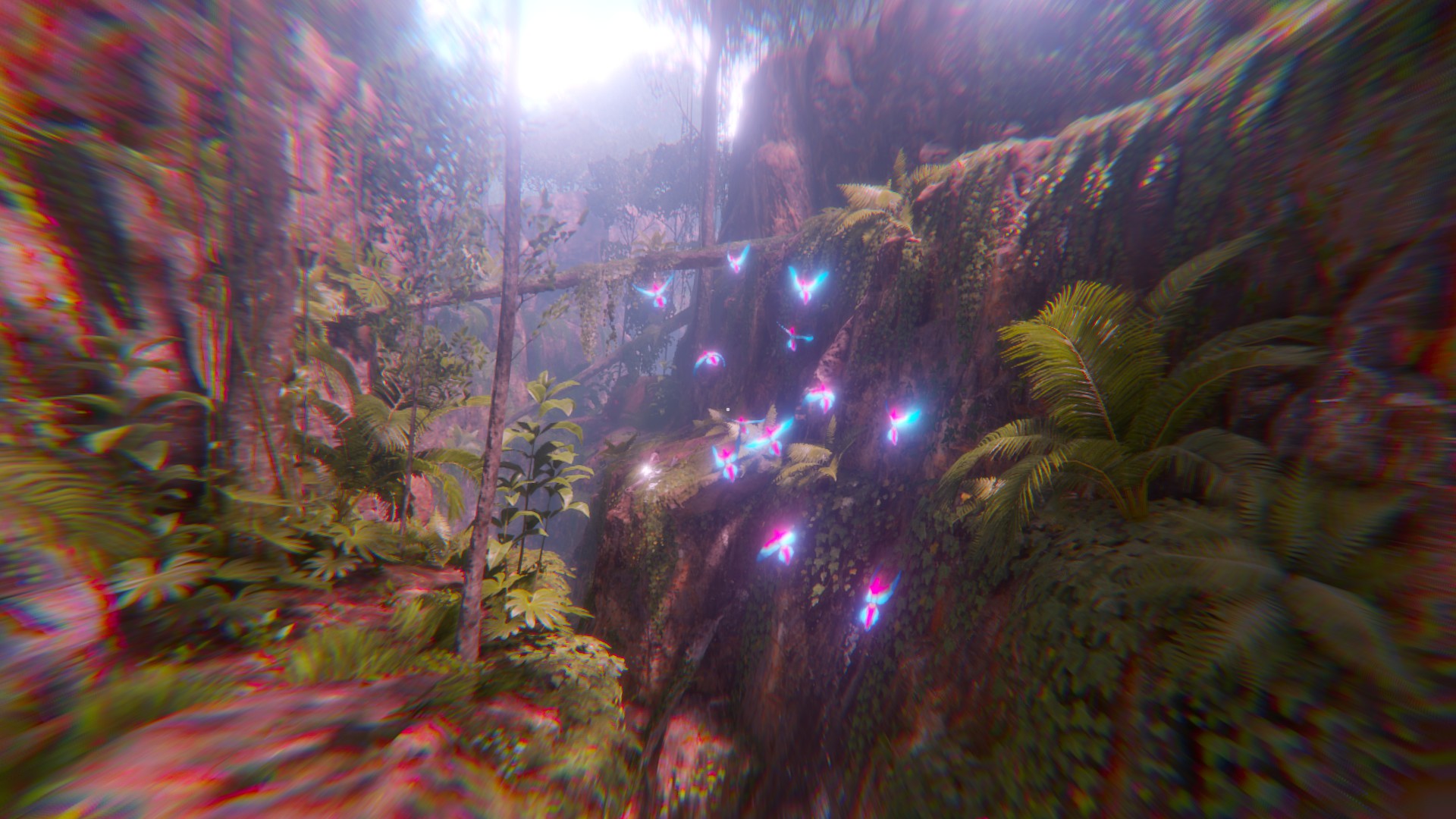 The wildlife, in particular, is a real highlight. It’s always a treat to have the endless green pierced by flashes of brilliant colour from an animal visitor. All ur jungle faves r here. There’s armadillos! (Crunchy on the outside, devious criminal rats on the inside.) Tree frogs! (Colorful and chewy, like slimey skittles.) Tapir! (What? I hardly even know ‘ir!) The law of the jungle goes thusly: If you can see it, and you can hit it with a rock on a stick until it stops moving, you can cook and eat it. You can even make armour from armadillo carapace or gather rainwater in a tortoise shell. Then, when you’ve wiped the last specks of tasty tapir grease from your chin, you can craft a spear from its bones and use it to kill the tapir’s children, just like in that Lion King song, I assume.

But then what about the story mode? It took me about fifteen hours on the slightly easier than normal custom difficulty I used. (As John Walker -- RPS in peace -- pointed out in his preview, the nutrition demands the game makes of you on its default setting are a bit much, but easy mode removes them entirely, which is no fun. Custom is the way to go for a first run, I think.) Story progress is structured to segment areas and objectives as to provide discrete pockets of open, survival gameplay strung together with more linear story sections which can, nonetheless, often be finished in different ways. The environment itself strikes a nice balance between areas that feel handcrafted to guide the player, and areas that may well also be handcrafted but feel wild and unpredictable. You could, if you wanted, ignore the objectives completely and just live in the first camp you build. Me, I like having objectives other than ‘stay alive’ because I already do that every day, and it is, quite frankly, a massive hassle. 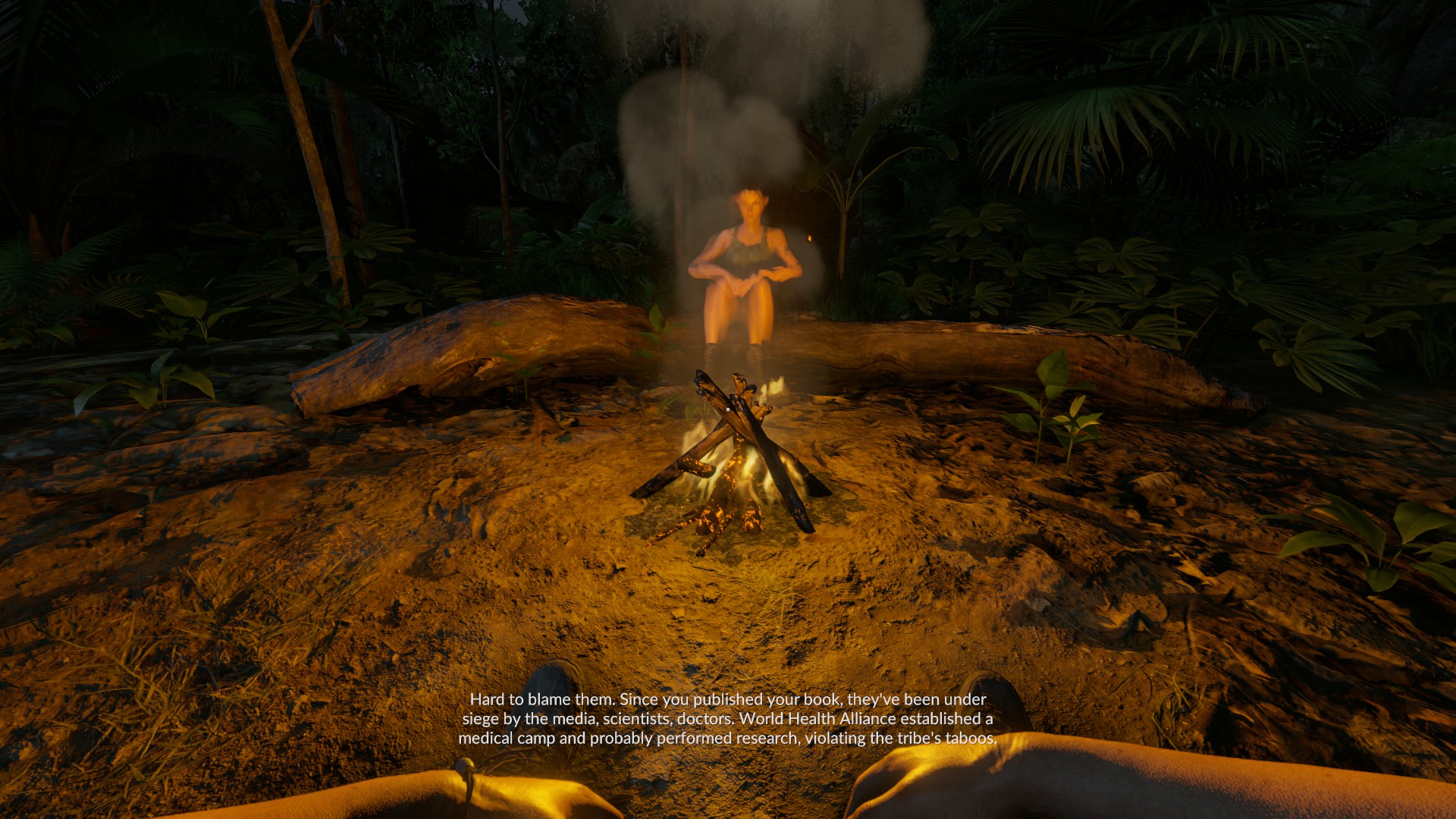 The plot is presented well. The voice acting is good. There’s some ayahuasca trip cutscenes that are beautiful and dramatic. It’s reminiscent of a smarter, more human, more grounded Far Cry, one written by and for people that have a frame of reference that extends beyond other video games, and also people that aren’t afraid to explicitly condemn their shitty protagonist when necessary. There’s a clear love for flora and fauna and wildlife and anthropology instead of aggressive pud-tugging over different types of assault rifle. What surprised me most was how it manages to transcend the pulp exploitation aesthetic a game called Green Hell might suggest. Mostly.

If you’ve seen the Steam trailer, you’ve seen that the game features whooping, bounding, aggressive tribes painted up like skeletons. Reviews editor and Roman Ouija board meddler Nate pointed me in the direction of a 1940’s Vincent Price film of the same name, and a more recent Eli Roth with some superficial similarities. I won’t lie, I went in expecting some bullshit. Half joking, half praying for the possibility of a ‘white phosphorous moment’ that subverted the “poor white rich guy gets lost in the spooky jungle with scary savages” it seemed to be going for. 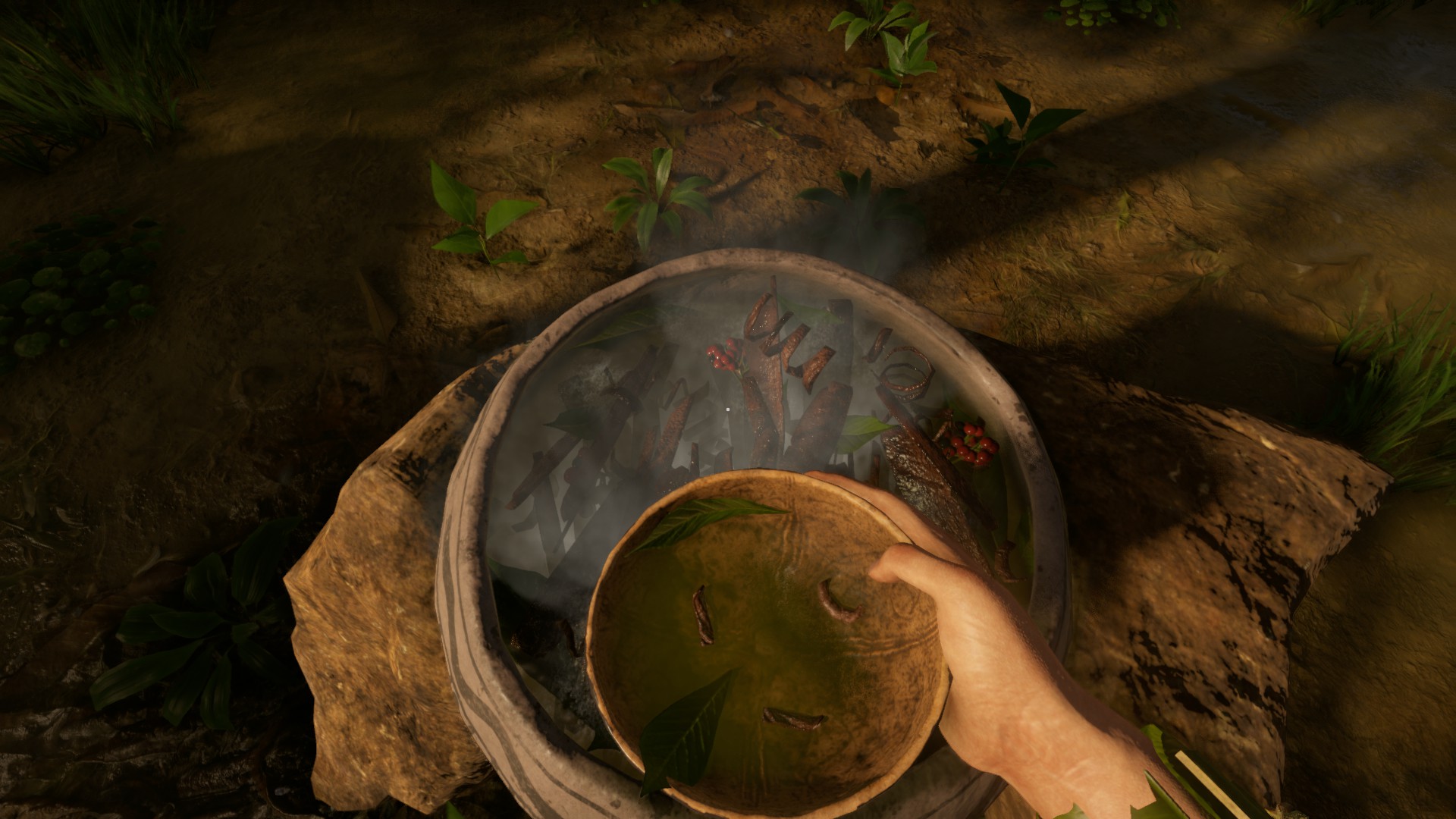 Well, it’s only got one of those, hasn’t it? It’s still a bit silly, and a bit one dimensional, but yes, it does at least flirt with postcolonial theory, about white people sticking their Ray-Bans where they don’t belong. Overall, I think it’s still too focused on ‘what white people think about tribal society’ than ‘what tribal society thinks’, and yes, since the game’s advertising still relies on ‘spooky savages’ they could fairly be accused of having their capybara and eating it. But hey. It’s not an absolute shitshow.

As well as the story mode, there’s yer survival mode, and a variety of challenges like ‘build a really snazzy village’ or ‘get your radio back from the tribe’, which let you spend time focusing on things like crafting, building, and combat. Aside from the plot, I’d say most of what held my attention about Green Hell was how dazzlingly beautiful and technically impressive it was, but the more traditional survival elements are all solid enough that I look forward to playing more. So, it turns out that the jungle does indeed got fun, games, and whatever you may need, providing what you need has a very strong stick component.