Grimoire: Heralds of the Winged Exemplar [official site] is a 90s-style roleplaying game in the vein of the Wizardry and early Might & Magic series, and whose one-person developer has spent the last two decades working on it. In equal parts revered and notorious in hardcore cRPG circles, it's a game that many believed would never see the light of day. But here it is, real and complete, made and promoted with all the highly outspoken passion that, online at least, often seem to characterise the most devout of old-school RPG fans.

With a single playthrough estimated as requiring up to 600 hours, the learning curve incredibly steep and folk who have lived and breathed Wizardry for decades the target audience, nattering about Grimoire here is not straightforward. Let's give it a go.

As someone who played any number of early and mid-90s cRPGs but did not subsequently make them a continuing way of life, I've found a few hours with Grimoire to be part comfortingly familiar and part oppressive. I know, innately, how to navigate around its maze-like first-person world, how to have a party of complimentary disciplines and I readily grasp the major skill archetypes - what a mage needs vs what a warrior or thief needs, and so forth. I can figure out the icons for identifying new gear or scribing new spells, I know to use magic to immobilise one enemy while my tanks tangle with others, and I can take note of a clue found there that will open a lock here.

In other words, it's a game that I'm certain I would have been able to figure out all by myself, if only its combat wasn't so unforgiving. I say that not from a 'waah, it's too hard' point of view, but from one of feeling I'm being blocked from meaningfully learning how to play well because the brutal spankings didn't offer any insight into what I'm doing wrong.

Using third-party guides tell me that it's been much to do with the make-up of my party, and creating a 'correct' one requires grinding for the right dice rolls at least as much as it does choosing stats carefully. You cannot go into this unprepared, but even once I'd done the research, it would throw punishing fight after punishing fight at me, with constant savegame maintenance my only recourse.

This is this intention, because difficulty is considered a hallmark of early/mid-90s PC gaming, of course, although I feel this pushes it even further. Other such hallmarks cover Grimoire from top to bottom. There are no tooltips, context menus or help screens, in addition to the Super VGA-style graphics and unbearable cod-MIDI soundtrack. It also, currently, means a raft of compatibility problems with high resolutions and no real alt-tab support. (I even struggled to find an easy way of screenshotting the bugger, which is why some of the images in this piece are promotional shots).

There is a specific kind of 90s game this wants to be like, and foremost of those is The Wizardry series, particularly part VII. It's considered an abiding high watermark of roleplayingtvideogames by a certain sect of players, some of whom you may have occasionally stumbled across offering their deep disdain for contemporary RPGs. For the rest of us, Wizardry and Grimoire both are heavily statistical games set in large environments, using a large party (up to eight, in Grimoire's case) of custom-designed characters with a staggeringly wide range of specs and abilities and total player control over their progression. 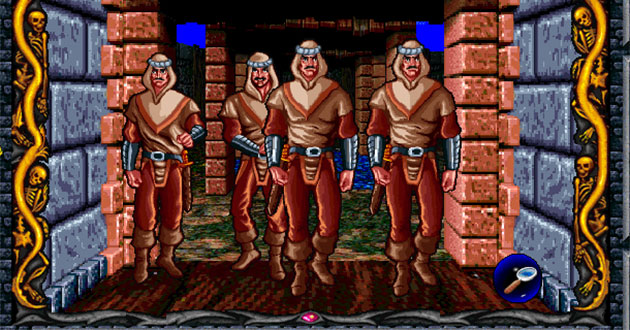 The perspective is first-person and movement tile-based and in 90 degree rotations (similar to The Legend of Grimrock, for a more contemporary but far more accessible point of comparison), combat is turn-based and secrets and riddles are everywhere.

In perhaps the greatest divergence from what we now call RPGs, your team of characters have no personality whatsoever, let alone interact with each other: they are a set of tools for the player to wield with what must be expert precision. Though Grimoire offers prefab options, to get far you'll need to create your own characters, a lengthy and convoluted process with almost no in-game assistance.

Grimoire's developer has no interesting in modernising the Wizardry VII formula, but instead on creating what they believe to be an improved follow-up to it, aimed first and foremost at the closely like-minded. I'll note that no manual (though this was an essential staple of the age of game this seeks to revisit) was included with Grimoire at launch, though one is apparently forthcoming. This currently makes getting to grips with the game even harder than it otherwise would be. As I mentioned, I've used community guides on Steam to make some headway, particularly with regard to creating a semi-capable party - prior to that I was getting repeatedly murdered by insects just a few minutes into a campaign. 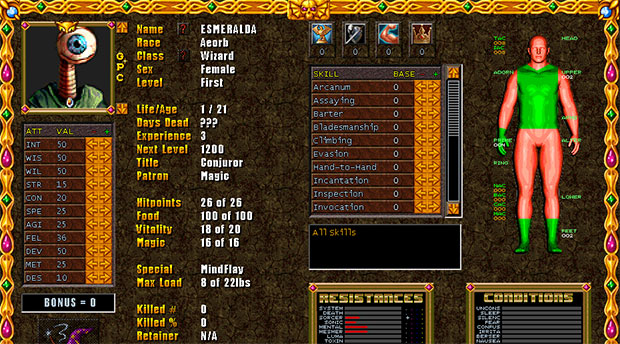 It's not the brutal defeats, but rather the unwieldy interface that has proven to be my most daunting enemy, however. The initial inscrutability I can fiddle and research my way through, but even once I'd done that, I found that almost every action and interaction involved too many steps, too many tiny buttons and/or otherwise takes too long. I'm not sure this would be anything like the mooted 600 hours with a lessy doggedly DOSian UI. (I'm taking that 600 hours on faith, by the way - I will never get anything like that far into Grimoire, though I'm sure I would be singing a different tune were I a Wizardry true believer).

None of this is to say that a game that was for some years accused of being vapourware is any way a disaster - merely that, rather than being the shining resurrection of a golden age, it's preaching only to the converted. It swaddles the good stuff in so much timelost inaccessibility and unhelpfulness that it's never going to be heard far outside the old school RPG echo chamber. 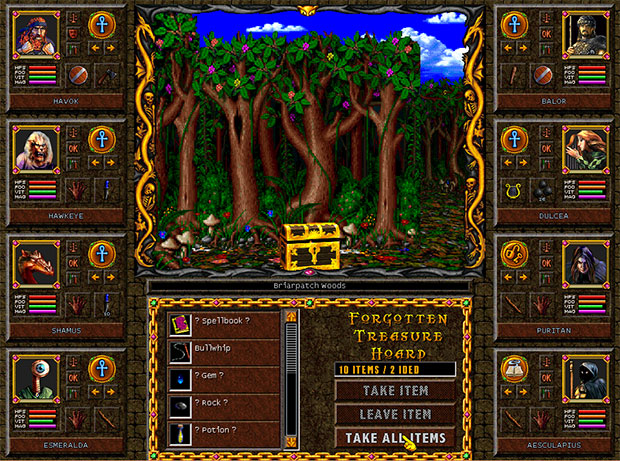 As for the good stuff, well, yes, there's definitely something here if you can find a way to crack the foot-thick nut. For starters, it successfully creates the illusion of an enormous world filled with mysteries and secrets. Accessing many of these requires great discipline and patience, while the tile-by-tile movement and random monster encounters make it feel much larger than it truly is. Nonetheless, there is that feeling of having stumbled into an unthinkably huge location - that roleplaying essential of A World rather than Some Places. Fantasy, sci-fi and even Geiger-esque nightmare scapes are all in the mix, creating an air of disorientating strangeness.

When I wasn't suffering from my party being slain by a trio of small beetles a couple of turns into a fight, I did feel absorbed by the strategic combat. Tanks taking hits, rangers and thieves dishing the damage, mages and bards on crowd control, a dragon-man breathing toxic fumes, a cleric running healing duties... My team of mutes, my weapons, all working in slo-mo harmony. But it's so time-consuming, so repetitive, the phrase 'no penetration' to denote no damage so common (and not funny after the twelfth time of reading). 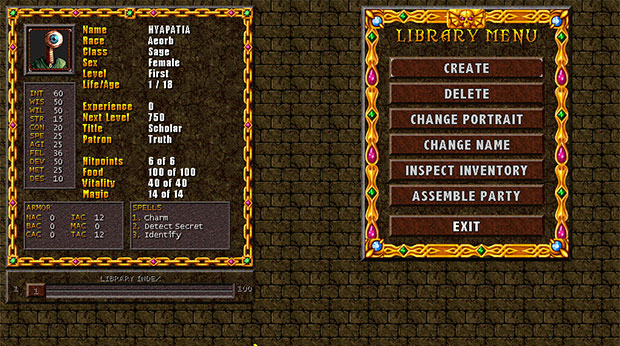 I enjoyed gradually figuring out mysteries, intuiting from words alone what some new terminal or station might be for. But I hated the tiny strip of icons that is my inventory, the hideously drawn-out process required to work out what anything was or how to use it, the constant sense that my time was being wasted by click-click-clicking through all these small arrows and icons and numbers to get anything done.

I appreciated the imagination and characterfulness that has gone into much of the art. It looks very much of the time it seeks to evoke, but there's a big, cheery cheesiness to its monsters and character portraits which tickles me. But the sound design is so monstrously wrong-headed that I had to mute the thing entirely. The hateful music is still audible with the slider set to zero, some enemies will repeat the same irritating sound effect on a rapid loop until they are dead, and all told it's like being tortured by some idiotic early-noughties police procedural vision of what videogames sound like.

On top of that, my savegames have been repeatedly rendered unusable and custom-made characters wiped by daily patches, and I cannot face grinding through the arduously clicky character creation process, let alone the early hours of a new campaign, yet again. To bear that, I would have to intensely love what Grimoire intensely loves. It'll settle down in a couple of weeks, I'm sure, but as much as I'm genuinely curious about what secrets and challenges it holds further down the line, it's unlikely I'll ever go back.

I admire the size of this thing, the vision of it, the dedication. The labour of love is clear, and I have no doubt that it is going to absolutely delight those who have flown the flag of The Olden Days Did It Best for decades. But I think of 600, 300, 100, even 20 more hours of my life spent this way, this glacial churn, and I cannot accept such a fate.

I'm glad Grimoire's real after all this time, I'm glad it's done what it set out to do 20 years ago, and I acknowledge entirely that its development began in a very different age of game design, that it has all been handled by just one man and, as such, certain expectations are entirely unfair.

Neither that or my curiosity about what it will throw at me next means that I can abide the grind, the desperately cumbersome user interface or the sound that makes me want to throw my speakers into the sea. I like Grimoire in many ways, but again, I would need to truly, madly, deeply love it in order to endure all that. I'm afraid that I do not.