Play GTA Online any time during May and Rockstar will wang you $500,000 of in-game cash within a few days. While that's not a huge amount of money on the scale of things, but it's a decent chunk for doing nothing. It won't buy you a new business or a top-end car but could help you save up. Or... you could use that free cash to buy an expensive alien bodysuit and join the delightfully daft alien beatdown gangs and green alien vs. purple alien wars that are raging across Los Santos this week.

As Rockstar explain, play GTA Online any time during the month of May and you'll get a one-time gift of $500,000 deposited direct to your bank account. It can take up to seven days to come through, though recent giveaways suggest some might get it a lot quicker (and some jammy gits might have a glitch give them it several times). Rockstar do these giveaways every now and then, and it's always a nice bonus.

Like I said, $500k isn't a huge amount in GTA Online but it's a fair chunk towards buying one of the big moneymaking businesses. Or you could go wild on clothes. Or pick up on a nice gun or two. I do note that there's a 40% discount this week on the Up-N-Atomizer, a space ray gun which gives objects a mighty physics shove - both great fun and real handy to free vehicles you've accidentally got stuck somewhere foolish.

But really, if the money comes through in time, you should get an alien bodysuit. I bought a green suit for a whopping $358k and don't regret the purchase. You can find them in any clothes shop under Outfits\Outfits: Arena War\Bodysuits.

While the novelty will doubtless burn out soon, right now it's fun to join the wholly pointless war and dick about with other idiots. People in GTA Online are usually either grinding or griefing, rarely just mucking about. I will miss this. While not every server will have a street brawl going, it'll likely already have an alien or two and other players are often willing to suit up and join in. 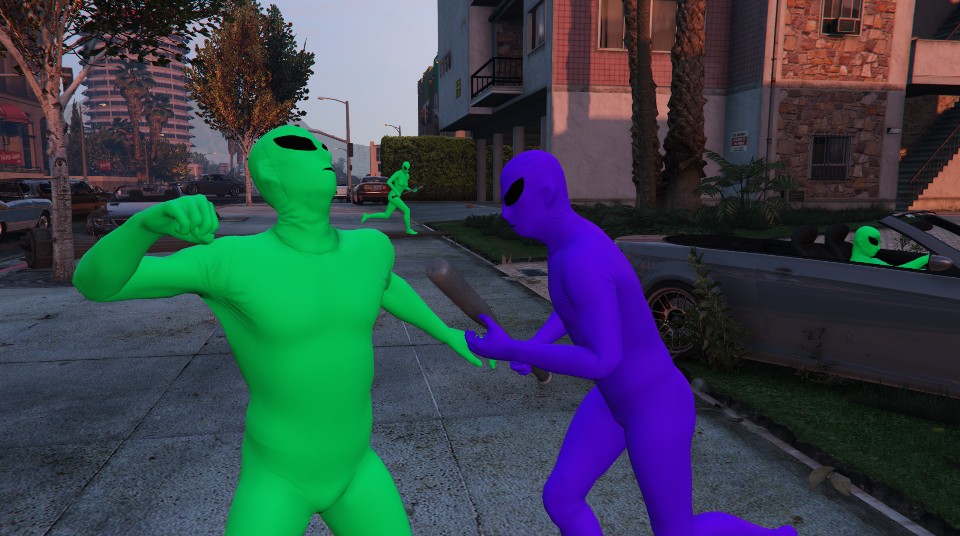 Now, the question is: should you be a green alien or a purple alien? The current craze was started by greens so they get some props for that, but purples are the ones who leaned into it and turned this adversarial. I went green because purples weren't yet on the scene but you, ah, you should think carefully before picking a side in this arbitrary conflict. Just don't be a Space Monkey or Republican Space Ranger.

Disclosure: I have some pals who work at Rockstar. I think. I'm pretty sure people not in my flat do exist. I THINK? Not sure anymore.