Grand Theft Auto Online's latest update - Arena War - invites players to join the titular big new televised event broadcasting from the heart of Los Santos. It's a PvP vehicular throwdown with its own playmodes, progression and special arena vehicles with their own customisation system. While free to dabble in, the real rewards are limited to players who put some GTA-bucks down on an upgradeable workshop allowing them to bolt guns, armour and Mad Max-ian gubbins onto their cars for the next fight. It's out now, and I hear a trailer revving up below.

While introduced via a cutscene-heavy mission, Arena War is all PvP modes, and all vehicular focused. There's twelve new cars specifically for this mode (although usable out in the city if you're feeling retro) with some aggressive upgrade options. The new modes include basic (vehicular) deathmatches and CTF, but others are more creative. While not allowing custom vehicles, Alice Prime took part in a Monster Trucks vs Armoured Minis battle, pictured up top before the tiny cars met their big cousins. Most modes encourage bodging together custom vehicles for each objective type.

Among those modes is Wreck It, a simple race around an oval track, but with guns, spikes, saws and not too many rules against using them. Probably the most creative mode is Games Masters. One team are on a checkpoint race, the other team are remote controlling the traps around the arena to try and eliminate or slow as many racers as possible. At half time, the teams switch places. Last is Tag Team, a team deathmatch with only one active fighter per side, with the rest of the team able to attack from the relative safety of the spectator box. The last mode is Hot Bomb - tag with explosives. If you're 'it' when the time runs out, you explode, so bump someone else to share the fun.

Some past parts of GTA Online required an expensive building just to begin dabbling in, so it's nice they offer the option to at least take a stock vehicle for a quick spin around the arena. That said, according to IGN's Wiki guide for the update, a basic no-frills workshop will cost you a hair under a million bucks, and $4.36m for the deluxe package. That's before picking up any vehicles, which range from stock models as low as $35k, or pre-modded monsters for as much as $3.87m. At least they're a nice looking bunch of cars, including a mine-dropping bulldozer-tank. 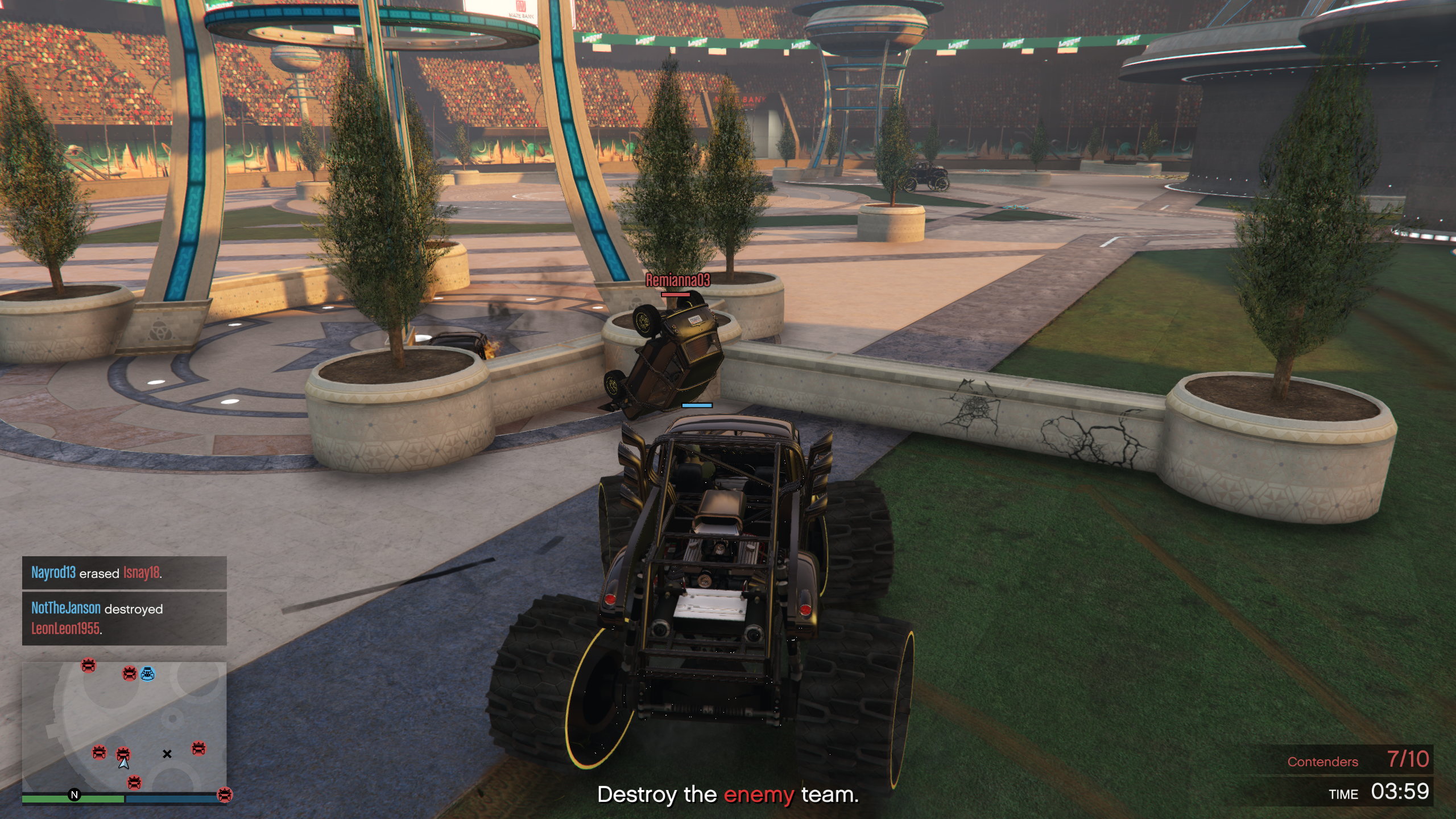 It looks like a rather good update, all told. Vehicular combat Twisted Metal style is something GTA could probably do a bit more of, and the chance to take your Mad Maxed-out vehicule for a spin on the city roads is tempting. It's just a pity that unlike previous PvP-centric updates you've got to put money down. A million GTA bucks isn't too bad considering Rockstar's regular in-game money giveaways, but fully investing in this mode can easily cost upwards of $8m - a potential rich kid's playground.