If Overwatch slash fiction existed [it obviously does - ed.], and there were posited romances between Junkrat and Roadhog [there are so many - ed.], then their lovechild [I believe that would be "mpreg" - ed.] would be Apex Legends’ newest character, Octane.

Masked, shrieking, obsessed with goo and stimulants, and sprinting on two metal legs after an explosion stole his flesh ones, Octane looks like he’s burnt out on Burning Man and acts like a drug-obsessed Roadrunner. He’s quick — much quicker than most of the other characters in Respawn’s first-person Battle Royale — thanks to a suite of syringes that he can jam into his chest in order to get a six second speed boost.

With his speed, he should be an ideal ganker, but I had trouble using him reliably to get the jump on enemies. Sensible Apex Legends teams stick together, but by using his ooze-injecting special move, I was leaving my own squad behind. Better shooters than me might’ve been able to hit the requisite headshots to kill an enemy before they had a chance to react, but using Octane’s special comes at the cost of a chunk of his own health, and too often I’d end up disadvantaged in a straight-up gunfight. Even if I was able to score that initial knockdown, I was then left at the mercy of their teammates, stuck in a two-on-one fight with my health drained and my clip empty.

Instead, I found Octane better suited to finishing fights than starting them. I modified my playstyle from ganker to closer, hanging back with my teammates, focusing our fire to down one or two opponents, and forcing the remnants of their squad to go to ground. Then, after the gunfire died down, clips were reloaded, and they thought it was safe to go for a revive, I’d slam my speed boost and burst from my own hidey hole, more easily able to manage a one-on-one fight against an unsuspecting enemy. 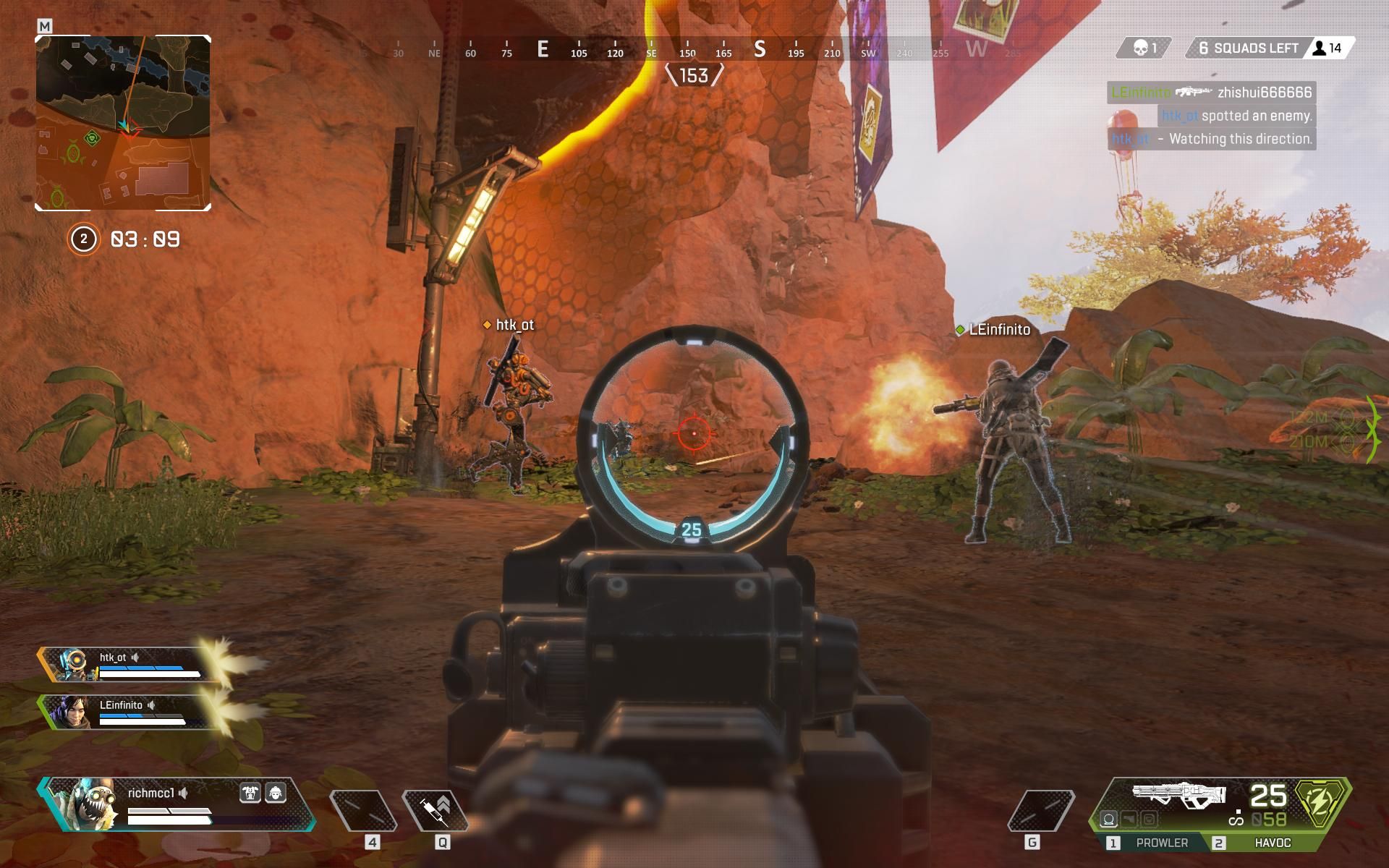 His bounce pad also has some less-than-obvious applications. On first blush I saw it as a personal manoeuvrability tool, thrown down to propel me up cliff faces and onto buildings without all that time-consuming climbing. It does work like that, sure, but then it’s just a less directable, less frequently available version of Pathfinder’s grapple rope.

I had more fun using it to add a spot of chaos to firefights. I started throwing a pad down in doorways and other tight spots and baiting enemies onto it, launching them into the ceiling, throwing off their aim, and making them easy pickings for me and my squadmates. There are some fun synergies on offer with other specials, too: I loved chucking a bounce pad into the cloud sent up by one of Bangalore’s smoke grenades, and standing back as hidden foes suddenly flew skywards like yowling clay pigeons.

This adds up to a manic playstyle that suits not just Octane’s human-can-of-Monster-energy-drink aesthetic, but also the pace of Apex Legends’ brisk battle royale. Speed is especially important in the seconds after your boots hit the ground, that short period of time in Apex Legends and its peers in which players do their best vacuum cleaner impersonations, sucking up every shotgun, clip, and anything else they can carry for sorting through later. Octane is built for this short game of supermarket sweep. I found I was even able to sprint up and swipe weapons from under enemies’ noses, spamming the E key as I ran past opened crates, nicking the gun they were about to pick up and turning their prize against them. 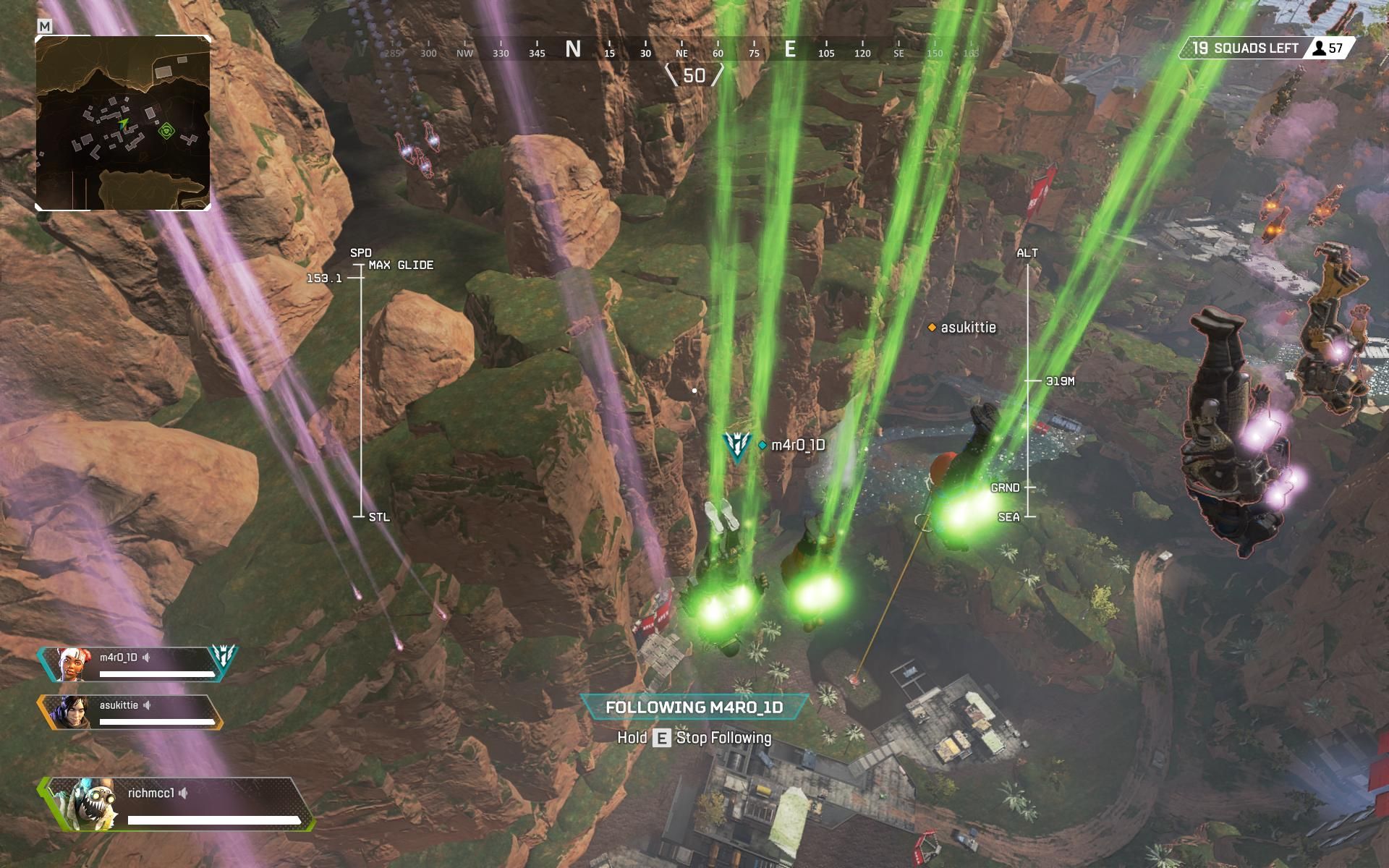 When that happened, or even just when I was able to outpace an enemy with Octane’s speed boost, I found it intoxicating. As a shooter, Apex Legends is twitchy and suitably tactical, but I find most of my joy in the game’s movement. Walls are quickly surmountable, ziplines let you cover large distances in a few seconds, and I’m yet to get bored of skidding my way down muddy slopes. But I’d still like Apex Legends to go further, to get closer to the freedom of movement offered in Respawn’s Titanfall 2, with wallruns and technical tumbles allowing for Tony Hawk-ish combos of smooth parkour moves. Octane’s introduction feels like a tentative double-jump in that direction.

There’s an apparent willingness to experiment in the game’s single new gun, too. The Havoc rifle, introduced earlier this month, is an energy weapon that handles like a handheld minigun. It’s a departure from most of its stablemates; where the game’s other real-world-ish analogues technically have alt-fire modes but can only flip between burst, auto, and single fire, the Havoc can be modulated to fire a charge beam instead of its usual hail of energy bullets. This alt-fire mode makes the Havoc Apex Legends’ only hitscan weapon, and theoretically good for mid-range conflicts where its recoil make its standard fire mode unreliable.

That said, I preferred using the Havoc as a close-range bludgeon, fitting the Turbocharger upgrade wherever possible to remove the gun’s spin-up time and scooting in close to focus down enemies before they could shoot back. These up-close battles can be quick and nasty, but there’s still something slightly woolly about Apex Legends’ gunfeel. I’m never quite sure whether the foe I’m shooting will drop with a few bullets or need the better part of two clips to keep down, their time-to-kill seeming to vary unpredictably. 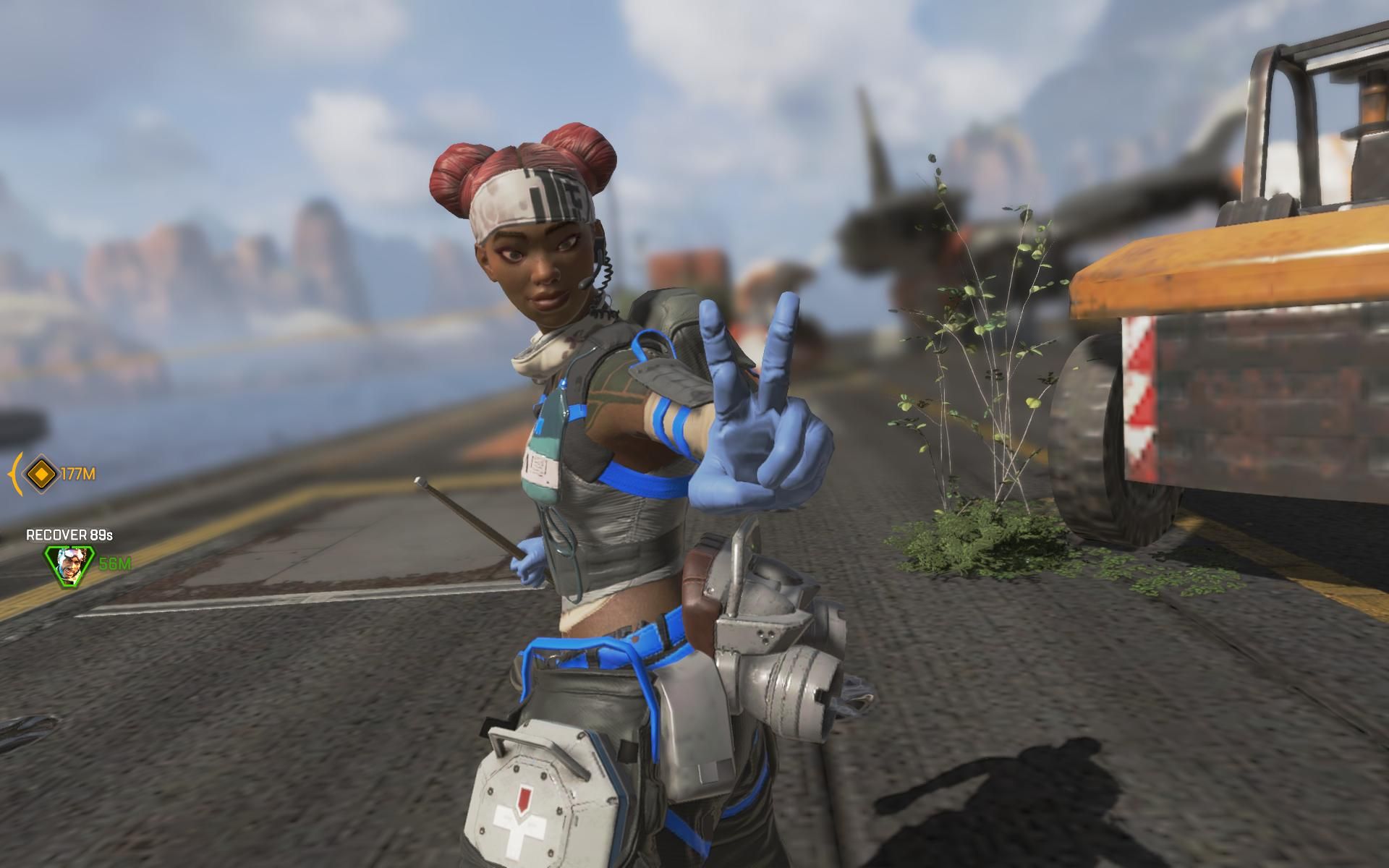 Some of that’s to do with time, because combatants have more time to strap themselves up with body armour as matches drag on, but I also wonder if the preponderance of real-world-ish rifles and sub-machine guns makes the shooting feel more pedestrian. These weapons have been definitively ranked by the community already (and addressed by balance updates accordingly), but I’m damned if I can remember which is which on my own. In response, I tend to keep a crib sheet open in another window when I play, just so I can remind myself of the differences between military-looking assault rifle A and military-looking assault rifle B on the hoof. I don’t necessarily need plasma cannons and black-hole generators, but in a world of ziplining robots and magic wraith women, the Havoc (and the much-maligned Mozambique pocket shotgun) feel like the only weird weapons.

This is a minor problem, though, and cosmetic items, when you unlock them, do go some way to differentiating the game’s arsenal. Most of these are drops from random loot boxes, here called “Apex Packs,” that are paid out after levelling up. The really snazzy skins tend to be locked behind real-world-money paywalls, but I was able to dress up the majority of the game’s guns with at least one skin after 10 hours of play, a process that felt fair enough. 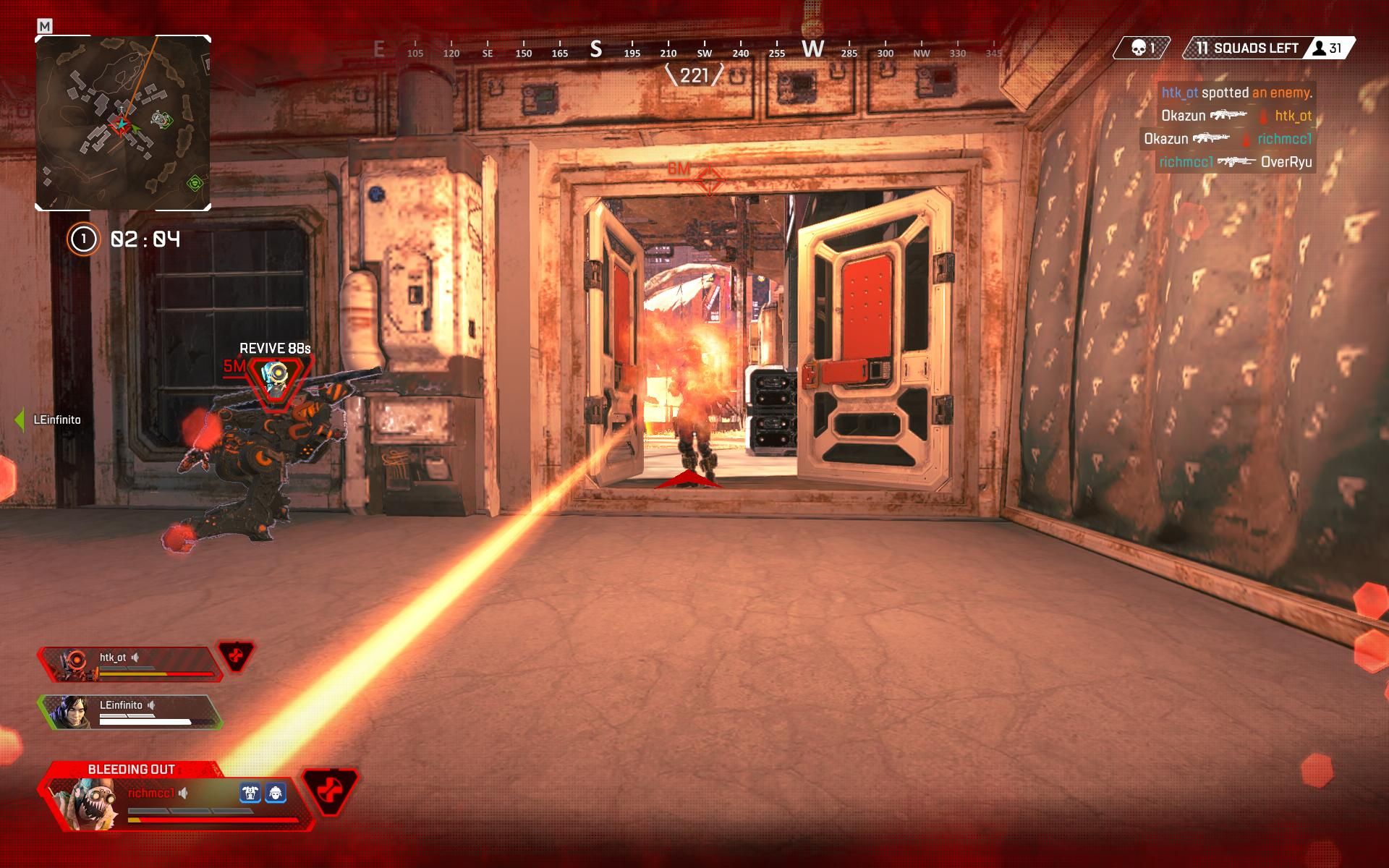 I also had a few issues with teammates dropping out early in the match, leaving me and any remaining squadmates at a significant disadvantage, but the speed at which new games can be found ameliorates this problem somewhat. A new "report player" option also allows you to enact some kind of justice against these turncoats, but the majority of my experiences with teammates were neutral, or even positive. This is largely thanks to Apex Legends' ping system, an incredibly neat bit of design that cuts down on the need for direct voice chat and helps melt away some of the frustration in online communication. My most negative interactions came thanks to the various nameplates, stat-trackers, and animations players can unlock for their chosen characters. Playing on a new account that displayed few kills and fewer special feats to my name, I received some audible and visible scepticism from teammates who assumed I was smurfing — a seasoned veteran coming back around with a low-ranked account to punk unsuspecting fools. (Fortunately, our play sessions soon dissuaded them of that idea.)

Apex Legends’ $10 “Battle Pass” increases the rate at which these cosmetics drop, unlocking additional rewards per rank-up. Your willingness to part with that cash will depend on how shiny you want your guns and how much respect you want from your teammates before the drop, but Respawn’s game does have a nice way of getting your money’s worth. Play enough during this first season and you’ll earn 1,000 in-game coins: enough to either buy Octane outright, or to put aside to buy in for the next season’s Battle Pass.

I’m not sure I need those drops, but I do know I’ll keep playing Apex Legends during that first season. It’s early, still, in the game’s lifespan, but with the introduction of weirder and wackier characters and weapons, Respawn have indicated that after putting out a solid (and free!) game, they’re going down positive paths. Slicker and quicker than PUBG, and more of a pure shooter than Fortnite, Apex Legends already feels fairer and more respectful of my time than the majority of its battle royale peers.