My people are fed, my homes are warm, my resources are abundant, and my generator is purring like a well-fed cat. For the first time in Frostpunk, things aren’t looking so bleak.

It’s a strange feeling. Typically by this point in 11-Bit Studios’ icebound strategy game, I’ve lost half my populace to sickness and the other half are so ravaged by frostbite that I can split a pack of socks between six families. But playing on the game’s new Endless Mode’s “Serenity” variant, I’ve finally got the time, space, and resources I never had before to build a city designed for more than just survival.

So we thrive, instead. Storms still roll in, but my insulated houses and network of well-stocked steam heaters make them little more than extra-snow snow days for my workers, who can just penguin-waddle their way to their jobs in cosy coal mines and thoroughly heated hospitals. Discontent flares up, as it’s likely to do in a post-apocalyptic icebox, but it’s smooshed back down again by easy access to fresh food and warmth. Things are going so well that I can even splurge on a few gardens: steam-fed public spaces that serve little purpose other than prettying up the place.

Serenity mode dials back the challenges inherent in the game’s regular campaign, providing increased resources and pre-researching vital technologies to give players a leg up, allowing them to focus on building the perfect city to survive the turbo-Arctic. It makes Frostpunk’s icy armageddon more of a backdrop than a breaking point, the thick carpet of snow lending the already Victorian proceedings a Christmassy air.

It’s also, after months of peace and prosperity, quite boring. 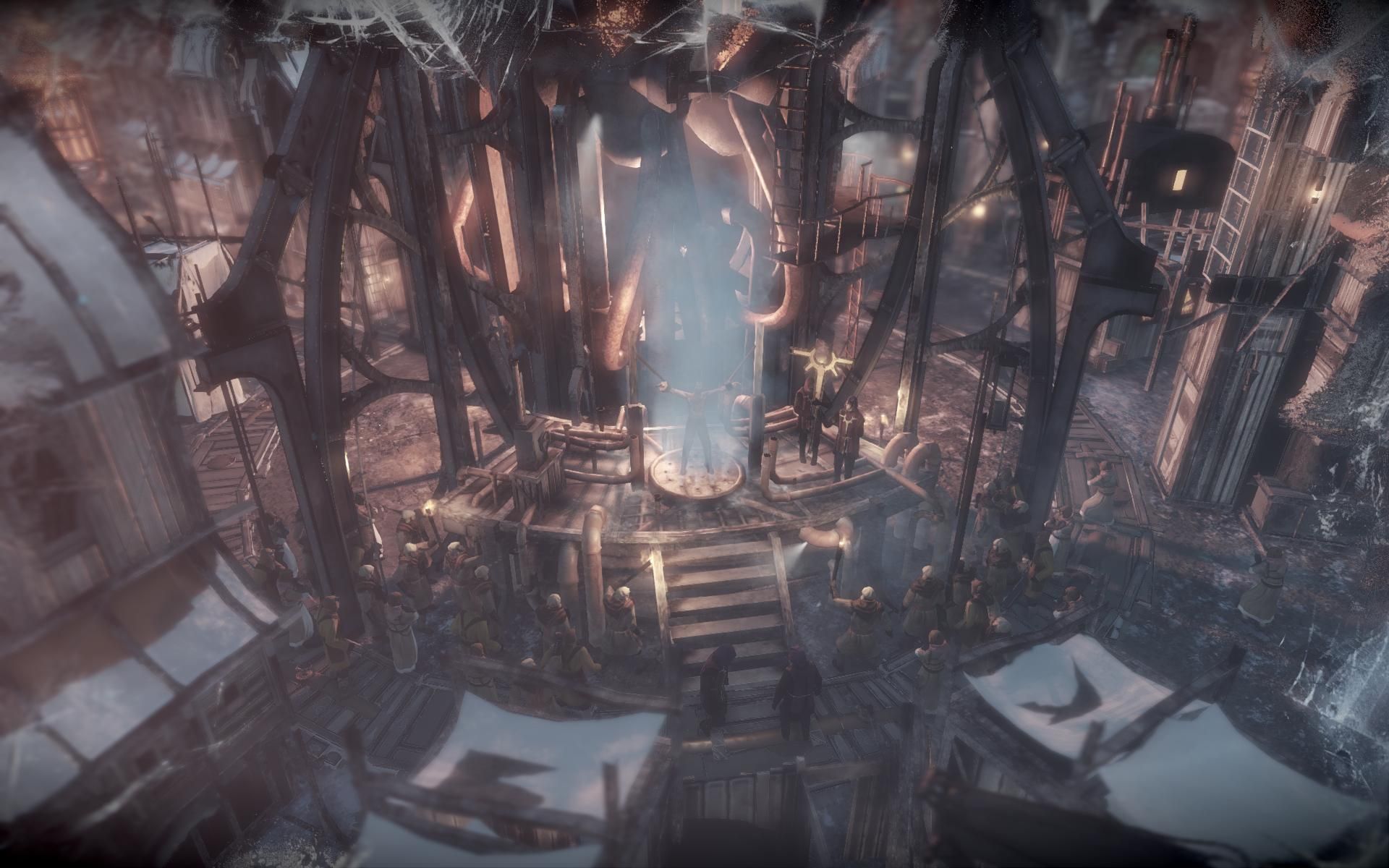 There’s only one thing for it: it’s time for me to declare myself a divine ruler and boil alive anyone who questions my rule, and write my name in unnecessary and expensive lights. The former is easy: it’s just a case of moving further down Frostpunk’s “Faith” tech tree, enacting law after law that codifies first the worship of a divine, before standing up and outing myself as the divine in question. Some people disagree with that assessment, but I’m the one who’s keeping them warm and fed in minus-90 conditions, and if they still fail to see sense, well — that’s what the steamy-pipey-execution thingy in my town square is for.

The latter is trickier. Serenity setting in Endless Mode is tagged as being “for constructors,” and that’s true, as long as you like your city creation more in the realm of civil engineering than creative landscaping. There are only a handful of decorative buildings, and those that were included in the update — streetlamps, public squares, and gardens — don’t stand out much against the intricate steampunk Victoriana of the game’s other structures.

I focused instead on symmetry. Where I’d once built for necessity, placing buildings for warmth — closest to the central generator — or for access to resources, I started building for aesthetics. I knocked down houses that had started as tents, letting people go homeless for a night as I put up new digs in concentric rings around my town, interspersing them with clinics and cookhouses at regular intervals. It didn’t make a jot of difference to productivity or survival, but it looked nicer, and every self-professed deity needs a hobby. That’s what they say about being a totalitarian dictator: you’ve got to make your own fun. 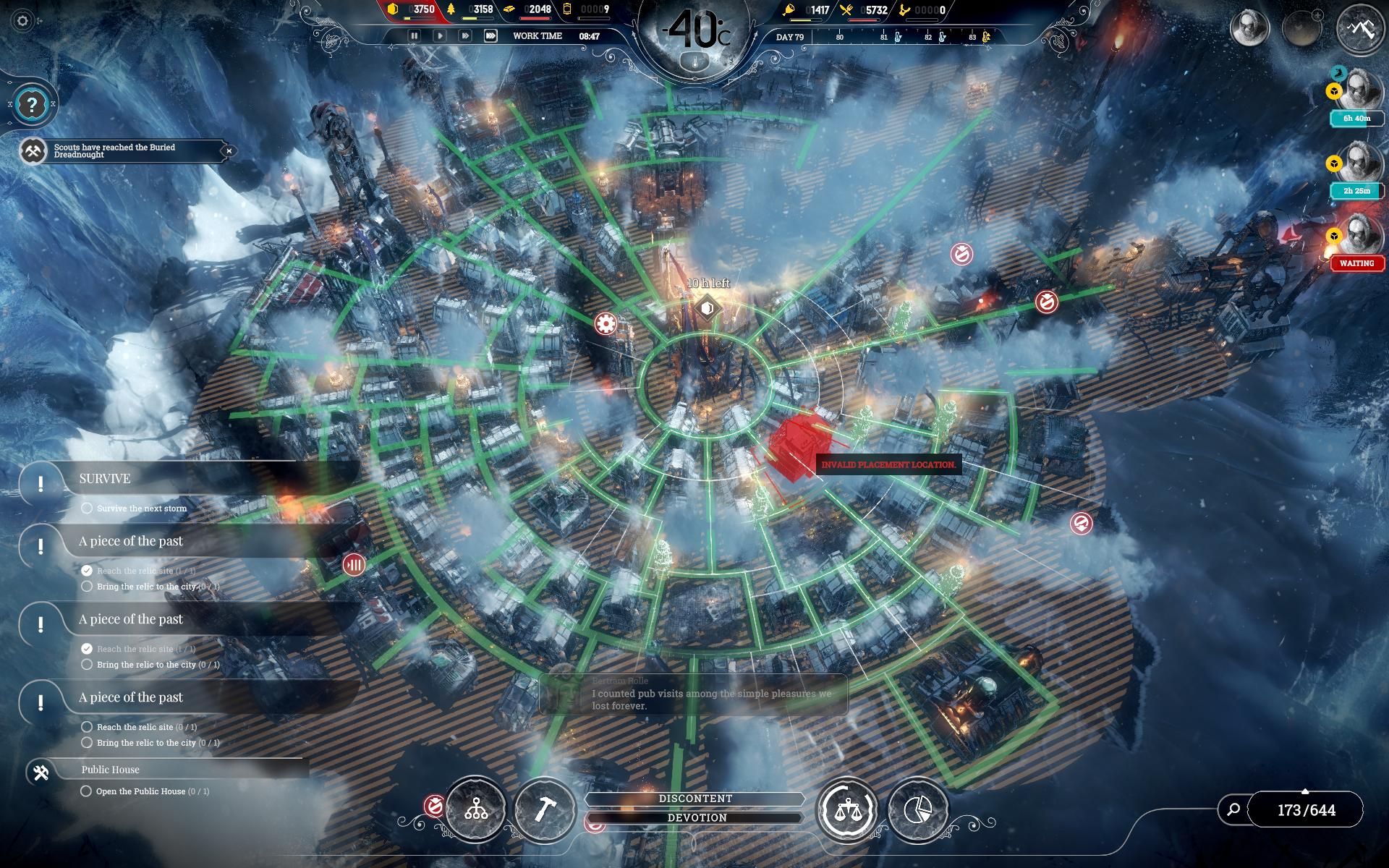 Outside of unnecessary construction projects, I spent my time sending scouts out to dig up old treasures. The Endless update also added Archives, a new building designed to house relics left over from the old world, before it got all colded up. I had find 15 of these in order to fill my Archives, and sent scouts hopping from empty cave, to ruined shelter, to supply cache, on the lookout for the rusted-out hulks of dreadnoughts in order to dig them out.

I say I “had to” find these; I don’t mean it. There’s no material prize for getting relics, bar a short passage of text and an image, hinting at an old steampunk world of automatons, balloon-piloting hunters, and temperatures that actually used the top end of the thermometer. By far the bigger prize out in the wastes are survivors. Warm bodies brought back will join the workforce and increase the size of your city, but even on Serenity setting, Endless Mode doesn’t allow for an infinite increase in populace: my population capped out at just under 700.

With that cap restricting any hope of building a new megacity, my interest waned in my icy slice of life as I closed in on the 100-day mark, and I made the decision to take what I’d learned to the other side of the Endless Mode update: Endurance mode. As it turned out, my life as an indolent fake deity hadn’t prepared me well for a harder and more grueling version of a game that already had a reputation for both difficulty and gruel. 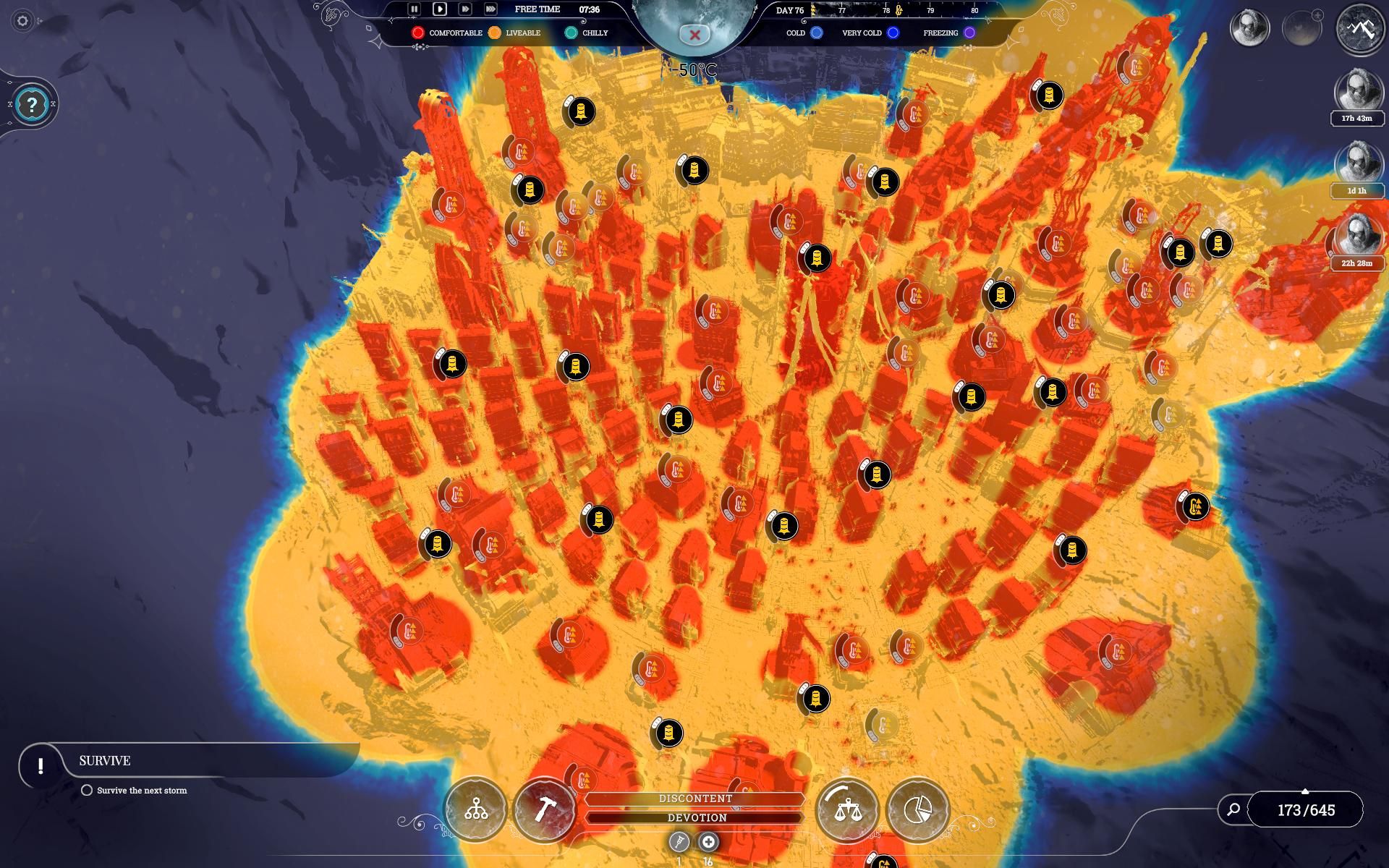 100 days? I was lucky to reach 10, the mode’s lack of resources, colder weather, and nastier storms ensuring that any stockpiles I was able to put together were raided faster than I could dig out new materials. I was banished into the wastes to die as a failure, and as my avatar trudged away, I blamed a few foibles with Frostpunk in 2019: the fact that important buildings can look a little too similar in the winter wasteland, and that major drains on your resources can be a little tricky to diagnose from a distance without a lot of clicking.

But most of all I blamed myself. Endurance mode feels like Frostpunk at its hardest: the same threats as the toughest portions of the original campaign, with no end in sight. Surviving, let alone thriving, in this mode felt to me as unfair as instant global cooling would actually be. But despite that difficulty, it felt like there was a potential path through the end of the world, if I’d built exactly the right things at exactly the right time in exactly the right order, then maybe — if I’d also demanded double shifts and put children to work in the coal mines — I could’ve kept my people alive. 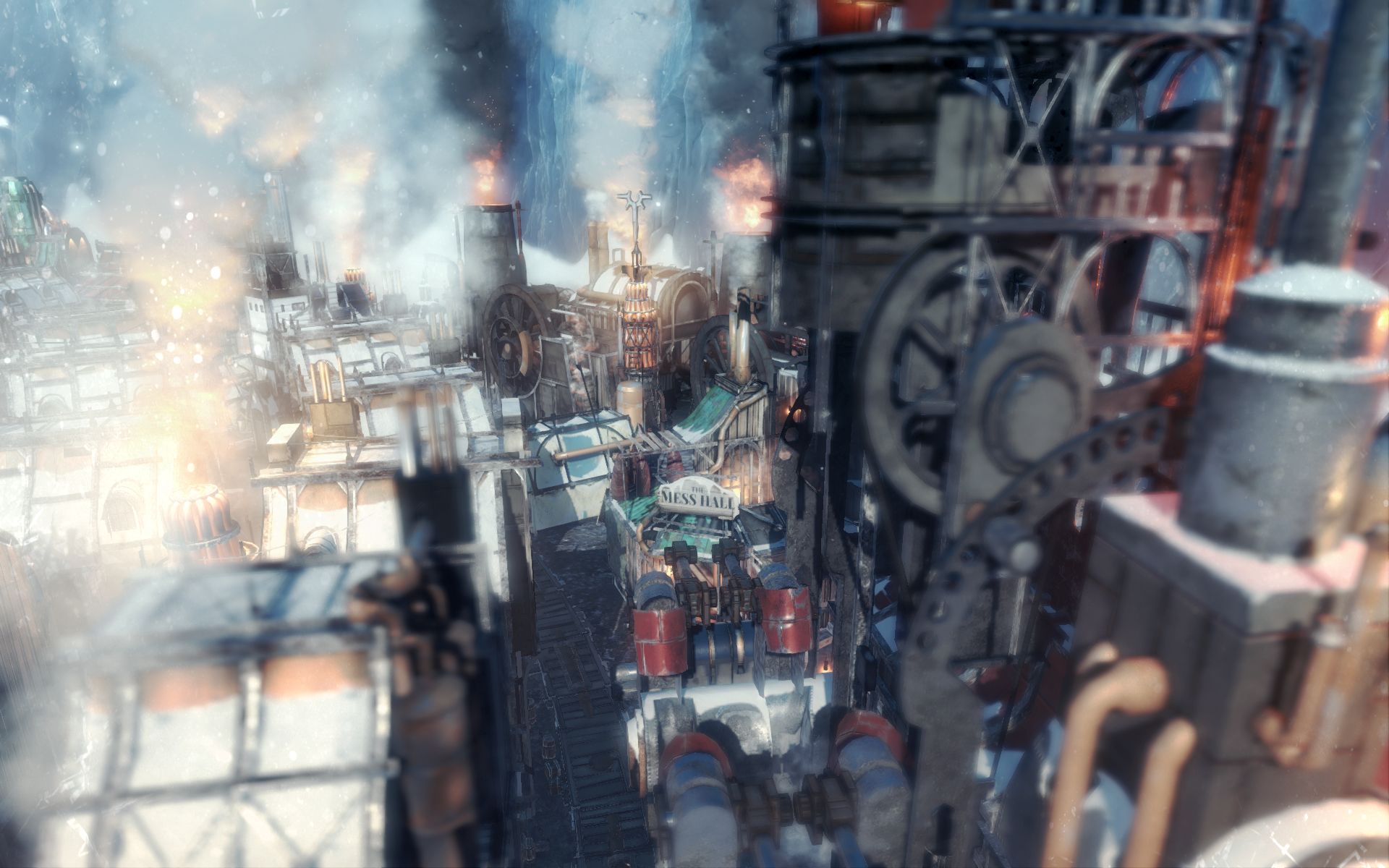 I’m not that ruler. In games I’m happier being worshipped by, than working for, the masses, and balancing the demands of Frostpunk’s campaigns already pushed my management limits. Even back at launch, that mode did something very difficult in strategy gaming: it made you care about every resource. Do I spend wood on roads, or research? Do I burn it now for immediate charcoal, or keep it in stores for tougher times ahead? Do I really need steel now, or can it wait? Multiple decisions about multiple resources with multiple variables keep most of Frostpunk’s modes teetering on a knife edge, and the release of Endless Mode only highlights the improvements that 11-Bit have made since the game’s launch last April. Patches and hotfixes make the cold world more liveable, and neat additions like a photo mode have made it more inviting. Endurance and Serenity modes are the game’s extremes, but at its warm heart, 11-Bit’s game has only gotten better with updates.