Ganesha, the elephant-headed god of the Hindu faith, is legendarily generous, wise, and optimistic. He’s a patron of the arts and sciences, and busies himself by working to remove obstacles in the path of honest and caring people.

It’s not really on then, I’d say, to call him a “fucking idiot.”

That’s just what my teammates in deity-themed MOBA Smite kept doing, though. Maybe they had it in for the kind, gentle, and benevolent god? Maybe that was why they spent half an hour just absolutely roasting him? Or maybe it was my fault. You see, this was my first time playing Smite as fairly recent addition Ganesha, and I didn’t really get how he worked. I died. I died a lot.

I’d started the match by dying to Thanatos. It was appropriate — Thanatos is the Greek personification of death, after all — but my teammates apparently weren’t ones for dramatic irony. What they were ones for, and what Smite’s community seems to revel in, was the dishing out of constant abuse. It’s not just Ganesha (or just me) that they’re unhappy with, either. Smite might look different to its MOBA peers, with an over-the-shoulder third-person camera that makes it seem more like a shooter than a Dota clone, but it’s inherited the same community problems evident in League of Legends and friends. Even playing on the South East Asian servers, where English isn’t necessarily the default language, matches regularly devolved into full-on “fuck”-fests: slanging matches between team-mates who blamed each other for everything wrong in the match, the game, and the world. 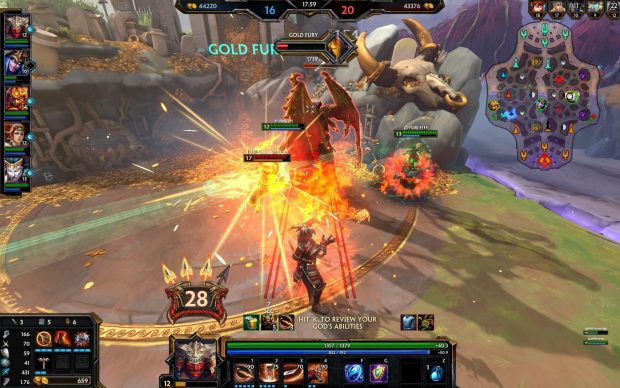 Smite has multiple modes, but its five-on-five Conquest mode is its most traditional MOBA-ish variant, and remains the easiest selection to secure a quick match. As is to be expected, the mode uses the same map every game, but the three-lane arena has been widened and rejigged for a fresh year of competition. Its jungle, in particular, feels more dense and dangerous from an over-the-shoulder view than it does from the genre's traditional top-down camera angle, the tight vision cone meaning gankery can come from any corner.

As Ganesha, I was the victim to many of those ganks. I had more success with Hachiman — the Japanese god of war and archery. Where Ganesha needed to support his peers, to ward and rescue and flit around the map propping up his allies, Hachiman has a much simpler role: shoot the enemies. Kitted out with a bow, a snazzy war mask, and a horse he seems to keep in his pocket, Hachiman’s a fairly pure damage dealer, able to lay down a blanket of fire in his lane before melting weaker foes with a hail of flaming arrows. That’s if you can keep him alive, though: he’s just a man in a battle between ice trolls, mega-turtles, and thunder lords, and is subsequently squishy in team fights. Learning how to stay at the back of battles is key, as well as knowing when to tower dive, to commit to a kill, and how to escape if everything goes wrong. 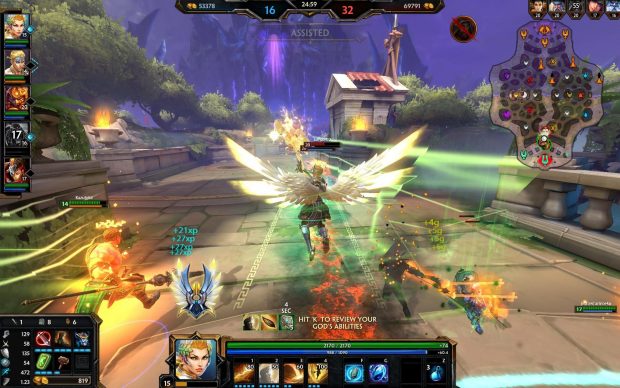 There’s is some more serious deviation here from other MOBAs, however. There’s less emphasis on last-hitting in order to get gold and experience: players get smaller payouts of both even if they just stand near AI creeps as they whack each other to death. This more streamlined system, plus the removal of DotA’s denial mechanic, hint at Smite’s status as a cross-platform game that finds its home on Xbox and PlayStation as well. This change, as well as an auto-buy system that lets you customise your planned item purchases before a game, makes Smite sound like a less fiddly option for people who want a DotA-like but whose APM won't light up their keyboards.

Smite is resolutely not a simpler entryway into a complicated genre. Every god typically has at least one skill that requires careful aim: the kinds of skillshots that are rarer in competitors like League of Legends and Dota 2. Of the gods’ four active skills, the first two typically dish out damage, either in an arc or a straight line, while their third functions as a dash, used either to initiate fights or escape from them. This setup is evident in Ganesha — who was only added to the game last April — as well as fellow new deities like Cerberus, Artio, and Discordia. Some of the newer gods stray a little further from this template, though. Cernunnos, also added last year, is slightly different in that rather than acting as a straight-line projectile, his first skill changes the properties of his basic shuriken attack, imbuing the throwing star with extra damage, debuffs, lifesteal, or a slowing effect, depending on the season he’s selected. It’s a system that allows for some lovely combos, but shows how complex Smite’s teamfights can be, forcing Cernunnos players to cycle through and track four different attack options while juggling three other skills, their own mana and health bars, as well as keeping tabs on the actions of up to nine other players.

Hi-Rez has kept up a steady pace with their release of new gods, churning out new additions to the heavens every month or so since the game’s full launch. While Smite is free-to-play, its gods aren’t — at least, not for brand new players. A one-off payment of £20 will unlock all 93, but for people who don’t want to spend a penny, gods can also be made available with “Favor”: an in-game currency earned by playing matches. Most gods clock in at 5,500 favor if you want to buy them outright. That’s barring the newest release (Cerberus at the time of writing), which will set you back 11,000. 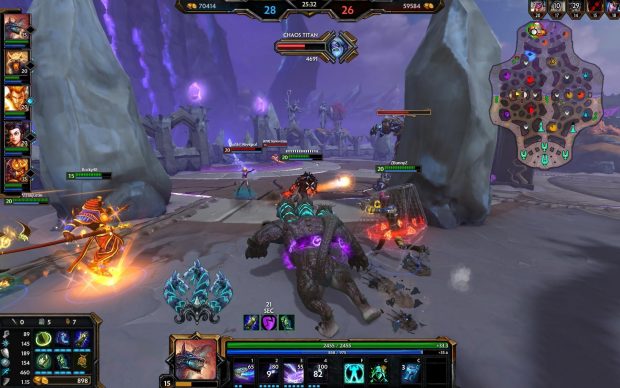 It’s not quick to earn the favor you’ll need to get a new god — especially if you want heaven’s new hotness — but it’s not noticeably egregious, either. I got enough for greedy Norse dwarf Fafnir after a week of evening play, with quests, level gains, and match wins contributing to my total. Fafnir's got some interesting skills

In other ways, sadly, it's very much a typical MOBA. Part of this is a function of the genre itself. MOBAs are so dependent on the majority of your teammates operating like a gestalt entity: the best players look like they’re in their teammates’ heads; the worst players can seem like they’re actively sabotaging their actions, and the reaction to anything other than robotic perfection is often abuse. But Smite’s game flow in particular seems to compound this problem. Hi-Rez’s game emphasises god-on-god team fights, with a short laning phase in comparison with Dota 2 and League of Legends. Players who don’t get in on these fights early, and — crucially — win them can be left way behind in terms of levels. This leads to an abundance of steamroller victories: where the team that fell behind early has no hope of clawing their way back to a potential victory.

And those steamroller defeats in turn feed the cycle of abuse. Longtime players could just demand that neophytes suck it up and get good, but four years after Smite's release, there's still not much space for new players to actually do that — to get their head around these skills if they haven't already committed significant time to a MOBA before. A basic tutorial explains the concepts of the game, but more advanced concepts like last hitting, jungling, and warding are only sketched in vague strokes. In Conquest and Joust modes, players are expected to be up-to-speed with these stock ideas, as well as understand the complex relationships between Smite's 90-plus gods, despite having no safe space to practice their skills. Even with a thousand hours of other MOBA-ing under my belt, it felt like an (appropriately) Herculean task. For brand new players, it could be positively hellish.