I’ve got a robot chicken in the shed that parps out batteries. Do you want to have a look? No, seriously, she’s next to the electrical sheep, and she’s a proper money maker. Every day I teleport down to my little farm, collect all the wheat and cotton and kiwi fruits that have grown overnight, and fill my pockets with double-As.

The penguins at the spaceport pay loads for batteries, you see. They love electrical wool, too, but it’s the metal chicken that’s allowed me to give my bipedal mech a better drill arm, as well as giving me the funds to buy a few bars of tungsten and add another wing to my starship. A wing that I’m planning to fill with chickens, of course.

At launch, Starbound offered a huge web of possibilities, from humble farming to exploring the galaxy. In the two years since the 2D craft-’em-up’s official release - and a full five years after it first hit early access — developer Chucklefish has only added more, putting out three significant updates that have introduced beefy new features like the chance to terraform planets, to upgrade weapons, and — crucially — to go fishing.

The sheer amount of stuff you can do is staggering. It’s overwhelming at first, too. 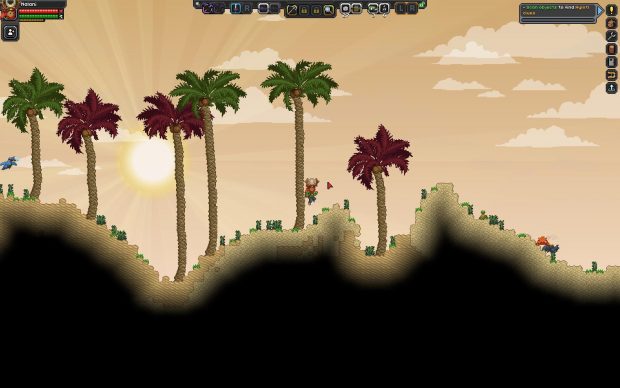 In other craft-heavy games, I tend to set a specific item as a target, and build toward it, saving cash and hoarding materials in order to get there. I tried that with Starbound, but my plans to overhaul my starter mech and launch my own space station (both features introduced in the most recent 1.3 update) felt impossibly far off. I didn’t have the money I’d need to buy the requisite deeds, so I needed to build up a basic farm to kickstart some cash flow. I didn’t have the ore I’d need for parts, either, so I’d have to go spelunking to dig out copper, iron, tungsten, and the rest. I didn’t even have the fuel I needed to get myself out of the star system and into one with a wider array of metals for the taking, forcing me to hop around on airless moons, picking up gooey FTL fuel while being chased by a beak-mouthed space ghost.

This space ghost is a unique opponent, but most of Starbound’s worlds are infested with monsters. Some of these will wander, flap, or burble by without incident, but the majority of these critters will go straight for the player, their fangs, claws, or tentacles bared. Their erratic combat patterns can make exploration frustrating: combing a new world, it’s never quite clear whether that blue bird dog thing or that ball of flying fluff is going to object to your presence, and if so, how much of your health bar they’re going to chunk off with one attack.

Being forced to act as intergalactic game warden was by far my least favourite part of Starbound, and I kept finding ways to avoid combat. On desert worlds, I'd end up leading a trail of ornery wildlife, while on ocean worlds, I started swimming under islands just to avoid the menagerie of creatures that waited above, even though the slow pace of underwater made my journey twice as long as it should’ve been. 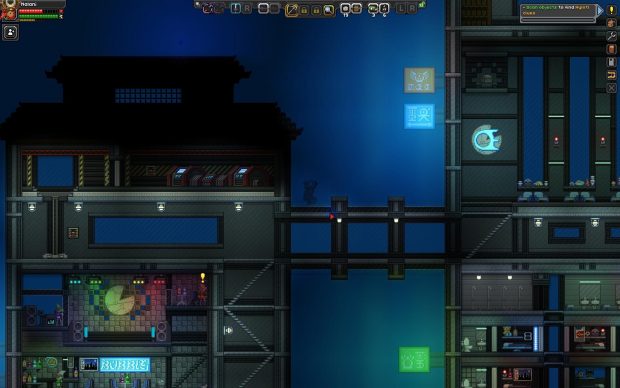 There’s a wide range of close-range weapons — from daggers, to broadswords, to two-handed hammers — but I found them all a bit finickity to use, especially when a lot of enemies close the distance between you with frightening speed. I had more luck with ranged weapons: Starbound’s pistols, rifles, and bows. I defaulted to using a legendary poison bow for much of my time in its pixellated galaxy, both for the fun in judging the arrow’s arc, and for the fact I could fire and forget, letting the green goop whittle down enemy health bars.

Space combat, introduced as part of the 1.3 update, is generally more enjoyable. Players can choose to investigate anomalies while flitting through solar systems, dumping their customisable mech out into zero-gravity and dodging Space Invader-y aliens and swarms of living rock blobs. At their most intense, these sessions make Starbound like a quasi-bullet hell shooter, both more manic and more predictable than its standard ground-based combat. The weapons are snazzier too, a combination of laser cannons, power drills, and mecha swords, meaning that I would seek out space-based fights way more often than other kinds of combat.

If you want to progress the story though, you’ll have to fight on the land: some of the better items and upgrades are tied to your quest progress. Starbound’s fiction is complex and incoherent, full of warlike plant people, wisecracking penguin mechanics, and bears who run shops, but its story is simple — Earth has been attacked by a load of tentacles. Its story missions are even simpler, tasking the player with scanning specific items on various flavours of planet (desert, ocean, etc.), before delving into ready-made caverns and beating a boss. 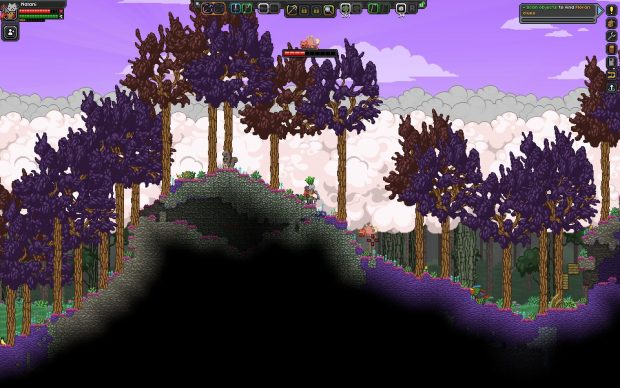 Fortunately, there’s no real time pressure to actually save the Earth. It’s absolutely fine to sack off our homeworld and spend your life as an intergalactic trader, or devote yourself to building the perfect four-bed detached house out of skulls, or — my choice — start a new life as a literal battery farmer. There are so many items, so many ways to get ahead, so many avenues to pursue, and so many ways to play that minor frustrations can usually be forgotten.

Where Chucklefish hasn’t added more stuff, it’s smoothed off some of Starbound’s spikier edges. The act of traveling between worlds and stars is simplified: navigation is now done by clicking on 2D map, sending your ship to planets, moons, anomalies, and even other ships in “real” time. With the upgrade system, your favourite weapons can stay with you for longer, and with terraforming, your favourite planets can be made even better. The result is that there’s now so much to do in Starbound that new players will likely find themselves paralysed by choice, but there’s no need to cover all the bases. Instead, pick one general thing: set yourself a quest to start an intergalactic colony or kill a penguin crime boss. Allow yourself to be distracted along the way, and see how many hours later you come up for air.

Or you can just choose to do nothing. Make the call to just pootle around in space and on the surfaces of new worlds and the game’s perfectly happy to accommodate that decision, even on survival mode, its delightful presentation and cute touches making the procedurally generated worlds feel lived in and loved. There’s a cargo freighter’s worth of stuff in Starbound, but it’s all to be enjoyed — or ignored — at your leisure, making a return visit recommended.