Hi! I’m an incredibly charismatic space otter, and I love you! Not just you! I love everyone, be they otter analogues, bird people, or particularly advanced fungal infections! I even love murderous robots, which I’m aware is not a great idea because they’re murderous robots!

At least that’s what Stellaris’ Scyldari would say, if they could do anything apart from bat their ears adorably on the game’s menu screens. Paradox’s Stellaris is freeform grand strategy, in the mould of the developer’s other games Europa Universalis and Crusader Kings, and as such is much more about numbers and menus than cut-scenes or narrative arcs.

But that doesn’t mean it’s hard to get into character as one of its wildly different races. As the pacifist Scyldari I opened my stubby little otter arms to the galaxy, inviting sentient people, plants, and parrots into my multicultural paradise. When I found new friends, I treated them as potential equals, opening my borders to refugees, economic migrants, and even increasingly sentient machine intelligences. When I found uncivilised types, still scrabbling around the galactic dirt, I uplifted them, bringing them into my pacifist union. 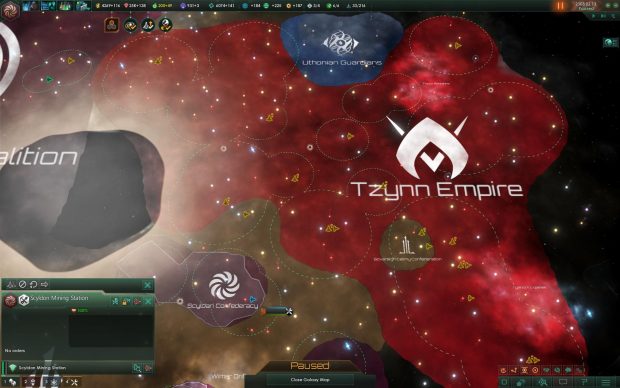 My Scyldari galaxy-view should’ve been at odds with the warlike Tzynn Empire — a band of four-eyed reptilians I spawned right next to — but I found that my Scyldari were just so goddamn agreeable that the Tzynn left them alone. Actually, they didn’t just leave them alone: despite having the “Fanatic Militarist” trait, and despite being inveterate slavers, the Tzynn started to look on their fuzzy friends as a people needing protection, and asked me to join defensive pacts.

I didn’t get the same courtesy when I started another playthrough as the fungoid Blorg Commonality. Like the Scyldari, the Blorg are obsessive xenophiles, so desperate to cosy up to every other race in the galaxy that they have their own theme song. Unlike the cutesy Scyldari, though, the Blorg are horrific to look at — a mass of tentacles and gloopy bits that make most races poop their space pants and run away screaming from the diplomacy table. That manifests itself in the “Repugnant” trait, which decreases other civilisations’ opinions of the Blorg, and usually forces them to make their friends through force.

In addition to racial traits, Stellaris’ species will also gravitate towards a specific political ethos, defining further how best to find your place in the galaxy. My Scyldari were materialists (just like all otters), and thus got bonuses to research and decreases to the upkeep of robot workers. On the other hand, their desire for new stuff meant that they couldn’t outlaw artificial intelligences, leading to some potential problems in the future when our own self-built robots might start to question the meatbags’ rule. On the inverse, a spiritualist-leaning populace is less likely to cause political unrest, but also can’t ever give robots full citizen rights, believing them to be unequal in the eyes of their chosen deities.

You’re not stuck to the premade species: Stellaris lets you build your own, handpicking traits both good and bad, and defining your preferred political system. Its governors, scientists, generals and admirals all have their own names, traits, and abilities, too, picked up over years of active service. But even though my prime minister was a substance abusing space otter, he never felt quite as animated as one of Crusader Kings II’s little lords, a mild drug habit less interesting than the kind of depressed leprous schemers Paradox’s other game dreams up. 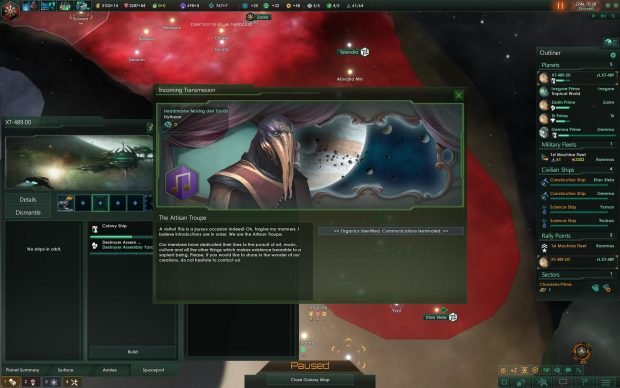 The developer has made a number of tweaks to this political structure since Stellaris’ launch in early 2016 that make it easier to understand for new and longtime players alike. Small changes — like reframing the dichotomy between individualist and collectivist ethoses as one between egalitarianism and authoritarianism — are simple rewordings. But they’ve also been happy to rip out and replace systems wholesale that weren’t working so well, adding a new tradition system that lets you specialise in areas like expansion, diplomacy, or material production when your colonies generate enough unity. The vanilla game’s embassies are also gone, replaced with a new measure of “Trust.” Shown on the diplomacy screen, Trust is earned by locking into pacts and alliances with other species, and affects their general opinion of your own race, allowing you to turn the tide of opinion over time.

These systems allow for meaningful — if slow — change in the way you govern your populace. If I had wanted to, I could have turned my otter-faced Scyldari into hardcore militarists over time by throwing my support behind specific political factions that had turned against their furry brethren and started advocating for space genocide. As it was, I wanted to keep my lil' buddies blood-free, but I did have pause for thought when one of my scientists discovered religious texts linking the Scyldari to ancient prophecy.

I could’ve used that discovery — dug up as part of an anomaly research chain the game generated — to immediately push my people toward a spiritualist existence. But with a materialist populace, and a multicultural society drawn from all corners of my galaxy, I decided against following an otter-first religion that might’ve ended up subjugating those not blessed with fluffy-wuffy ears and the cutest little button paws you ever did see.

That decision came as just one of many interesting choices Stellaris asked me to make as I ventured out into the stars. The tweaks Paradox have made to Stellaris ensured that the first few generations of every game I played were full of discovery and choice, asking me to choose whether to investigate anomalies and risk my scientists, to select rulers that would define how I built my planets, and to make first contact with the aliens I shared my spacetime with. 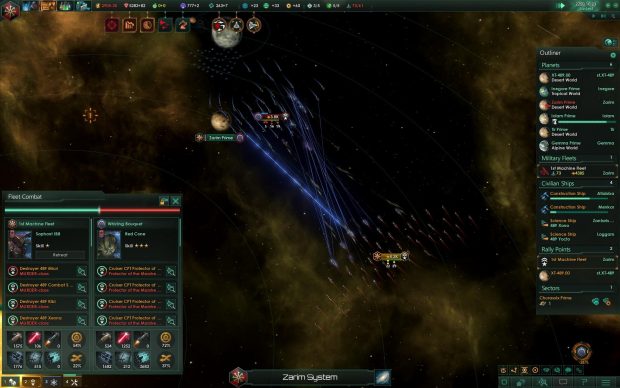 The problem comes once those decisions have been made, and once you’ve fumbled your way out into the wider galaxy. The anomalies and relics of the early game have all been discovered, habitable planets all colonised, and borders largely set — in some cases generations before. As my pacifist Scyldari, mid-table in terms of fleet and technological power, all that was left to do was sit back and offer gifts to my neighbours until they decided they liked me enough to form a Star Trek-esque Federation.

Added in a patch after launch, the Federation win condition — in which your Federation needs to own 60 percent of all colonisable planets) — is as close as Stellaris gets to a codified peaceful victory. The other solutions involve direct domination, beating other empires back and either invading or demanding their planets as the spoils of war.

I elected not to mobilise the Scyldari war machine once my surrounding space had been fully colonised, and not just because it would be as feeble as my species’ front paws. In the late game, wars are grinding, attritional affairs that can involve chasing fleet stacks back and forth between planetary systems. Finally blast your way through an enemy fleet and you’ll add points to your “war score” — a measure of how likely your opponent will be to capitulate to your demands — but you’ll still need to chip away at enemies a few planets at a time unless you can totally overwhelm them militarily. 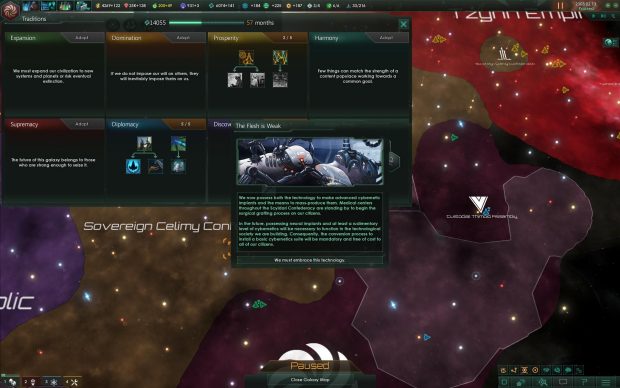 Stellaris does at least make one key concession to the late-game sprawl common in these kind of grand strategy epics. Players can designate specific sectors inside their controlled space, passing autonomy (or at least some control) over to an AI governor. This took a swathe of planets off my plate and gave me the mental space to manage those I did want to look after, but I consistently saw some major deficiencies in the computer’s control, leaving buildings un-upgraded and mining stations unbuilt despite a surplus of raw materials.

Its three major DLC packs add more to the endgame, too. The Leviathans story pack adds enclaves of traders, curators, and artisans that players can barter with, as well as huge spacefaring beasties that guard potentially powerful treasure. The second pack — Utopia — did even more, adding megastructures like the star-spanning Dyson Sphere that can serve as an internalised final goal for peaceful (or warlike, if you fancy) civilisations.

The most recent pack, Synthetic Dawn, focuses more on changing how you’ll play your entire campaign. It adds machine intelligences, throwing in robots that run the gamut from friendly caretakers, all the way to genocidal deathbots hell-bent on destroying all organic life. I took one of these murderdroids for a spin, ending up in the middle arm of a spiral galaxy sandwiched between theocratic pacifists and weakling materialists that lacked the cuteness of my Scyldari.

Neither lasted long against my killmachines. Diplomacy’s not even an option for the most dangerous of the robot empires unless they’re talking to fellow artificial intelligences, making for a playthrough that has to focus on fleet creation and organic subjugation. In this form, Stellaris is a min-maxer’s dream, with a ship creation system that let me fix specific weapons, engines, and other components into my ships in order to wage the most perfect war. But without a real-world machine brain, this processional destruction began to feel tiring, and by the time old “Awakened” empires arose in the galaxy to battle each other with superpowered weapons, I was ready to tap out anyway.

The Scyldari’s pacifist life, too, didn’t work out forever. I was happy, my people were happy. But happiness breeds boredom, and sadly in its vanilla form, Stellaris’ endgame remains too staid, too sprawling, and too boring. Its three DLC packs do more to keep it interesting further into the galaxy’s future — so much so that the $20 Utopia, in particular, feels essential — but most games still end not with a bang, but with an otter’s whimper. On the way up, though, it’s a surprisingly thrilling ride: a game that lets players lean hard on their uniqueness to define their space in space.