The tanks of World of Tanks are an evolutionary success story. Not only did they manage to build a functional society on their planet despite the lack of opposable thumbs — or appendages in general — but out in the reaches of space, far from Earth, they were also able to split their organised conflicts up into two forms: the bigger battles represented by the original World of Tanks, and smaller seven-on-seven conflicts seen in the simplified and mobile-friendly World of Tanks: Blitz.

They were also able to develop their own advanced economy. In fact, it seems like the only thing the inhabitants of the World of Tanks value more than organised conflicts to the death between teams of multiple tanks is cold, hard currency. World of Tanks: Blitz is absolutely rammed with the stuff: gold, for buying new tanks; credits, for outfitting those tanks with ammunition and repair items; experience, for giving tanks nicer guns or better engines, and spare parts, for sticking those new weapons onto the tanks in question.

Such a range of currency may be self-explanatory for the tanks themselves, as well as anyone else who has spent significant time on the surface of the World of Tanks, but it can be overwhelming for new visitors to the arcade-ier Blitz. The game opens with a breezy tutorial that rips players through how the various currencies are earned, bought, and deployed. Sadly, it’s far from exhaustive, and could leave new players confused about how best to use the experience points earned by controlling the tank planet’s denizens. 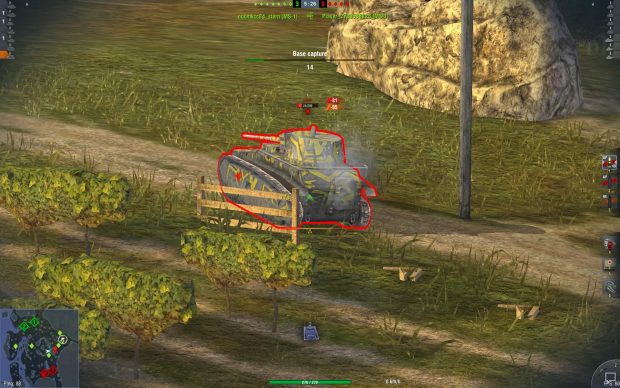 That’s unfortunate, as these experience points are the most valuable of Blitz’s currencies. New players start with just one tank in their garage: an old, slow creature that’s assigned to tier one of Blitz’s 10-tier system. Playing through the tutorial ensures you’ll get to play with a tier two tank from one of the five countries represented — the USSR, Germany, Britain, the US, and Japan — but from there you’re on your own.

And it’s a long road ahead. Blitz is altogether a simpler, lighter affair than its more simulatory forefather, betraying its background as a mobile variant of the original World of Tanks, designed to make tanky combat playable on iOS and Android as well as PC. But the same can’t be said of its progression system, which — appropriately, for a game about tanks — demands a slow, trundling grind to earn new vehicles. New players will quickly reach tiers two, three, and four, but to unlock a tier five tank requires a serious time commitment. A tier six tank is double that, and tiers seven onwards are several tens of hours of match time.

Paying real money speeds this process up, but not by much. I coughed up gold (purchased with real-world money) for a premium account, increasing my experience and credit gains by a factor of one-and-a-half after each battle. The step-up is fairly cheap at just over £5 a month at current gold-for-cash exchange rates, but it also feels increasingly necessary as players step into higher tiers.

Without the boost, a victory for my team paid out around 350 experience, jumping up to 500 if I had a particularly successful round, taking out several enemy tanks and surviving until the end of the conflict. The tier five tank I had my eye on cost around 15,000 experience, meaning that once I’d already sunk about five hours into one of the game’s tank trees, I would need 30-odd incredibly successful battles under my belt in order to make it to the next step. A tier six tank asked for double that, and that didn’t even include the multiple upgrades I would need to buy with experience before I could even earn the right to buy the next step up. 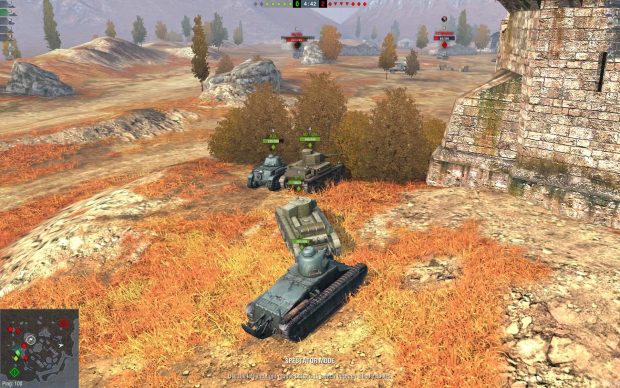 There’s a way to bypass this grind, but it doesn’t come cheap. Like its bigger sibling, Blitz offers premium tanks for gold — the currency obtained by exchanging actual cash. Wargaming says that as in the original World of Tanks, these premium vehicles aren’t better than their similarly tiered peers, but they’re only kind of right. They come fully kitted-out at purchase, for one, saving the time it would normally take to unlock their various turrets, guns, engines, and other components, as well as the cost of mounting them to the frame. Playing with premium tanks also provides more experience and credits for their drivers, making them a theoretically sound investment if you want to grind the currency required for the next big metal beast on your shopping list.

Several of them are premium in price, too, running from around 1,200 gold at lower tiers (around £5) to a stonking £29 for the tier six Churchill Mk. VI. This would feel egregious for a single tank even if Blitz didn’t have the original World of Tanks hanging over its shoulder, but it feels that if you simply have to drop 30 quid on a digital facsimile of an angry house, best to do it in the game with fancier graphics and a more detailed combat system.

These kind of prices don’t help accusations against developer Wargaming of a pay-to-win approach, both in offering premium tanks, and in allowing players to spend real cash to increase the quality of their crew or the lethality of their tank. Blitz copies most of these lessons from its predecessor, but has been quicker to make some necessary changes. Foremost amongst these were tweaks to “gold” ammunition, made in March last year, which ensured that premium shells no longer gave an empirical edge to players that chose to use it. Available for both real-world money or in-game credits, the use of these shells was one of the community’s biggest bugbears, but Blitz’s move — to make them alternative options, rather than just straight-up better than the default — seems a good one. 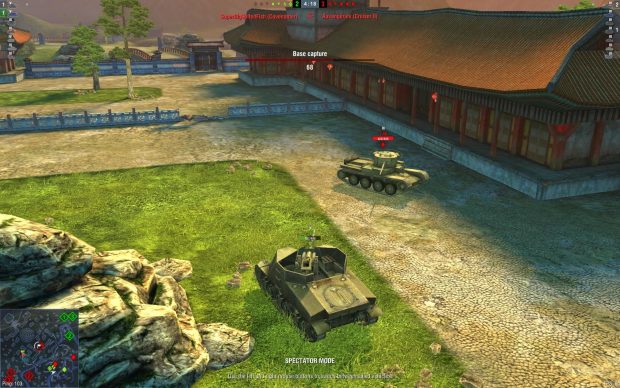 Blitz’s core game is not without its charms in comparison to its bigger sibling, either. It’s still couched in reams of complex menus, tech trees, and store pages, but the combat itself is snappier than in standard World of Tanks, making matches feel quicker. Where World of Tanks’ suite of tank destroyers and artillery pieces can engender a camp-first playstyle, Blitz’s focus on small, medium, and heavy battle tanks usually ensures that the two teams find each other in the middle of the map and leave it riddled with smoking metal hulks just a few minutes into a match. Smaller team numbers — seven-on-seven, rather than 15-on-15 or even 30-on-30 — also help this process.

Those snappy fights are no less strategic, either. Tank battles aren’t going to be as twitchy or frantic as an Overwatch match, for example, but there’s tension in peeking around a corner, panic in committing to a charge against a slow-moving tank destroyer, only to realise it has backup in the form of a speedy light tank friend, or babysitting support from a nearby heavy. With tank reloads taking upwards of five seconds in most cases, even pressing the fire button becomes a fraught decision, as missed or deflected shots leave you open to counter-attack.

But the way Blitz’s progression system works, those sensations dull quickly. In order to unlock new tanks, Blitz requires players to set their tracks and keep trundling forward, grinding out match after match on the same handful of maps in order to even think about changing their play style. Stepping back a tier and taking an old tank friend into combat is something of a solution, but it’s retreading old track. To stick with Blitz for long enough to see its best beasts, you’d need to be a dedicated tank fan — and in that case, why wouldn’t you take a trip to the World of Tanks proper?