Ersatz is an action platformer with a twist. It has a bunch of rhythm elements, with players having to dash, run, slide, and slam in time with an eclectic soundtrack through a total of eight stages.

Its story is slight. In fact, the only information you’re given is that you need to enter a bunch of simulations and complete them as fast as possible. That isn’t important however, as it’s the immaculate sound design and tremendous freedom of movement that makes Ersatz so satisfying to play.

Individual melodies and rhythms signpost enemy placement and behaviour, meaning the more familiar you are with a particular level or track, the more impressive your run will be. The game acknowledges this too, encouraging players to revisit levels by giving them a rank based on how fast they can complete it. Getting a perfect grade is extremely difficult though. Health pickups, for example, add precious seconds onto your final time, so you need to always weigh up whether to collect health or take the risk of continuing without it. 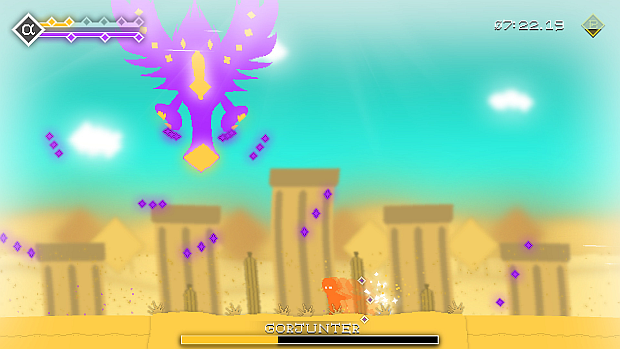 If you’re adopting a more casual approach, the game still has something to offer. Movement is responsive and altogether pleasing to control, regardless of how fast you’re going. Wall jumps are stickier than you might expect, but they give you a tighter grasp on the environment allowing you longer to jump. Dashing and slamming is also tremendous fun. Taking out multiple enemies in one fell swoop is extremely rewarding, as is defeating the bosses with a few well-timed blows.

The game isn’t just worth checking out for its action. Its visual design is another one of its strengths. Ersatz uses bright, contrasting colours to create striking locations and ensure that projectiles are always visible to the player. This is important, considering the sheer number of obstacles the game throws at you and the small margin for error.

The game may be called Ersatz, meaning something artificial or fake, but that’s far from the truth here. Ersatz is an addictive platformer with lots of its own original ideas thrown in and great soundtrack to boot by its creator Paris Stalker.

Ersatz is out now.