I am not Setsuna. I am also not a satsuma, but man alive wouldn't it be a better game if I was? Just imagine. A JRPG where one of the main characters was a round little orange, bopping along on their great pilgrimage across the land without a care in the world? I want to play that game.

Unfortunately, we're stuck with I Am Setsuna, the first and so far best game from Square Enix spin-off Tokyo RPG Factory whose primary aim in life was to recapture ye olde glory days of the genre by being the most paint-by-numbers JRPG imaginable.

Don't get me wrong. There are a lot of things I like about I Am Setsuna (its gorgeous piano soundtrack for one), but it's also a bit like that kid at school who used to copy everyone's homework really badly and then try to take all the credit. Its plot is cribbed straight from Final Fantasy X (girl must go on worldwide pilgrimage before sacrificing herself at the end in order to save it from destruction) but has none of its emotional, tear-jerking impact, while its combo-driven, active-time battle system is lifted directly from Chrono Trigger (character abilities are once again known as techs, and yes, there's even one called X-Strike), but is somehow infinitely less engaging because of it.

(Perhaps because the only way to actually play Chrono Trigger at the time of Setsuna's release was by murdering your thumbs on a mobile phone or digging out your tiny Nintendo DS cart from down the back of the sofa. It was a dark time in 2016, so you'll have to forgive any lapses in judgement surrounding Chrono Trigger-style battle clones. Now that we've got the one true Chrono Trigger on PC, even if it took a while to fix its fonts and get back to its best, rose-tinted self, I Am Setsuna's attempts to win us over with its great, big, blaring nostalgia horn only serves to highlight how basic and crude its imitation really is). 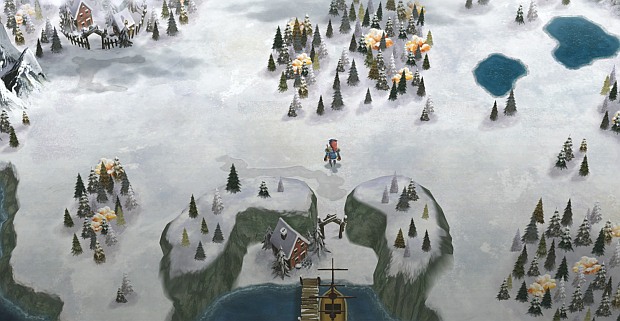 And the snow. Man alive, there was so much snow. Just like in real life, it's pretty idyllic for the first four or five hours or so. Everything looks lovely and cosy and you wish you had a fluffy, furry ruff like masked hero Endir. But you keep trudging further and further across the map with no sign of this endless winter ever lifting or turning into something a touch more tropical. You start seeing it as nothing but the cold, grey slush that gets pushed to the side of the road once people start running out of milk and finally have to force themselves outside to drive to the supermarket. It gets old real quick, just like the combat.

As I said at the beginning, there are things I like about I Am Setsuna. For all its flaws, it's one of the gentler and more approachable JRPGs of recent years, and would probably serve as a good barometer of whether you're able to tolerate the kinds of things this genre is known for if you're a JRPG newcomer. After all, if you can sit through a 20-odd hour game and not cringe every time a character called REAPER turns up and spouts nonsense like "Soon you will know eternal darkness", then this, my friend, is very much going to be your kind of game.