If you click on a link and make a purchase we may receive a small commission. Read our editorial policy.
Can’t Stop Playing is our monthly celebration of a game we're loving. This time, we're enjoying the completely ordinary happenings of pixel roguelike Streets Of Rogue. Watch out for more articles on it throughout the month.

Ah, these familiar, everyday streets. It's a comfort that Streets of Rogue’s city and its many mundane simulated districts are so utterly ordinary. You can keep your Farming Simulators and your Solitaires. It's here that videogames truly reflect our simple reality.

For example, that time four giant gorillas crushed the entire city into dust.

Many of us in the RPS treehouse have been enjoying such leisurely, easygoing moments of humdrum realism. Here's some of the totally normal stuff we've been experiencing, both in the roguelite's co-op mode, and in singleplayer. 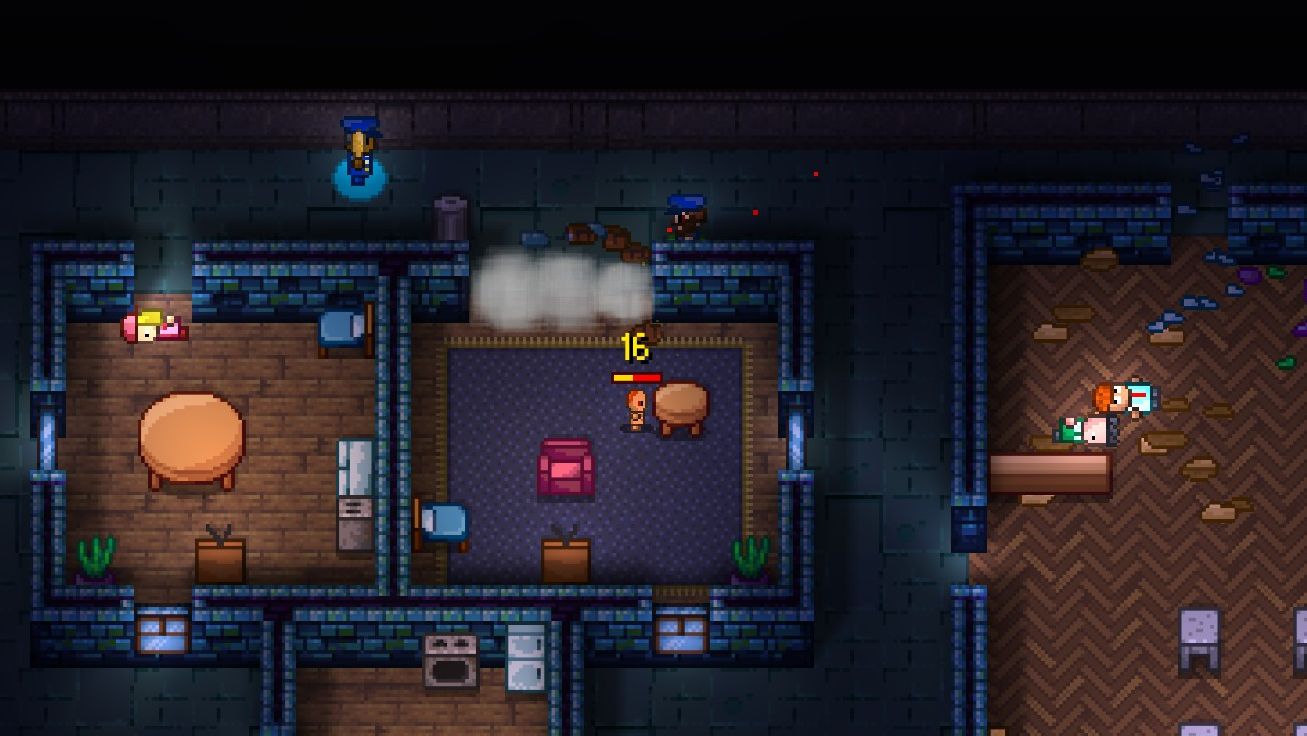 Sin: Why, just last week, my good friend Matt, who I have no plans to betray on the last level in case it's funny, was strolling about the industrial district with me. As a hacker, Matt naturally took a moment to hack into a nearby biology lab and activate its cloning machine, out of which climbed a friendly wrestler. The presence of his new friend inspired Matt to hack into a mysterious nearby building and wander inside to loot it. Somehow in the course of doing this, he angered the local police, who dutifully released a squad of killbots to hunt him down and kill him.

As a body-snatching shapeshifter, this put me in a bit of a pickle. I was currently possessing a slaver, which means I couldn't revive Matt until my host died. I'd just released the three slaves my host was holding captive (typical) and I couldn't revive Matt with cash (another way you can get your partner back in co-op mode) because I'd spent the money cloning my own host.

Like anyone else, I told the loyal clone of the slavemaster I'd recently possessed to face a wall and wait while I threw my host's body at the cops until it died, then popped out of the corpse, ran back to revive Matt, and finally, dived into the back of the clone.

We resumed our stroll. It was an average day. 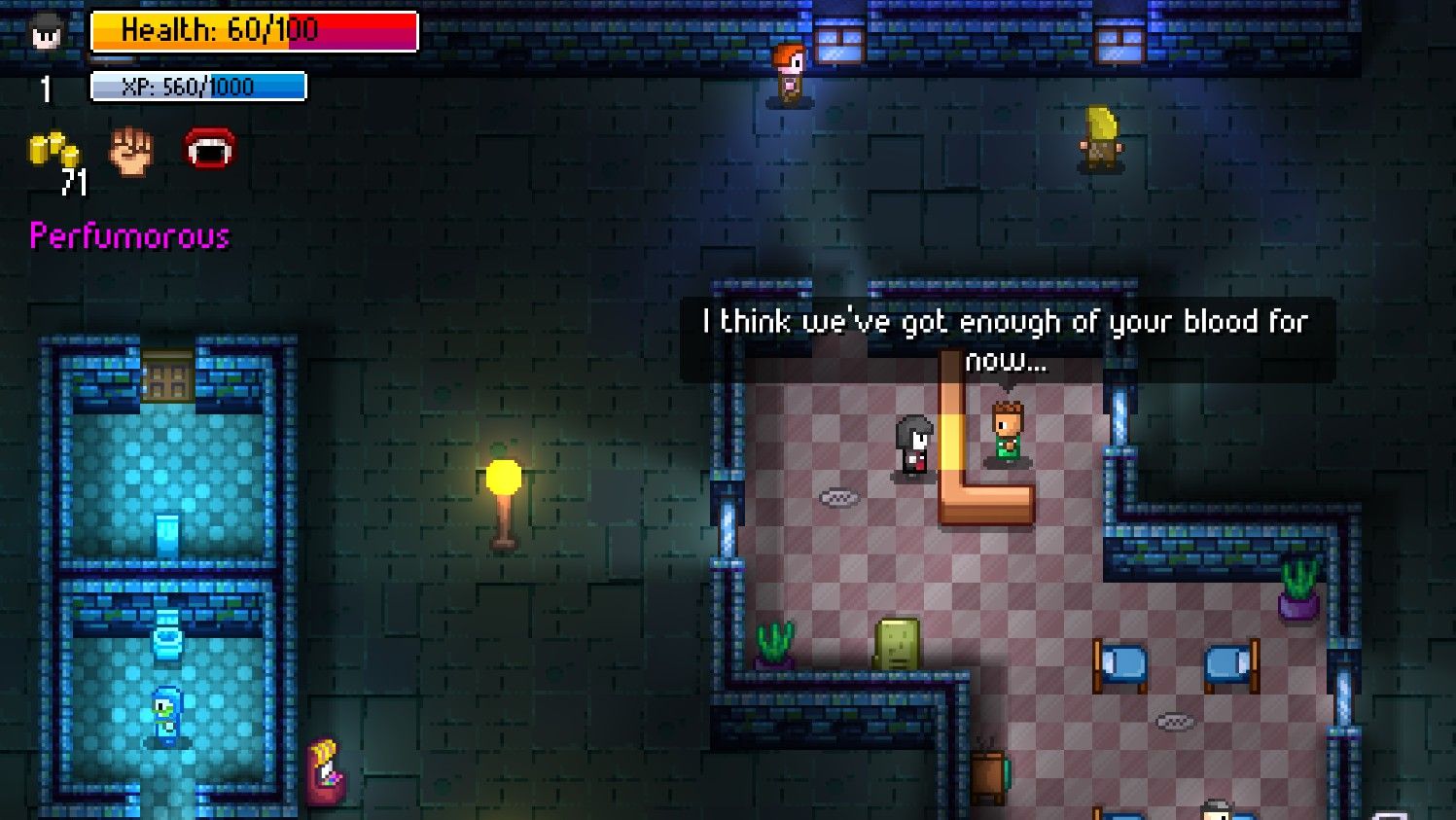 Brendan: In Streets Of Rogue, as in life, sometimes you are short of a few quid. Maybe you need money to buy a packet of cigarettes, or a nice cape. But you don’t want to ravage the dumpsters for pennies, like a slum dweller. So you take a trip to the blood bank. There’s no shame in it, donating blood. It saves lives, and if you get a few coins in the process, what’s the harm? I’ve heard people say vampires hang out at blood banks. But, ha ha, that’s ridiculous. Who would believe such a thing.

Not I, a regular human. The legends say a vampire character has the power to sneak behind a bystander and suck the victim’s blood to refill their demonic health bar. Quite a clever method of restoring health, uh, not that I condone it. It’s true, a smart vampire might realise donating blood in one of the game’s clinics is essentially trading your health bar for money. You could, if one were so darkly inclined, make several repeat trips to the blood bank. Donating healthblood, nipping out to find a quick neck to suck, before popping back into the clinic fully healed and ready to donate once again. I mean, yes, I freely admit I am here in the blood bank a fourth time, with no health issues save for a bit of pallor (it’s nothing, honestly) nor any sign that I have donated three times already except my bulging wallet. But, ha ha, that does not mean I’m a sanguinous demon of the night. Don’t be absurd. Clerk, please, one more donation, be reasonable.

“I think we’ve got enough of your blood,” he says, warily.

Foolish clinician! You can never have too much blood! 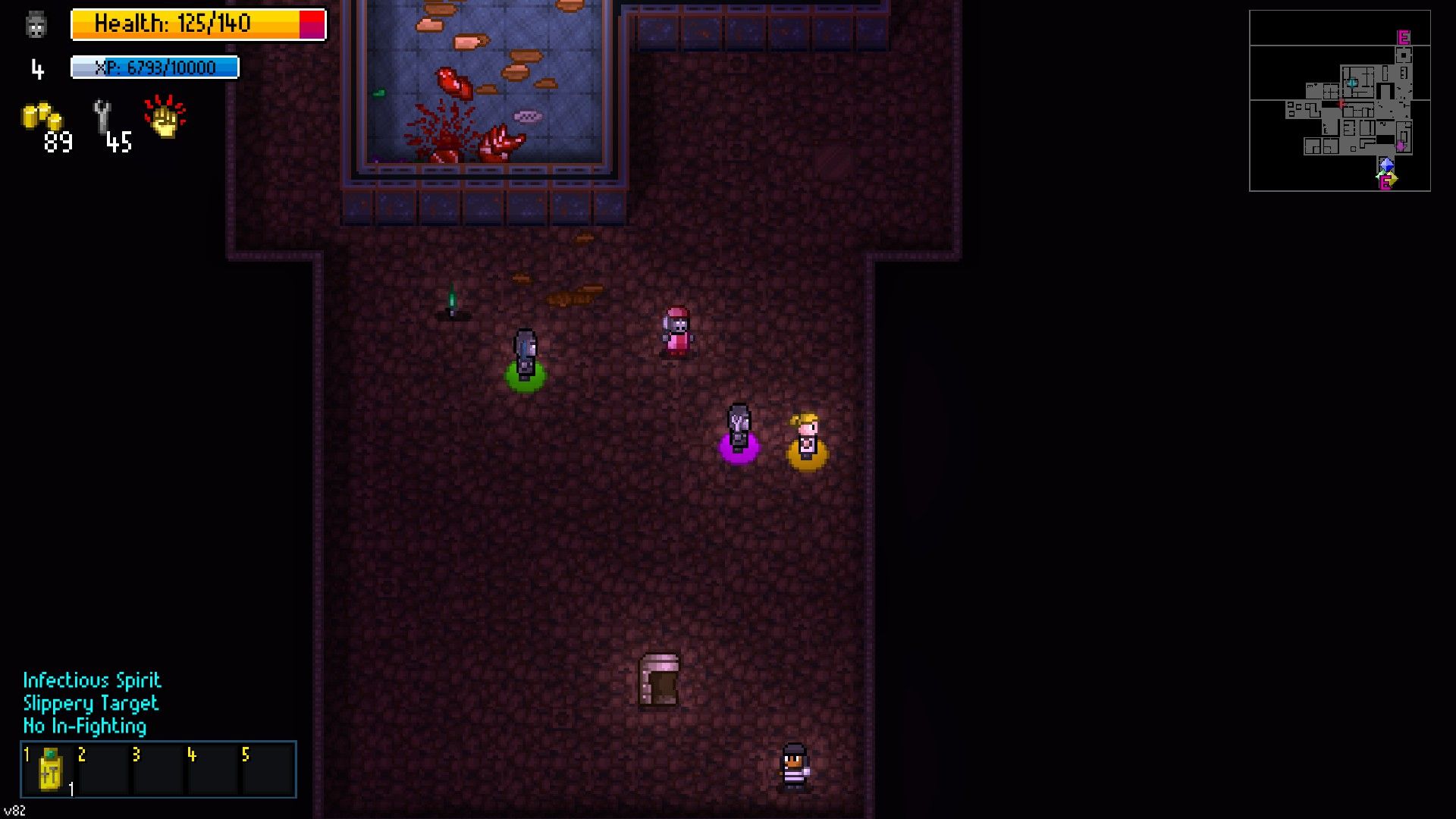 Matt: Me and my gorillas were out for a walk. I, also of the gorilla persuasion, had spent the last few days freeing them from various scientists across town. The Streets have an inordinate number of ape-abusing scientists. It is a problem.

Less of a problem, now. For on our stroll we found a lake, and my friend Gareth was fortunate enough to fall in. We watched, amazed, as his frame rippled, expanded. Within seconds we were in the presence of a giant gorilla god. Exalted. Ready for revenge.

We looked at each other, stunned by the destructive potential an unseen power had just handed to us on a plate. It was a lake of gigantising juice. We jumped in, and painted the town red. 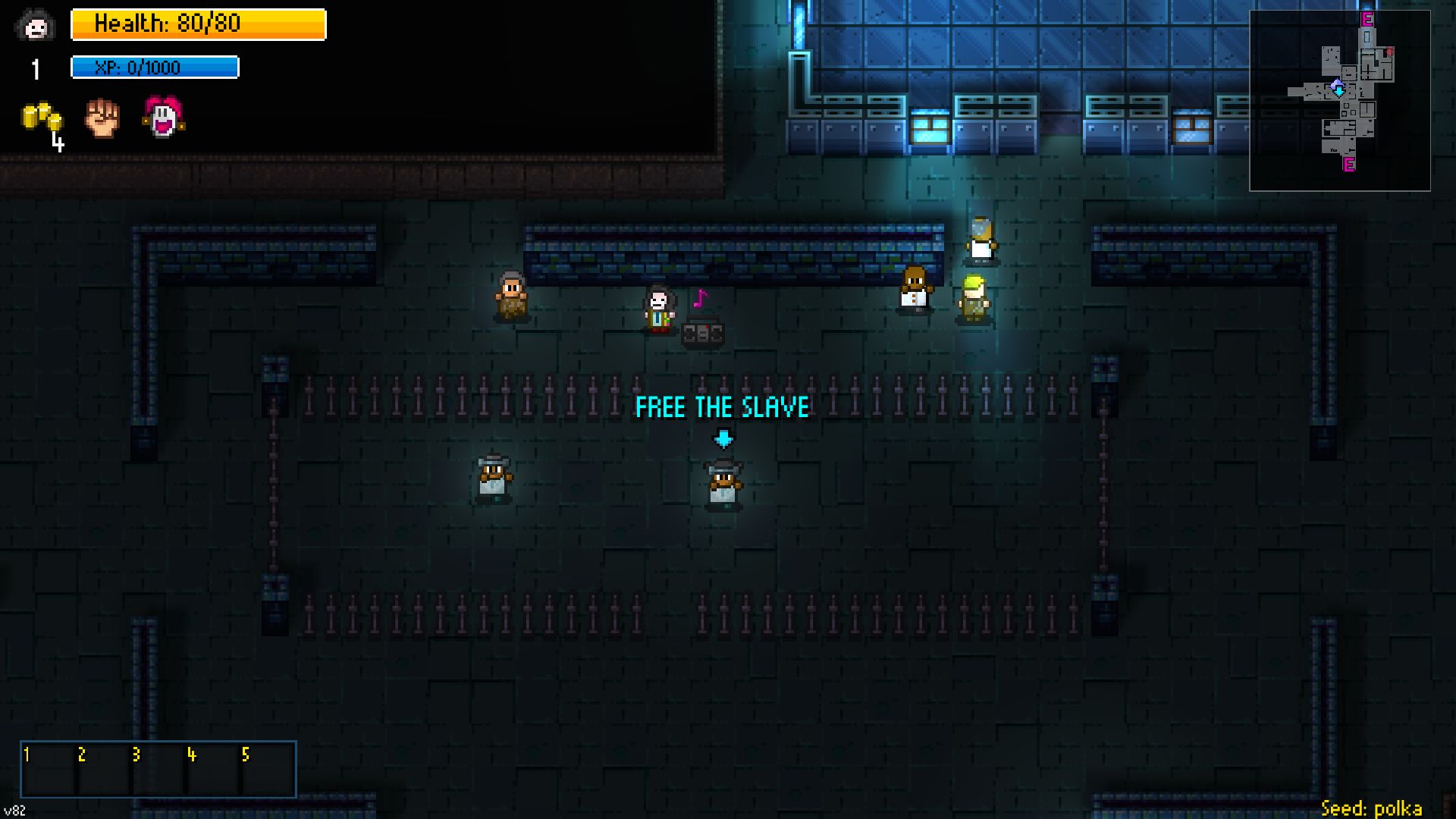 Astrid: As well as the preset selection of people, creatures, and eldritch horrors Streets of Rogue gives you to play with, you can also create your own character classes by combining various costume pieces, items, traits, and special abilities. I wanted to do exactly that. So I opened up the character creator and started messing around with various hairstyles and shirt choices until I realised that it was incredibly possible for me to make satirical singer-songwriter Weird Al Yankovic. And that’s exactly what I did.

I began on a world procedurally generated using the word “polka.” Step one, amass a legion of loyal Yankovic fans. To do this, I knocked on doors, tapped on windows, and harassed pedestrians into listening to my funny jokes. Many people (most people) felt slighted by Al’s attempt at comedy. There were a few who found the japes hilarious, though, and as such decided to loyally protect me, with their lives, at all costs.

Step two, free a slave. I couldn’t just murder the slavemaster. Weird Al’s a pacifist you see, on account of his vegan lifestyle. Fortunately, I had a boombox blasting out some tasty tunes that I’d assume to be some of Yankovic’s own discography. People flocked. The slavemaster, the slaves, my loyal Weird Al death legion, the scientists from a neighbouring gorilla experimentation laboratory, everyone came to dance their arms and legs off to Amish Paradise. Now unguarded, I popped into the lab and released the gorilla, who went on to attack the scientists who were dancing next to the slavemaster, the slavemaster got caught in the crossfire, as did my fans. It was a fucking massacre. The slave was freed, only shortly before suffering at the hands of a furious primate. What have you done, Weird Al? What have you done? 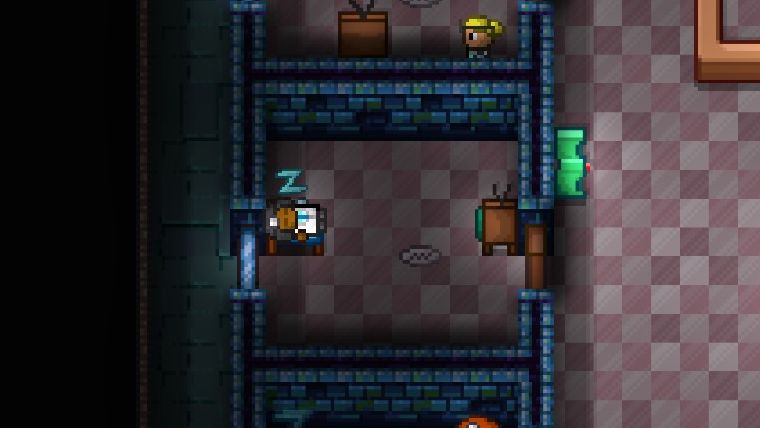 Nate: Three in the morning. A doctor stands alone in his living room, dressed in crumpled scrubs, lit only by the sordid cathode glow of a television set. In the corner, a refrigerator sweats and chugs, struggling to keep a tub of brown food paste below body temperature. It is an unpleasant, lonely night.

There is a knock at the door; three knocks, in fact. A curt staccato of knuckles, the call of the night. Is it the law, come for the doc’s license at last? Or is it the mob, hauling in some bullet-tattered thug for repair? Either way, he knows he must answer, or it’ll be the worse for him. As it happens, this is a mistake. It is his last mistake.

In the doorway, framed by the flickering light of oil-drum braziers, stands a colossus. A wrestler, whose face alone seems as big as a cow’s. His skin is like varnished ham, interrupted only by a greasy, faded codpiece. His mouth is downcast, his steroid-yellowed eyes almost apologetic in their melancholy. In his hand, a leafblower, cranked to impossible, comical strength.

The device blasts into life with a windy bellow, and hurls the doctor across his room. Blut, and there’s no person there any more, just a spray of glats scattered over rubble. The wrestler does not waste time contemplating the mess; he bounds to the fridge with primate urgency, and claws it open with his filthy hands.

There: the jar. He guzzles it down like Popeye redesigned by Hieronymus Bosch, and smacks his lips before tossing the empty vessel aside. He was not even hungry.