You're naked, in the desert, with a grubby carrier bag at your feet. "What's inside?" reads a note taped to it, in jaunty comic sans beneath a Hearthstone logo. You are just crouching to look, when you hear rustling. Ten paces away, an emaciated, dog-eyed wreck of a man is rummaging through a bag of his own, and you are struck with the sudden, brutal understanding that one of you must die here. You search the bag for a weapon, but find only nonsense: a broken tin opener, an onion on a string, a faded novelty telephone that looks just legally distinct from Garfield. And now, your opponent is advancing. He has a half-blunted Stanley knife in his hand, and a cringe of desperate, feral hope on his face. You are going to die.

Terror seizes you, but in the same instant, your hand closes on rough iron in the bag's polythene belly. An ancient revolver, heavy and rust-caked, with a single round taped to the barrel. Your fingers tremble as you fumble the slug into the chamber. Your mind goes blank, so that when the shot rings out across the waste, it feels as if it comes from far away. You do not look at the man's face, as he bleeds out onto the dirt.

You blink, and the body has gone. So has the revolver in your hand. A new bag is set out on the ground, and a new opponent stands across from you. This one is different, though. He is a small, round man in garish clothes, with a big floppy top hat and a ludicrous felt cravat. But while his face is plastered with a merry smirk, his eyes are the frigid, glassy beads of a predator's. You reach down for the bag - but as you do, your arm breaks a hair-thin strand of silk. Tripwire, you realise, just before the blood springs from the crossbow bolt buried deep in your thigh. With a comedy slide-whistle noise, the bag slides back from your shaking hand, and you're forced to stagger, bleeding, in pursuit of it. The buffoon - who has also slid backwards, without moving at all - just watches and grins. 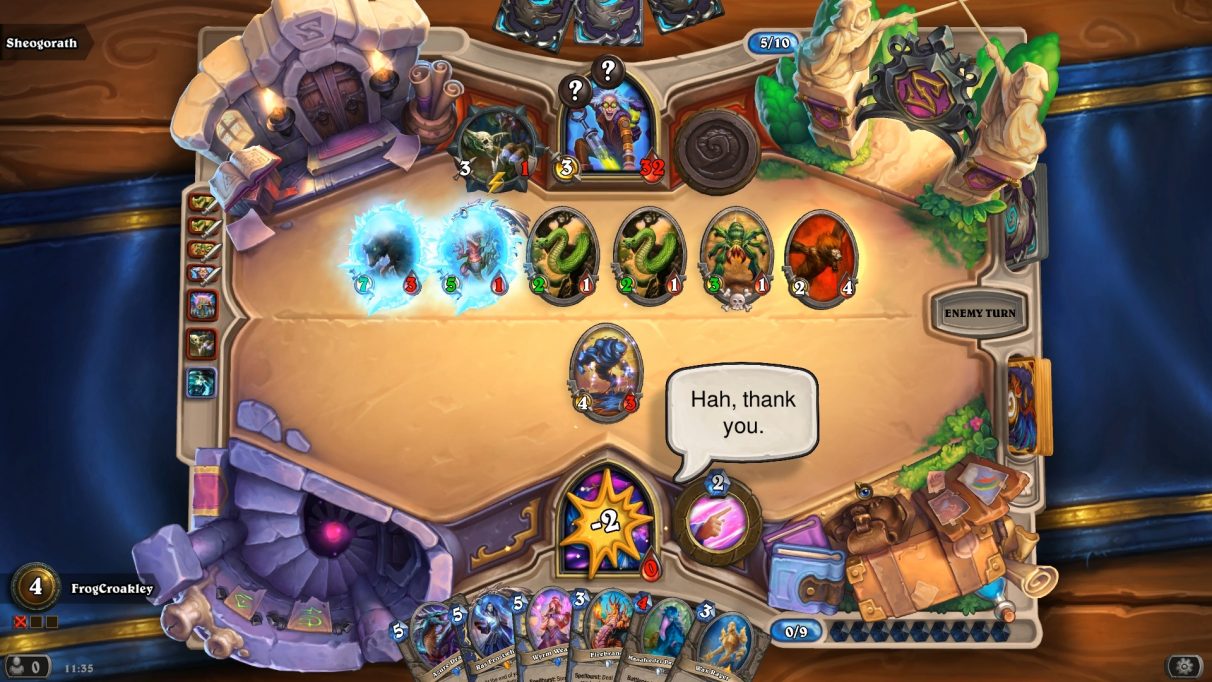 As anger begins to smoulder and smoke beneath the pain, you pounce on the bag. But all you withdraw from within is a handful of ants and rusty nails. "Wooooah! RANDOM!" shouts the buffoon, right into your ear. He has an obnoxiously loud, toy-advertisement voice, like a sex offender doing a bad impression of Barney the Dinosaur. You hate him, viscerally. Indeed, before you can even wonder how the hell he got so close so quickly, rage has launched your hands from the useless bag so that they can strangle him.

Duels takes the incremental development of ludicrously overpowered decks, and applies it to a PVP, three-losses-and-you're-out format.

Your fingers sink into the warm, clammy skin of his throat. But a gust of wind blows grit in your eyes, and by the time you've blinked to clear them, there is of course a giant cartoon bomb between your hands instead, fuse fizzing. "Uh-oh!" exclaims the clown, as he cavorts with a gurn of relish, thirty feet away. "Looks like someone needs to work on their strategy!".

Your palms burn, the skin feeling suddenly tight. Ah. Superglue, you note. But it's fine. Annihilation is a small price for denying this bastard another moment of joy in your suffering. You wouldn't throw the bomb away, even if you could. "Wacky fun!" bellows your tormentor, and you are blasted apart in a cloud of ragged meat-scraps.

This is exactly how it feels to play Duels, the new game mode for Hearthstone. And I really rather like it.

Duels is explained, perhaps less colourfully, by Blizzard in this blog post. But basically, it takes the incremental development of ludicrously overpowered decks that made the single player Dungeon Run from December 2017's Kobolds & Catacombs so good, and applies it to a PVP, three-losses-and-you're-out format similar to Hearthstone's longstanding Arena game mode.

You start each "run" with a unique new hero power and a single, high-powered new card unique to your class, to which you're free to add 15 further cards from an abridged version of the game's full library. And once you've completed a duel, you get to choose between three "buckets" of three additional cards, intended to complement your existing deck. Every couple of matches, you're also offered a preposterous "treasure" card, of the kind you'll be familiar with if you've played much of Hearthstone's single player content. Lose three times, and the run's over. 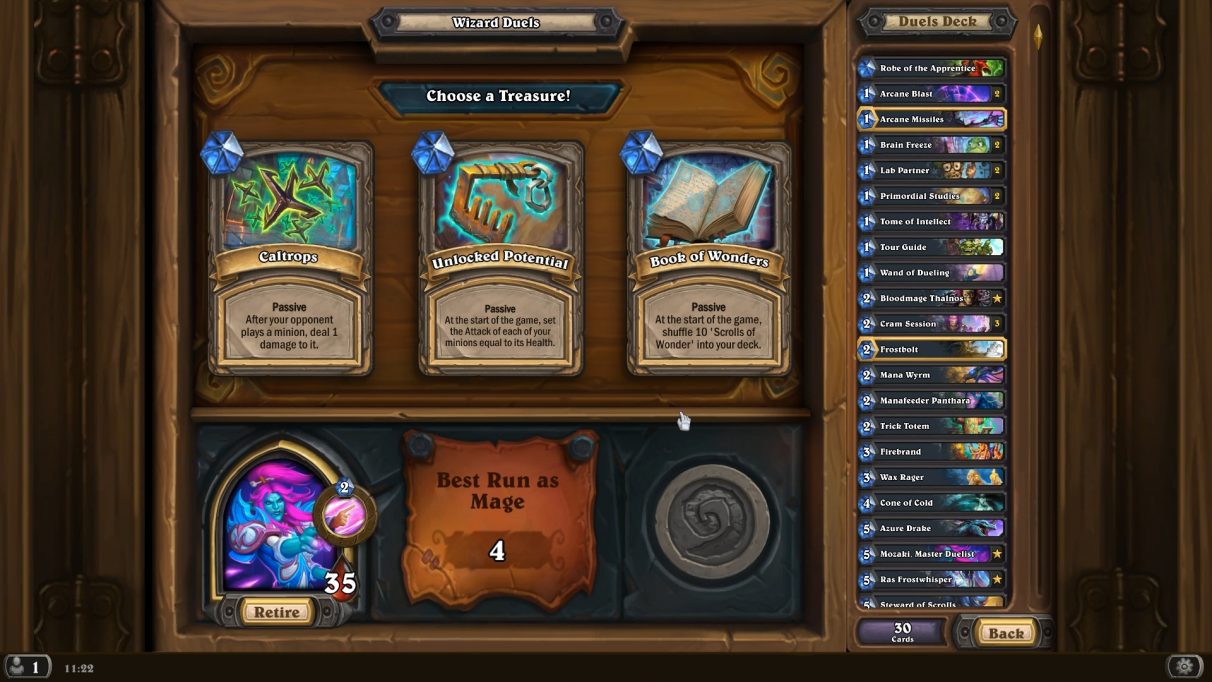 It is... a bold move, building a competitive game format around the concept of "completely broken decks clashing at random". I mean, let's face it, Hearthstone is barely a contest of skill at the best of times. Chance weighs so heavily in the way games play out, that even pro players only maintain their status by eking out a win rate marginally above 50 percent. Even then, a good win rate is at least as much to do with a constant awareness of which classes and archetypes are outperforming the average deck, in the ghastly slow-motion ballet referred to as "the meta".

Duels, then, feels almost entirely a game of chance. If you're offered rubbish treasures, or they're buried deeper in your deck than they are in your opponents', or if your "bucket" options aren't actually that well synergised with the deck you've built, you're just stuffed. You'll be obliterated with such ease that your survival will last only as long as your opponent enjoys playing with your food.

Additionally, duels is in early access still, and won't launch in its full initial form until November 17th, which means of course that the balance is completely and utterly mangled. There are nine heroes on offer (of which you get a choice of four at the start of each run), and several are unplayably weak. Unless I've been seriously unlucky, for example, piloting the Rogue class feels like wheeling a patient on a life support machine into a ring with six enraged boxers. If you're unlucky enough to be matched against someone playing Paladin, which is currently nearly unstoppable, this becomes a dozen boxers, each of whom is nine feet tall. 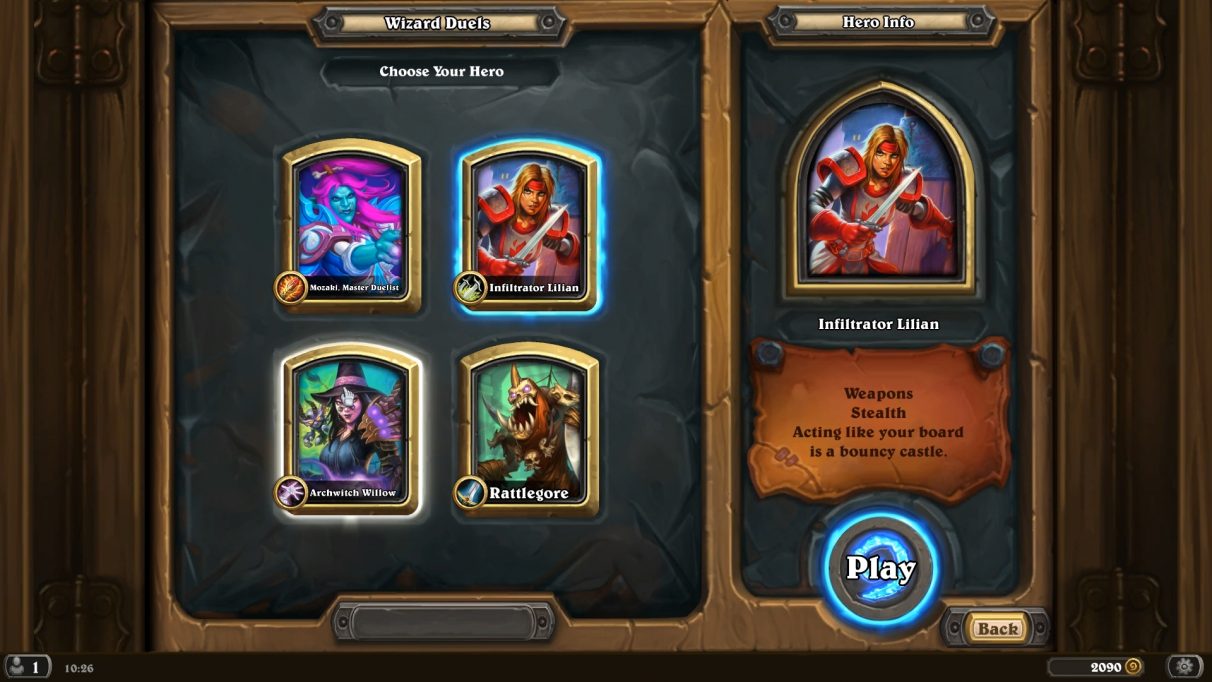 I'm sure this situation will improve. But even now, it's fun. Yes, it's maddening, and reduced me to hissing swear words at my screen with cat-piss sourness time and time again. But occasionally, by contrast, I got to be the clown gluing a desperate man's hands to a bomb. And that was, I'm depressed to report, very satisfying. I know this is just one brief note of praise, but I can't emphasise it enough. When your deck's theme falls into place and actually works, it generates that exact same, elusive compulsion that Dungeon Run achieved so well.

Quite simply, if you like ludicrous card interactions, which I do, and find that they're so often stymied by the super-serious, hyper-efficient deck and play styles mandated by the standard ladder format, Duels is a right lol. It's just definitely not something to consider as an actual contest, at least in its current state.

One thing about Duels does really annoy me, however, which is that to play this broken early access version of it, you have to pre-purchase the £35 card bundle for the upcoming Trouble At The Naughty Circus expansion. Sure, it's not a bad deal just in terms of the cards you get, and the basic version of Duels will be free to play on release. But even so, paying to provide QA data always feels a bit of a slap in the face. 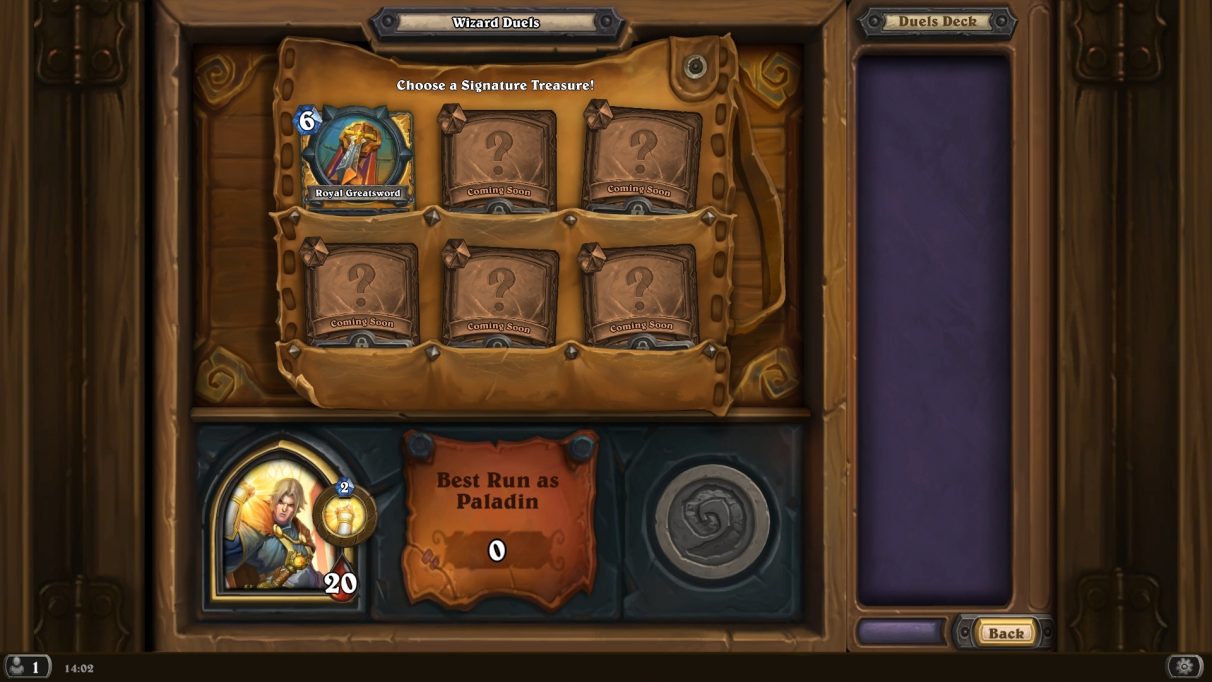 More annoying still, it turns out that certain hero powers and treasures in Duels will be unlocked by collecting certain numbers of high-rarity cards in the main game - which, in classic F2P style, either involves a vast amount of patience, or a willingness to spaff loads of pounds into a mystery box and hope for the best.

I don't usually get all pompous about value for money and greed, et cetera, but this stings. When the entire game mode boils down to which desperate wretch can find the lethal weapon in their carrier bag first, it seems a bit crass to let people slip in a few extra handguns for a blunt cash payment. Maybe it'll work differently in practice, but it looks a lot like Pay To Win to me. And while it's fun to be the dickhead clown in Duels, it's not something I'd pay for the privilege of.