As part of its eventual launch on Steam, daunting simulation Dwarf Fortress has been planning a big visual overhaul. "Now with graphics!" Bay 12 proclaim on the store page. In a new little update, they're giving us a look at what the generated world maps will look like with these non-ASCII pixels—though, yes, you'll still be able to use the symbols if you prefer. The work-in-progress map is still pretty cluttered as Dwarf Fortress maps tend to be, but dang is it easier to look at.

"The image is larger and square since we've moved from 8x12 ASCII glyphs to 16x16 tiles," Bay 12 say of the new version above. It's cropped here, but you can see the full map in Bay 12's blog post.

"There's still quite a bit to do with river mouths and wetlands and oceans and mountains and trees and so on, of course. But we've arrived at a point where it accomplishes the goal of making the world map more easily understood and thought it would be fun to share."

Below is the same map in Dwarf Fortress's original style—augh my eyes! 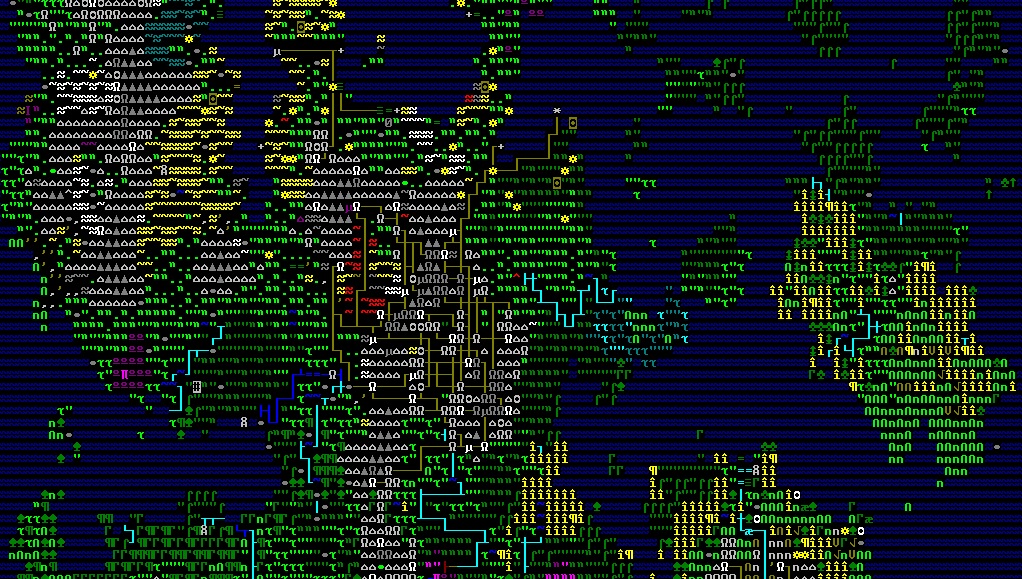 I may sound like a broken record—I said the same thing when Bay 12 gave a preview of the new Dwarf Fortress tilesets—but the black on green on gold symbols of traditional Dwarf Fortress are a big nope from me. I have very, very bad eyesight and an astigmatism and sit at a monitor every single day so I just cannot deal with the visual attack. I know community folks have made lovely tilesets to alleviate that pain but I've just never taken the plunge.

If you're into stories about dwarf colonies by someone who knows a lot more about 'em than I do, Nate's been on a lengthy Dwarf Fortress journey in his The Basement of Curiosity series. It's a proper epic.

Dwarf Fortress's launch date on Steam is still listed as "time is subjective" so, yeah, we don't know when you'll actually be able to play it with the spiffy new visuals. For now, the brave among you can still download classic Dwarf Fortress on Bay 12's website.