Santa Fortuna is the third mission in Hitman 2 and sees the globetrotting Agent 47 travel to Columbia to eliminate three important members of one of the world’s largest drug cartels. Again, the challenge slowly ramps up once more compared to the previously locations as you’re given more targets to track and some significantly more dangerous locations to infiltrate. Our Hitman 2 Santa Fortuna guide will make things a little easier for you, by describing how to assassinate all three targets, as well as point out useful items and locations of interest.

If you are just starting out, you might want to familiarise yourself with some tips on starting load-outs how to be an effective assassin in our Hitman 2 guide hub. If you want to go in a little more prepared for specifically the Santa Fortuna mission though, read on.

In the Three-Headed Serpent mission, your objective is to assassinate three key members of the Delgado drug cartel. The trio is scattered about their home base in Santa Fortuna and very rarely meets in the same place, so your best bet is to take them out individually within the locations they can regularly be found.

Santa Fortuna itself is a small, rural village. There’s a small residential area and an even smaller section of the jungle where tourists can take in some of the beautiful scenery, though stray too far from these parts and you’ll encroach on the Delgado’s private territory. With a vast drug empire to control, they’re very heavy on security and extremely suspicious of new faces poking around in places they shouldn’t be, so be cautious if you venture towards Rico’s mansion or the coca plantation in the bottom corner of the map.

Rico Delgado is the leader of the Delgado cartel and head of a billion-dollar drug empire. That means he’s living a life of complete luxury in his exotic mansion (complete with pet hippo), although he still takes his security very seriously and is constantly surrounded by guards. Getting inside is a difficult enough task, let alone finding a way to kill him undetected. A celebrity tattooist has been called to help fix some terrible ink of his wife, so that’s one way in.

Otherwise, you can find a couple of ways to lure him out of his home. You’d never guess, but Rico is a bit of a narcissist and is having a statue of himself unveiled in the village. The foundation doesn’t look particularly strong, though, if you’re capable of giving it a nudge during the grand opening. Meanwhile, in a series of underground caves, Rico is looking into using submarines to deliver his goods. He’s excited to test out the new sub’s engine and see it pushed to its limits. Maybe you could increase those limits beyond its capacity.

Meanwhile, Andrea Martinez spends most of her time in the village. She serves as the business manager of the operation, ensuring everything runs smoothly, the right palms are greased and every obstacle is removed. She’s having trouble with some construction workers who refuse to complete a project for her and could find herself having an accident on one of her many trips to the site. Some relationship drama is also brewing in the cartel that 47 can stick his nose into to rachet up the chaos.

Lastly, there’s the cook, Jorge Franco. He’s busy toiling away on a new experimental drug recipe over in his plantation, though a few roadblocks have slowed progress. A new source was supposed to show up and present him a new drug delivery method, though the source is currently hiding in the hostel in the village after a small disaster with his kit. Also, a new piece of tech was supposed to arrive for Jorge’s cocaine machine, but until it does more manual labour is required. Finding that delivery can speed up the operation again, though Jorge’s enthusiasm for the machine may lead him to step a little too close to it. 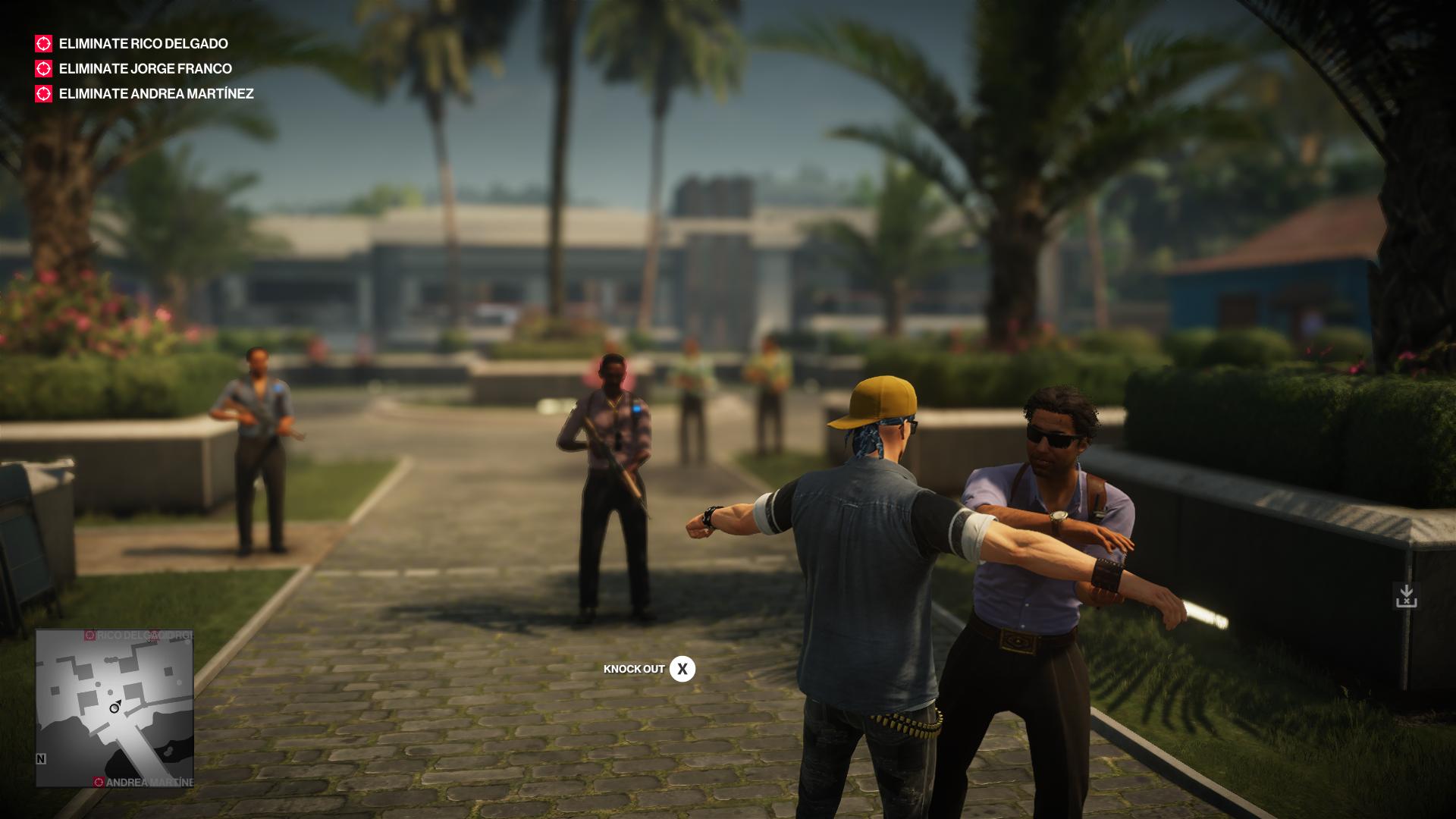 Santa Fortuna village - 47 starts here on your first playthrough. There’s lots to see and do here, including the hostel, the statue unveiling ceremony for Rico, Andrea Martinez’s office residence and a handful of other innocuous looking buildings containing many useful items or disguises.

Rico’s mansion - Dead in the centre of the map. If you begin at the original starting position the mansion will be directly in front of you. You can tell by the ridiculously imposing gate. Getting in is a whole other challenge. The tattooist or mansion guard disguises are good bets, or you can sneak in the rear through the underground cave system.

Caves - Rico is experimenting with new methods of delivering his drugs to the world in a network of underground caves below Santa Fortuna. One such method is by using a specially designed submarine, which you can find and tinker with in the caves.

Coca plantation - The heavily guarded coca plantation is in the bottom right of the map. Fortunately, there’s a whole lot of crops here you can hide in to avoid detection, though nabbing a worker or guard disguise will make your life a lot easier. This is where you’ll find Jorge Franco for most of the level.

Shaman’s hut - Head down the main road out of the village, turn left into the mess of foliage, follow the path and eventually you’ll reach the shaman hut. There’s not much to do here except watch some tourists get insanely high and then steal the shaman disguise, which you’ll need for the Hallowed Grounds mission story.

Fishery - Loop out the back of the village past Andrea’s offices and you’ll spot the fishery on the left-hand side. There are a few useful items to gather here, plus the starting point for the Submerged mission story.

Construction site - Work has come to a halt at the construction site as the workers have uncovered an ancient burial site and have downed tools until the shaman performs a cleansing ritual. It’s created quite a headache for Andrea Martinez, who can be encouraged to visit to try and solve the issue. Many accidents can happen on a construction site, though. 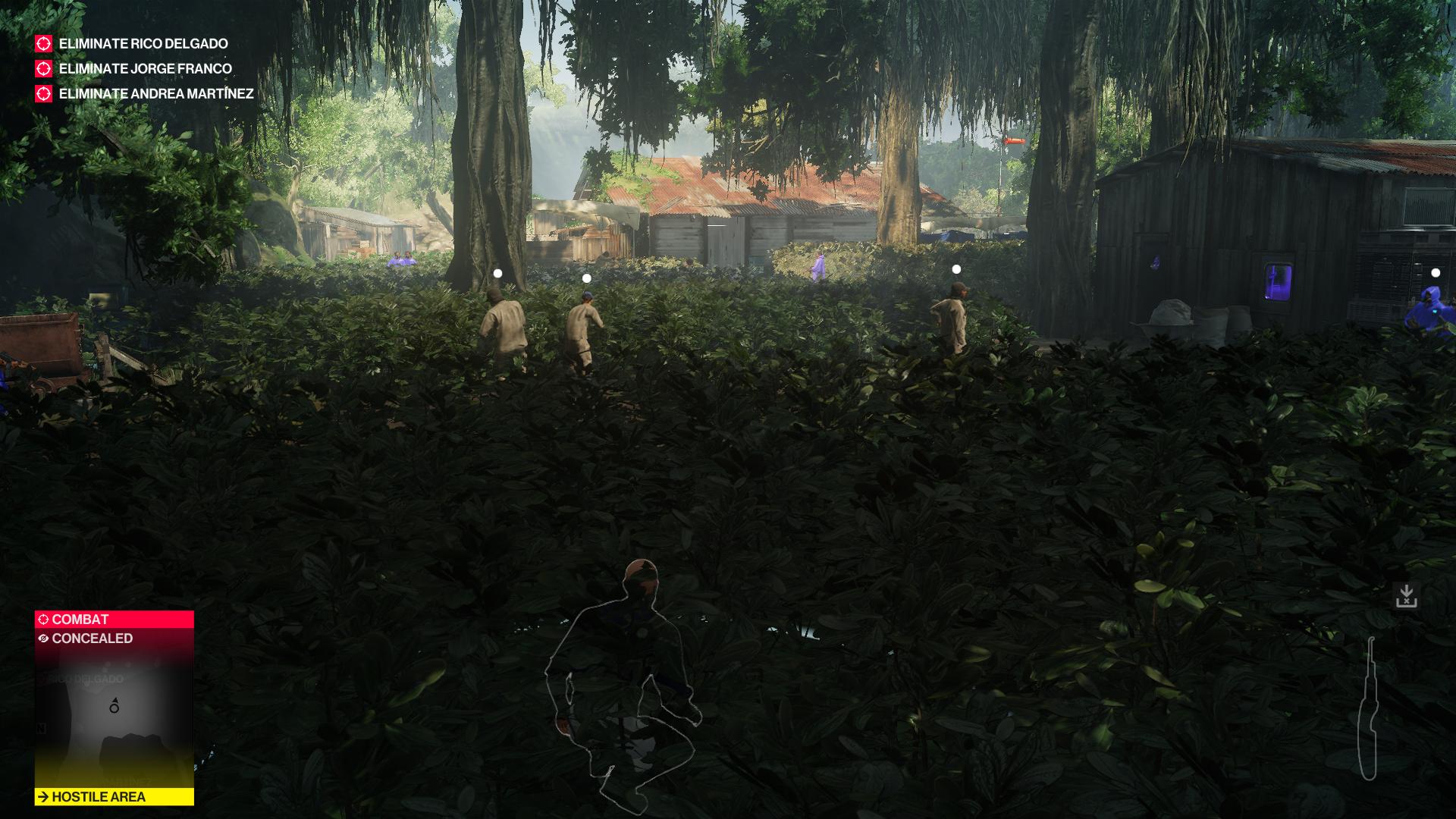 Drummer - One of the small houses at the back of the village towards Andrea’s office is blasting out some seriously loud music. If you sneak inside you can find the drummer who was set to perform with the band at Rico’s statue unveiling dead in his bed. Easy disguise.

Shaman - Go down towards the main road out of the village and you’ll see two guards chatting by a jeep. Turn left there into the jungle, follow the path for a short while and eventually you’ll emerge at the shaman’s hut. Once he’s performed a ritual for a gap yah moron you can subdue the shaman and nick his robes.

Tattooist - The famous tattooist is nervously drinking at the bar opposite the fishery awaiting his meeting with Rico Delgado. That beer bottle is just waiting to be poisoned, after which he’ll flee to the toilet in the back where you can take him out quietly. Remember to throw him out the window and into the dumpster outside to ensure no one finds the body.

Construction worker - On the left-hand side of the village as you move up towards Andrea’s office, a construction worker is toiling away in one of the buildings alone. You can distract him by turning off the radio in the room below and take his clothes without fear of being spotted.

Backpacker - On the right-hand side of the village as you approach Andrea’s office is the hostel. The backpacker is on the balcony above chatting with a fellow traveller. He’ll eventually wander off to try and solve his little drug mishap, where you’ll be able to nab his outfit in a quiet place.

Cave worker - A woman at a food stall right at the entrance of the fishery mentions her injured husband, who is trying to avoid going back to work for Rico. If you follow her to the back corner of the fishery you’ll see him hiding there along with his uniform you need to get access to the underground caves.

Mansion guard - If you make your way through the back of the caves and past the ancient ruins you’ll emerge at the rear of Rico’s mansion where he keeps his pet hippo. There’s a lone guard in this area who you can knock out and hide in a nearby container after stealing his clothing.

Rat poison - Can be found on a shelf in the medium-sized warehouse at the far end of the fishery opposite the bar.

Glue - Yes, one of the strangest mission stories in Santa Fortuna requires glue so you can repair a toy bus that’s used to smuggle drugs. Obviously. Getting glue is a small ordeal, though, as the shopkeeper has sold his last lot to the mechanic at the edge of the village by the main road. He’s not too keen to give it up, so you can introduce him to a chokehold to get it.

Circuit board - An important piece of kit for Jorge’s cocaine machine has gone missing in transit. You’ll be able to find it in a red box teetering on a precipice above the plane crash just a short walk from the shaman’s hut. Conveniently, a pile of fruit has fallen nearby that you can use to throw at it and knock it off its perch.

Poison flowers - There are many of these dotted around the map, but the best place to find them is over in the foliage by the shaman hut once again. They’re large, bulbous and purple, so easy to spot in all the greenery.

Coca lab keycard - Right at the back of Jorge’s coca plantation by the water’s edge is a small hut. The keycard is inside. You can lure the assistant outside by tampering with the air con to gain access. 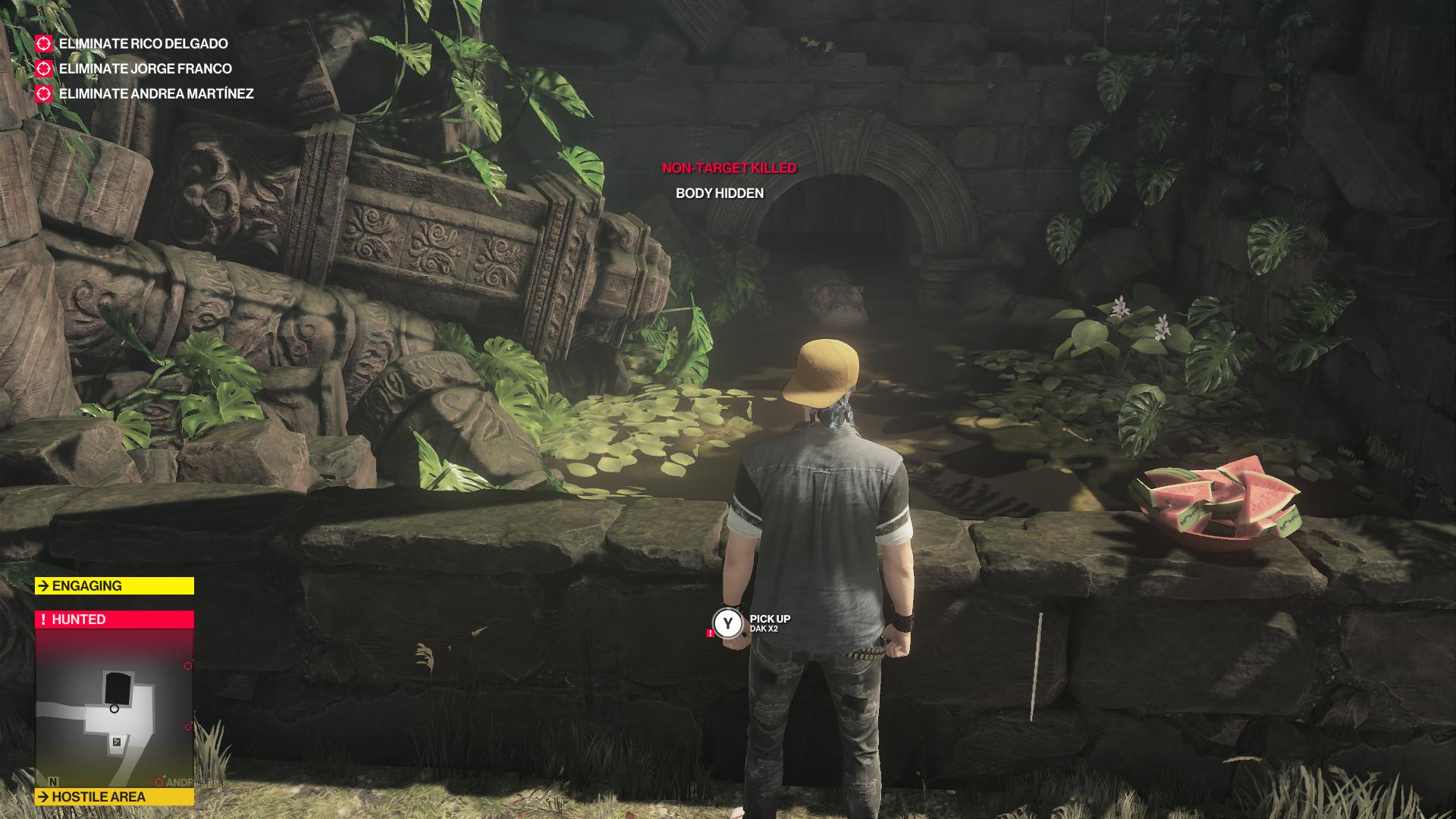 After dealing with all three targets and escaping the premises, you'll be done with this mission. Where to next? Maybe head back to Miami to kill the targets in another way? How about a trip to Mumbai? You can always return to our Hitman 2 guide hub for anything else you may need.