Metro Exodus works poorly as a morality tale, a thriller, a horror, or an epic hero’s journey. Played as a lyrical ballad, however, a Soviet drinking song belted out around an oil drum camp fire, complete with bad jokes, questionable embellishments and drunken operatic flourishes, it starts to make sense. It is a profoundly odd game, I found, though not in the same ways as its predecessors. It relinquishes the series’ supernatural elements in favour of a campy uncanniness, a blasé chuckle in the face of desolation, and a childlike optimism at finding a slightly shinier variety of shithole at the outskirts of a doomed world.

A bestial mutant Watchman perched on a car wreck, howling at the jaundiced skyline. That’s the image I conjure when I think of Metro, one that I feel best captures both the series’ melancholy and danger. The series has a third element, though, surfacing strongest in Exodus, that took me a little longer to parse out. After some hardcore chin-stroking, the best word I think I can come up with is ‘Chumminess’. Metro Exodus is gaming’s chummiest post-apocalypse. 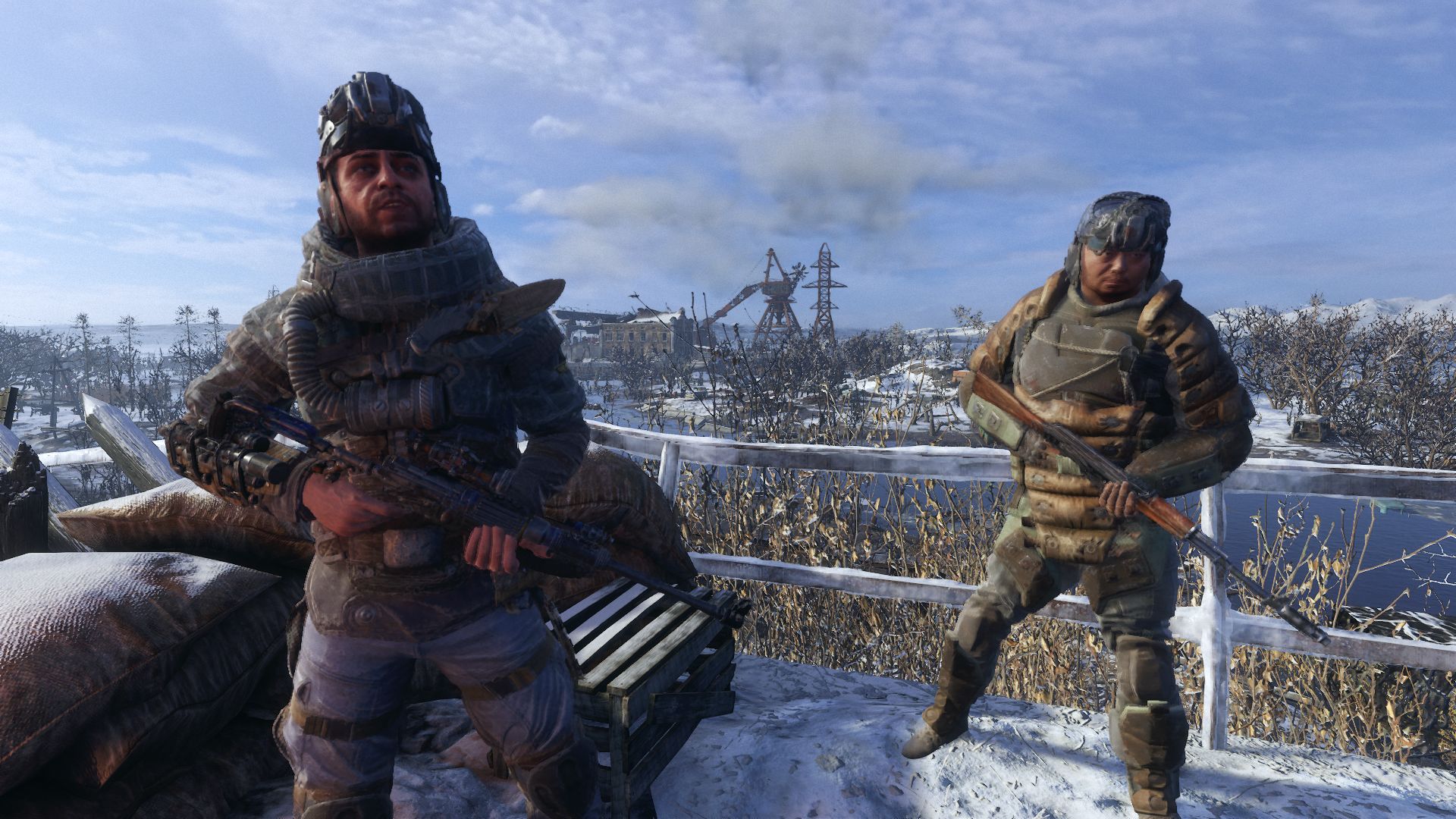 This oddly matey vibe in the face of horrible shit starts to creep in as early as the introduction. As Artyom’s Spartan buds haul his irradiated body to the doctor, you can hear a metro dweller comment “Looks like Artyom’s been on one of his mad trips up top!”, in the same tone that you might expect them to say “Looks like Artyom's hit the glowing mushrooms and singed all his pubes off after mistaking them for a giant spider web, the absolute mad lad.”

Colonel Miller is great for this kind of thing. From his ‘You darn wacky kids, you’ve gone and found my top secret choo choo!’ speech when he realises it’s Anna and Artyom who’ve hijacked the Aurora, to the laugh track-expectant delivery of “Now we’re not just traitors, we’re honest to god enemy saboteurs!” after you destroy the attacking train. Miller is about ten percent stoic war hero, ninety percent perpetually exasperated dad. 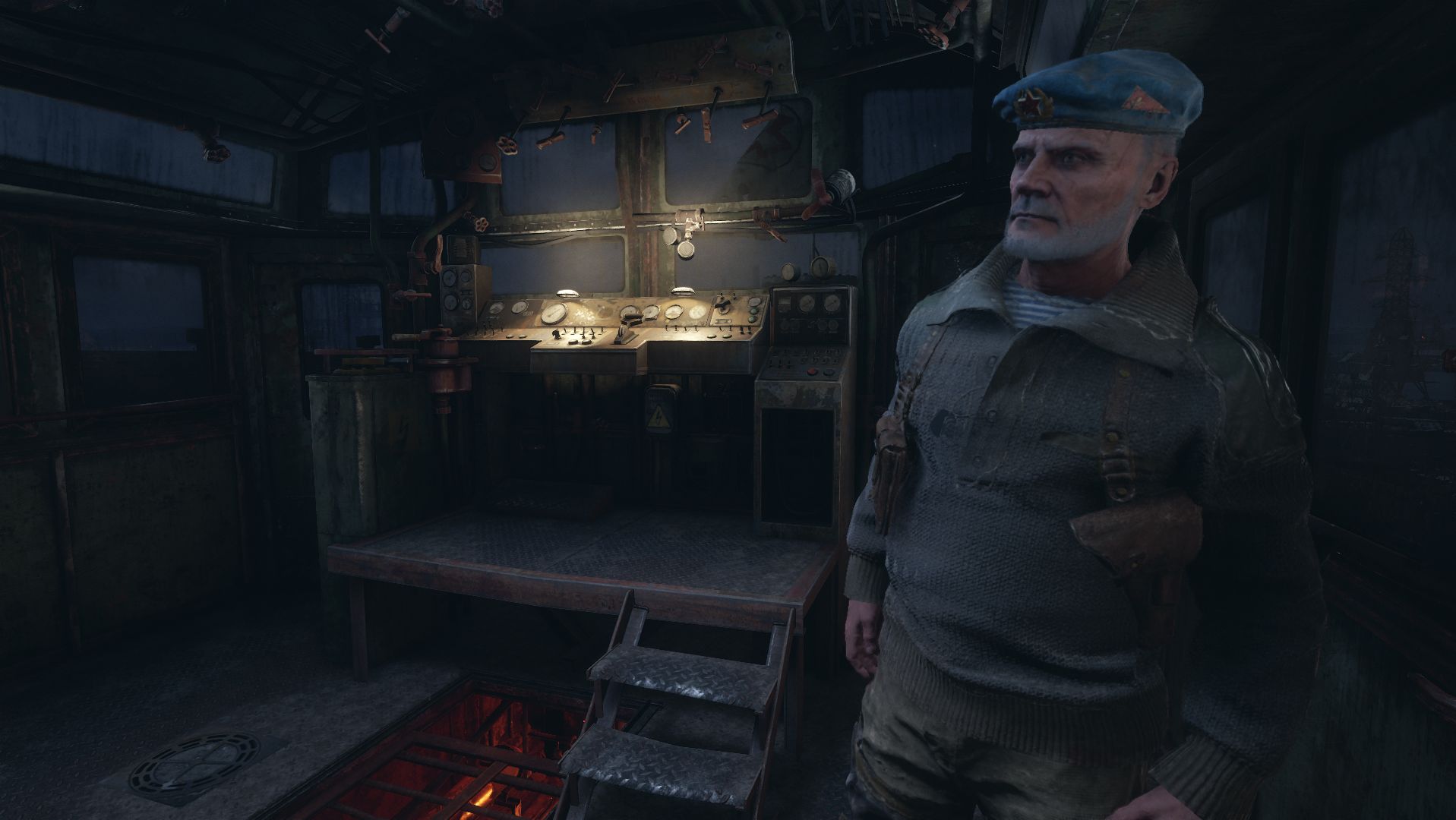 My favourite moment in the introduction comes when Miller drops the bombshell that the war isn’t actually over. Partly as a consequence of timing, partly stiff character models, and partly because Exodus likes to have characters speak over each other, there’s something shonkily artificial about this reveal. The game feels dangerously close to breaking first person long enough for Artyom to slap his own cheek and exclaim to the player that this universe-shattering revelation is, in fact, the spiciest of meatballs.

The games’ charm seems to come from a couple of factors. First is a kind of Eastern European analogue for what we’d probably call ‘Blitz Spirit’ in the UK, and the second is the Russian literary tradition of the ‘Holy Fool’. The result of this is you get stubborn, visionary idiots like Artyom running around, refusing to accept that the world has gone to shit. 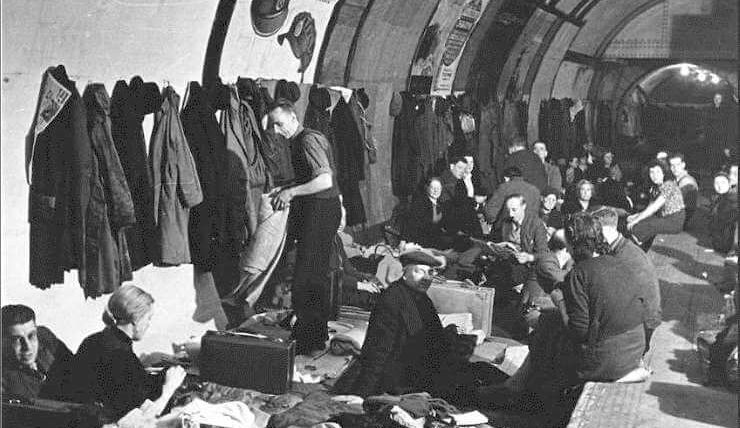 “The Blitz Spirit” is best characterised by historian Angus Calder as a fluffier, pop-the-kettle-on-love-me-arms-have-just-been-blown-off spin on a “grim willingness to carry on” in the face of overwhelming hardship. My survey sample size of exactly one Russian friend that I asked about this confirmed that yes, this a thing in Russia and, no, they don’t know of a specific name for it. I did find these two eerily similar photos of both the London Underground (above) and the Moscow Metro (below) during war-time, though. Also, you’ve played Metro, right? This is definitely a thing. 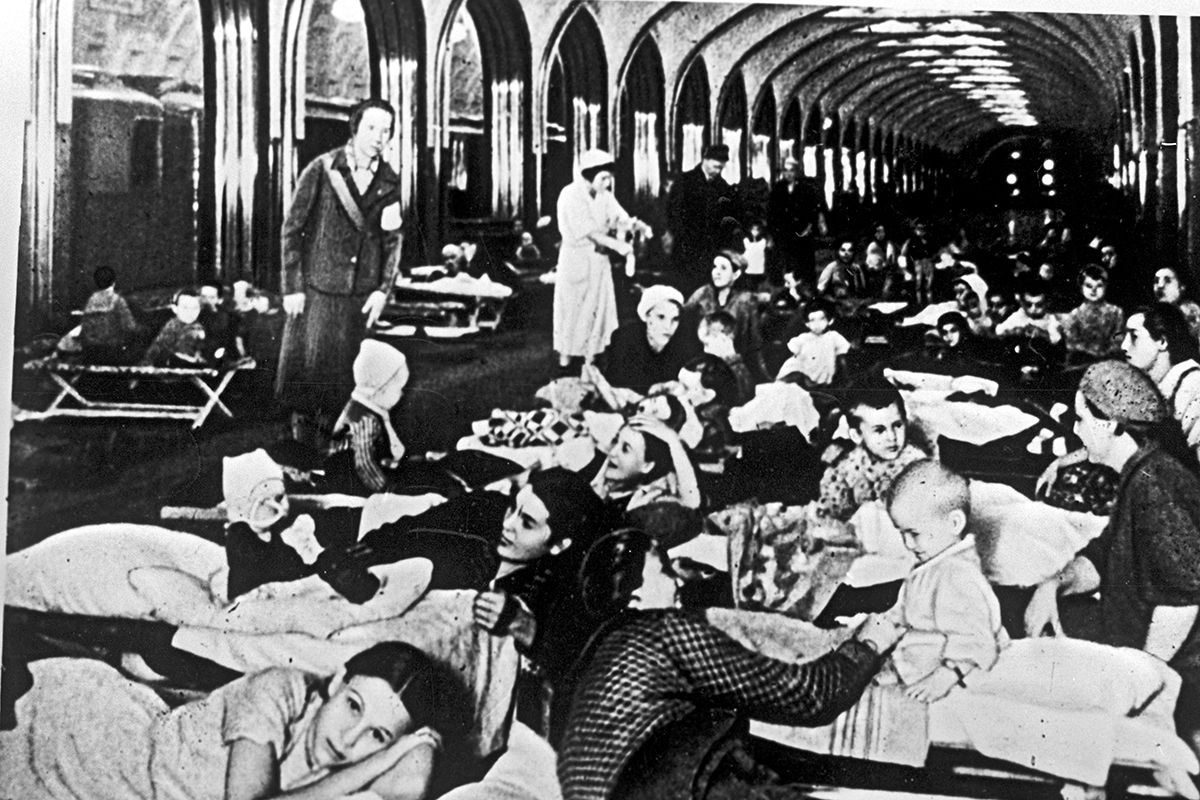 The ‘holy fool’ archetype was a role filled by Khan in the previous two games and inherited by Artyom in Exodus, albeit in a less direct fashion. Artyom’s tale in Exodus is effectively that of a mad visionary who turns out to be right all along and leads a select group of acolytes to a promised land. A type of exodus, if you will.

This combination of grim stoicism and faith in Artyom as a quasi-religious figure grants the Aurora’s crew an iron resolve and an unshakeable sense of good humour. There seems to be no amount of getting spat at by giant lobsters, no amount of battling catfish-worshipping death cults that a battered tin cup of moonshine and a plucked guitar won’t make better. It’s charming. It also ends up reducing the high stakes of the post-apocalypse to a sort of farcical levity. 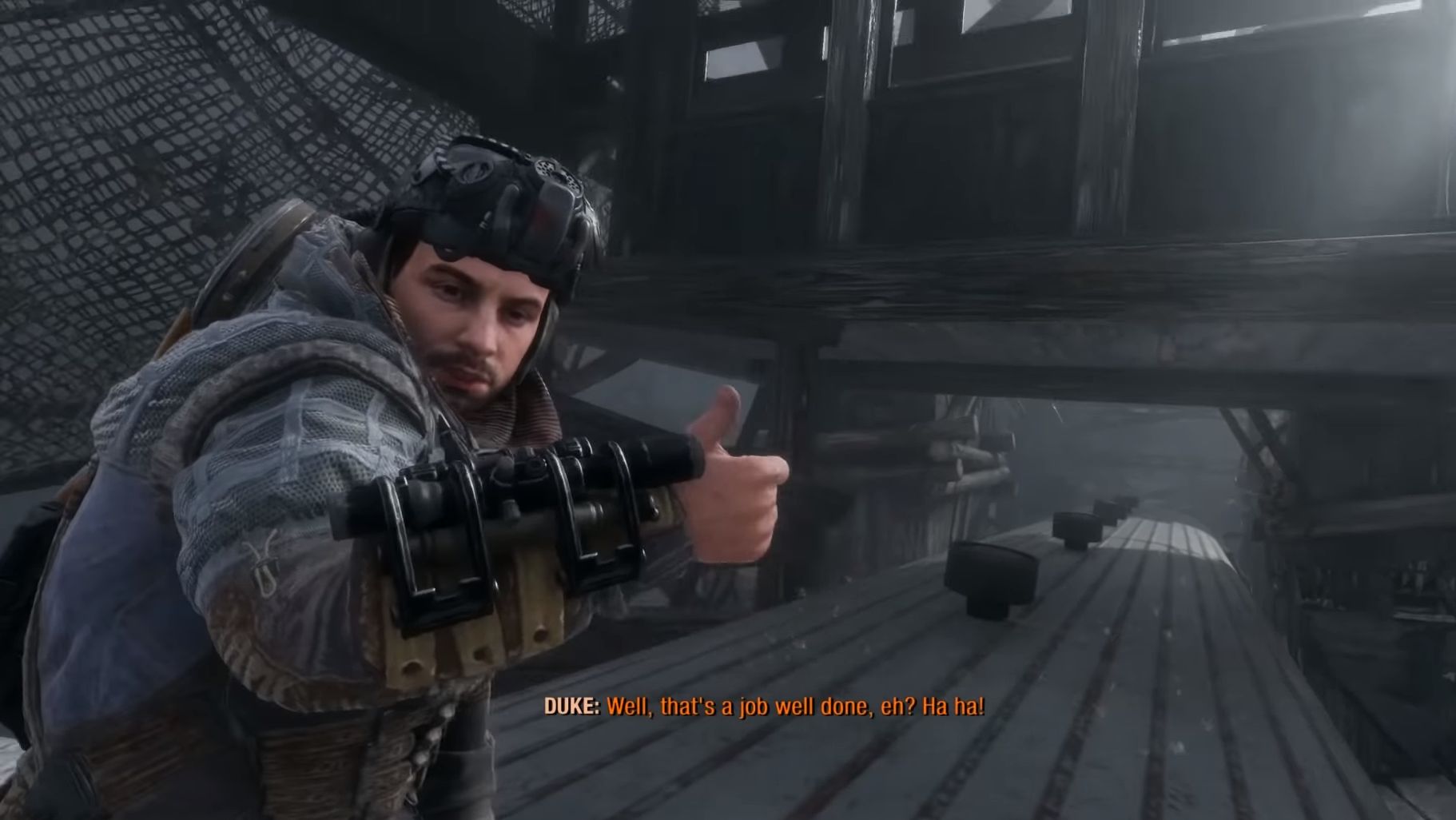 There’s the bit where Duke and Artyom jump onto a speeding train and then Duke gives Artyom a big sweaty thumbs-up. That was radical. There’s the bit where the mutant bear falls off a cliff and the guy with you is chill enough to confess his love to the tree woman a few moments later. Radical. There’s the bit just before you meet the mechanic and get mobbed by not-zombies and then the mechanic goes “Whoa! Those mutants are pretty hardcore, but you just tore right through them!”. I bet Jason Brody would love that bit.

This comes across as Exodus’ attempts to balance out the bleakness of the setting by instilling some heart at the centre, a focal point of camaraderie and warmth. I can get on board with this (this can be a train pun if you want it to be), but I do think it has an artificial quality to it that borders on the self-referential. Every time I was close to feeling isolation, or discomfort, or loneliness, something would happen that suggested that the game was terrified of me not having a rip-roaring adventure. 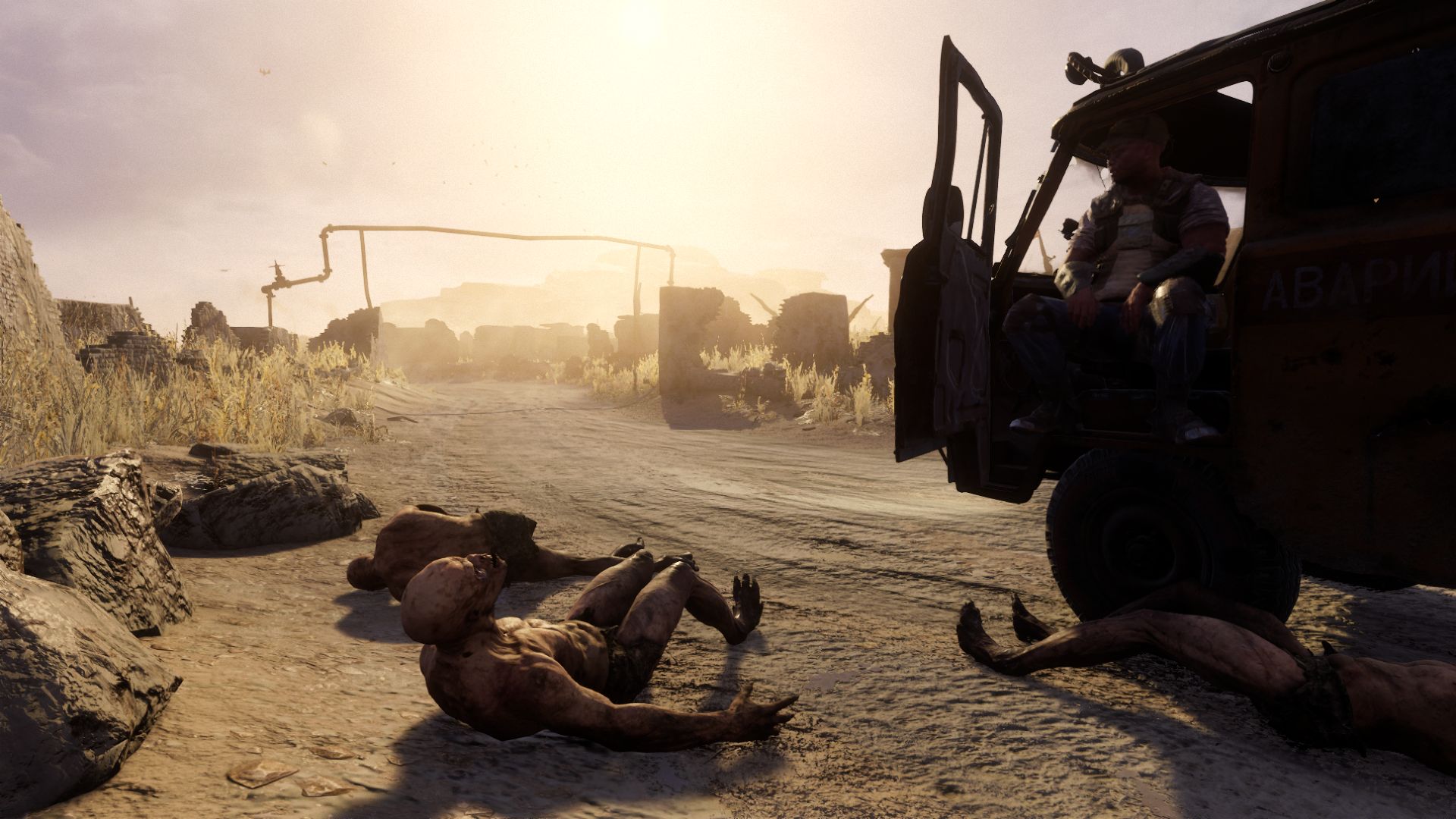 Exodus’ plot, jammed awkwardly between set pieces, didn’t work for me, but I think it failed in a much more interesting way than most games. Both it’s earnestness and artificiality contributed to that campy uncanniness I mentioned earlier, and to paraphrase Susan Sontag, camp is basically incompatible with tragedy. In the process, though, I got a tangible sense of friction between what Metro had been and what Metro expected itself to be to live up to blockbuster status. A sort of unsquashable, poetic weirdness at odds with all the high-octane trailer moments and characters talking about how cool it was to collect loot and make big guns. It was odd enough to stop the game melting into a big grey pile of blockbuster sludge, anyway. So, cheers, Exodus. Hope we can still be chums.