If you click on a link and make a purchase we may receive a small commission. Read our editorial policy.
This is The Mechanic, where Alex Wiltshire invites developers to discuss the difficult journeys they’ve taken to make their games. This time, GNOG [official site].

Samuel Boucher hadn’t really made a game before he started to make GNOG. He was an artist and graphic designer, and though he’d art directed an interactive jigsaw puzzle game for kids, that was pretty much the limit of his experience. So, really, you can say the trouble with GNOG started when he decided to post some illustrations of a game idea he had to a local indie developer forum. His art talents were quite enough to attract the interest of indie studio KO-OP, and so started three years of trying to figure out how to actually make it. “It was a really big mess,“ Boucher tells me.

In its final form, of course, GNOG is a model of hyper-charming visual puzzle game design, in which players interact with giant puzzle-box heads, gain access to their insides and fiddle with their bits and pieces to explore space, give out candies and make cool music. But it took a long time for Boucher and programmer Nick Rudzicz to find it. After all, Boucher’s first idea for the game he wanted to make was a platformer in which players would explore areas gated by giant totems that they’d have to climb into and solve.

“I wanted to make a Limbo-like game,” he says. ”At the time I was playing Limbo and I really wanted to make a platformer that was super-unique and had a lot of strangeness about the world.” And, having joined with KO-OP, he figured that they knew all about how to make games, “and that it was super easy to do all that stuff, that programmers were super-wizards. I didn’t know what skills were needed to make that sort of game.”

So when KO-OP’s studio director, Saleem Dabbous, said the platformer idea was far too big for the small team to take on, Boucher was happy to scale it down and focus on what made everyone excited: the heads. “I just wanted to make a game, so whatever I could modify to make it happen, I would do it. Nothing was scary to me, it was just them being, ‘Oh shit, your idea’s too big!’ OK! I’ll cut all that out.” 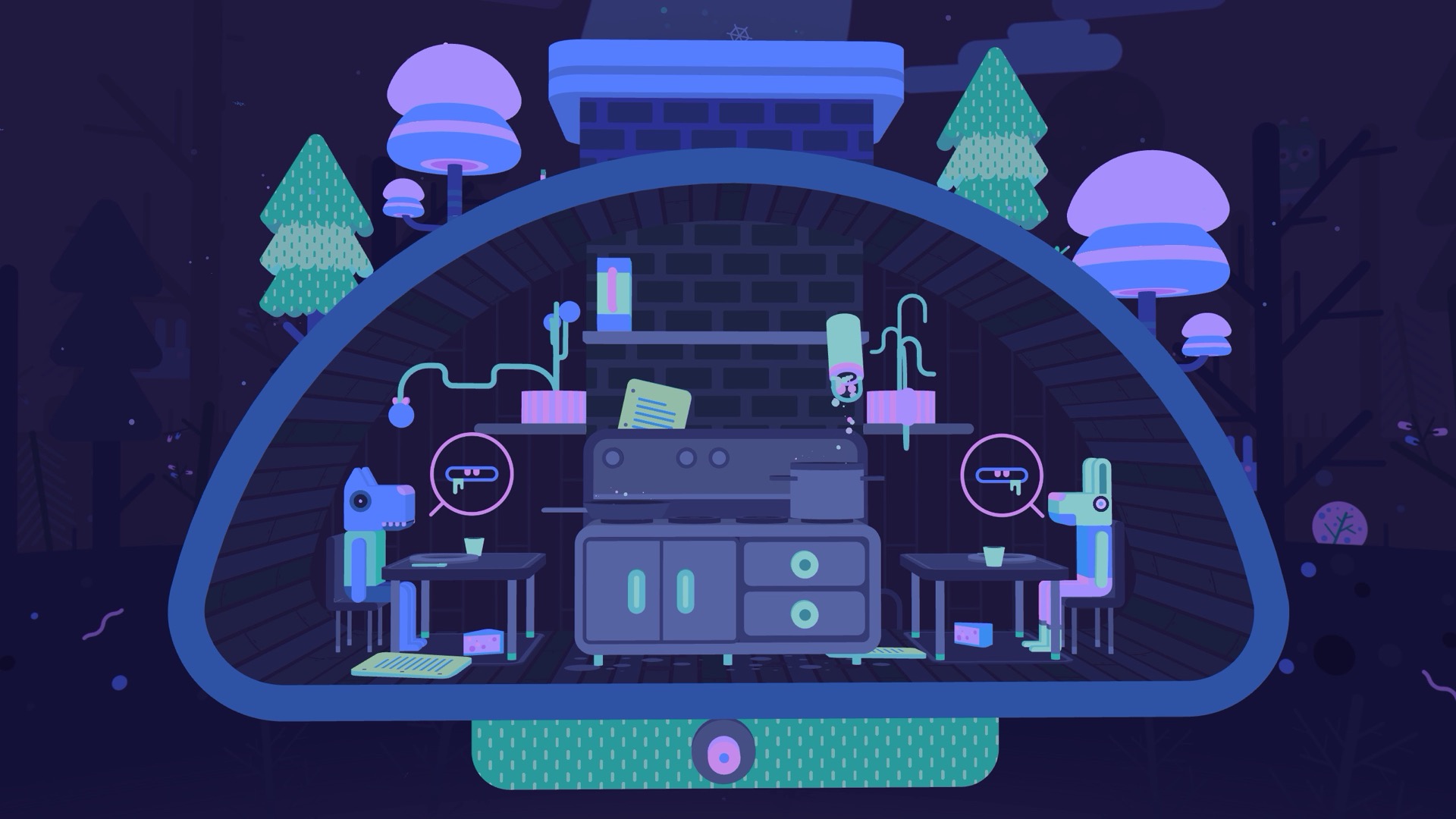 Then Boucher had to tell them that 2D didn’t really work for the game. If the player was going to be interacting with the exteriors of the heads, their flat planes wouldn’t allow enough space to give them things to do. He wanted to add another side to the heads, one which would smoothly rotate, and he knew that wouldn’t look good in 2D. “So I tried to convince them to make it in 3D and everyone was like, ‘Oh no not 3D! This is going to be way too hard!’”

But Boucher, who’d never made anything in 3D before, had been learning the modelling tool SketchUp. “I thought it was really cool because it fitted with my 2D style,” he says, and he proposed making all of the game’s 3D models himself, an offer that the team couldn’t refuse.

But SketchUp brought its own problems. “I think the limited tools that I had in SketchUp worked well with the minimal style I was going for in the 2D art, but still in the end it was challenging,” Boucher says. “SketchUp is weird software.” It’s not designed for making games, so he and programmer Rudzicz had to build their own workflow to channel his work into Unity. Put it this way: when 3D animator Lucie Viatgé joined the team towards the end of development, she had to remodel a lot of Boucher’s work. “It was quite painful.” 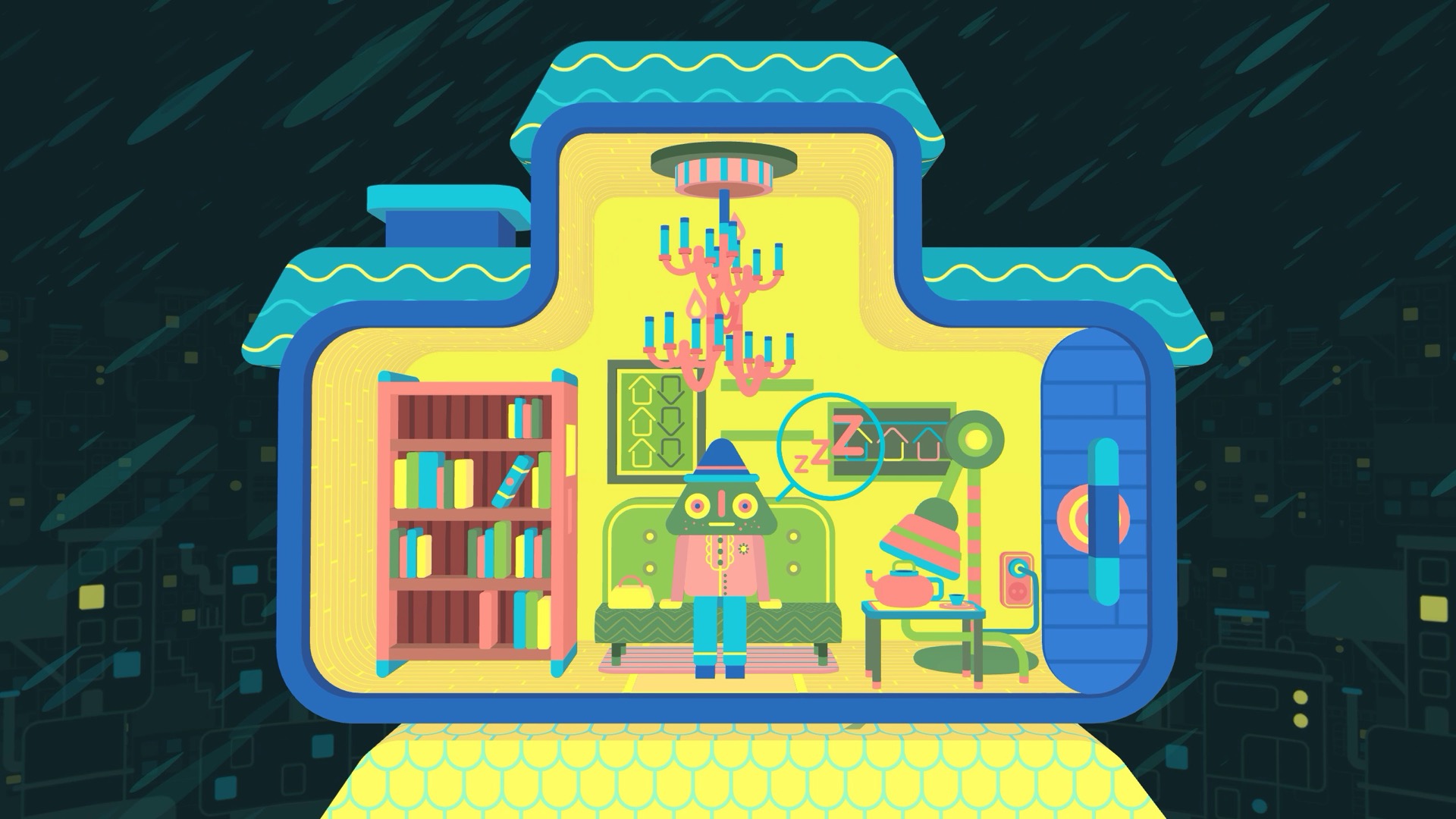 GNOG’s beginnings were filled with these technical hurdles as Boucher encountered the realities of game production and team tried to guide the project around them. After all, Boucher was an artist: he never saw himself having to engage with the technical side. “I didn’t want to use Unity at all, I just wanted to make illustrations and throw ideas to the programmer. I didn’t want to touch Unity, but in the end it was a very different story!” He laughs. “To me, everything seemed very complicated and I didn’t want to learn big new software. I had enough on my plate.”

Now, when Boucher looks back at GNOG’s early days, he sees himself as a backseat driver, coming up with ideas and throwing them at Rudzicz. “‘What if there was a handle there that activates a shower and the character changes?’ I was sending it all to the programmer and saying, ‘Make this work, please?’ And then it was so painful because Nick was just making all that custom stuff all the time and nothing was very reusable and it was like I was dictating from the back seat: move it that way, three pixels left.”

Progress was, therefore, slow. They’d try a design for a puzzle interaction which would entail Rudzicz spending hours creating a set of custom functionality, and then they’d find it didn’t work and he’d have to delete it and make something new. The cost of making changes was a burden on both of them. “I felt like I had no power on stuff at some points,” Boucher says.

But while Boucher describes the whole process as painful, he and Rudzicz were steadily refining what the game was going to be and identified the sliders and turning wheels and buttons that are your core interactions with the heads. And with refining came the chance for Rudzicz to make a set of tools that Boucher could use to implement his ideas himself directly in Unity. Yes, he ended up using it.

It was important to narrow the number of different interactions for the game itself, too. Early playtests showed how players would be overwhelmed by all the objects in view, not knowing what they could interact with. They’d become frustrated when they’d have to search for what worked, and then have to figure out whether that wheel would slide or turn or press in.

”Reducing it to three movements really helped,” says Boucher. “And we made stuff look like what it did, so a wheel rotated and we tried to make all the wheels look the same. Even if people were confused, at least there were just three interactive things they could do.”

KO-OP were quick to show GNOG off. They were a young studio, so they took any chance they could to promote the game, and its development progress became defined by preparing for the next event. “The the painful thing was not having the time and money to make it good,” Boucher says. When they took it to the Indie Megabooth in 2014, for example, Boucher was well aware of the build’s problems and had to bear the pain of watching players encountering them. “When you know that you didn’t have enough time to work on it and you show it, that’s really difficult. But the cool thing is that everyone responded really well to the visuals and the concept.”

Steadily, the game was built. But more had to be thrown away, the most significant for Boucher being multi-level heads. He’d envisaged stages where play would move from one head to others in a succession. So in what became FRG-Y, the game’s first level, in which you lure a frog off a bed with a butterfly, the camera would then swoop down under the bed, through a tunnel and there’d be a bug-GNOG to play with before the action returned to the bedroom.

Similarly, in SUB-01, in which you operate a submarine, you’d go down into the ocean and meet a whale-GNOG, return to the sub, and then encounter a jellyfish-GNOG. “I think the ultimate GNOG game would have been the multi-head levels, because it was super cool and we could have really explored fully what the game could be,” Boucher says.

But KO-OP was already having to take on contract work in order to continue GNOG’s development, and extra complexity might have scuppered the whole thing. As it was, a head was taking two months to complete. “We really wanted to release the game so everything that seemed too ambitious, we cut it.”

The heads that made the final game are the result of a rigorous process of decapitation the team carried out to rein the project in. Boucher had amassed 50 ideas - ”there was a windmill-GNOG and a suitcase-GNOG, an organ-GNOG” - and the team voted on which would work best as narrative ideas with the puzzle ideas they had. VORT-X was easy: you could interact with a pilot who’d control the ship and another could get out, and there could be planets to play with. 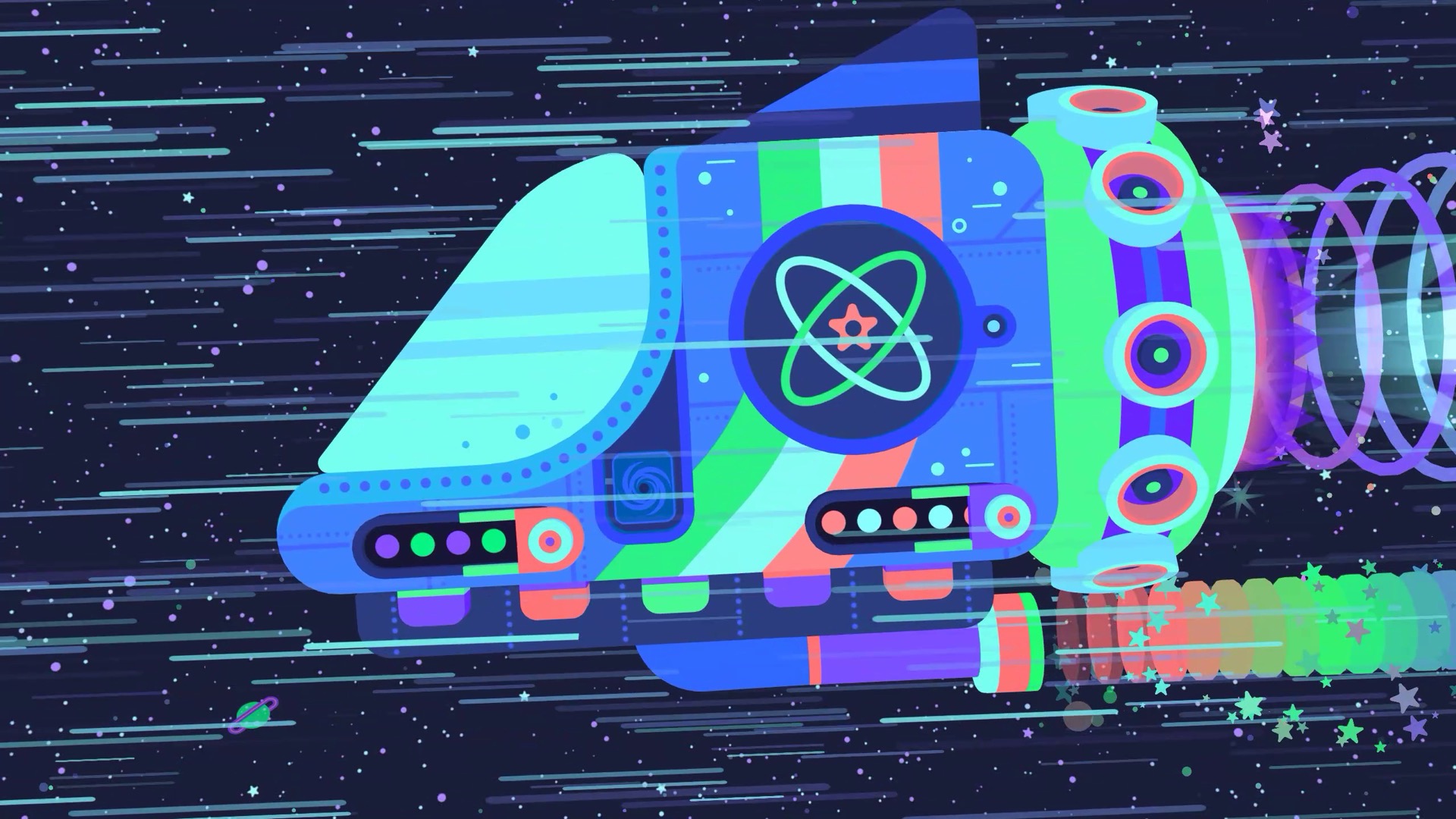 “But something like the suitcase, we liked the idea but no one could ever really tell what the narrative thread would be and what the interactives would be. It was a bit too abstract.” While Boucher liked abstractness, he’d long since realised that it would cause players to fail to understand what to do. But everyone has an idea for what they might do in a spaceship.

“I think the bedroom [FRG-Y] is still a bit abstract because it was the first level and for some reason we always wanted to keep it. It’s the most abstract in the whole game. Overall not everything is super-literal, but I think we could have pushed it further. In the end, GNOG is way more story-based and people can figure out better what the puzzles are.”

And in the same way, in the end, GNOG is the focused game it is today because of all the necessary cuts it was given over its development. ”It was our first game, and we wanted to show people we could do it,” says Boucher. “I’m not too sad about them.”