This is The Mechanic, where Alex Wiltshire invites developers to discuss the difficult journeys they’ve taken to make their games. This time, Far: Lone Sails [official site].

It’s there when you first start the engine, in the hiss of steam as you press the ignition button and the rumble as the great wheels begin to turn. Then the music swells and you know the journey has begun.

Far: Lone Sails is a game by Okomotive about piloting a giant land boat across a destroyed landscape, about tending a huge machine through unpropitious conditions: hail and storms, fires, failure and shortages of fuel. And a great deal of your understanding of its colossal workings comes through sound, with music which responds to your actions and many layers of looping sound effects which subtly change shape as you trundle through a vast wilderness.

It wasn’t always this way. In fact, it wasn’t until August last year, only eight months before Far: Lone Sails launched, that its soundscapes became as dynamic as they are in the finished game. Until then, composer Joel Schoch had been working to the builds of the game that creative lead Don Schmocker and tech lead Goran Saric fed them to him, creating linear soundtracks for the way he played. But a lot of change was to come.

Far, after all, is product of rather serendipitous development. It began as part of Schmocker’s BA in game design at Zurich University of the Arts, and then further evolved during his and Saric’s Masters. It wasn’t until they got funding and could formally hire a team that composer Schoch went full-time and was joined by programmer and sound designer Fabio Baumgartner, who jumped in to hurriedly put sound into a build for Gamescom. 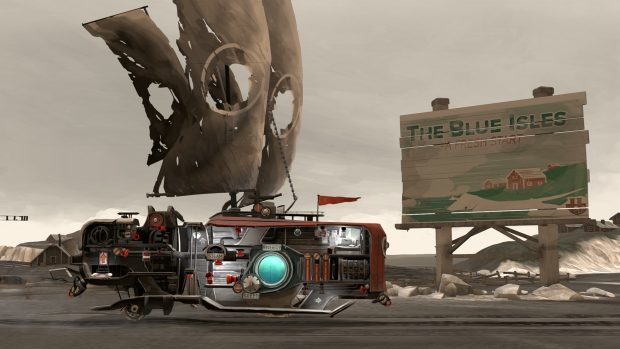 The first thing they did was to break down what players could do in the game, such as getting into the vehicle, driving it and stopping, and to figure out how the music would reflect these events and how the game would make them interactive.

Take the first sequence, in which you find the vehicle and start its engine. It’s a significant moment, emotional since it’s the start of the relationship that defines the entire game, and practical since it needs to teach you how to get this huge beast moving. In a game with no tutorial other than prompts to explain the controls, Far leans on sound effects and music to deliver the vital feedback that helps you learn to play.

“When it was first composed, the music was a pretty linear piece with a build-up that started when you first hit the button to start the engine,” says Baumgartner. But he and Schoch knew that since it was a fixed track, there would always be a disconnection between what they wanted the player to feel and what they’d actually be feeling. The music had to react as players slowed down, stopped and started the vehicle to properly relate the emotion of driving it.

In the final game, that first sequence is composed of several different tracks which are fixed to states. The first is a looping piece which starts playing when the player gets close to the vehicle. Its sporadic plucks emphasise an expectant silence that builds as you enter the vehicle and look around, investigating its different floors, rooms and buttons.

Then, once you figure out how to start the vehicle, causing an explosion of hissing steam and clattering, the music switches to a new track, a rhythmic and exultant piece which mirrors your sense of achievement in getting the machine going. This one doesn’t loop because it’s long enough that the player will have crossed the area by the time it ends, whereupon the game switches to an outro piece. However, if you stop the engine before you get there, a guitar strum will play and the soundtrack will switch to a new loop, one which echoes the in-motion one but is far quieter and creates a sustained sense of waiting to get going again.

All this is enabled by FMOD, a leading game audio management system. “It’s an amazing program, to be honest,” says Schoch, who had previously made music that looped and reacted to theatre performances, but hadn’t used any software like it for games. FMOD allows he and Baumgartner to fill the world with trigger points and define parameters and rules that mould and adapt layers of sound so the audio smoothly responds to what you’re doing.

As much as it’s dynamically sequenced, though, Far’s music is not electronic. “I think from day one it was clear to me that I wanted to record everything with real humans and real human emotions because it felt like the right way to go,” says Schoch. All the music was played by a group of friend musicians playing saxophone, trumpet, cello, violin, double bass, guitar and mandolin, and he recorded them in his room. “In my little Zurich home studio. Actually, I’d rather record in my room because musicians are a bit more relaxed in this mess, rather than in a really tidy studio with all the equipment. It has a big influence on how musicians play.”

The music is only part of Far’s auditory landscape, of course. Schoch and Baumgartner applied the same principles to sound effects, changing the balance of engine and weather effects as you go outside the vehicle during a storm. But the most complex sound system is the one that governs the engine, which is set by eight different parameters.

One sets the tempo of the engine, and another runs an engine shut-down effect. There’s something they call ‘startup boost’ which makes the engine relatively loud when you first fire it up, and then gradually quietens it, a scheme that gives you immediate feedback that you’ve successfully gotten the engine going, but then fades into the background enough that you can hear other things that are going on. Then there’s a layer of sound for when steam builds up and for when you release it and the engine surges. There’s a damage parameter, which can create a hiccup on starting the engine, and one which changes the balance of the sounds depending on whether you’re inside or outside the vehicle. 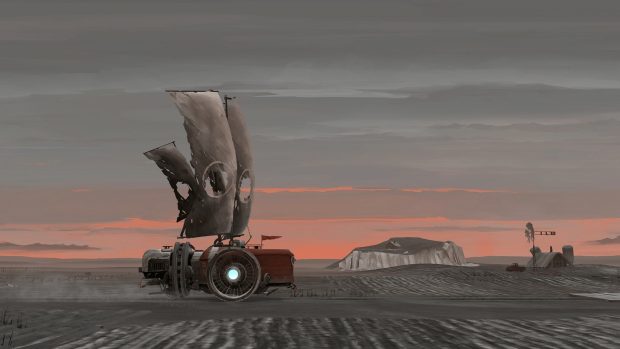 And there are many other layers, of looping rattles and cycling gears which on their own make little sense. “The rattling gives the vehicle a little bit of soul,” says Baumgartner, explaining that as you go faster it raises in pitch. Other elements of the engine can get louder. “The key for a good sound design is to have stuff react in a similar way but not exactly the same,” says Schoch.

The thing that ensures all these many components work together harmoniously, so they all sound like they’re coming out of the same world, is convolution reverb. This is a sound design principle based on the idea that you can build a profile of a given space by sending out a sound signal inside it and then recording it. By applying the difference between the original and the recording to an effect, it’ll sound as if it happened there. Schoch and Baumgartner didn’t go out and measure real places, but they did apply specific profiles to sound effects, including those based on a large metal-lined room and a smaller wood-constructed one, so every space feels distinct and yet coherent. 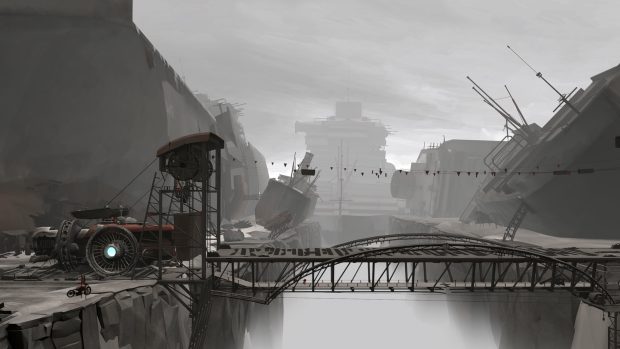 “And a big part of it was to test the game,” says Schoch. “You can hear if a sound is off, and then you go back and craft it with these sliders, add a bit more reverb, and equalisation is important, to put it into a place that feels right. It’s hard to describe what feels right, but that’s what we did.”

“Other things that help are using certain components of sounds repeatedly,” says Baumgartner. To increase the impact of certain sounds he used recordings of a taiko drum, giving a consistency that runs across the whole game. “Stuff like this really helps to give coherent sound, but really it’s a lot of back and forth and trial and error.”

In short, it was a lot of work in a short amount of time, but Far’s sound design somehow avoids betraying the truth that the team was learning how to make it as they went along. “It was the first time we did a project like this, so a lot of the methods we use now we developed in the last couple of months,” says Baumgartner. And it worked. Far’s sound is a huge part of the game, providing a great deal of the sense of driving its large land boat through desolate landscapes, and underscoring the beautiful loneliness of the journey.

By the way, you can listen to Joel Schoch's wonderful soundtrack for Far: Lone Sails on Apple Music and Spotify.