Chances are you’ve caught wind of Minit between its initial release and the clamor for a Switch port. It’s a wee, wonderful, one-bit adventure where, thanks to a cursed blade, you die every 60 seconds. While it’s a romping hoot of a game, it also blatantly wastes your time. I mean that in a good way: Minit tosses away precious seconds with so many fun, sincere, and clever tactics that this shines as a pro, not a con.

The earliest example appears minutes into Minit. Near a lighthouse, you come across a dastardly old codger who talks at a snail’s pace. You listen for 20 seconds before realising a third of your life has gone up in smoke. Moving on, you slot a key into the lighthouse door and venture inside -- only to discover a ladder whose length rivals the one found near the end of Metal Gear Solid 3: Snake Eater. The one-two-punch of “slow, kindly geezer” and “pierce-the-heavens ladder” is a joke: you’ve laser-focused on speed-running Minit, and let your guard down whilst it pushed you between a rock and a hard place. You can come back with a fresh life and do one or the other, but not both. You certainly can’t do either now. Your only solution is to die where you stand.

“Sometimes they’re not really puzzles, and sometimes they’re not really hard,” says Jan Willem Nijman, who did a lot of the coding and design for Minit. “That was super intentional because we knew the time limit would add enough to make even a simple maze fun and a little bit exciting. Just because there’s this clock ticking down! Or even talking to an old man who speaks very slowly, that can be tense and exciting. It was a way to let us make a game that was way friendlier and more accessible.” 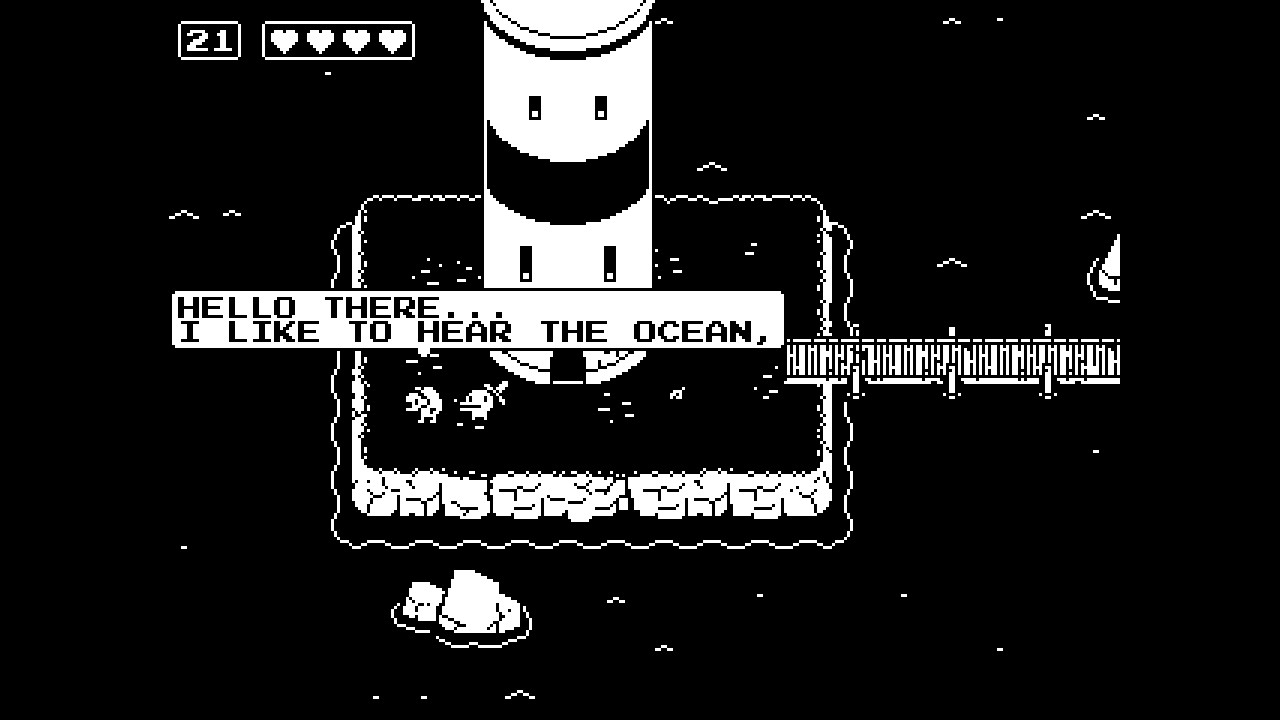 Minit contains many moments that deliberately run down the clock, throw the player off course, or otherwise distract. From a creature in a box who’s lost its wallet, to a house with a never-ending staircase, most everything serves this wasteful purpose. While it’s true that some may take multiple lives to figure out, each is so off-the-wall and different that they feel less like annoyances and more like the punchline to obscure tweets. Both developers say that Twitter’s absurd genes found their way into Minit, albeit in the smallest manner.

But for all the side-tracked knick-knacks, out-of-the-way secrets, and lengthy conversations, none devour as much time as the hero’s sword. It takes a comically brutal length of time to heft around when compared to other top-down adventures. Combat feels like a waste of time in and of itself, adding to the series of split-second decisions. For example, a cave swarming with snakes presents two scenarios: is it quicker to kill the snakes, or to run around them? To an extent, this was intentional.

“The sword is really important to the game, but it’s not a game about combat,” Nijman says. “While it should feel fun to fight enemies, we also wanted it to be a little tricky to fight enemies. We just didn’t want it to be kind of a badass sword RPG where you go and kill demons, or something. Hopefully that shows in how the combat is a little bit… clumsy, maybe?” 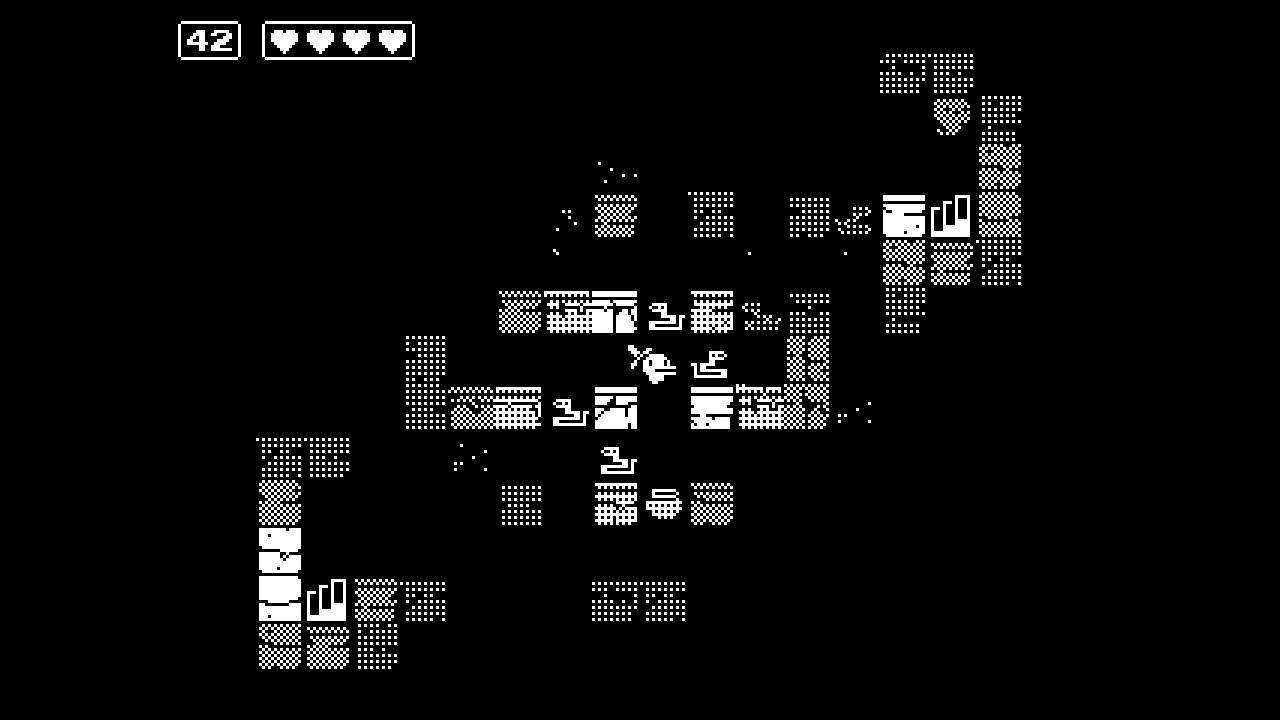 “I mean yeah, I guess it’s a little clumsy,” adds Kitty Calis. Calis created Minit’s art alongside Dominik Johann and worked on its general design. “But I feel all the animations in the world add to the world itself.” She recounts multiple examples of small tidbits that were quickly and easily added to flesh out the world. For example, a ten-track jukebox soundtrack (with sound design by Jukio Callio), a submarine scene, and a tiny annoying mosquito were all created in less than a day. In her opinion, these add to Minit’s overall charm. Without this charm, this humor and playful exploration, that time-squandering death-loop would feel much more like a slap in the face.

But still, many of these scenarios could easily have grown infuriating after multiple failed attempts or close-calls. Minit required some fine-tuning in order to stay fresh and pull off these distractions and life-destroyers. They skirt this line by staying quick -- none overstay their welcome, so none ever get the chance to enrage.

Calis remarks that the hard-coded time-limit worked wonders here, as it helped them hop into players’ shoes: they knew exactly how far people could go with a single life, which let them play with expectations and routing. Nijman says that the team’s own abhorrence for static time limits inspired them to find fun ways to bounce around possibly angering situations. Most puzzles consume seconds while also entertaining you, knowing that you’ll easily solve them on the next respawn. 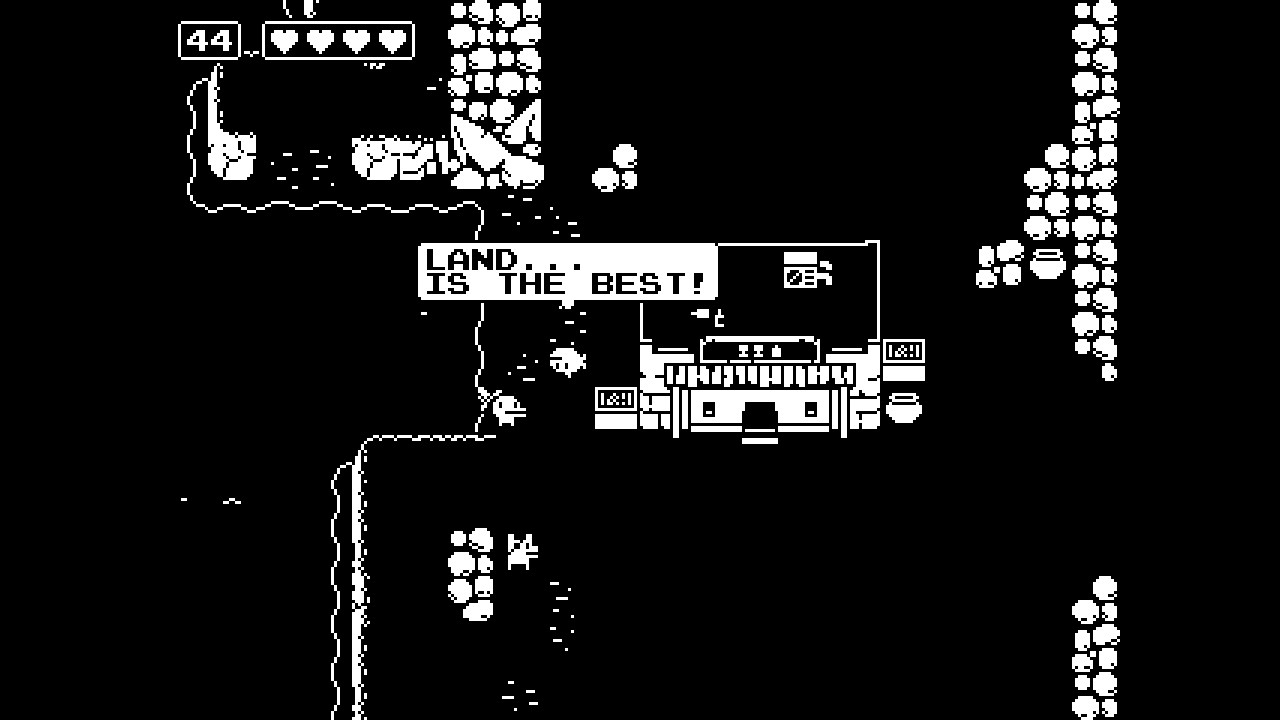 “Everything was kind of designed with the cycle in mind,” Nijman remarks. “You explore, you find something, and then you solve it. That could be maybe three runs, but while you’re going there, every screen in the game has a secret -- has something hidden or a puzzle or a cute detail. So while you’re exploring the list of things you can solve, the list of things you want to try grows.”

This detail-oriented world was another result of careful tweaking. Calis and Nijman both state that after development, they pored over every map screen to ensure there was something fun and new on every last one. “We wanted every single screen to be filled with something,” Calis says. “If you’re playing through and haven’t found something on a certain screen yet, you know there’s something to be found.”

Minit is allowed to eat players’ time because it does so in a respectful, thoughtful way. Sure, you may have lost the 37 seconds you need to run to the desert oasis, but in theory, you didn’t lose 37 seconds. You simply found them in equally interesting details. Perhaps this was in a bullfight, a snake-filled cave, or a thirsty stranger. Or perhaps it was in a rickety senior citizen and a hellish ladder. Whatever the case, Minit and its developers ensure that “wasting time” is synonymous with “fun”.

“Our theory was that if we have fun while making the game, it’ll show in the product,” Nijman states. “I think it worked out well.”