This is The Mechanic, where Alex Wiltshire invites developers to discuss the difficult journeys they’ve taken to make their games. This time, Ghost Of A Tale [official site].

Every time I see Ghost Of A Tale I’m taken aback by its beauty. Its world of cracked flagstones, knurled furniture, twisting passages, haphazard towers and lush vegetation looks like it’s truly lived in by its population of woodland creatures; by authoritarian rats, scurrying criminal mice and pirate frogs.

All that detail lends Ghost Of A Tale the feel that it’s the product of a large studio, of a team of artists leaning on years of experience. But it wasn’t. Ghost Of A Tale’s world was made, fundamentally, by just one person. One person, in fact, who’d never even made a game before. Lionel ‘Seith’ Gallatt created every texture, level layout and model, animated them and did a great deal of the programming that underpins it all. Not bad for someone who’d previously been Despicable Me’s animation director.

Before he decided to make an extraordinarily ambitious woodland mammal take on Dark Souls, Gallatt was an animator for Dreamworks, where he started out drawing traditional hand-drawn animation for Prince of Egypt and Road to Eldorado, before moving on to 3D CG for Shark Tale and then directing all of the animation for Despicable Me and The Lorax.

But he wanted to make games. In his spare time he was messing around in CryEngine because he liked the visuals it could generate. “But it was just hobby stuff and at one point I decided it was too complicated, that I’d need a small team of coders and specialists,” he tells me. But just as he was ready to give up, someone told him that Unity was easier to use. This was 2013, right around the release of Unity 4, which featured DirectX 11 integration and the powerful new graphical features that came with it, including tessellation.

Tessellation, a graphical technique which can pop a flat polygon into intricate and credible shape, was just the kind of tech that chimed with Gallatt’s sensibilities for visual fidelity, so he started to explore Unity. “When I was fairly confident that I could manage and do it on my own, coding and texturing and lighting and animating and everything that was involved, that’s when I did the crowdfunding campaign.” And he also jacked in his job.

After five years in development and a spell in Early Access, Ghost Of A Tale was officially released in March, and it was made by a team of just Gallatt, writer and designer Paul Gardner and programmer Cyrille Paulhiac, who made the tools that streamlined production. But what helped enormously was that the world of game dev was surprisingly close to the CG one he’d left. “The talent required, the way of thinking, the artistic stuff and tools, it’s exactly the same, it’s just that the end goal is different,” Gallatt says. “I felt at home using Maya and Zbrush, it felt really nice and that was a way to justify spending more time learning this stuff.” 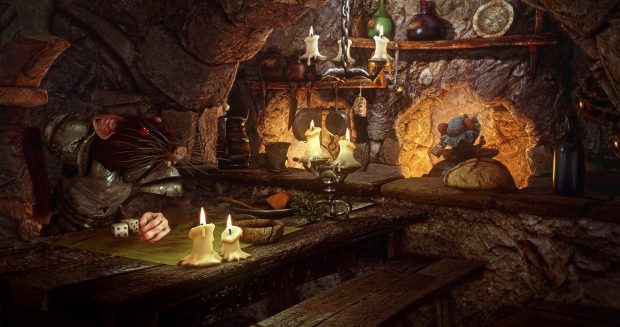 And since he knew what went into making a CG movie, Gallatt also had a very good idea of what it’d take to make a game with the production values he wanted. “Unfortunately. That was a bit scary at first.” But that experience meant that despite Ghost Of A Tale’s apparent art excess, it’s a product of pragmatism. “I was ready to compromise. I was very aware that I could not create something that was completely to Hollywood standards.”

Gallatt started out quite conservative in what he expected to be able to create, but as his knowledge of how to make games increased, he raised the quality bar over the course of Ghost Of A Tale’s development. He added volumetric lighting, which enabled all kinds of atmospheric effects. “You get a sense of depth and something in the atmosphere, not just crisp and digital and cold. I wanted something softer, more painterly, a bit more like a picture.” God rays, which were previously a post-processing effect which meant that if the sun wasn’t in the frame they wouldn’t be drawn, suddenly behaved correctly, shining through windows. 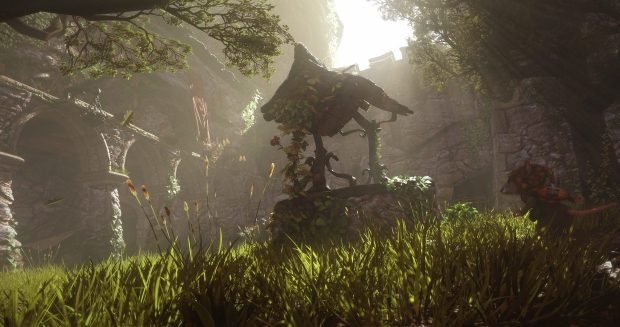 And then there was dynamic vegetation. Gallatt has strong feelings about vegetation in games, pointing his finger at games like God of War, which are stunning to look at until you notice that gruff old Kratos doesn’t interact with the plants he thumps through. “It always bothered me because when you get to such a level of quality you want to be able to go in there and feel that the main character is there in this environment,” Gallatt says. Alternatively, in games like Horizon: Zero Dawn, Aloy does interact with vegetation, but only through a shader effect based on collision detection. “It’s this sphere or capsule collision detection and it pushes away things around the colliders like a bubble moving through grass. I hate that. I don’t like that. It just doesn’t look nice.”

Determined to make Tilo, Ghost Of A Tale’s mouse player character, look like he’s truly situated in the world, he and Paulhiac created their own physics-driven system which gives vegetation bones and joints so they’d react to Tilo’s body. But since the world is filled with vegetation, they had to ensure it wouldn’t kill the game’s performance, so they made it show distant ferns and other plants as static meshes which are deformed with simple vertex animation so they appear to sway in the wind. Then, as Tilo nears them, they’re swapped for physicalised ones. At any time, there will be 20 to 50 dynamic pieces of vegetation, all close by. “It’s just the philosophy of whatever is around Tilo needs to be very high quality and everything that’s further way, you don’t care.”

He’s pretty proud of what they were able to come up with, especially as so few big-budget games feature this kind of attention to detail. “It took a little bit of iteration but it actually works, so there’s really no excuse for AAA studios not to have dynamic vegetation. It should work. It does work!”

For the world itself, Gallatt used development-typical ways of blocking a new environment out with untextured polygons to get a feel for how it worked. He wanted the world to feel real, with spaces that felt like the sets he’d work with when he was creating CG movies. “In the jail [at the start of the game] the length of the walls and their angles are not clean, they’re not perfect, and it’s so it feels underground and organic and weird.” He visited castles and ruins, getting a feel for the roughness of their stone, their shape and scale. Ghost Of A Tale deals with scale in an interesting way, dodging that typical gamey thing where rooms are too big, so you don’t continually crash into furniture, with the fact that Tilo is a mouse in a world of larger rats. Everything really is too big for him. 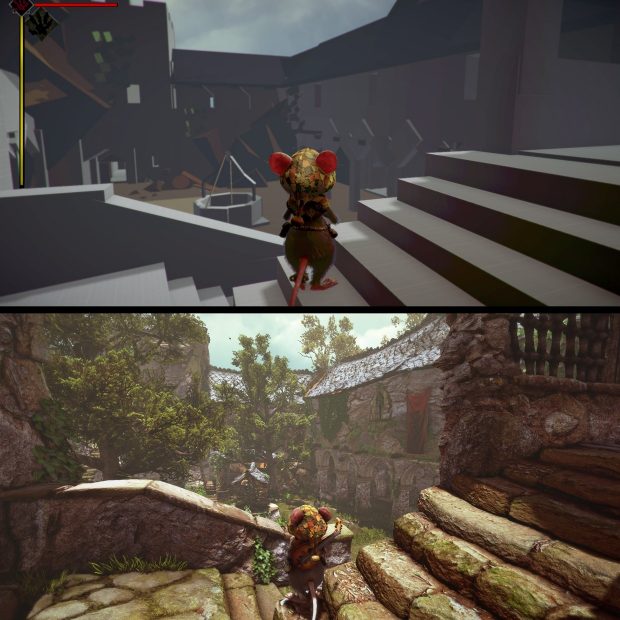 The texturing stage was sometimes simple: “Almost as easy as slapping a texture on a wall,” Gallatt says. “Since I was using tessellation, I could sometimes use it on a simple flat piece of geometry and the richness of the hues of the texture and the tessellation gave enough information that I didn’t need to do too many things, because then it almost becomes unreadable and that’s another problem.”

But at the same time, he regrets his inexperience at the start of the project, because he was pulling across the way Dreamworks would design a set for CG out of unique objects. He learned that games are better made of modular pieces that are endlessly reconfigured, with walls and roofs that are reused, a philosophy that improves game performance as well makes it more efficient to produce. “But the fact that I didn’t have modular stuff helped to have a very organic-feeling layout,” he concedes. 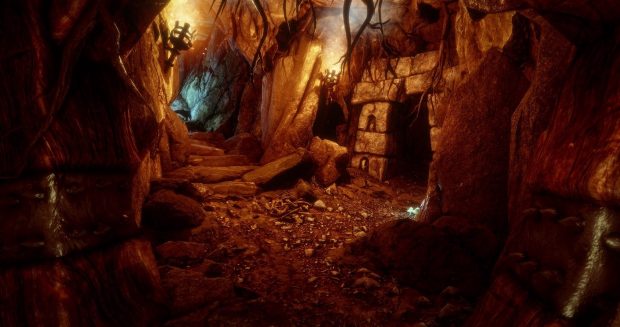 And at every stage he’d drop into the game, walking around the half-made environment and looking at everything. “I stop every time I see something wrong, fix it, then go back into the game. I do that for everything and for me that’s the only way to come up with something that holds up pretty well in most situations.”

And so one of the very first things Gallatt did for Ghost Of A Tale was to create Tilo himself. That’s probably something you’d expect an animator to do for their first game, an easy way in. But it was really so he could run and walk around the levels, to make that fundament of the game enjoyable because Tilo - and the camera - are the window through which players experience the world he was going to be creating. ”The irony is that I spent very little time animating things in the game,” he says. “I didn’t want to get precious about it, or to get dragged into everything needing to be perfect. So yeah, it’s ironic but I did what I think is sometimes the bare minimum. Sometimes a bit nicer than that.”