Like most kids who grew up playing video games, I didn’t want my adventures to stop when the screen turned off. As I raced down the road on my bike or zoned out in the backseat during long drives, I’d imagine what my favorite characters would look like superimposed onto the world around me, how they’d run along the telephone lines or dart between the trees. Playing the demo for Tala felt like those childhood musings brought to life.

This point-and-click adventure from "micro" game studio The Garden Well transforms nature photography into an interactive forest floor populated by a colorful cast of woodland sprites, with everything from their mushroom homes to their matchstick garden boxes traditionally animated by its sole developer, Matthew Petrak. It’s aiming for a mid-2019 release, he says, depending on the success of Tala’s recently launched Kickstarter [Edit: the Kickstarter fell short a day ago].

You play as the titular Tala, a forest spirit tasked with watching over her pastoral village while its leader journeys farther into the woods to gather food. But it’s not long before news arrives that the Town Guardian’s become stranded on their quest. A busted plane in town could hold the solution to his rescue, but Tala will need to coax help from her neighbors (using typical roundabout, puzzle game logic, of course) if they want any hope of surviving the winter.

Petrak, an Australia-based artist and animator, began the project as an art study in 2015, and the game’s distinctive style grew in part out of pragmatism. As its only developer, Petrak knew he had to play to his strengths. Creating background art, he admitted, was not one of them, but from this concession he began experimenting with live photography.

And the subject matter was easy enough to incorporate into his off time; any excuse to ditch the computer screen for the gorgeous national parks of Victoria. Snapping countless pictures along the way, he discovered future corners of Tala’s microcosm at sites like Wilsons Promontory, the Grampians and the Dandenong Ranges.

“There’s a group of local gamedev friends that go out for hikes whenever we find the opportunity,” Petrak says. “We all spend too much time staring at our computers, and spending a day out in the fresh air surrounded by ancient trees is always revitalizing. It just so happens that I can use these hikes as an excuse to also get some work done!”

As for what shots he goes for, well, that – like most of the creative work in Petrak’s game – is done by eye. Sometimes he stumbles across the perfect spot. While hiking the Grampians, he spotted the pile of rocks in the video below by complete accident, a cairn constructed by fellow hikers off the park’s main trails.

“If I'm out somewhere and find a vaguely interesting looking formation, I'll drop everything and take a photo (or twelve),” Petrak wrote on his Kickstarter.

While he can terraform a photo into an in-game background in as little as an hour, the process of fine-tuning each frame’s focus, shading, and color-grading so that it blends seamlessly into Tala’s world is a time-intensive ordeal, and one that never feels quite finished, he says.

Petrak first blurs any obtrusive foliage or the stray splotch of color before separating the focal points and the background into discrete layers. He blurs the background to limit the player’s field of view and pull focus to interactive objects. The background also shuffles slightly when the camera pans with the player, making Tala’s movements feel more entrenched in her environment, adding to the ambiance of a stroll along the forest floor. 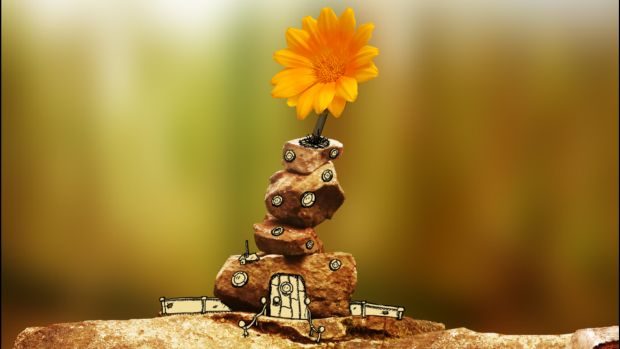 Then he sets to work establishing a color palette, which helps unite the otherwise random images of foliage. By manipulating lighting and coloring, he can highlight details in the scenery that will direct player movement, such as where he plans to place a railing or path. After all this, he draws Tala’s world onto the scenery, which he does freehand using first a pencil brush for the rough outline followed by a custom brush for the final pass.

From Petrak’s professional experience, he knew cleaning up the game’s traditional animation would eat up a lot of the game’s production time, so he opted for a messier art style that allowed for the sketchier layers to bleed through. Attempting a realistic style would have stretched the work into an unmanageable amount, and he found that the hand-drawn look also helped his project stand out.

“I’ve always been a proponent for strong art direction … and it’s a way for me to explore eye-catching art styles that aren’t typically seen in games,” he says.

And if Tala’s sketchy style gives you Machinarium vibes, that’s no coincidence: Petrak cited its developer, Amanita Design, as a key source of inspiration.

“The Samorost series specifically paved the way in showing me that games like this are possible,” he says.

Similar to Tala’s art style, the decision to make in-game communication exclusively non-verbal came from both a place of creative license and necessity. This also would allow non-English speakers to enjoy his game, eliminating the need for translations or subtitles. Petrak cited another point-and-click adventure, Dropsy by Jay Tholen, as an early case study for him in learning how to tell a story through non-verbal cues. One way he found to accomplish this was by including a contextually aware cursor, so that scrolling over the game’s interactable objects would trigger an animation of what actions players could take. 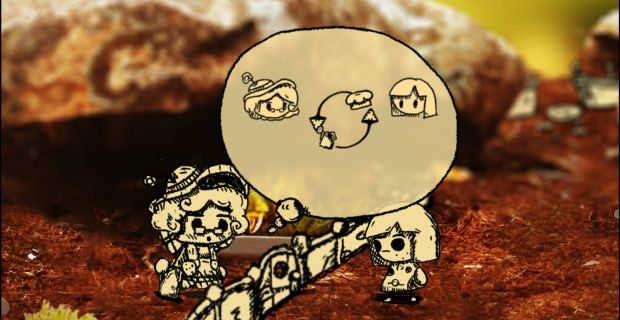 “Writing believable dialogue is a lost cause for me,” Petrak says.  “So doing dialogue bubbles felt like a really fun way to still be able to interact with the townsfolk in a meaningful way.”

While Tala’s demo successfully showcases the mechanics and feel he was aiming for, Petrak says he’s really hoping to broaden the scope if the Kickstarter succeeds. Funds would go to commissioning original music, developing a larger in-game world, crafting more puzzles, and fleshing out the story, he says.

But most of all, he wants to make his woodland hamlet a reality. Even when the project stalled for personal reasons soon after its inception, he never managed to shake the pastoral village in miniature from his mind.

“The world of Tala is a world that I want to be immersed in, and that world has never left me.”