I didn't much like the first in the most recent trilogy of Tomb Raider games, named with such originality and aplomb, Tomb Raider. (Square Enix's arrogance in reappropriating the original name of a series has never been a helpful move - see also Thief and Hitman, and I'd be willing to bet a fair wad of cash we'll be seeing "Final Fantasy" in the next few years.) It was a nasty, badly written torture sim which very occasionally let you do some running, jumping and shooting. Infamous for its repulsive early scene invoking sexual assault, it also made a mockery of Lara's former independence by making her subservient to a father figure, Conrad Roth, and then had a dumb-ass story packed with insulting stereotypes. But more than anything else, it absolutely resented ever letting you actually play.

Clearly it found its players, clearly my entirely correct opinions didn't sway the masses. It sold 3.4 million copies in a month (which hilariously Square said fell short of their expectations), and has spawned two sequels, the second of those about to appear in a few weeks. But gosh it frustrated me. 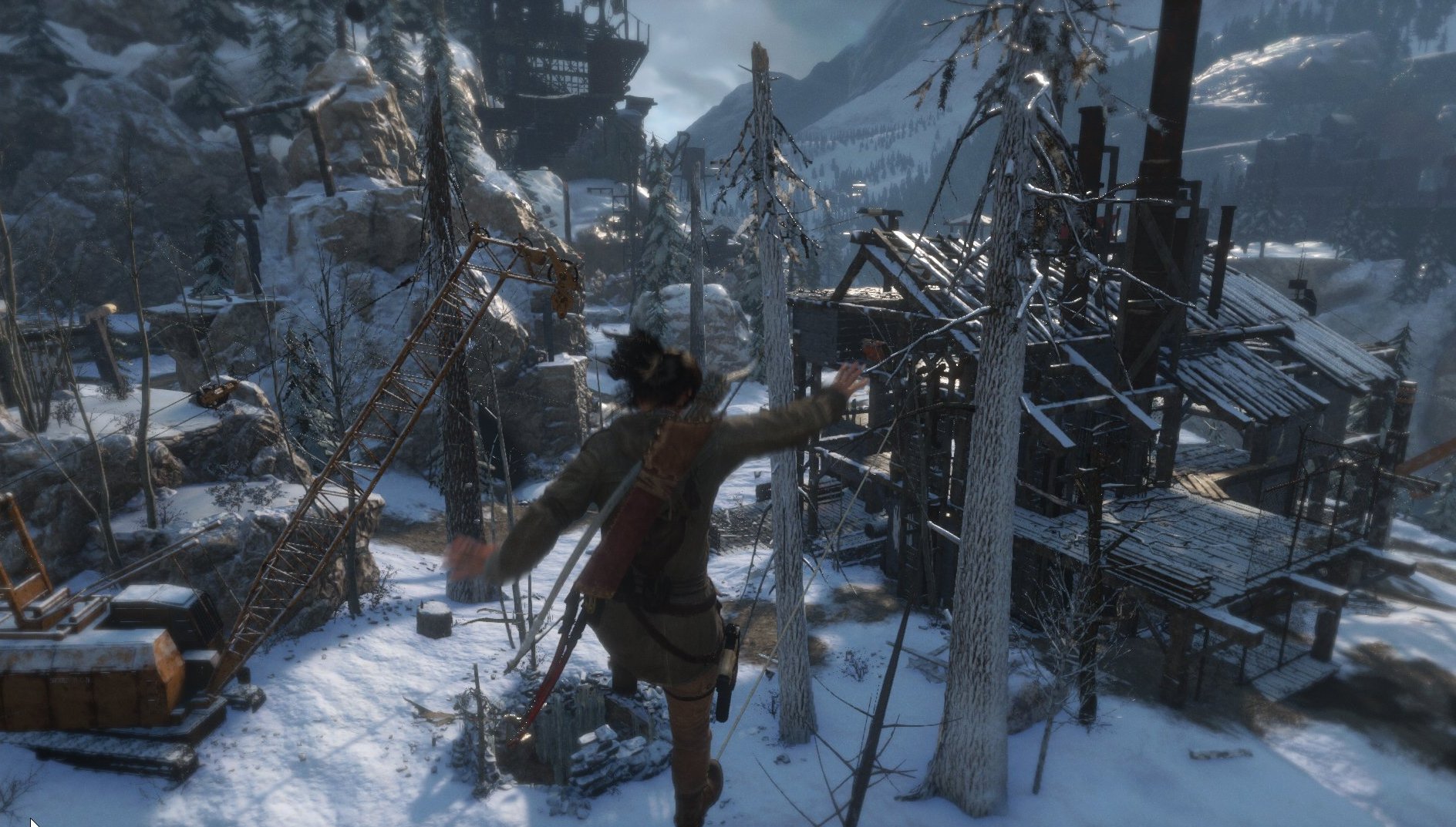 So I didn't bother with Rise. Adam reviewed it, and I figured the series I'd once so loved had moved far, far away from anything I wanted to play. I have so little patience for that trend that reached its peak in around 2013, where AAA multi-platform games became focused on spectacle rather than play, where you were guided by the cruelly implanted nose-ring down an exploding corridor and told where to look.

Tomb Raider, in its 2013 incarnation, may not have been as guilty as Medal Of Honor or Call Of Duty, but it absolutely ruined the superb fun it had available by burying it sixteen feet deep in QTEs, cutscenes, and invasive sludge. It was a game where you didn't get to decide whether to walk, crawl, run or sprint, where you couldn't walk into a room without the game deciding to take over, where you were only ever a couple of minutes away from Lara falling through her 39th collapsing burning building. 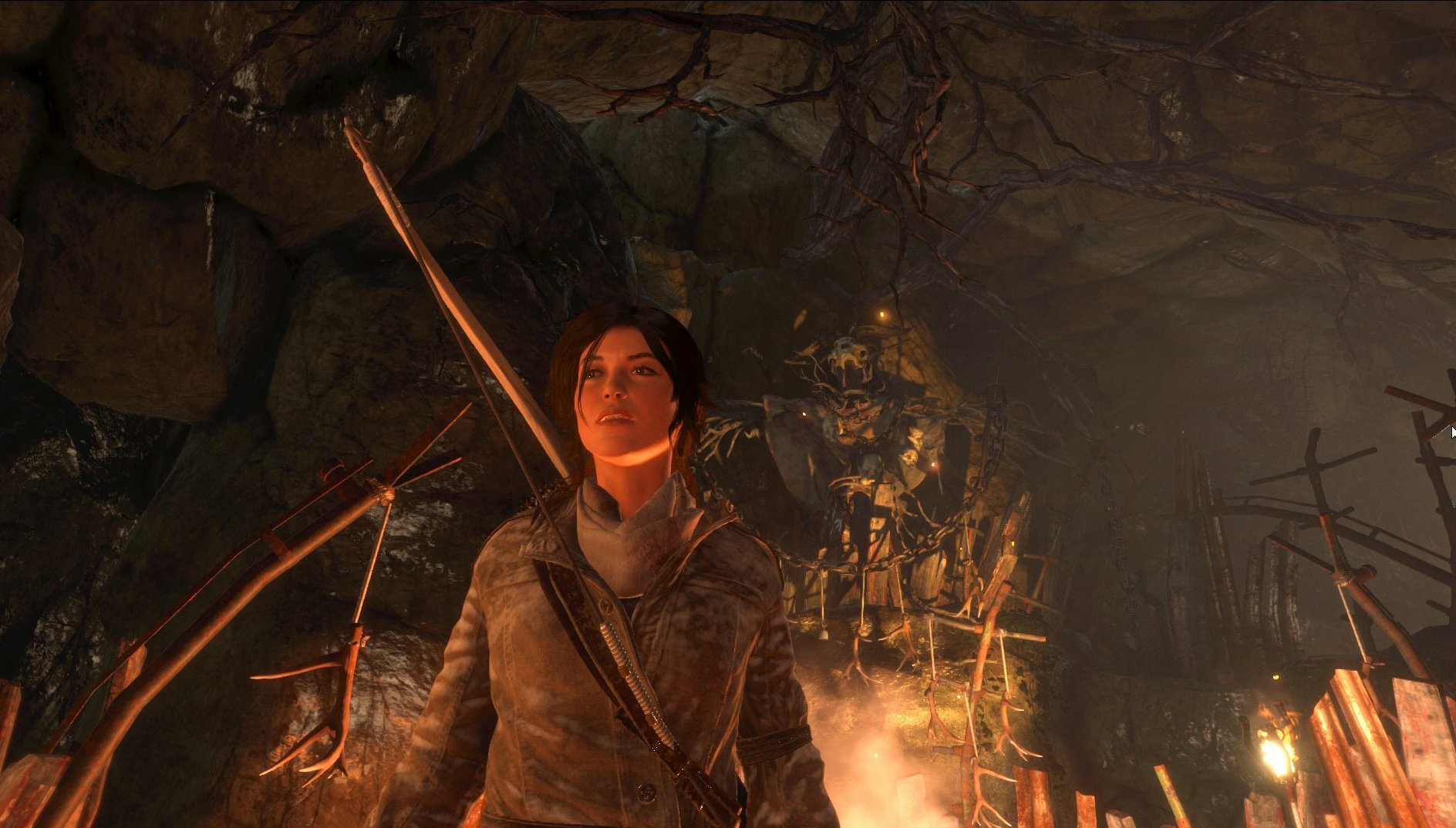 But here's the thing. I love Tomb Raider. I've loved Tomb Raider since I played Tomb Raider II on the PlayStation, and then every single game to completion since. (Well, nearly. I really, really tried to play Angel Of Darkness, but I think it's fair to say it was literally impossible.) I adored Tomb Raider Chronicles, when the silly gaming press were all pretending they were bored of the games because they all collectively thought everyone else was thinking that. My favourite game of the whole run is Tomb Raider: Legend, the first by current developers Crystal Dynamics (although I'm led to understand it's a very different team making these than those). I've loved it through its wonkiest periods, through its stupidest marketing, all the way up until 2013 when it stepped away from anything I wanted it to be.

And yet... Shadow Of The Tomb Raider is coming out next month, and I'm just craving playing it. I know! I know I'm a fool to myself. But skipping Rise means it's five long years since I've played a Tomb Raider. So, well, I installed Rise this week, because I can hardly review Shadow if I don't play it first. And... oh crap... I rather like it. 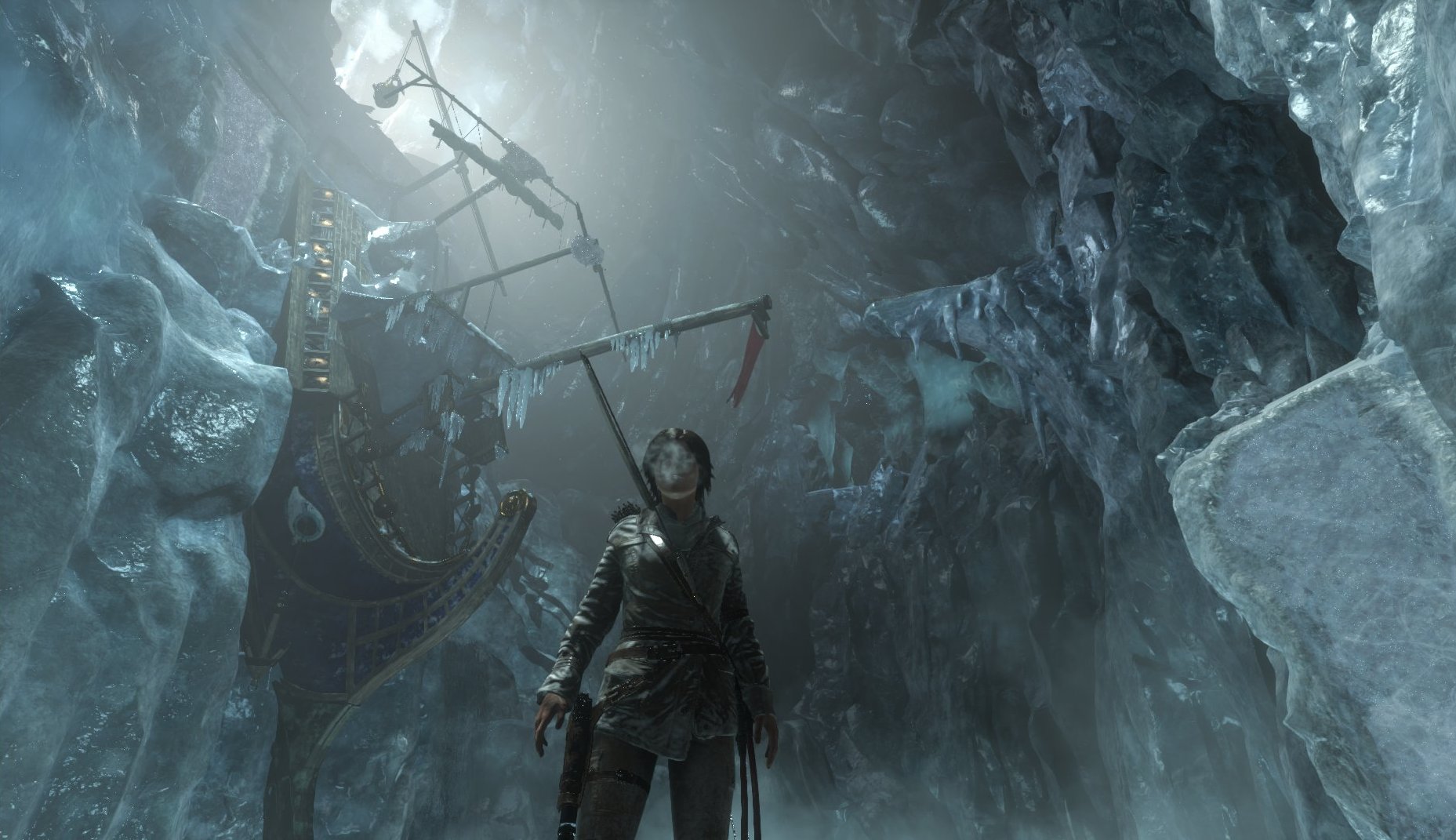 It's a ridiculous mess, of course. There are such fundamental problems with the acrobatics that I've boomed rude words at the screen. Lara's peculiar desire to leap sideways into a ravine when you're trying to jump up to a ladder is horrendous. The crappy highlighting of interactive objects, meaning you have to dance Lara around a box or corpse or whatever before you find the hotspot where she'll loot it, is outrageously bad. And good grief, yes, of course, it incessantly steals away controls.

So why am I liking it? I'm trying to fathom this. My best theory is: Crystal Dynamics figured out how to do the shit I hate much better. Also, Stockholm Syndrome. 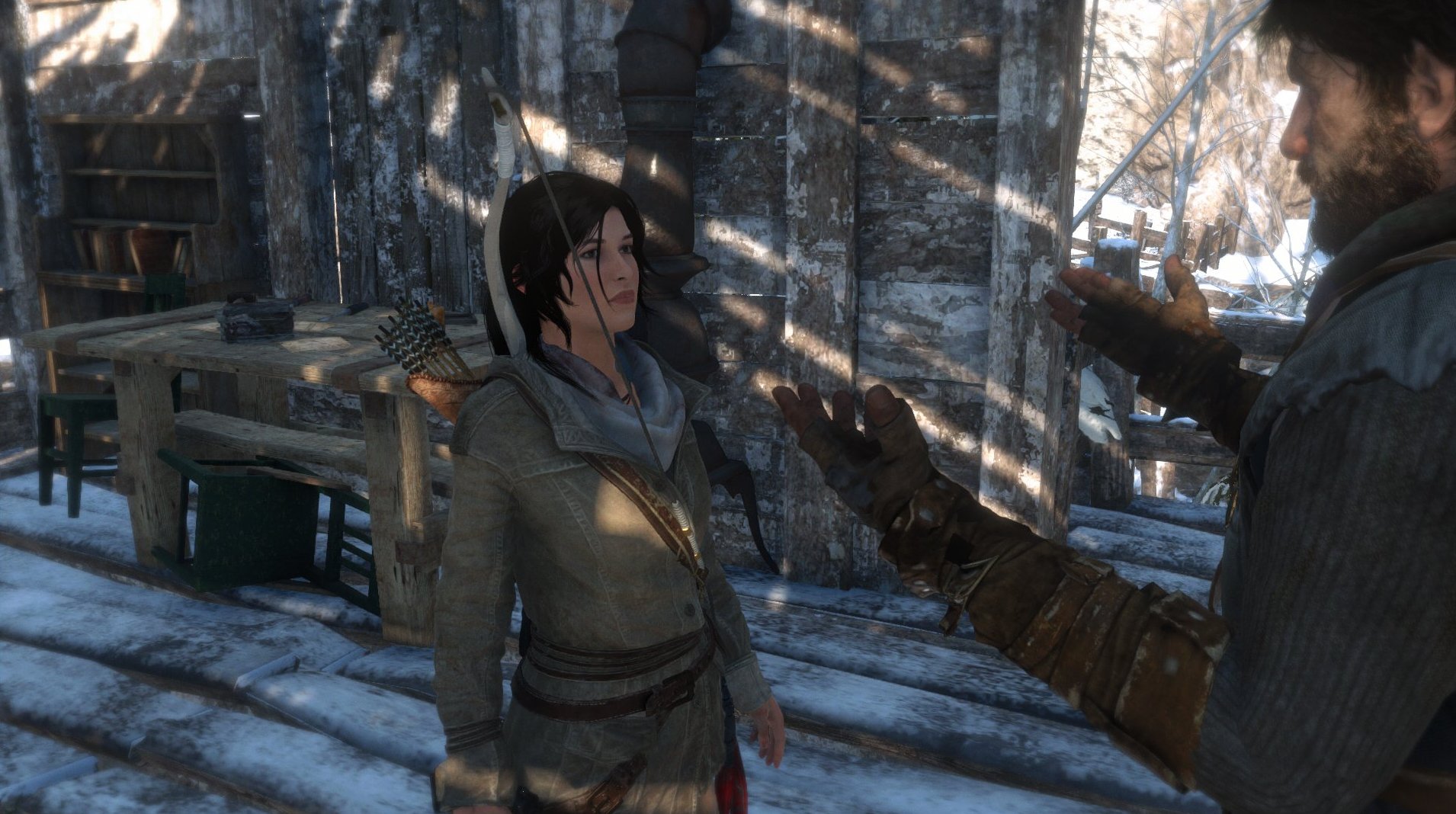 Let's take the control-robbing. Tomb Raider did this so obnoxiously badly that I spent swathes of the game thinking I was still playing when it had taken over, which is humiliating as well as tiresome. It also meant that I'd sit there doing nothing when it had returned controls to me without saying anything, wondering why this scene was even more boring than the last. Rise seems to have understood that this wasn't OK, and while it's still not nearly as clear as it should be, the cutscenes are at least often a lot more dynamic, more clearly detached from your role. And while they're still far too frequent, the game far too worried that you might just get on and have a good time rather than watch Lara walk into a room from a different angle for no discernible goddamned reason, it flows better.

It's not perfect. It still commits heinous sins like having you meticulously clear out a camp of its thirty-seven guards, and then have two of the exact same walking targets mysteriously outwit and capture Lara in a bloody cutscene. Unforgivable. And honestly, I'm really not sure how much is that I've just been worn down by a decade of this tortuous bullshit being a core part of AAA gaming, meaning I'm too weary to find the energy to care as much. It might be that. Or they might have just done a better job of threading their interruptions into the flow of the game. 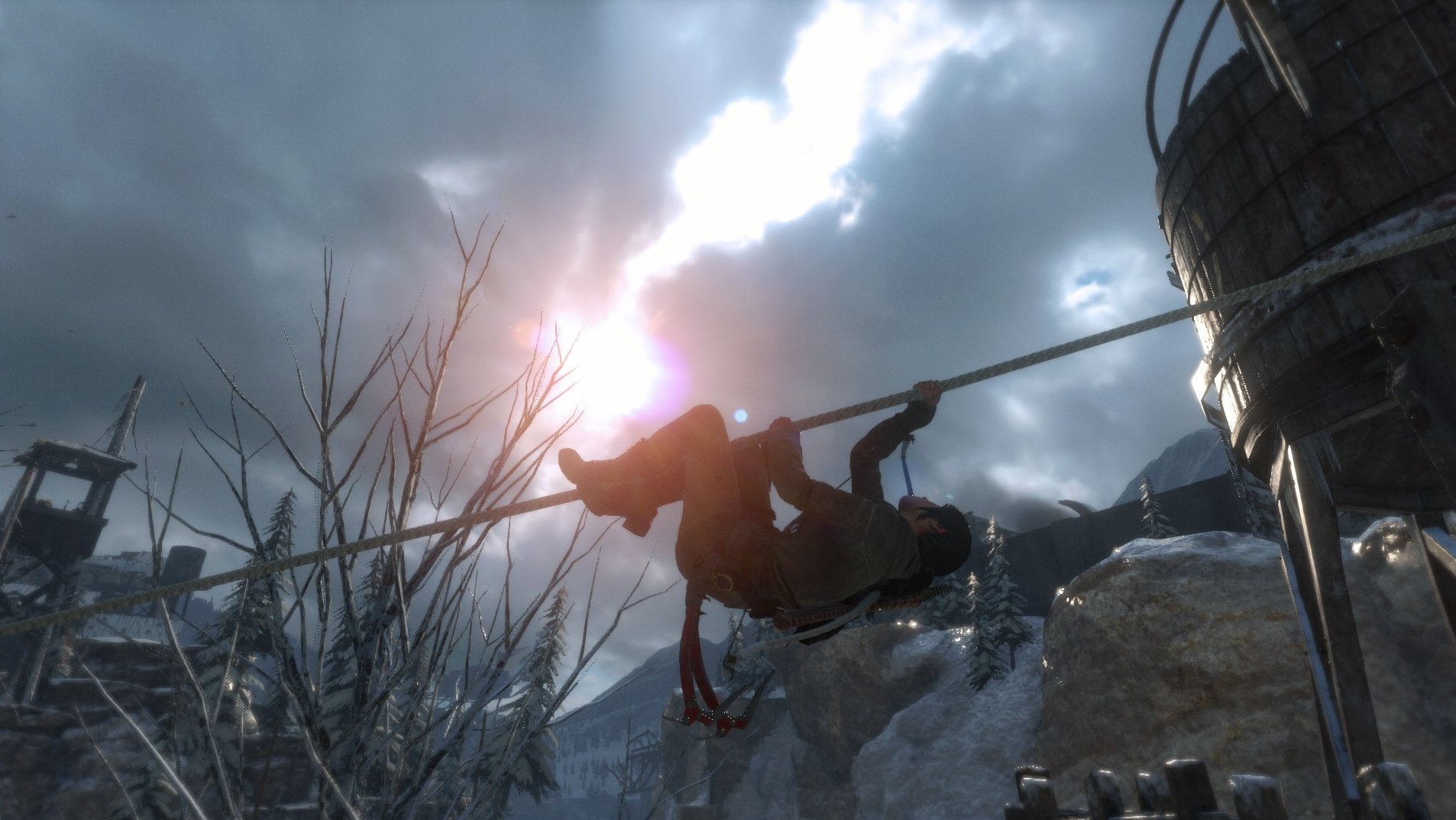 It also has a noticeably less offensively awful story. Tomb Raider did a surprisingly good job of depicting Lara as a vulnerable, miserable, tortured soul, a young girl forced to repeatedly murder against her will, gruesomely beaten and broken. Which was horrible! It did that horrible thing really well, despite the very poor commentary from many critics who sneered, "It says she hates killing and then makes you kill loads!", as if it didn't constantly have Lara moaning and horrified by her violence throughout. But it did a terrible job at everything else. Every line of dialogue was a cliche, every advance in the plot as boilerplate and predictable as is possible. It demeaned Lara as controlled by men, both good and bad, while surrounding her with a collection of simpering stereotypes - the nerdy white man who was hopelessly in love with her, the angry black woman whose personality was that she was angry, the nefarious double-crosser, etc. It was objectionably poor.

So Rise really only needed to not be terrible to look good in comparison. Which it manages! I mean, that "in comparison" is pretty vital, since it'd be hard to label any of its narrative as "good". It is once again a string of predictable character betrayals and barely-trying rubbish about finding a magic doodad before the baddies find it, but might finding it all be bad??!?!11one. It still contains dialogue as atrocious as,

I mean, imagine writing that into your script and not feeling self-conscious. Not recognising how idiotically trite it is. Just being OK with filing that copy. Bah. (I recognise that such enormities can get added to scripts by awful producers who couldn't write their name in their underpants without spelling it incorrectly, but still feel they have a better idea of how it should go than the writer they hired.)

But it's not offensively bad, at least. It's just dumb action movie guff, and I'm fine with that. 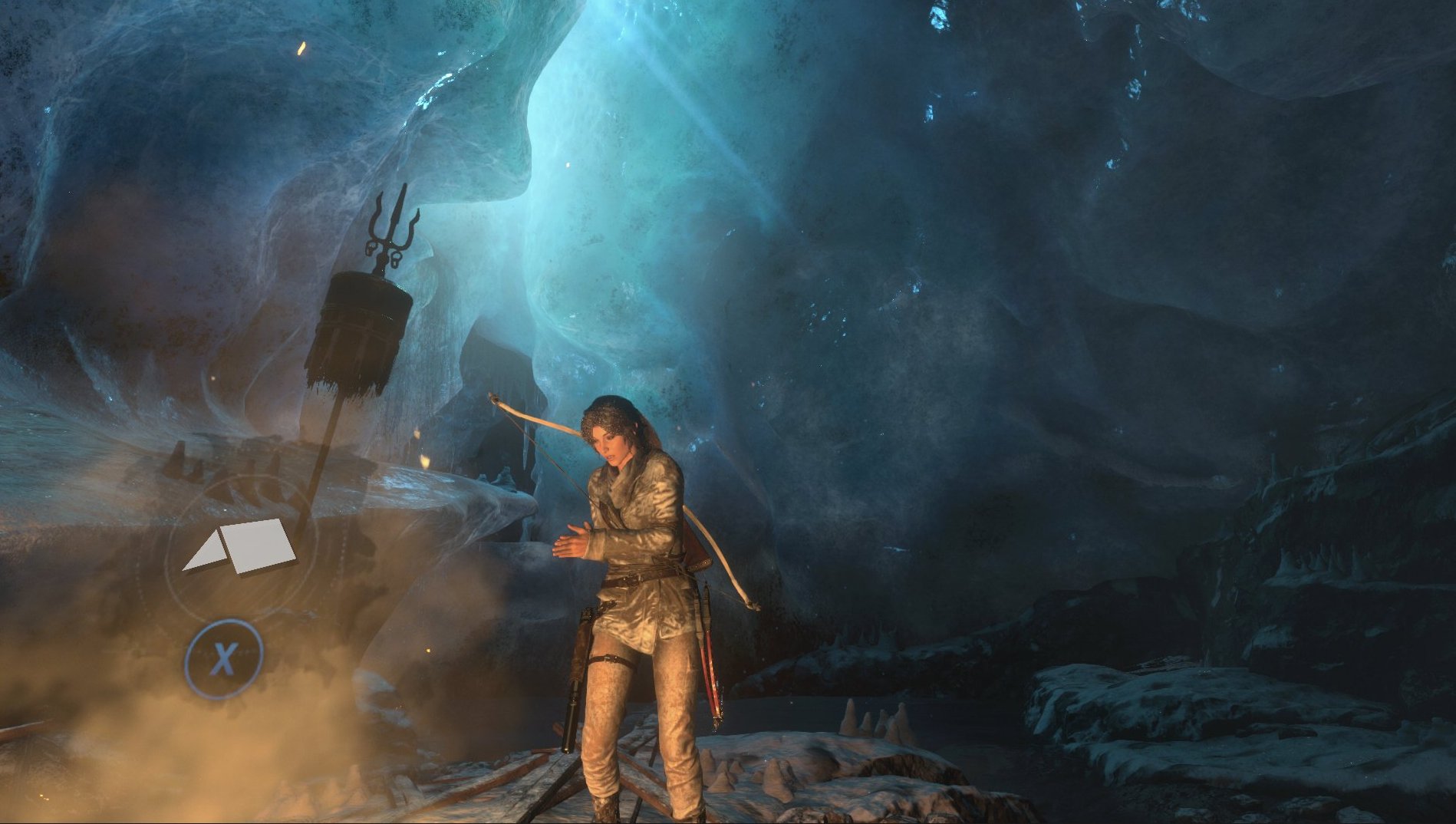 But I think more than anything else, it's that it lets me play for long stretches at a time. Yes, it interrupts a lot, far more than it needs, but it's not nearly as infuriating.

It still pretends that it's an open island, offering you the ability to teleport between base camps, explore at your leisure, while in reality requiring that you follow its lead down through the missions in order. But, perhaps because I was expecting it, and perhaps because each area itself feels larger, more open, more varied, and with more opportunity to improvise, it feels less of a problem.

And the QTEs are nearly all gone! Nearly, not entirely, but it's stopped being so wretchedly awful as to demand you press the right button in the middle of a cutscene to keep watching it. That's a big step forward! Interactive scripted sequences are still a bit crap, but often that's due to the wayward jumping - Lara again for no reason seems to prefer plummeting to her death than landing on the wobbly ice rock in front.

The game repeats the idea of having Lara upgrade her abilities with incremental points, via a pretence at an XP system, and once again, it needn't have bothered, and instead just added abilities as you progressed. It's so superfluous to the reality of the game that adding vital elements like rope arrows, or knives (why Lara is incapable of finding a knife in this world of weapons I'm not sure), or explosives, is still done as a plot beat rather than an achievement. But still, I wasn't expecting it to meet that promise this time, because it didn't last time. Oh God, it IS wearing me down, isn't it? 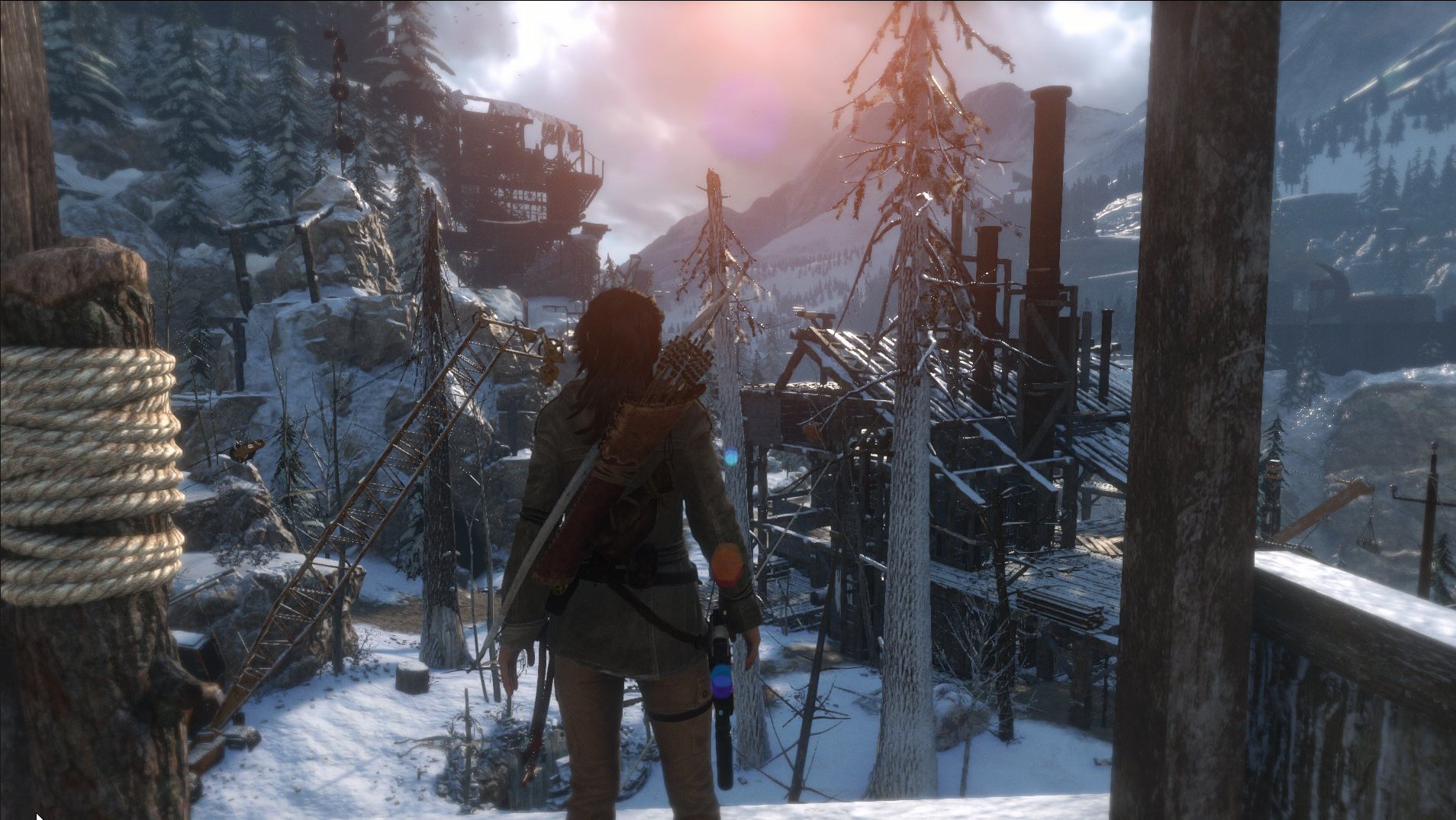 Where does this leave me for Shadow? I'm intrigued, really. I'm still going to be a bit disappointed if the openness is once again, "You can go back through areas you passed and find all the missing bits after, but it will feel really disingenuous." Because that's a bit tiresome at this point. And will it have a story worth hearing? Probably not. But I'm hopefully that the trends will continue, the game more focused on exploration and adventure, less on sitting and watching as characters blandly talk at each other. Dear me, I'd love it if it could contain a joke or two, and perhaps slightly fewer scenes of Lara being beaten. Some levity is desperately needed.

But... I quite like Rise. I'm enjoying it, rather a lot, with a good few caveats and bellowed frustrations. I think it's worn me down. I think I'm accepting that which I hate, and I'm not sure if I like that. Spoonfuls of sugar seem to help the shitty cutscene interruptions go down. Rise is definitely a far superior game to 2013's Tomb Raider guff-fest, but I can't help but think I'm meeting it halfway. What's becoming of me? Send help.