I love The Witness. It’s a great game. But the more I play it, the more I’m sure that Jonathan Blow was taking the mick out of everyone with it. In an interview with The Guardian, he said he wanted to make video games for people who read Gravity's Rainbow. Widely considered to be Thomas Pynchon’s magnum opus, Gravity’s Rainbow made TIME magazine’s list of “All-Time 100 Greatest Novels.” Pynchon’s book is a great big amalgamation of beautifully messy imagery that leaves you absolutely clueless as to what actually happened by the time you put it down. Hm...

Video essayist Joseph Anderson posted a video back in 2016, called “The Witness: A Great Game That You Shouldn’t Play”. In it, he attempts to come to terms with Blow’s shenanigans, but never quite does. What I found most interesting about Anderson’s video was his focus on the fact that The Witness absolutely does not respect the player’s time in any way, even though it emphatically claims that it does.

This is the Steam store description for The Witness:

“The Witness is a single-player game in an open world with dozens of locations to explore and over 500 puzzles. This game respects you as an intelligent player and it treats your time as precious. There's no filler; each of those puzzles brings its own new idea into the mix. So, this is a game full of ideas.”

If anybody who has completed The Witness can hold their hand up and say, “Hey, this game really treated my time as precious,” then go right ahead. This is a game in which your time is devalued over and over again. That is what this game does. Platforms lower with agonising slowness. Moving bridges do so at a snail’s pace. In an interview with the PlayStation Blog back in September 2015, Blow actually said that “There’s at least one puzzle in the game right now that almost nobody -- like 1% of players -- will ever be able to figure out.” Brilliant. If you’re part of the 1%, power to you. I’m part of the 99%, though, so I don’t feel is respected, or my status “as an intelligent player”. But I don’t think that JoBlow lied in the Steam description exactly. He didn’t pull a Molyneux. I think he pulled off one of the most annoying and impressive stunts in video game history.

In a 2016 interview with Time, JoBlow said that, “ there’s also a layer at which the puzzles
are at least metaphorical and about understanding the world that we’re in.” If you haven’t completed The Witness, this is what happens at the end of the game. You wait for an elevator that takes what, maybe three minutes to descend, and you just kind of whizz around above the island for a bit, and the game restarts. What a lovely ending. What a way to respect you as an intelligent player, who invested so much precious time in the game. Money, too. Don’t forget that you also invested money. But this is just one ending. 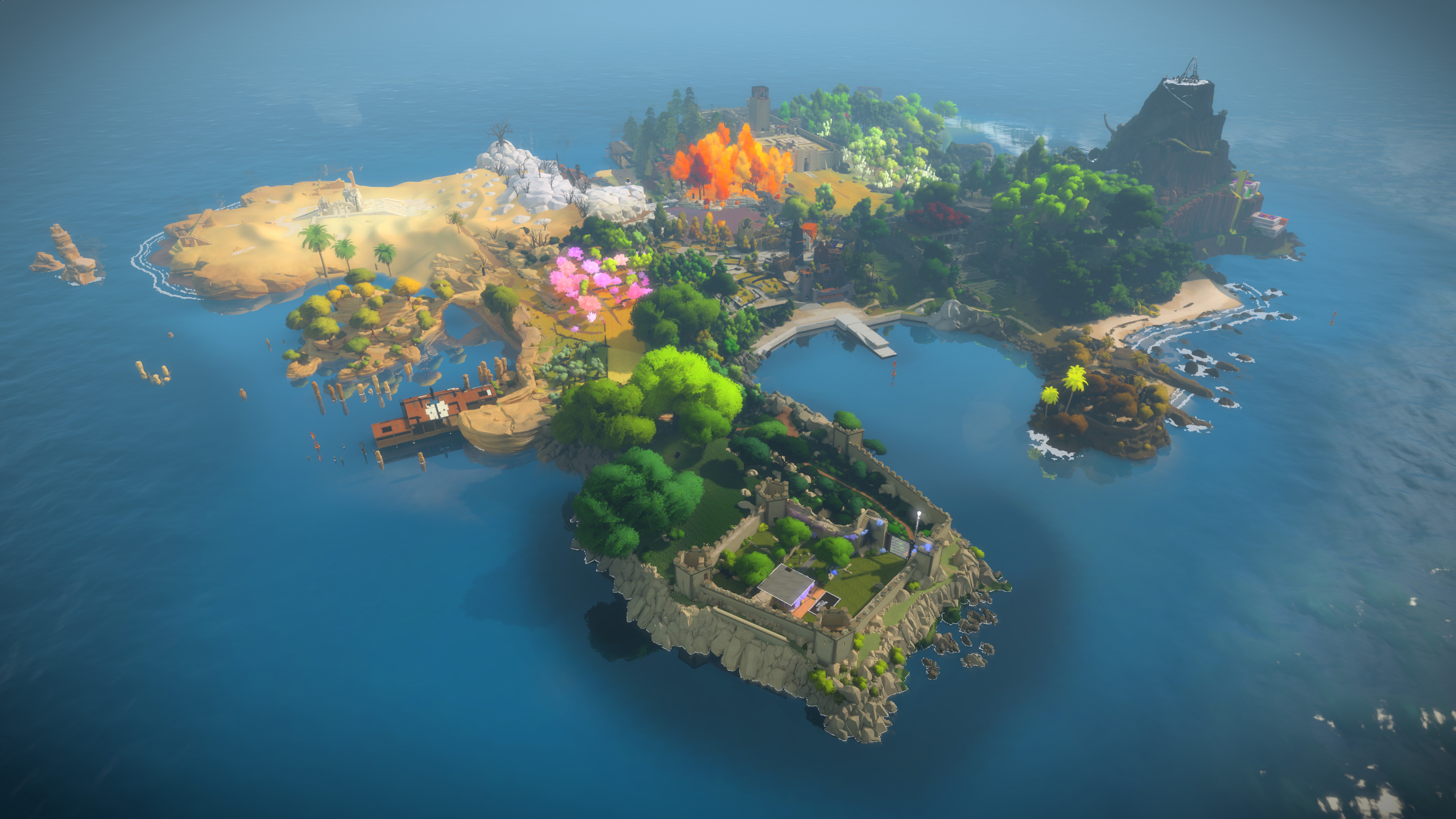 There are lots of things to spoil in The Witness, but I’m only going to discuss one, right now, and it’s the absolute best part of the game. It is the fact that the very first puzzle in The Witness is a filthy red herring.

As you progress through The Witness, you gradually learn that you can interact with the environment. Specifically, circular surfaces that resemble the origin node for the game’s puzzles can be used as a starting point for a line for an environmental puzzle -- lines are hidden in cliffs, rivers, broken buildings. When you go back to the start, you can just rush straight through the first gate all over again. Or, you might notice that the gate itself is a puzzle. This opens a secret room and, after solving more puzzles, culminates in a live action video from the point of view of the person you’ve been playing The Witness as. They come out of a VR machine and stumble around a small dev studio. That’s, like, deeper than the ocean. The real ending is actually at the start of the game. But you only realise this if you’ve already played through it.

I’m super conflicted about whether or not all the hours The Witness took away from me can be justified by this scene alone, but that’s kind of the point. Players are offered the ability to apply what they learned in their first playthrough in order to get an entirely different story (I actually didn’t get this until my third one, though, so I’m a bit of an eejit, apparently). This is tied to the game’s main formal affordance -- the fact that it can be replayed to yield a different narrative. Jonathan Blow did something in The Witness that can only be done in a video game, and that’s something to give props to. I’m reluctant to give him props, but he deserves them. 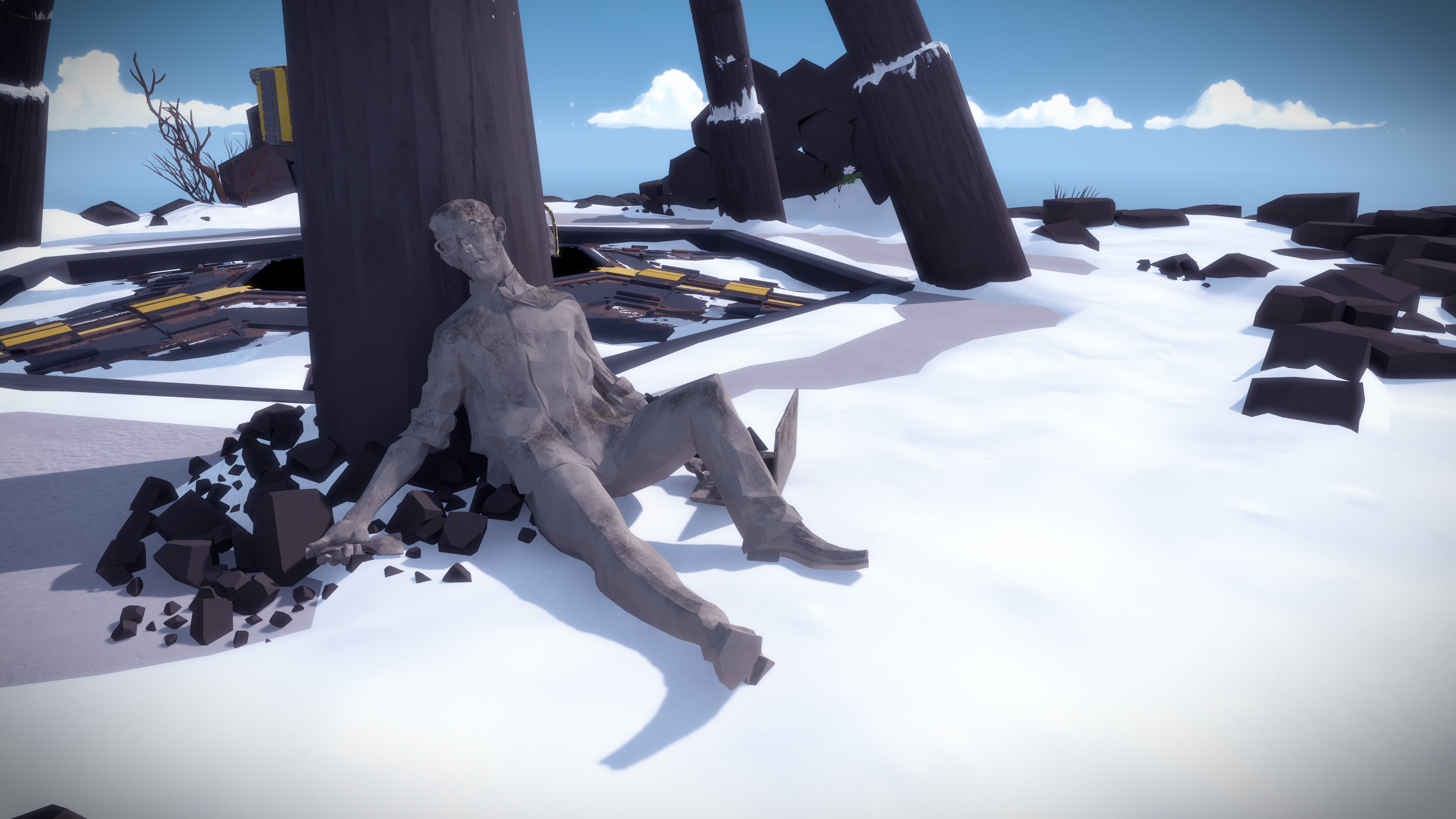 When Blow said, “I don’t want to make games for Metacritic. I want to make games for people who like to read Gravity’s Rainbow,” the claim that he's making postmodern Pynchon-esque stuff really rubbed me the wrong way. But I suppose he does absolutely smash whatever wall is between you and the story. By relying entirely on non-linguistic communication, Blow successfully disproves the notion that language is the only medium through which the game’s world, and, by extension, our world, is perceived. If you finished The Witness, you were essentially guided through a story without the game using words as a crutch for communication. As much as I hate to admit it, he made a pretty hardcore postmodern video game. It’s also very pomo to make people realise that they’ve invested a significant amount of time into a game that deliberately wastes it, and then say, “and hey, guess what? The ending’s actually at the very first puzzle, hahaha!” JoBlow actually has successfully aligned his vision with the king of the edgelords Thomas Pynchon.

We all fell for his chessboard grid puzzles and thought that there was some kind of deeper meaning, some kind of clarity to be found. There isn’t. It’s super interesting that the game has this ambiguous yet somewhat conclusive video as the “real ending,” but it still takes you 80 hours (or in my case, 100+) of “wtf is going on” to get there. It’s a game that takes the piss out of you, your intelligence, and your time, and by buying it, you pay Mr. Jonathan Blow money to laugh at you. JoBlow is a rare case - a pretentious but brilliant designer who I have a stupid amount of respect for. He wasted my time, but did one of the most innovative things I’ve ever seen in a game by basically putting you through an 80 hour tutorial. I hate to admit it, but he actually did make a game for people who like to read Gravity’s Rainbow.