Premature Evaluation is the weekly column in which we explore the wilds of early access. This week, Fraser's living out his dream of being one of the handsome boys from Supernatural by hunting down demonic beasties in Crytek's multiplayer shooter, Hunt: Showdown.

Hunt: Showdown never has any silence to break. It’s always noisy. Every groan, gurgle and scream, even the rustling of leaves -- they all echo across the swamp, exploding out of invisible amps. After awhile, it becomes a low, menacing drone; an ever-present threat that you just get used to. The trick - I can only assume, as I’m quite terrible at this bounty hunting malarky - is to cut through the background din and pick out the real dangers. The closest roars. The loudest footsteps. The bullet whizzing right past your head. 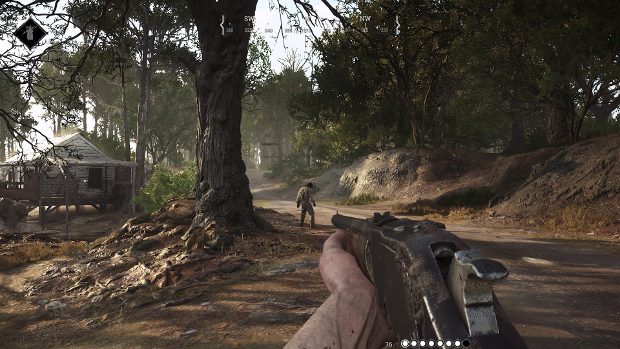 In a game about hunting down supernatural beasties and sending them back to Hell, one of the top causes of death is still a bullet to the face. Monsters are ancillary obstacles that spend most of their time moping around like moody teenagers, right up until the moment a bunch of them swarm out of a barn and slaughter you and your partner because you were more worried about being shot. Ultimately the bullet still gets some credit.

Each match, or contract, starts with a monster being the focus, however. Hunting duos are dropped into a map with a single goal: find one specific monster and kick its arse right back to the Devil’s BBQ. Finding the monster involves following clues that can be spotted using a special vision mode. You go from clue to clue until you find the monster, kill it, banish it and then escape the map before other hunters can stop you and get your loot. 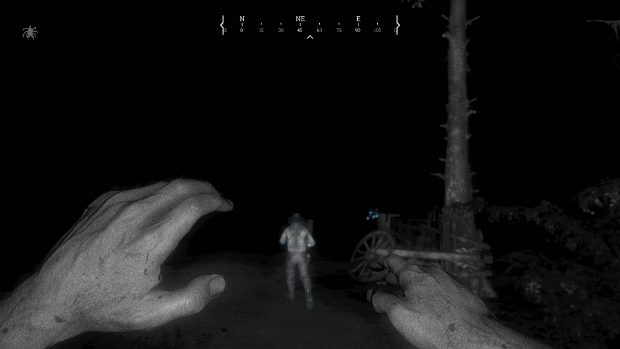 It’s extremely bare bones and the clue system isn’t remotely satisfying - it certainly doesn’t feel like you’re actually tracking anything - yet this skeletal frame proves to be just enough to hang a great many standoffs, chases and unexpected moments on. Every group is gunning for the same creature and will ultimately, if they survive, head towards the same location.

Unexpectedly, I’m reminded of Plunkbat. There’s more than a hint of a last man standing mode about Hunt: Showdown, but the similarities are more in their shared desire to cut away a lot of chaff and get groups to collide with each other as they race or sneak their way to a simple objective, usually with a climactic gunfight to close things out. And like Plunkbat, it’s a game that really favours ambushes. 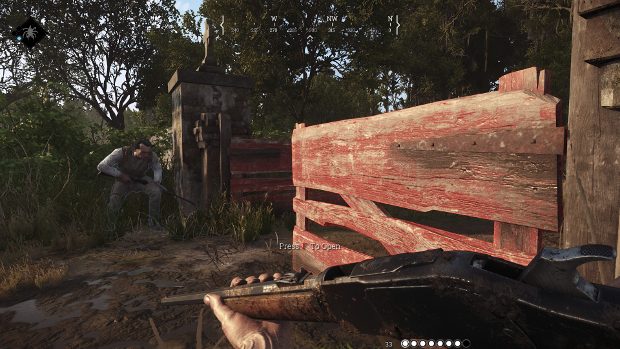 It pays to be an awful person. If, for instance, you find the monster’s lair before the other hunters, you might not want to engage it. Most creatures, like zombies or human-beehive-monsters, can be taken out pretty easily, but these boss fights go on for a lot longer, and they hit a lot harder. Even if you do manage to survive, you'll have given the other hunters a lot of time to home in on your position, putting your prize at risk. So maybe you don’t rush in, guns blazing. Maybe you find somewhere nearby to hole up and wait for another group. Maybe you let them do the heavy lifting and put a bullet between their eyes when they’re done.

The risk is not taking them out quickly enough, because duels are a bit tricky. The guns all feel exceptionally beefy, but they aren’t easy to use. Reloading takes just long enough that you feel incredibly vulnerable, and you have to aim even if you’re firing from the hip, pressing shift on top of that to aim down the sights. In close quarters, firearms can feel too slow, especially against an opponent with a penchant for constantly jumping. That’s why shotguns, dynamite and barbed wire grenades were invented, I suppose. And partners.

I can just about forgive the aiming eccentricities because of the gorgeous reload animations. They’re extraordinarily satisfying, even if you might not get to enjoy them while you’re trying to fend off a giant spider that’s intent on eating your face. Gawk at them for a moment.

I’m not what you’d call a crack shot, and I’m prone to panicking, so I’ve gone through my fair share of hunters. Hunt: Showdown has an unusual progression system. When you’re taking a contract, you need to first hire an actual hunter from a list - exclusively male, awkwardly - that can be refreshed. Each of the randomly-generated hunters comes with a primary and secondary weapon and some tools, like medical syringes, a flashlight or some dynamite.

When a hunter dies during a contract, they’re gone for good. All of their weapons and tools, whether they were part of the hunter’s original loadout or you bought them with in-game cash, are lost with them. If they survive, however, not only will you get extra rewards, you’ll also be able to start upgrading them. 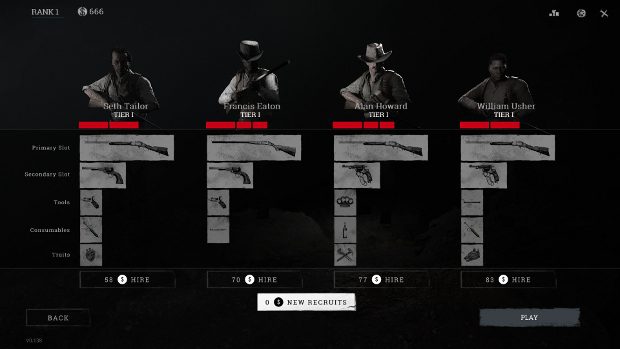 Even when you lose a hunter, it’s not the end of the world. As well as being able to nurture your living hunters, you’ll also get experience points that empower your bloodline, unlocking new weapons and tools. It’s possible to earn cash even from a failed mission, which in turn an be spent on better hunters and more effective gear. So while, yes, you’ll undoubtedly play some games where you spend 20 minutes walking around until you’re sniped from the roof of a barn, it’s never a waste of time. Even if you’ve just killed a single zombie or uncovered one clue, you’ll get points.

Randomly-generated hunters and multiple progression systems mean that it can be hard to plan for a confrontation with another hunter. While the matchmaking system seems to match players up based on their bloodline level, there can still be significant disparities. Even at the lowest levels, you could be traipsing through the swamp with a bloke with no abilities and a simple pistol and rifle combo, while one of your opponents has silenced weapons, explosives and the ability to run faster. They might have just had more money to spend, or generated a better roster of hunters to pick from. 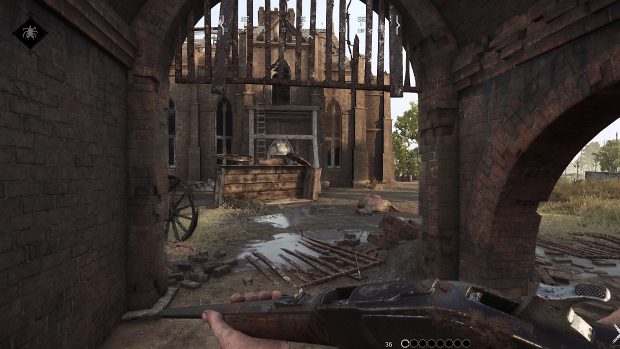 But that lack of predictability is also the source of some exhilarating fights and some tense games. Perfect balance isn’t always a desirable trait. The game goes out of its way to tip the balance and conjure up interesting scenarios.

In my first attempt to hunt down the spider, I had the good fortune to spawn right next to a compound containing a clue, which almost made up for the fact that my partner got lost between the lobby and the game, leaving me playing solo. I’ve not had any connection or performance problems, but it definitely looks like I’m one of the lucky ones. I headed towards the compound on my own. Not only did I discover the third and final clue straight away, but the actual target location was just down the road. Five minutes into the game and the end was already in sight. Of course, I also had to kill a spider (literally) from Hell. On my lonesome. 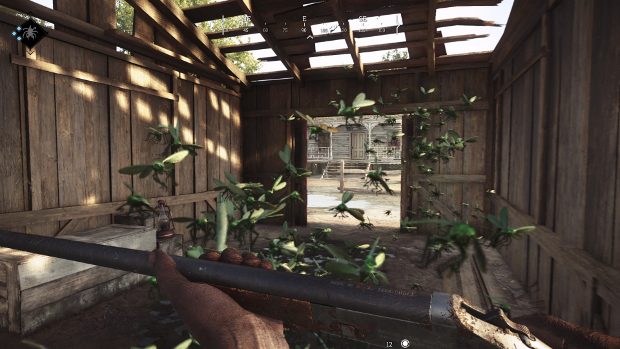 Not wanting to draw any attention to myself, I did my best to avoid the animated corpses chewing on carrion. I didn’t want to fire my weapon and let everyone know where I was. As I made my way inside the compound were the spider had made its nest, I started to feel my hand sliding off the mouse. I’m dreadfully arachnophobic, and I could hear the monster scuttling around in the rafters. I was terrified. I followed the noise anyway, until a swarm of mutant bees attacked, carving off a chunk of my health.

Realising that I’d die in a couple of hits, I hung back. Five minutes later, other hunters started to appear. I had an elaborate plan for taking both them and the spider out, but it wasn’t necessary. They were being chased by hives and zombies and the moment they found the spider, they were killed immediately. I’m so much better than that, I thought, so I decided to take a risk and fight the completely uninjured giant, demonic, venom-spitting spider. 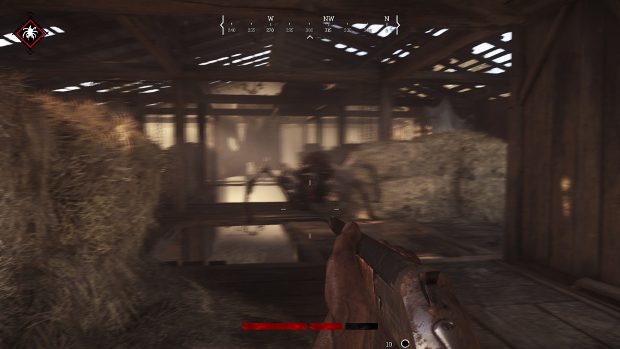 I snuck through the attic, and just as I caught a glimpse of the spider, I got a fright and bumped into some metal chains, creating a terrible racket. When I looked back at the spider, it was gone. It somehow got behind me, and when I turned around I was treated to a face full of venom. My shotgun went off and I freaked out, stumbling backwards. I fell to my death.

Finding the monster first guarantees nothing.

Despite getting to the spider in that match, I didn’t kill a single thing. That’s not odd for me. Some players will run up to every nearby enemy and take them out with a knife, others are more trigger happy, but I try to avoid conflict for as long as possible. Hunt: Showdown has a lot of tricks to catch out sneakier players, though. Everything you do makes noise, whether it’s crawling through the undergrowth or walking on wooden floorboards, but that can be mitigated by going as slowly as possible. What you’ve really got to watch out for are the animals. 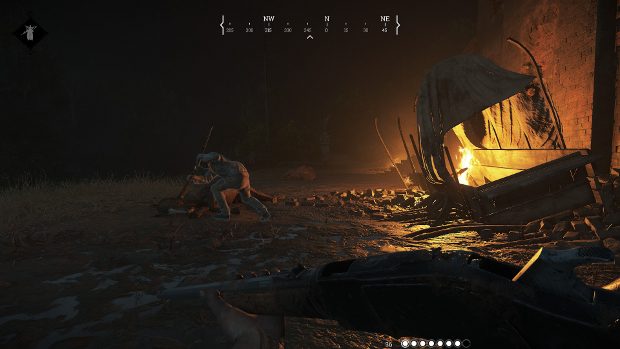 Crows scatter and shriek when you approach, dogs bark and snarl, and seemingly dead horses raise their heads and make an ungodly racket. The equine alarm systems are probably the most nightmarish things in Hunt: Showdown. Stopping the alarm is worse, of course, because you have to murder a horse. During one contract, my partner stumbled upon one such horse and then tried to take it out with the butt of his gun. Hunter animations normally leave a lot to be desired, but as he slowly beat this horse to death, it looked far too real.

Horror aside, the game doesn’t really communicate what it is very well. It sounds like Evolve with PvP, but it’s not a game about hunting monsters, it’s a game about hunting people. Sometimes that means using monsters as bait, but just as often it happens by stumbling on them and getting into a gunfight. And it’s not clear if that’s a result of the monsters simply needing to be more aggressive or if the PvE is always going to play second fiddle.

It’s not quite what I thought it was going to be, but Hunt: Showdown is still a clever competitive shooter and an excellent source of emergent stories. And disasters. Mostly disasters.