Moon's haunted, you've likely heard, and in Destiny 2's Shadowkeep expansion we're sent to bust those ghosts. I adore the tools we wield to do that. A new set of Shadowkeep weapons salvages chunky vintage lunar hardware from the golden age of humanity and purifies it with magic rituals, leaving weapons bristling with magical talismans. These are the guns I need to pop phantoms and steal their treasure. I am delighted.

Destiny's Moon is home to something literally named the "Hellmouth" which spews out Hive, an alien species who gain great power through murder, ritual magic, and supernatural parasitic worms. In Shadowkeep, the Moon becomes even more cursed. Fight wizards with wizards, I always say.

Shadowkeep's new 'Dreambane' weapons and armour do just that. They're gained by shooting moonmen and gathering ritual materials then baking the lot in a spooky gun oven, a repeatable process like Black Armory Forges or Menagerie runs. I've written before about how much I enjoy how Shadowkeep's armour sets combining spacesuits with magic, and now I'm playing it myself oh boy these guns are even better.

Consider the pulse rifle, Premonition. The base is a tattered gun from old moonfights we purify with knotted cord binding it, strings of angular metallic beads and charms, and what I think are seed pods. A gun for killing ghosts on the moon. 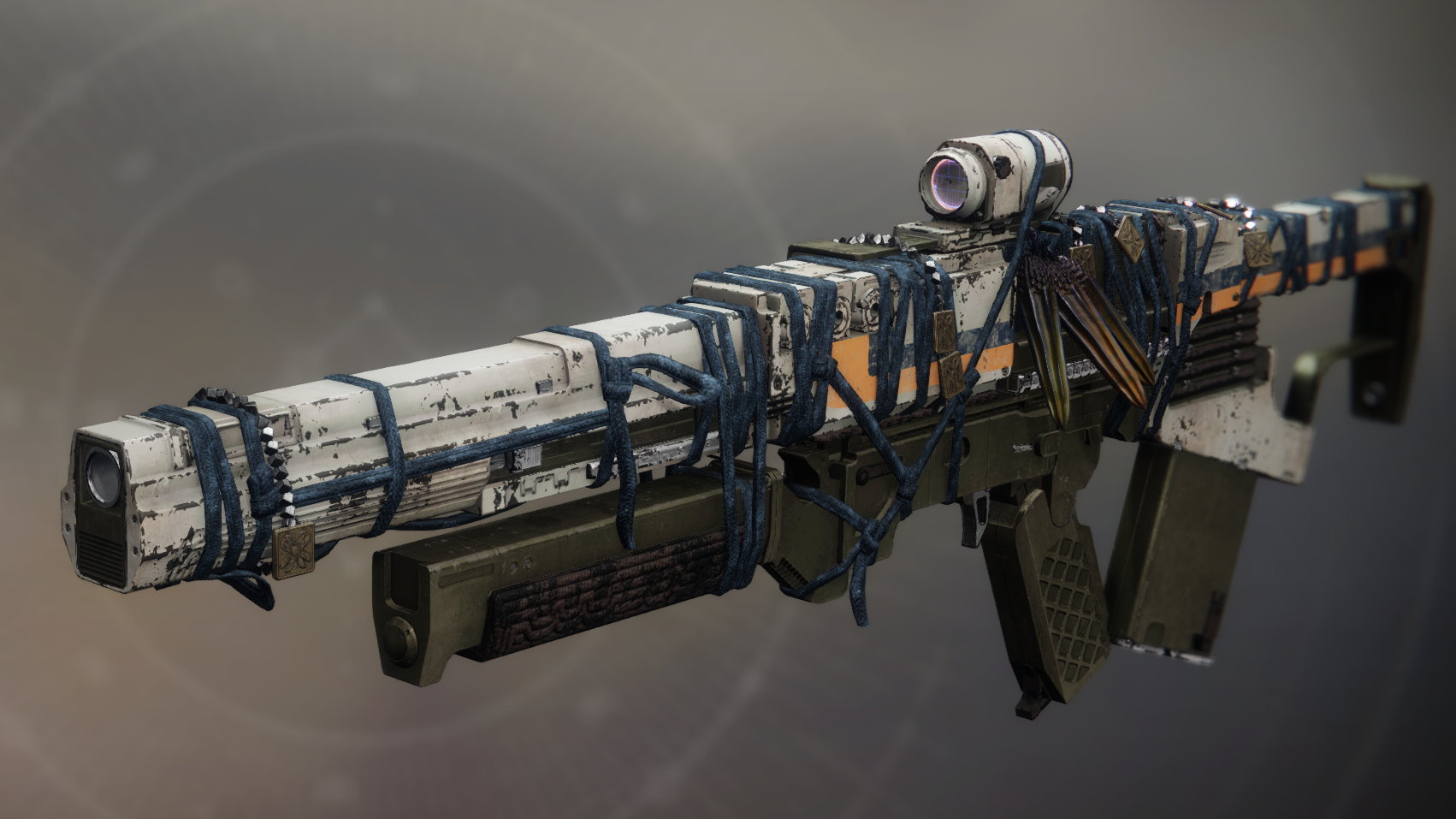 The auto rifle, Arc Logic, adds to the vintage lunar hardware feel with a good layer of insulation tape. Then wrap round concentric rings of small beads, yet more cord and charms, and a few monster teeth - one with a crystal jammed into the cavity, just because.

I do like when Dreambane guns are wrapped two ways, with insulation tape holding their physical form and cord binding their essence. 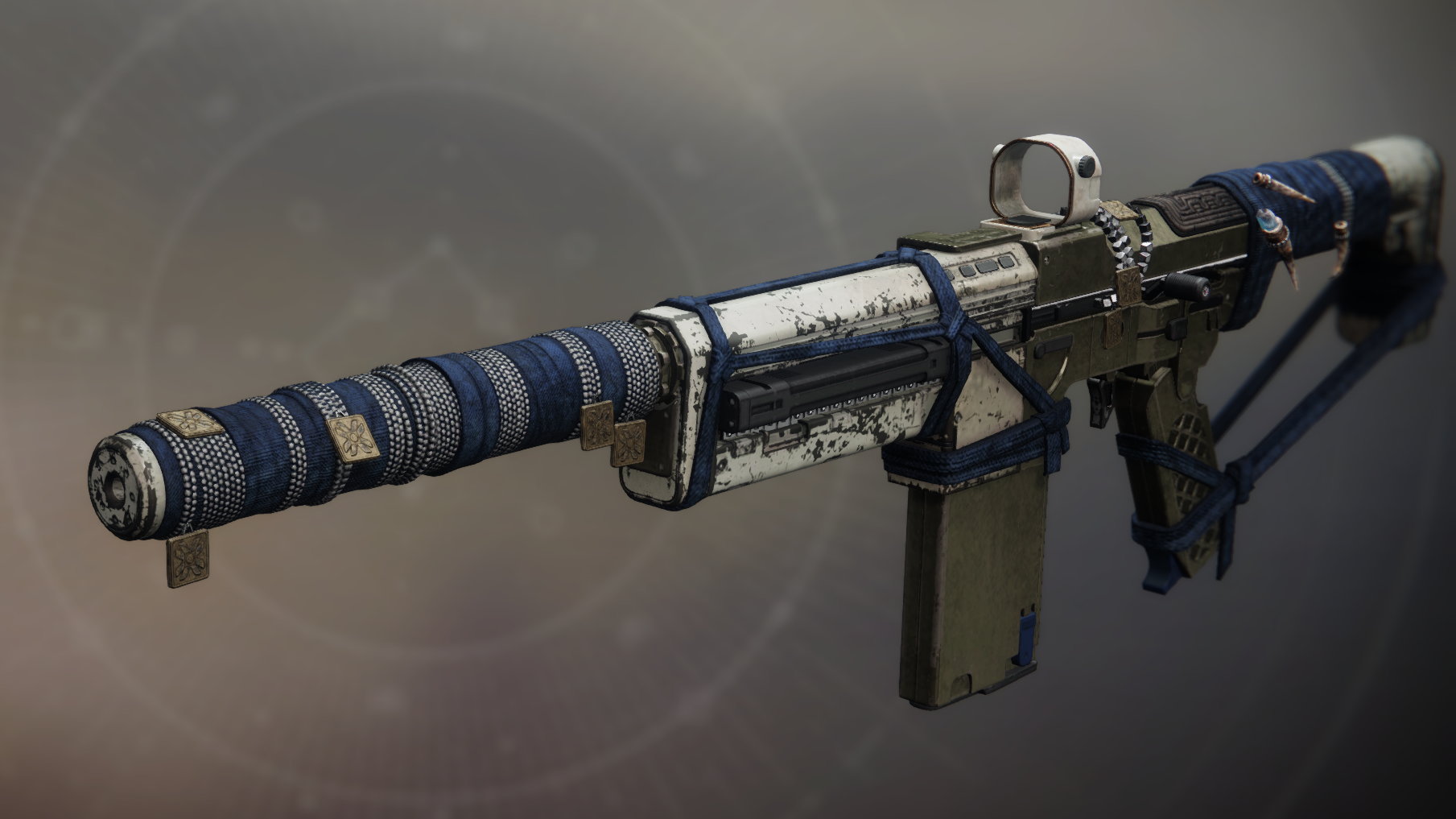 Perhaps my favourite is the hand cannon, Loud Lullaby. It was a clunky tape-wrapped lump of a revolver even before the ritual, then we go to town with beads, charms, and half a bird. That's a magic gun alright. Good interlocking doodads on the cylinder too. 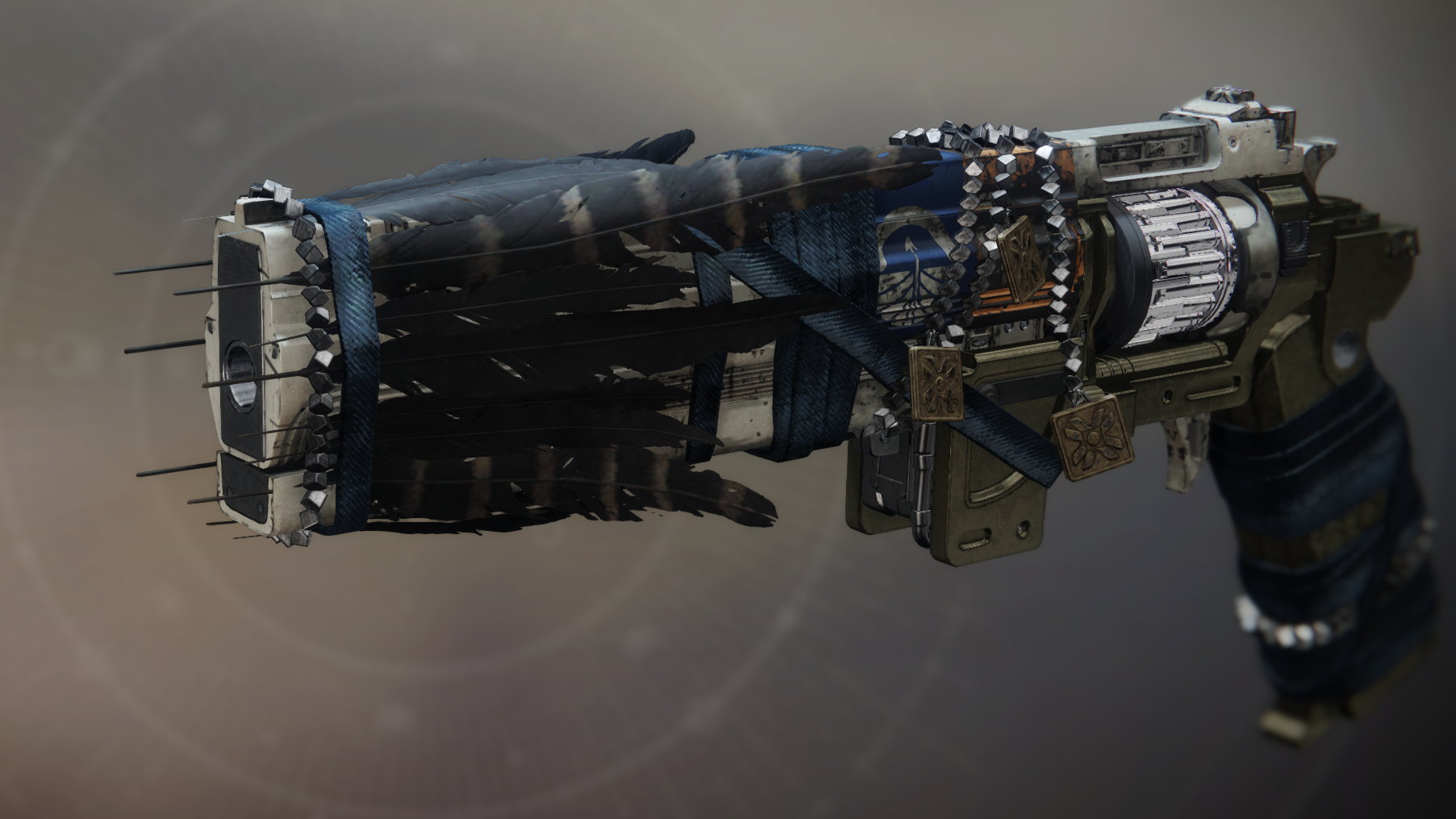 A special mention goes to Night Terror, which likely wasn't even originally a weapon. Any climbing axe can become a sword if you attach a blade with magic and a great deal of cord. 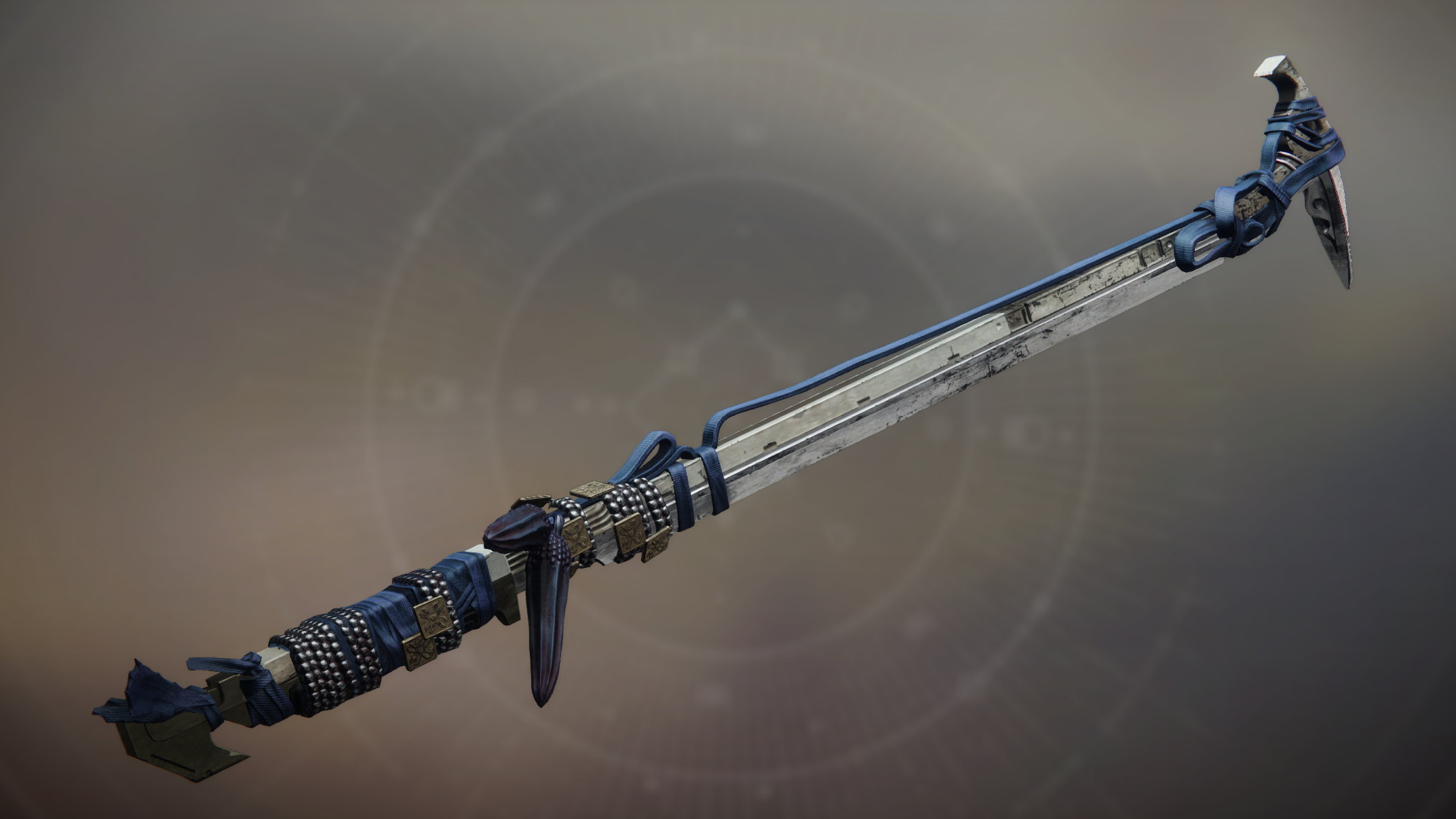 And there is something striking about the statement bangle strapped to the fusion rifle, Dream Breaker. 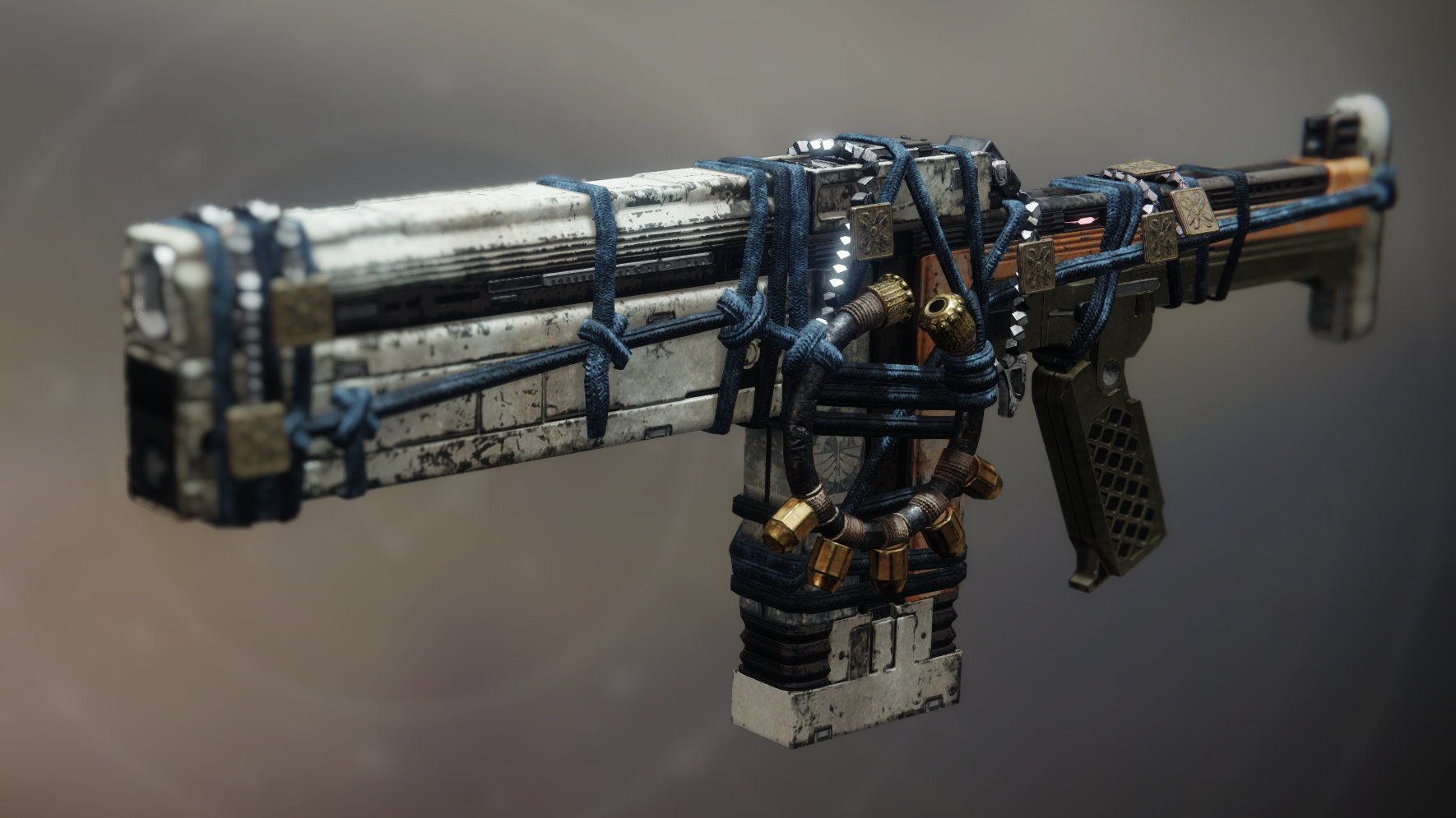 I haven't seen enough Dreambane rolls to get a good sense of whether the weapons are even that good but I'm certainly on the hunt for a nice Loud Lullaby.

Shadowkeep launched on Tuesday. The base game also went free-to-play then, offering a gert big lump of MMOFPS for free. It's all on Steam now.