If you've ever made cautious forays into the online communities for Stardew Valley, you will know they are intimidating and inspiring in equal measure. Players post screenshots of their megafarms: "Autumn farm, year 6," they'll say, alongside a photo of vast fields of pumpkins, the space usage finely tuned to produce maximum yield for minimum effort. "Summer Year 4," another will announce, showing a holding with actual dozens of beehives (when I don't even have one) - and that's just one small part of their whole farm.

Buying, planting and harvesting that amount of stuff seems an impossible mountain for me, with my small patch of green beans and potatoes, to climb. But the communities are also very quick to offer advice and help, as one might expect, so perhaps one day I will be able to do my own megafarm post. In the meantime, I am awed by both the size of one r/stardewvalley user's farm, and the beauty of their solution to a recurring problem.

A lot of Stardew Valley advice relates to time-saving. For example, if you plant a tree of each type just by your farmhouse, and tap them for resin/syrup/tar on the same days as you tap the others on your property, you'll know when all of the tappers are ready for harvesting, and won't have to run over and check all the time. Neato!

Animals need grass to eat, and some items can be placed over a square of grass so that animals can't eat it, but it keeps generating new squares of grass for them. Grass is, in the early stages of the game, pretty annoying, because it seeds itself sort-of-randomly across your farm, unless you keep it fenced in.

But Reddit user "hslsoocjen" used grass to their advantage, however. They have what they describe as an "irregularly shaped" field, and kept forgetting how many seeds they needed to buy to re-sow it. Their solution to this was both elegant and sledgehammery: 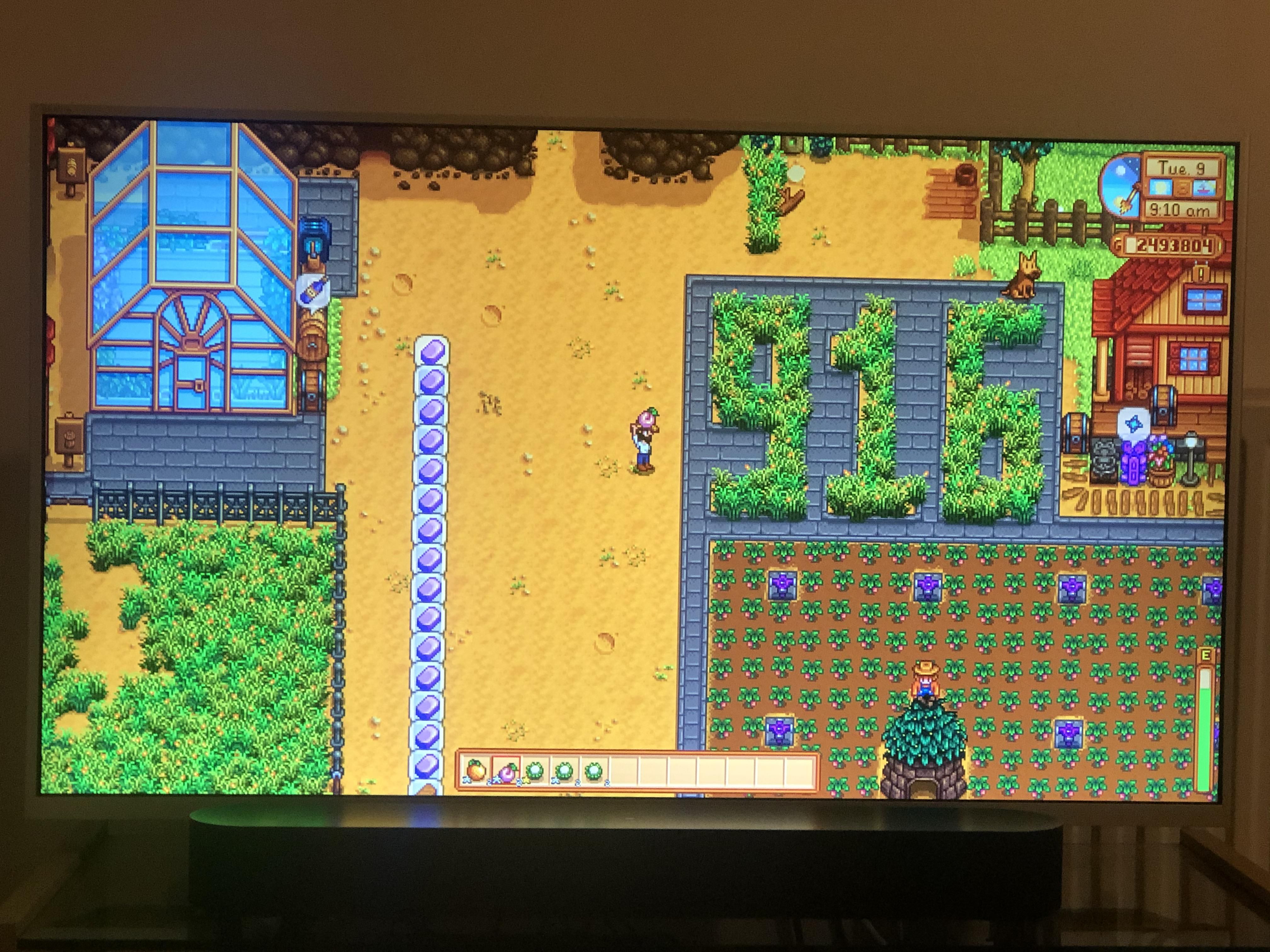 Similar to how you would grow funny shapes in cress on wet cotton wool when you were a kid, hslsoocjen has built, in characters larger than a barn, the number '916', by plotting it out in negative space between path tiles. The dirt filling the space has grown some lush grass for extra emphasis, and hslsoocjen will never again forget how many seeds to buy.

(Also, 916 is apparently the area code for Sacramento, if you clicked through to Reddit and, like me, wondered why so many comments were about Sacramento).

hslsoocjen has renewed my determination to get a farm that holds almost a thousand (!) crops, as well as my awe at what people come up with when vidya games give them the tools. It's not for nothing that Stardew Valley appears on a lot of our bestest best lists, including our list of best RPGs, our list of best management games and our list of best co-op games.