I’ve spent some time with Twin Mirror, Dontnod Entertainment’s upcoming adventure game in which you play as a fella called Sam. Sam, an ex journalist, has returned to the sleepy town of Basswood to attend his friend’s funeral, and he latches onto the possibility that his mate may have been murdered. The game centres around uncovering the truth. If you’ve played the likes of Life Is Strange, it’s a similar narrative-heavy, click-a-bit, watch-lots-of-cutscenes experience.

From the outset it is made clear that Sam struggles with his mental health - he takes some pills to keep himself in check on the way to the wake, which is a sure fire visual shorthand for said struggles. This is a topic that has not always been handled well in games (like how every game adapting a Lovecraft property has to have some kind of sanity metric). But because of Life Is Strange, Dontnod have a reputation for approaching difficult topics with some nuance. I thought that maybe they'd be able to whip together a thrilling story that tackled mental health with tact. But nah. My hopes were dashed pretty quickly.

Twin Mirror’s main schtick is Sam’s ability to enter his Mind Palace, a sort of alternate reality that represents his inner thoughts. Visually it’s like a cross between the Void in Dishonored, a glassware store, and the Arctic. Very calming. As you gather evidence and interact with people you occasionally pop into this world so Sam can piece things together.

What ensues is not meant to be hilarious, but I couldn’t help but laugh.

And, it turns out, you’ll be cast into this Mind Palace when confronting Sam's mental illness, too. There’s this bit where Sam wakes from a heavy night of drinking that, combined with the pills he’s taken, means he can’t remember a thing from the evening. He heads into his bathroom, notices a bloodied shirt, and begins worrying about what he may have done, eventually sliding into a full blown panic attack.

What ensues is not meant to be hilarious, but I couldn’t help but laugh. In the sequence, a half naked Sam sprints down a dark corridor away from a shadow that’s - hands up if you know the answer already - himself! Well done to those of you who guessed this, you may have a gold star.

The ridiculousness ramps up even further, you’ll be pleased to hear. Mirrors (because the game has the word mirror in it and it’s about confronting yourself) start popping up in Sam's way, saying stuff like "Give up" and "There is no hope for you". These you dodge. They are the bad mirrors. But some say something like "Steady Yourself" or "Focus". Sam is supposed to hurl himself through these. A textbook example of calming yourself down.

Eventually the mirrors all start moving and it gets tougher to weave through them. It felt like Jonesy from Fortnite was having a nightmare, and I was trapped in it with him, which speaks to how juvenile it felt for a representation of a panic attack. 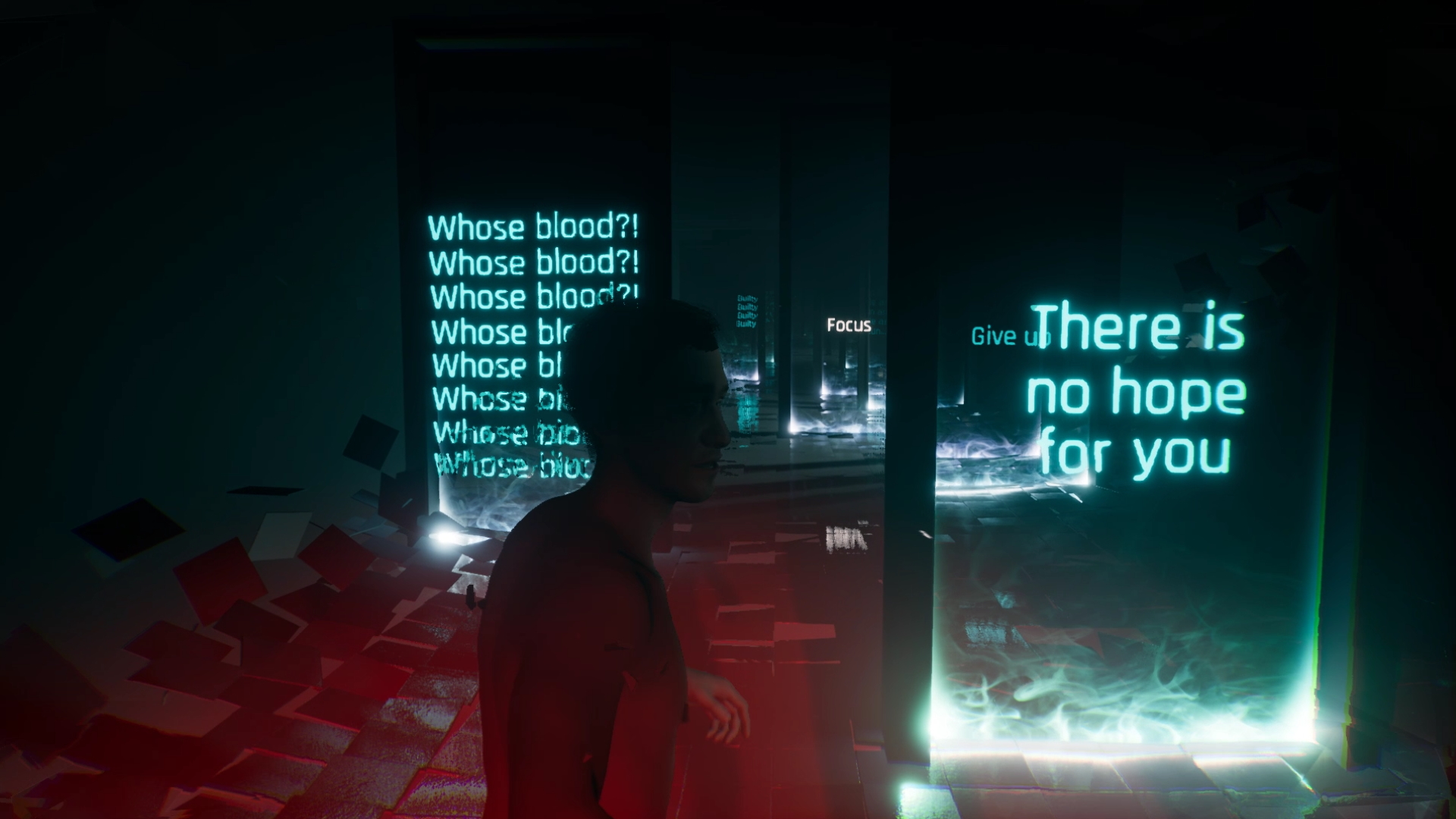 I don't have personal experience dealing with severe anxiety, but there’s an absurdity to the Mind Palace and Twin Mirror’s gamification of mental health that’s clearly not getting it right, here. I can appreciate that Dontnod have tried, but if I’m someone who wants to deepen my understanding of what it’s actually like to live with anxiety, I’m leaving with a gameplay section that’s only slightly more adult than Subway Surfers emblazoned in my mind.

I think that juxtaposition of theme and form is the reason why it’s so funny to me. It’s like Dontnod have assumed I’m five years old and packaged Sam’s issues up in a "Baby’s First Panic Attack". I suppose spoon feeding me extremely obvious metaphors does ensure you get your point across, but it doesn't take into account the absurdity of having a grown adult sit on a high chair. I'm expected to watch Sam dive headlong into mirrors in a strange dimension and understand this to be what a panic attack is for this man? Of course, there’s no malicious intent from the devs. Twin Mirror has just fallen into the trap of tackling complex issues through the very serious medium of, err, a simplified minigame.

It feels like Dontnod’s failure here is a lack of trust. All these metaphors tell me that Sam’s having a panic attack, sure, but not the reality of what it's for him like to have one, or manage anxiety on a daily basis. If I asked someone to describe their own experience, I don't imagine they would say, "It is like running through a hall of mirrors." Dontnod could have achieved the same effect as this sequence if Sam had just said "I am having a panic attack" out loud. They didn’t even trust us with a more complex or meaningful metaphor, let alone to sit patiently and watch Sam manage his anxiety in the real world, without the silly Mind Palace.