If you click on a link and make a purchase we may receive a small commission. Read our editorial policy.
This is part 2 of Nate gets good at AoE2, a series in which Nate attempts to get really good at Age Of Empires 2, via the monstrous crucible of ranked online multiplayer.

Last week, after a lifetime of timidity, I finally bit the bullet and played my first competitive ranked game of Age Of Empires 2. Needless to say, I got battered. A big medieval boot stomped my fingers from the first rung of the ranked ladder, and I splashed back into the mire where I belonged. But after a week licking my wounds, practising build orders, doing maths with 14 wiki tabs open, and archer-rushing my way through endless 1v1 comp stomps, I came back for another go.

This time, my arrow-spamming, catapult-happy Ethiopians were facing off against the Japanese, on the map known as GOLD RUSH. As its name suggests, this map is all about fighting for control of gold deposits, almost all of which spawn on a massive hill in the middle. A massive hill... covered in tigers. Aggressive map control would be even more crucial here than it had been in the Black Forest, while tigers would become suddenly, and drastically, relevant. But had I learned my lessons from my first defeat - and could I seize my first win on the back of it? Draw your reading swords, armchair knights, and charge on to find out:

(As ever, the screenshots that follow are taken from the replay of the game, so there's no fog of war, and we can observe everything as if we were looking down from atop Olympus itself. I'm the red team, while the blues are my enemies.) 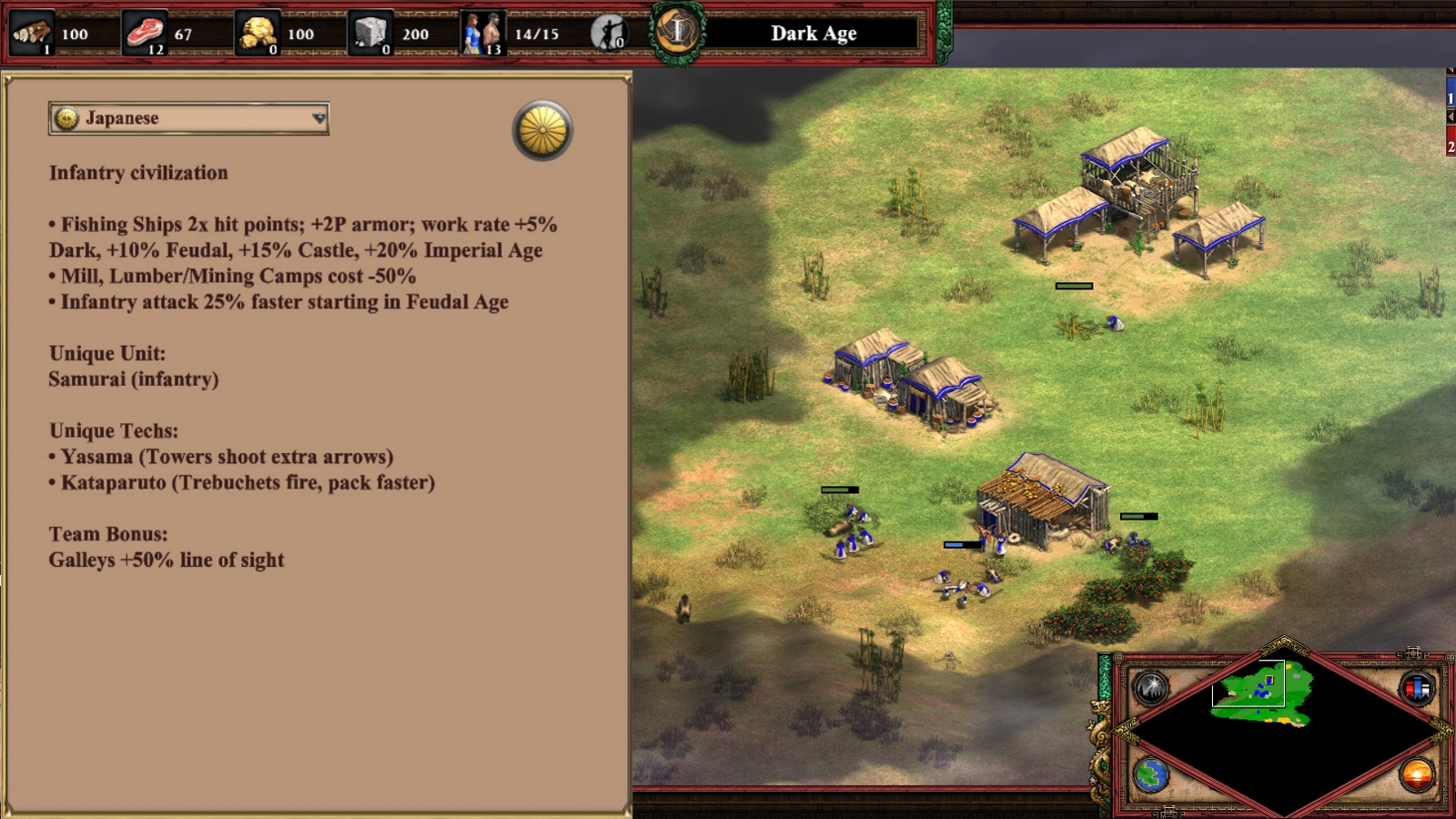 Blue picking Japanese was good news for the most part: the civ's implausibly hench fishing boats would be of little use in this landlocked map, while their fast-fighting infantry would go down like candyfloss in water before my massed arrow lads. Still, Japan's cheaper gathering buildings would give Blue a potential economic edge early on, and if they managed to take the high ground and keep it into the castle age, their fearsome tower upgrade and samurai-spewing castles would probably seal my fate. I'd have to play this one aggressively.

I certainly got off to the better start, according to the replay. As you can see here, Blue had 12 villagers on food before they created a sole lumberjack, which sounds sensible, given you need to hoard 500 food to get out of the dark age. But the holy build order (at least, the one I've been taught) says otherwise, and I obeyed it to the letter: 6 villagers on sheep (actually it was geese, on this map), then 4 on wood, an eleventh to lure a boar, three on berry foraging, and another boar lurer as the fifteenth... it goes on. And since I stuck to the path, things unfolded well enough. But I did wonder what would be going on out there in the dark, on the other side of the hill in the blue encampment... 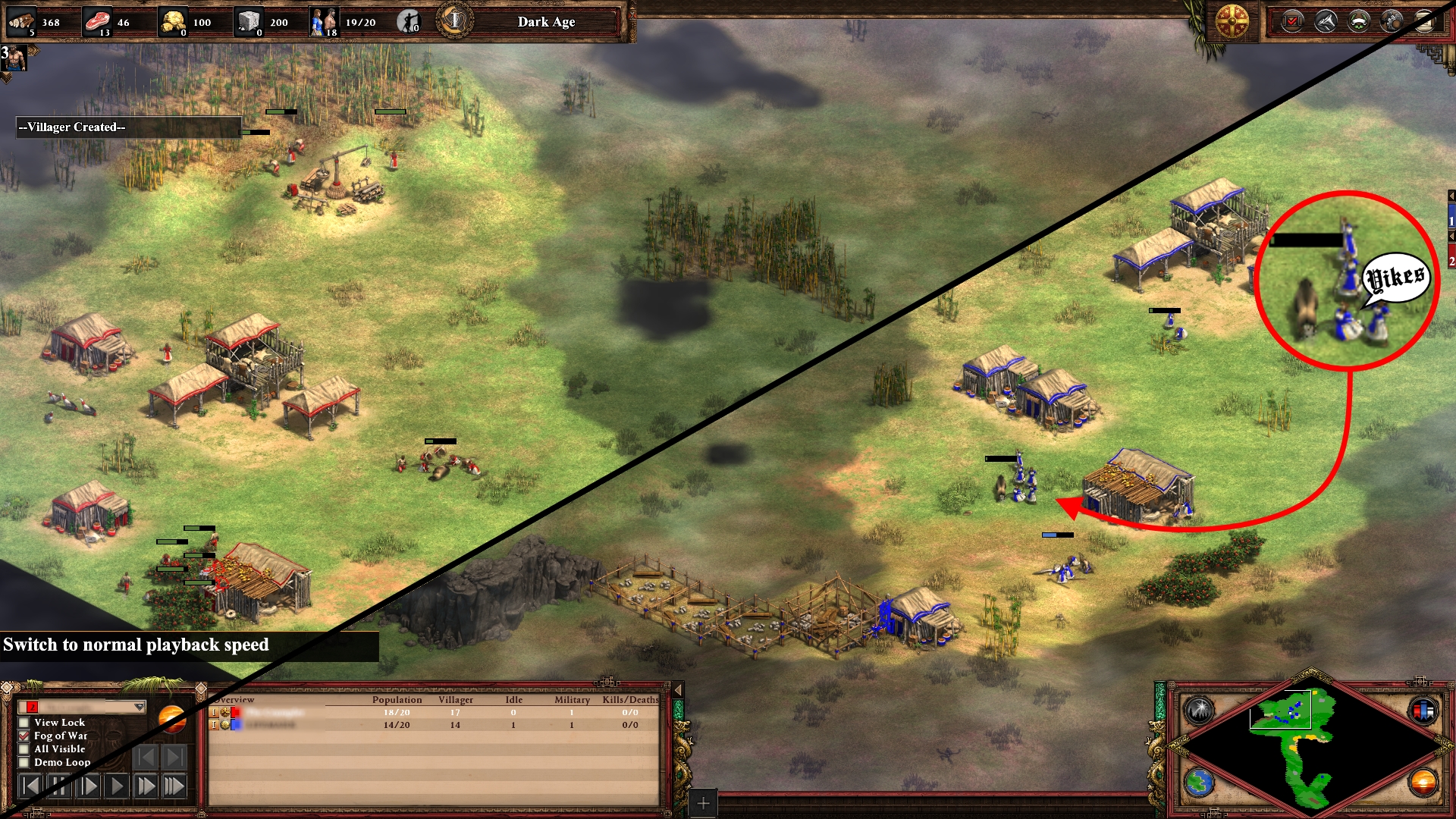 Chaos with Ed Miliband, that's what. Blue keeps getting "housed" (forgetting to build homes to increase population limit), and is solving their housing crisis by building an actual wall out of houses. Meanwhile, their boar hunt has gone completely tits up, resulting in tabloid scorn as a bacon sandwich messily eats a person.

I’ve now got a 5 villager lead (although I'm about to get briefly housed myself), and although blue clicks up to the feudal age first, I wait and do it with a population of 23. Those extra workers, plus the Ethiopians' food-and-gold bonus for going up an age, mean I'm well rich when I come into Feudal, and easily overtake the Japanese head start on building a feudal-age military. Honestly, I would have held off on clicking up until I had 27 workers, so I could slingshot straight into castle, but I knew I had to get aggressive earlier than that, or I would risk missing out on securing the all-important centre. 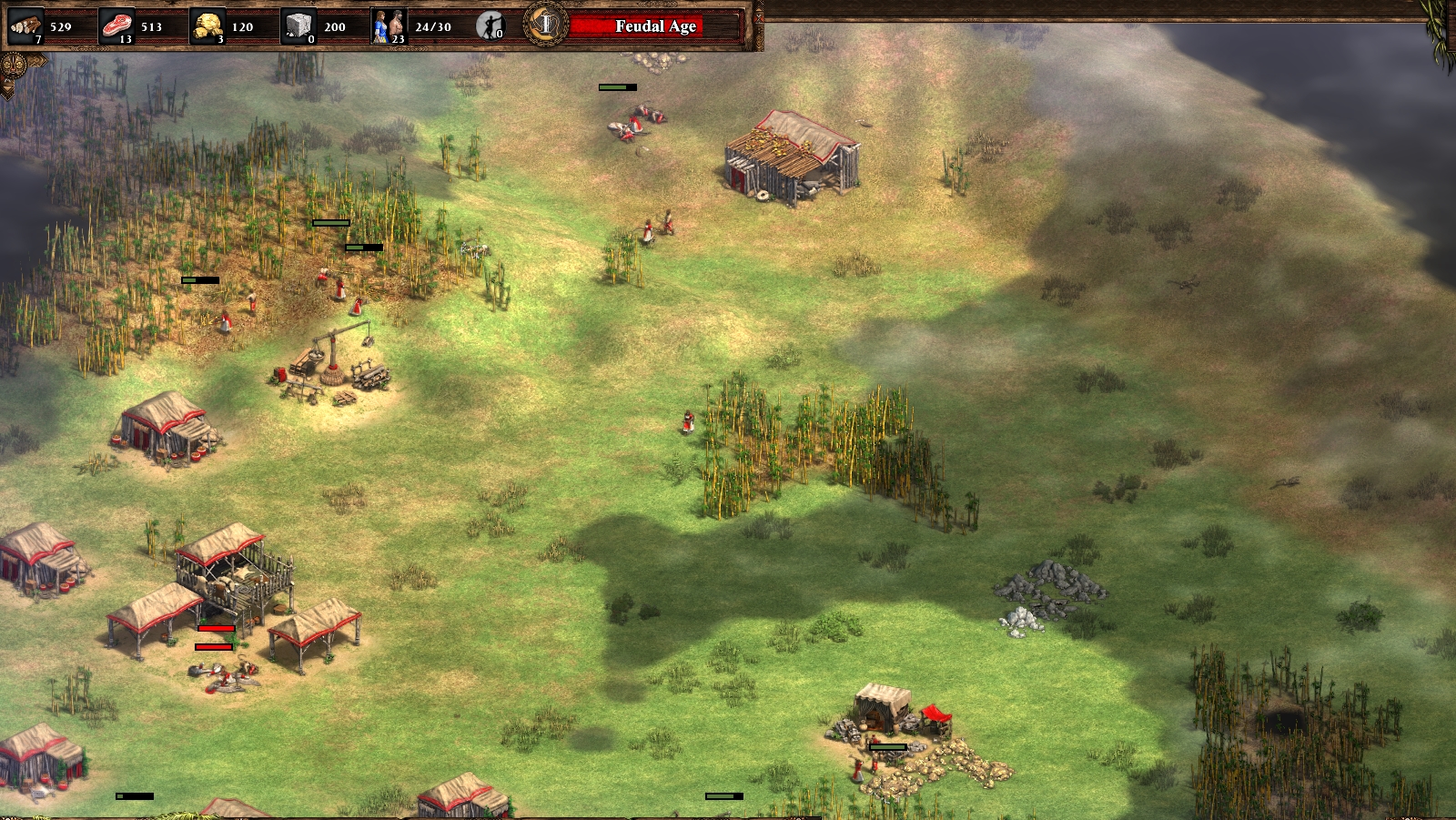 Here I am about to hit feudal, and as you can see from the resource boxes at the top left, my extra villagers were concentrated on hackin' logs and diggin' gold, in order to fuel an immediate archery push, while I'd also saved wood by foregoing farming and transfering my boar-hunters into ibex hunting (top centre) instead. But what had my enemy been doing in the time they'd already had to luxuriate in the technological wonders of feudalism? 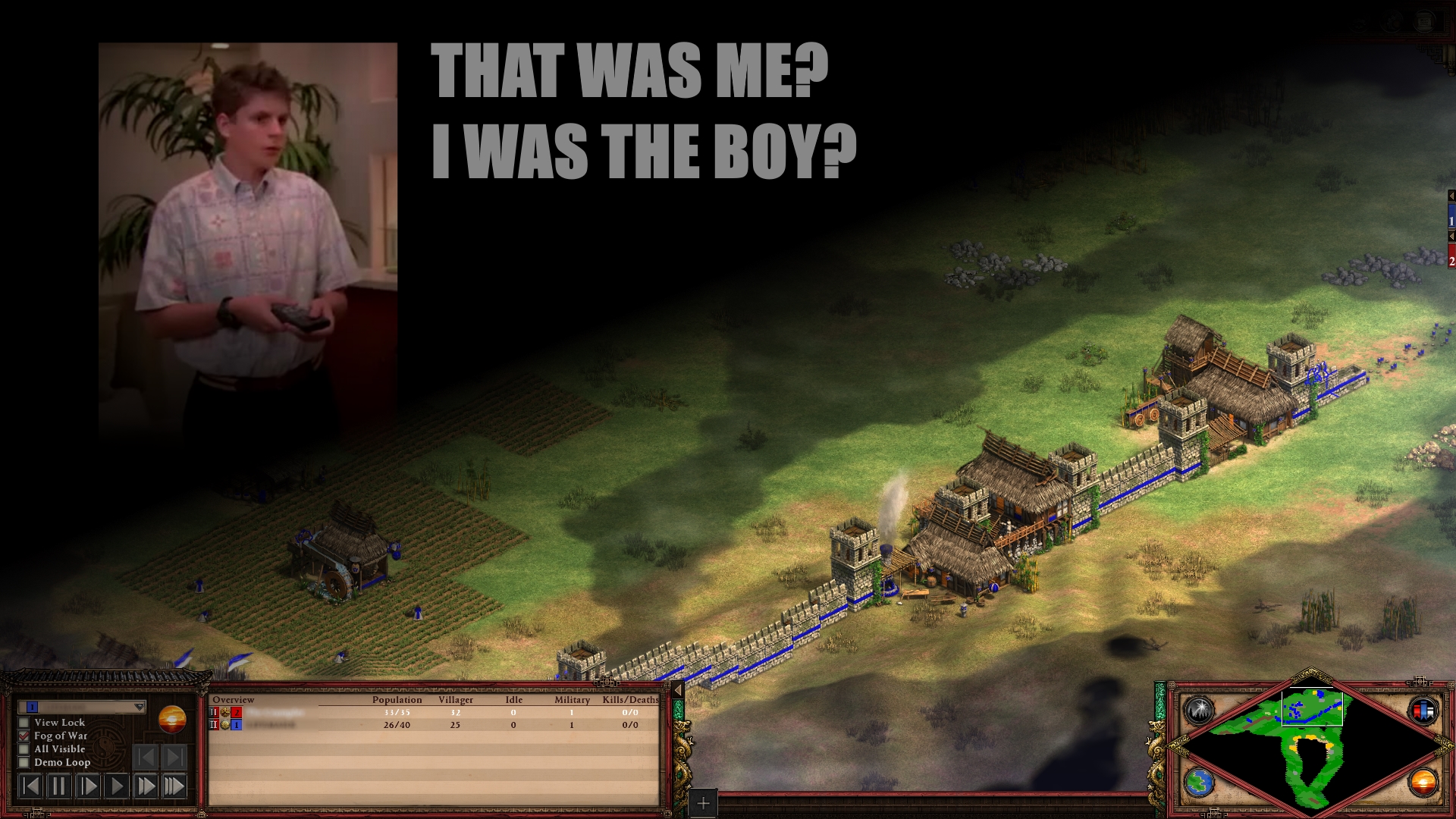 As the replay revealed, Blue had indeed got an archery range up themselves - but rather than building up the army I'd feared, they had concentrated on further walling in their corner of the map, as if they were nervous of something. Indeed, it was only when I looked at the map from their point of view - their scouting had been pretty limited, so they had no idea where my base was - that it struck me. For all my heart had been thumping, remembering my trouncing in the black forest, this time, my opponent was scared of me. I was the unknown figure in the dark; the potential pro-tier, gatling-APM'd AoE2 lord. I was the boy. 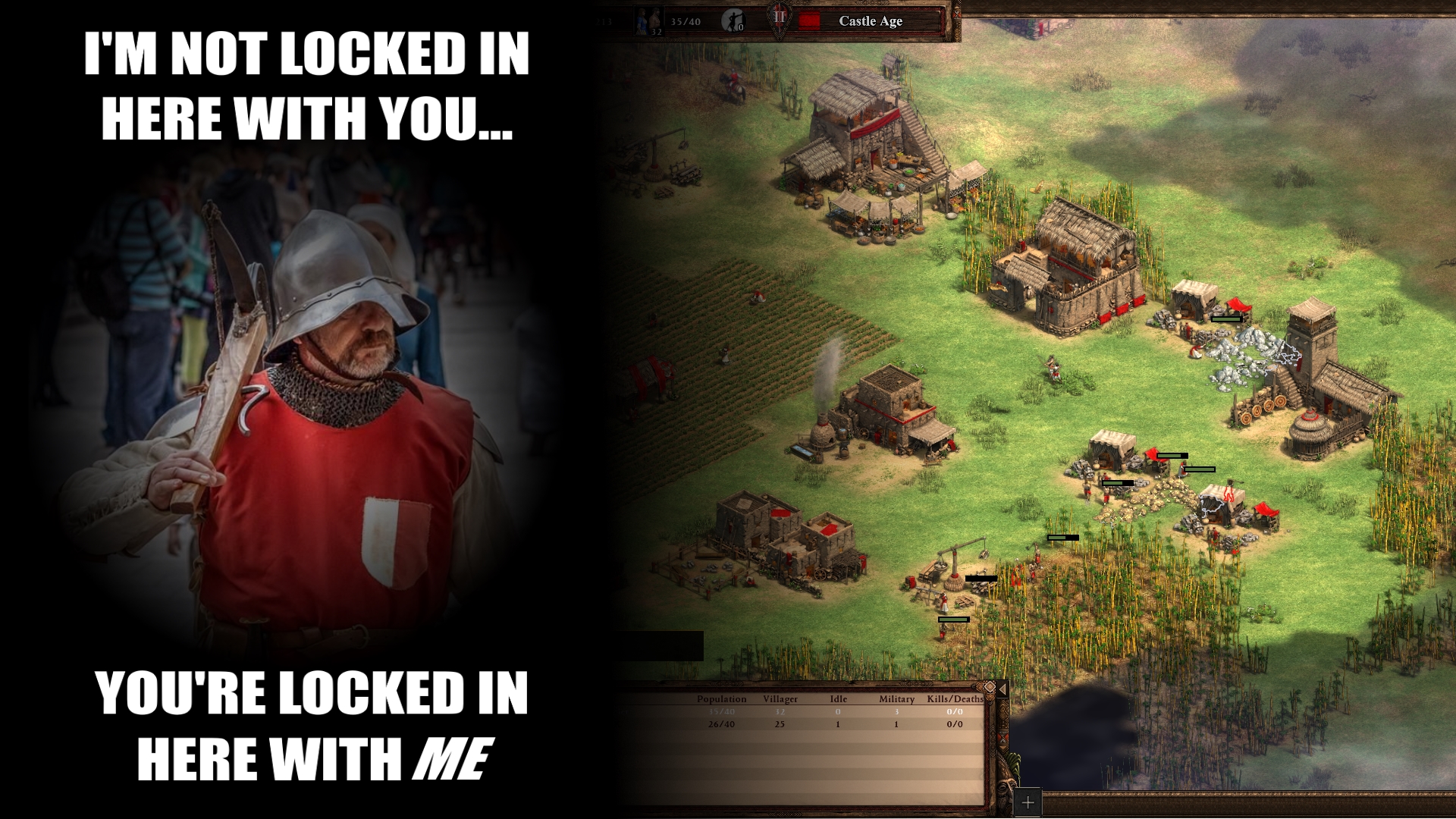 And the boy was not wasting any time. Even though I'd aged up with 23 villagers, those lovely Ethiopian bonus resources meant I was headed into castle age even as my first archers strolled out of the range, ready to head for the central hill. I even had the resources spare after ageing up to grab some blacksmith upgrades, ensuring my archers were as buffed up as they could get, the moment they took the field. Watching in retrospect, I feel a delicious sense of power as I see that - for once - I am the more aggressive player. 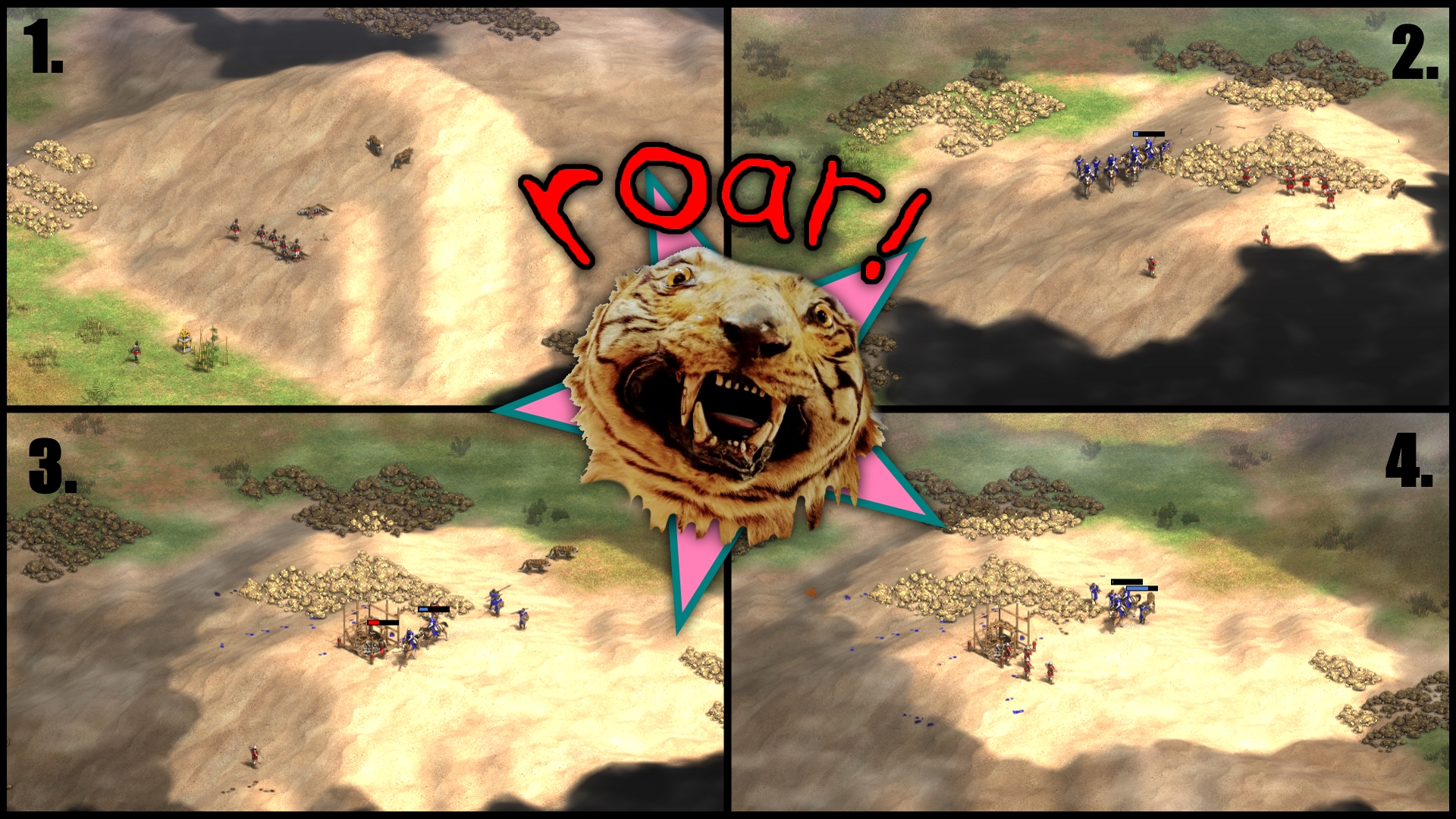 And now began the pivotal Battle of Tiger Mountain, a story in four parts: 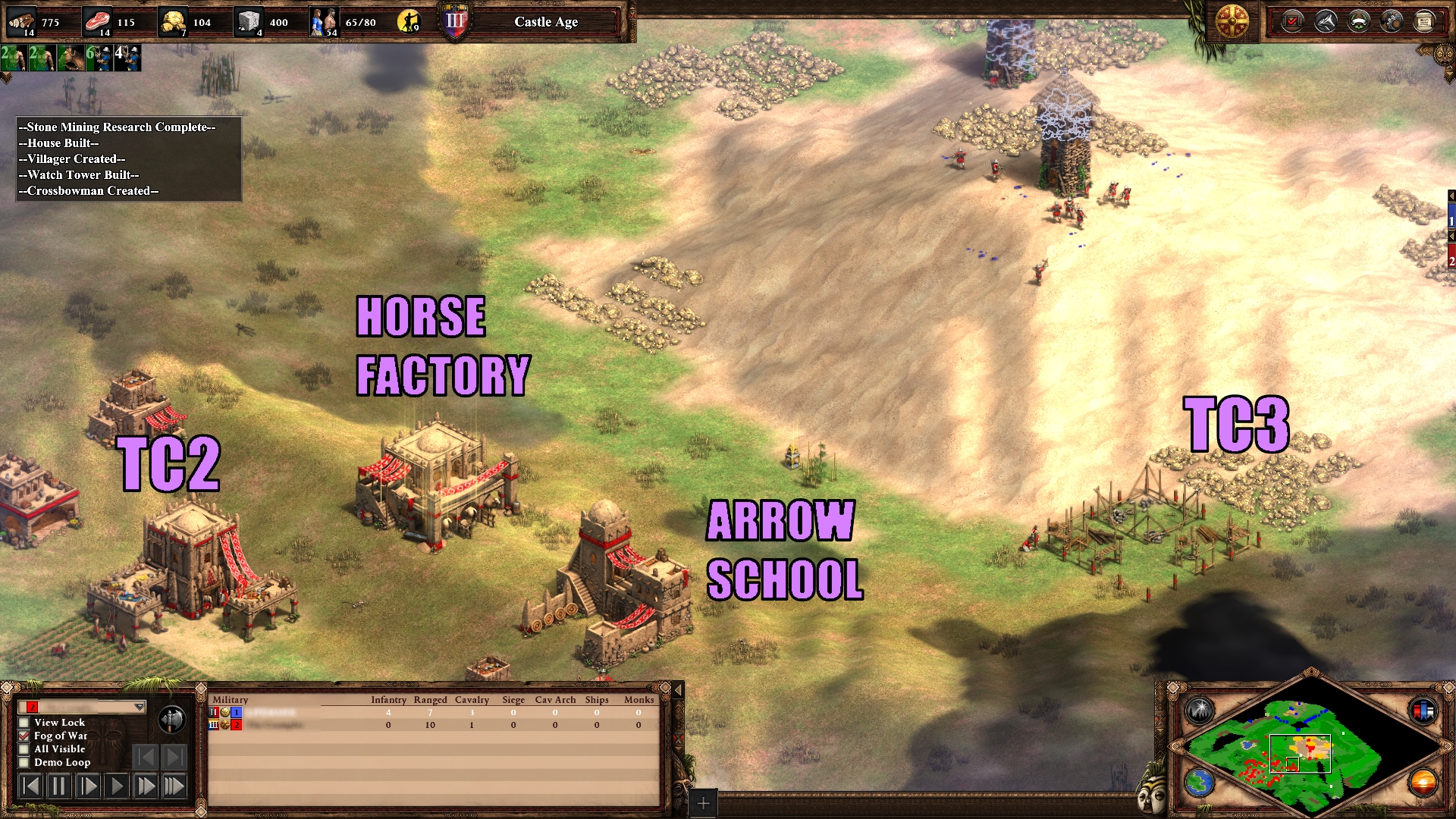 While these hillside skirmishes have been raging, I've not let myself get complacent. Remembering my experience in the Black Forest, where my initially triumphant archers were wiped out by an attack from mangonels, cavalry and massed skirmishers, I've made sure to diversify this time. Alas, despite the Ethiopians' immensely useful free upgrade to pikemen (infantry perfectly suited to dealing with horses and skirms), I have been a silly boy and elected to make a cavalry reserve instead. I've also started plopping down more town centres. (In other "silly boy" news, look at that idle villager count - once again, I let a load of hunters stand around too long after they'd gunished all the local ibex). 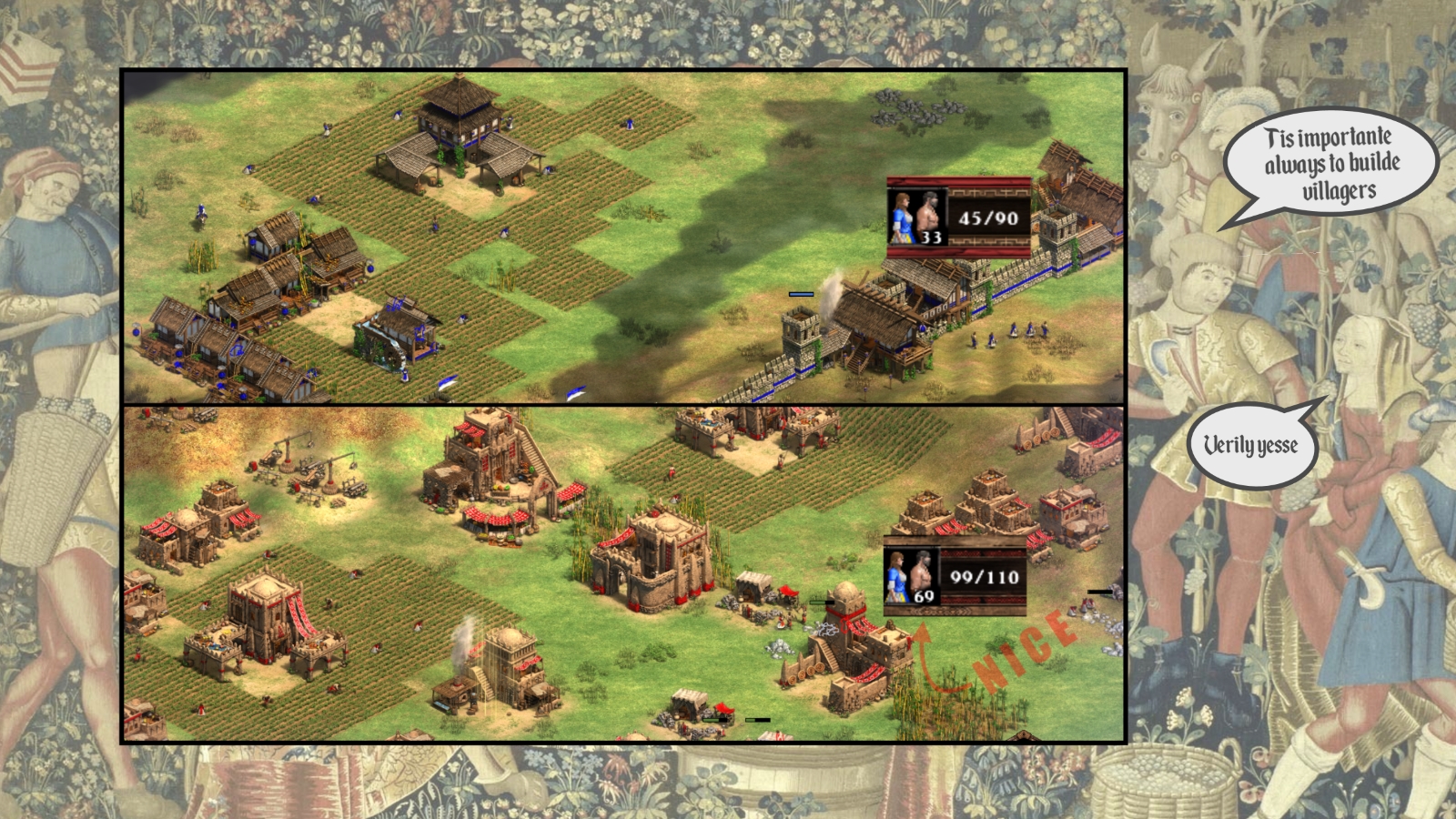 Those extra town centres of mine are where the most important fight of all has been taking place - the economic struggle. Because while Blue only has one TC still, I've now got three, all of which have been vomiting forth freshly-grown peasants to till farms, chop lumber and dig gold. Soon, I've got more than twice the civilian population Blue has, and therefore more than twice the income. In Age Of Empires 2, it's properly vital to keep as many town centres as possible creating villagers non-stop until you've got a hundred or thereabouts - if you don't remember to do this, you'll inevitably fall behind the opponent who does. 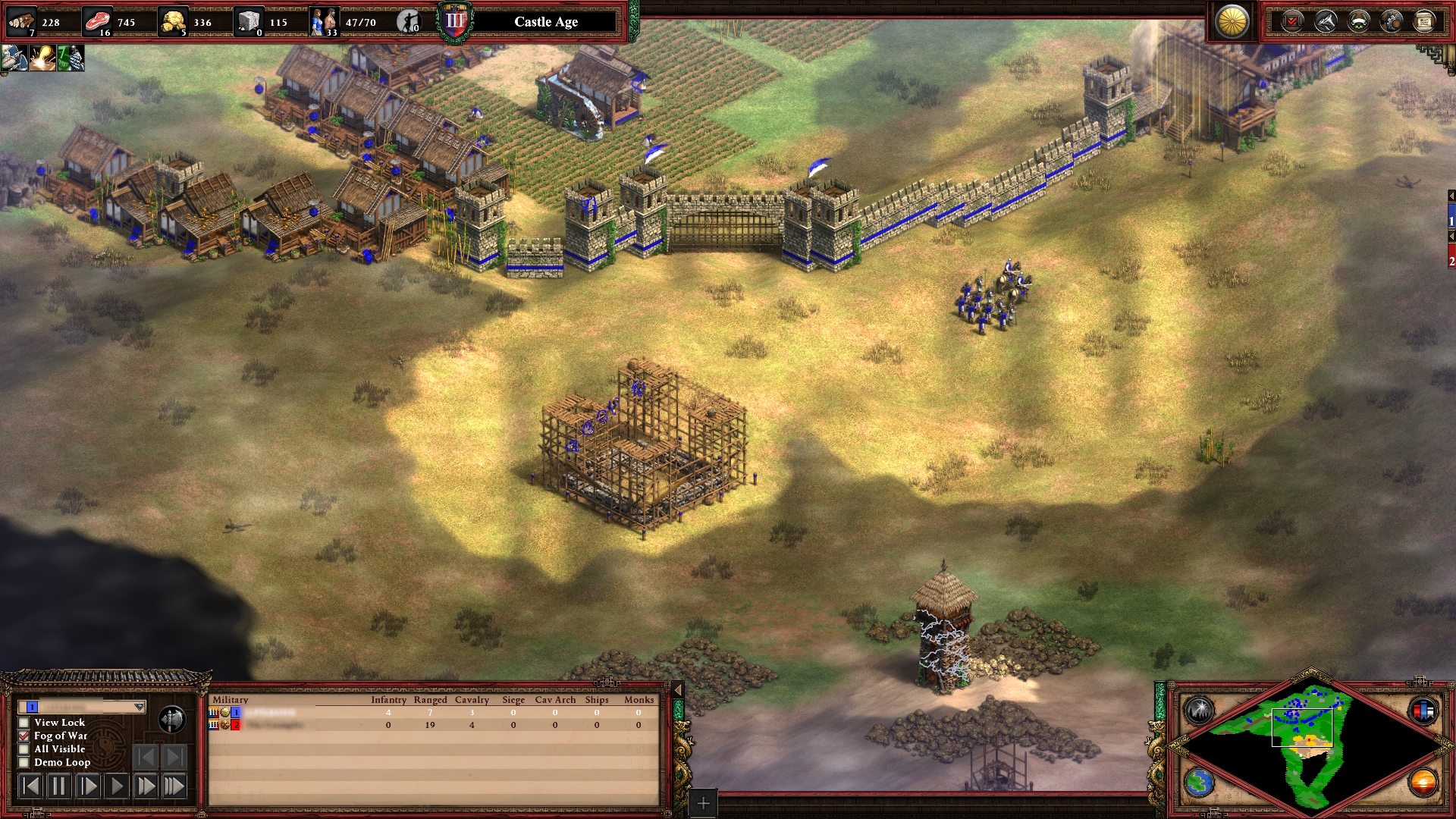 On the defensive, Blue starts building the game's first castle, just out of range of one of my increasing cluster of guard towers - my foe will be looking to build a siege force here to retake the middle before it becomes their only potential source of gold. 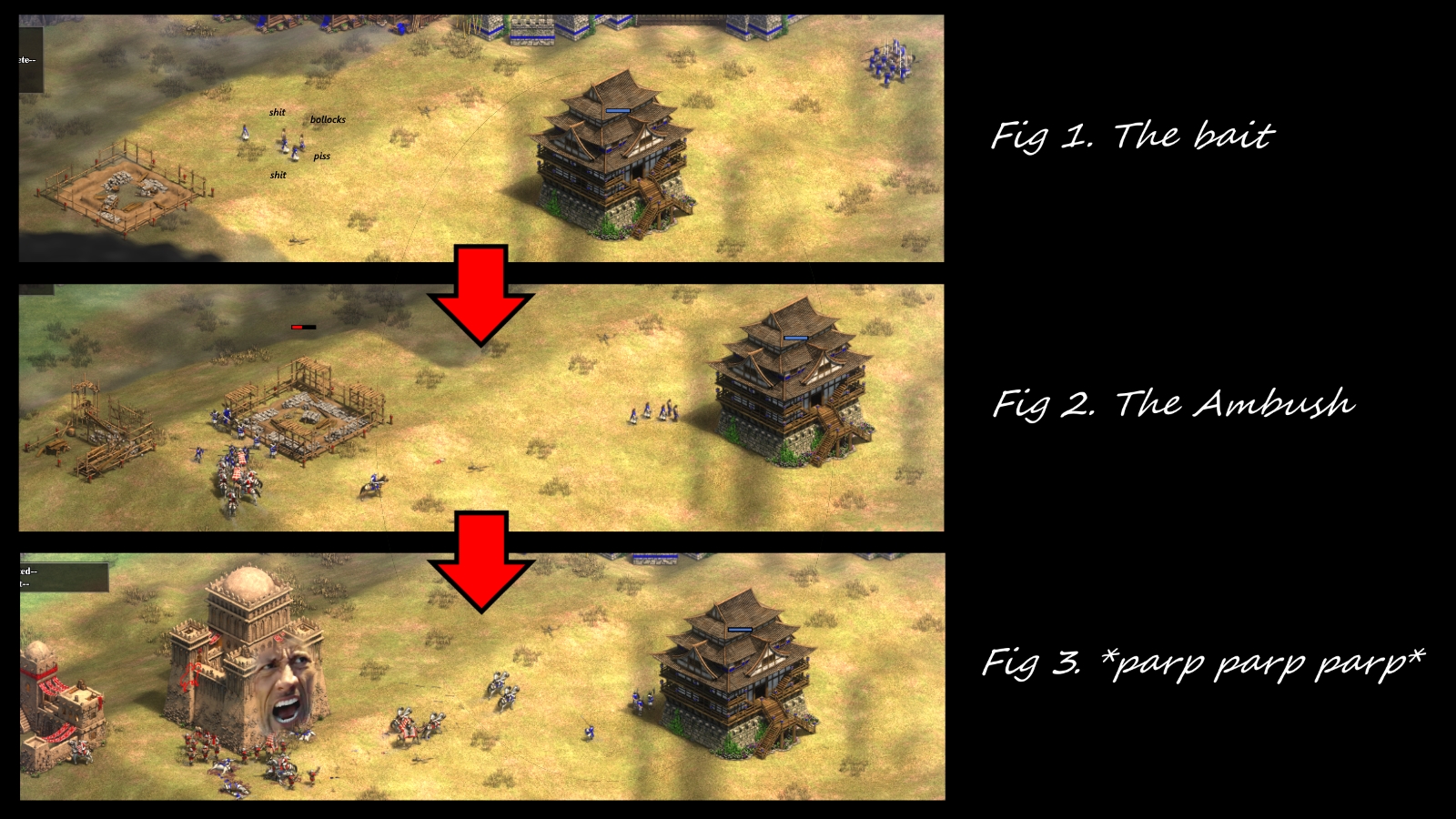 But I've got a dastardly trick up my sleeve to keep Blue on the defensive! Here you can see a group of Blue's villagers, moving forward to build another castle or soemthing, and freaking out when they see a couple of my own peasants beginning to construct a castle of their own.

They panic, and send in their army to kill the villagers - but of course they don't see my mass of knights and cavalry-killing camel riders waiting just off screen for this to happen. The ambush is sprung, but rather than fight it off, Blue is so scared of my castle that their knights try to awkwardly shuffle round my own, like blustering businessmen scuse-me-ing their way around a crowded commuter train, to get at the villagers. Only, in this simile, some of the businessmen are towering thugs in iron suits, and are raining sword blows down on their shuffling, muttering counterparts.

Soon, Blue's army is all but wiped out, and my reserve villagers scurry in from hiding to finish the castle. It goes up, and the last survivors of the Japanese cavalry are skewered with flights of arrows. I have chosen to superimpose the face of Dwayne "The Rock" Johnson onto my new castle in the image above, in order to reflect the triumph I felt at that moment. 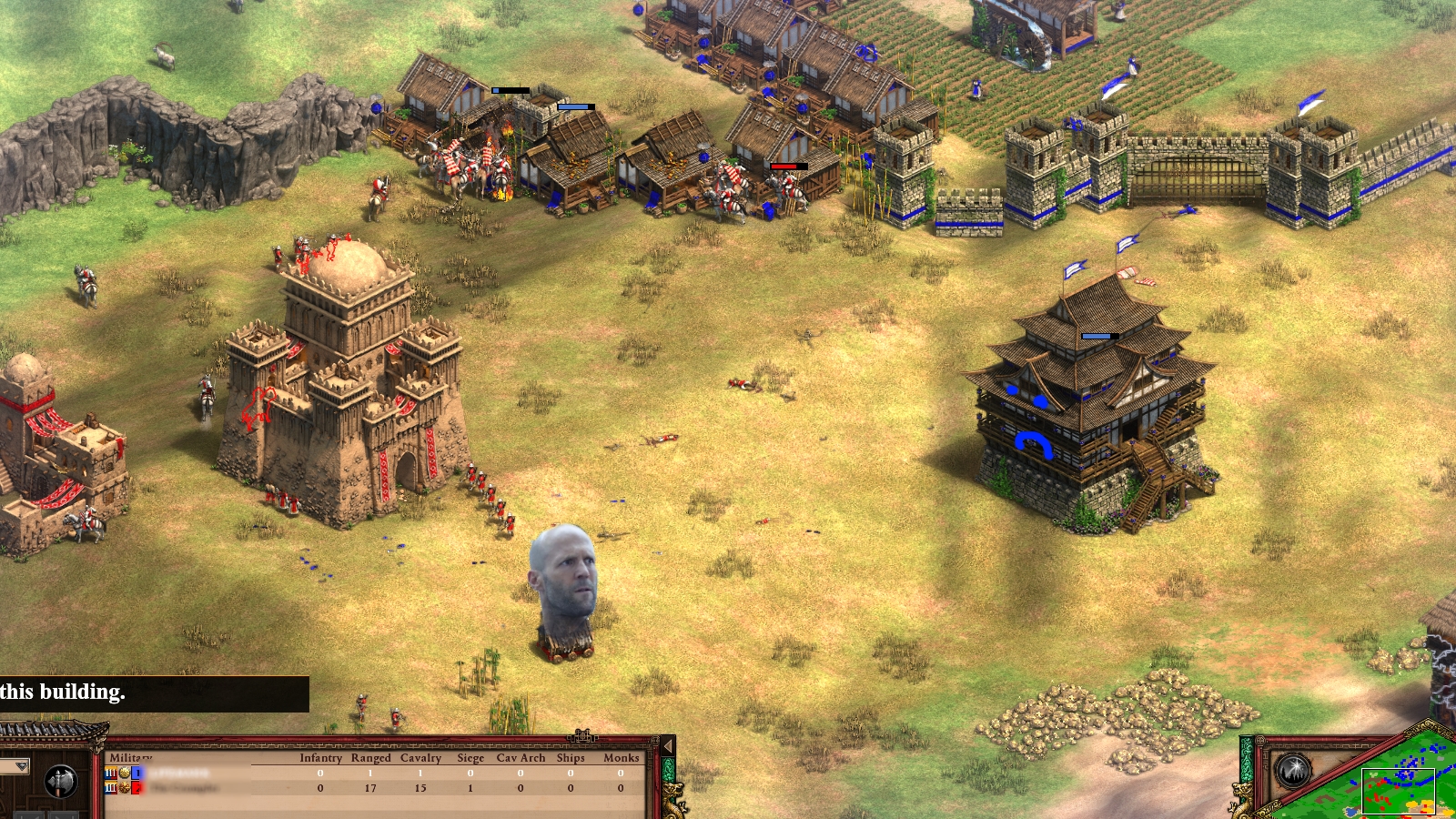 After that, Blue's spirit is broken. My knights rush to attack the weird house-wall around their home base, while at the same time, a siege workshop behind my lines starts producing rams to take down the Blue castle. My foe puts up a fighting attempt to stop the house-burning, and even tries to divert troops to stop the rams, but they can't do both. When the third ram becomes visible to them (I've put Jason Statham's face on it here to convey the sense of doom it must have evoked), they GG and throw the game. I've won! 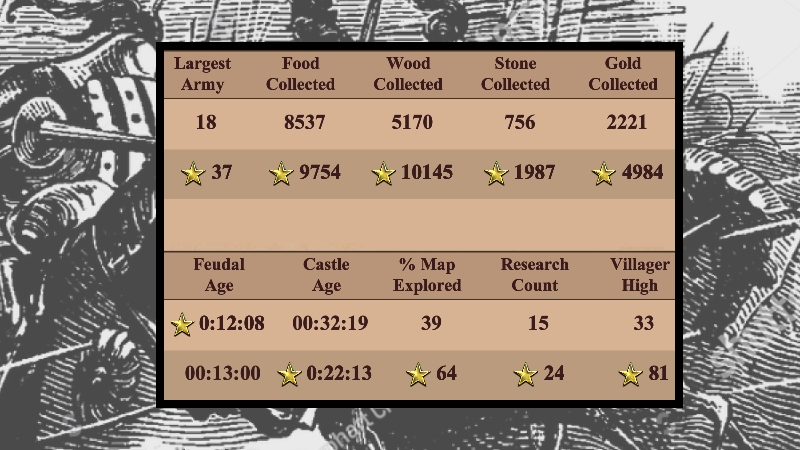 Stats! Here you can see just how game-defining my dark age villager lead - and my decision to hold off on going into feudal - turned out to be. It led to the wood and gold booms that allowed me to churn out so many archers, and which let me mount the decisive (but very wasteful, if I'm honest) cavalry feint which sealed Blue's doom. My opponent could still have done me in if they had boomed with multiple TCs as soon as they went into castle - but they didn't, and so essentially let me grow my early game advantage into a giant hammer made out of roaring, welded-together farm labourers. 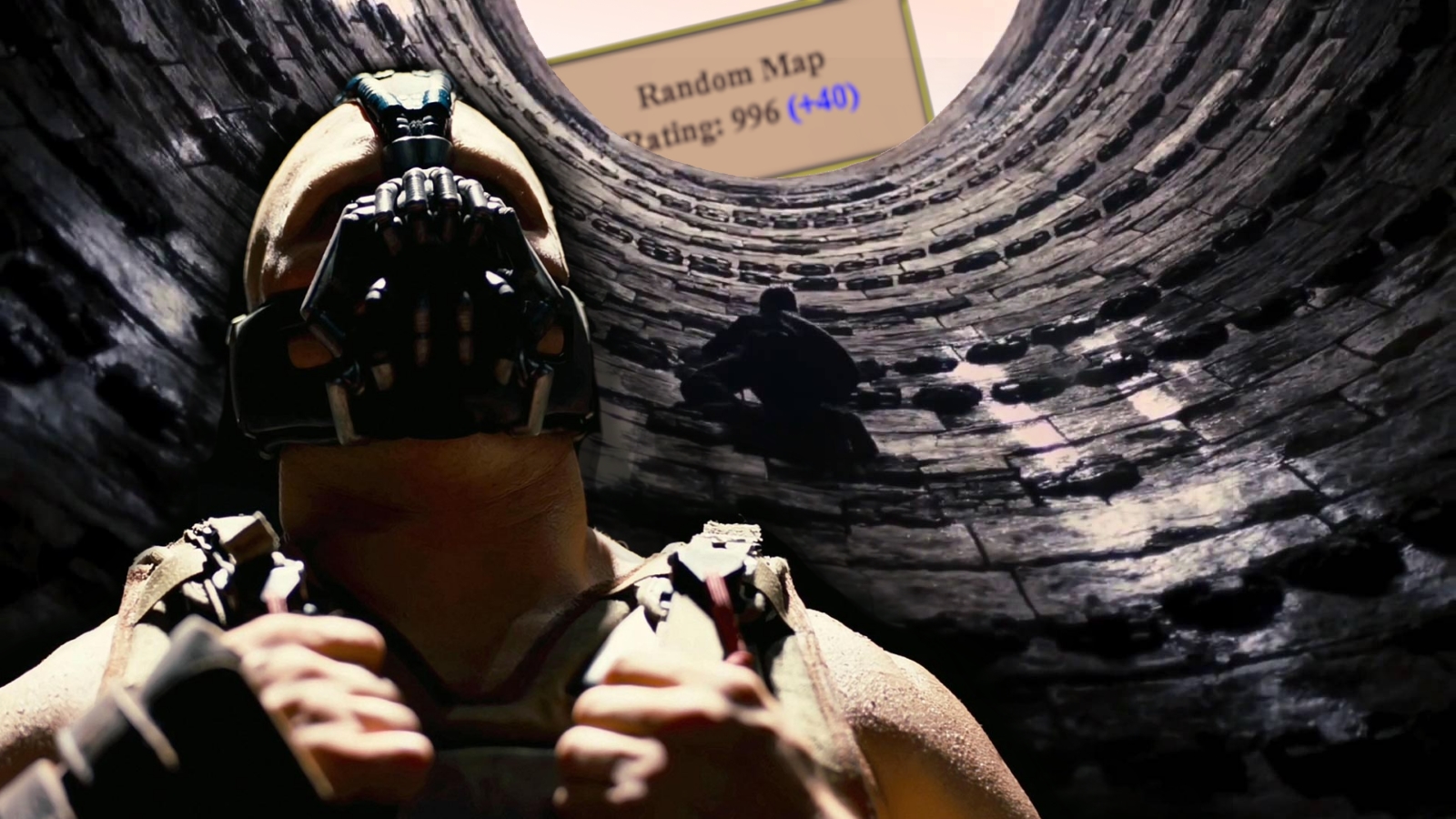 My first win, giving me an exact 50/50 win/loss ratio, and a ranking of 996, four points better than the one I started with. But what did I learn?

Things I could do better: