If you haven't heard of Alt.Ctrl.GDC, oh my gosh, are you in for a treat. Not the treat of actually going, because this happened two weeks ago in San Francisco. The treat of hearing about all the weird and wonderful games with alternative control schemes, including the Indiana Jones escape experience pictured above.

I had far too much fun.

I'll start with Tied Escape: Curse of Cortez, because it was both the first and best game I tried. I roped ex-Shut Up and Sit Down board game superstar Paul Dean into joining me, and we were tied (well not really tied, obviously) back-to-back against two chairs. That meant only Paul could see the screen displaying which buttons we had to press in order to escape. The buttons, brilliantly, were all on pillars that sat just out of leg range. We had to do that thing in movies where you kind of jump at the same time so you can move forward an inch, except you can't properly jump because you're tied to a chair, you idiot.

I was grinning from ear to ear for the whole three minutes it took us, even though I was wearing jeans with holes in them that wouldn't have been exposed in any other situation. Alice Bee later told me they looked cool, but I'm pretty sure she was just being nice.

[Okay, he's making it sound like they were on his crotch or something; they were near the hem on the end of the leg. His heel had worn through - ed.] 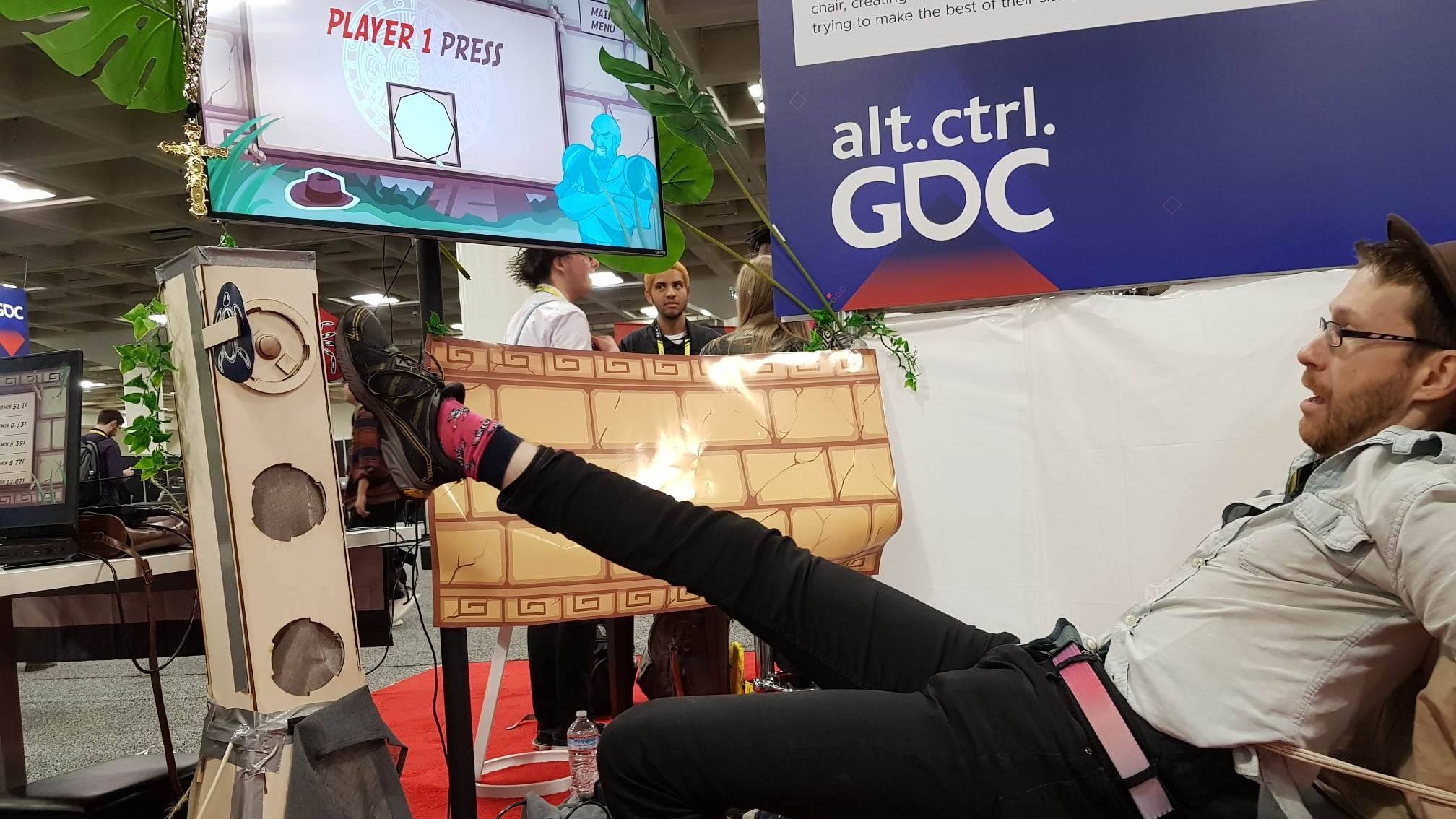 After gratefully accepting two cups of water from the developers, I spotted a couch with glowing lights and ran off towards it with Paul in tow. "HELLCOUCH", the sign read. "HELLCOUCH: A Couch Co-op Game." I'm not supposed to capitalise game names unless they've earned it, but HELLCOUCH is about performing a demonic summoning ritual using your own and two other people's bottoms. The ritual is both elegant and simple, requiring you to just sit down when you see red lights and stand up when you see blue.

Paul ensured there was video evidence.

We didn't have a go, but we did briefly ogle two people playing Guitar Wizards. It's Guitar Hero by way of wizard duels, where two players launch lights at each other over a glass-topped table packed with strings of LEDs. It's like if Harry Potter and Voldemort had settled their differences by jamming. 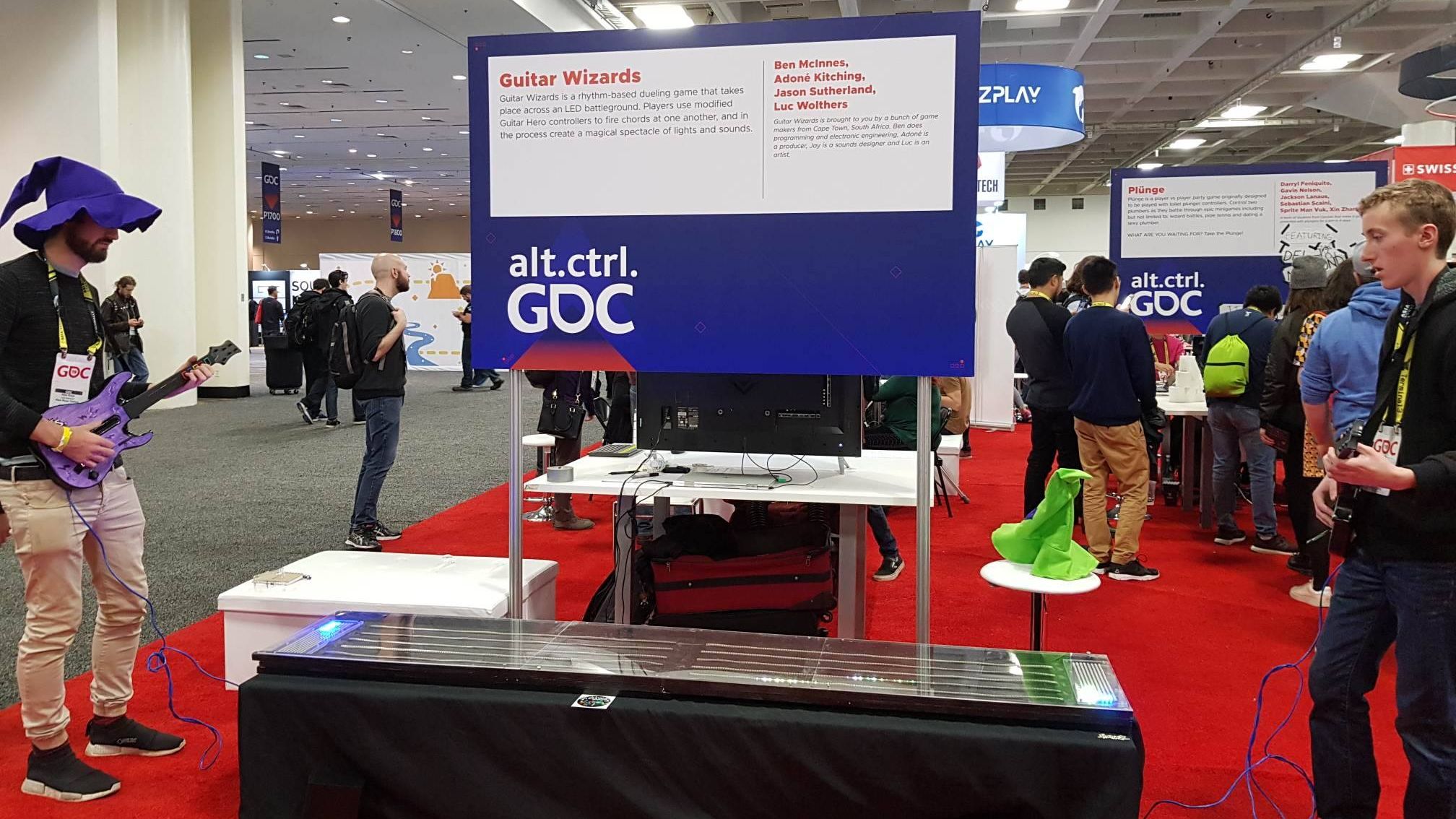 I wanted to stick around to see if the man who hadn't bothered putting on the hat would lose, as he deserved to, but I also wanted to clamber up walls as a chicken. So then we did exactly that in Ruins Climber, a game where you each pilot a chicken by frantically pulling on a rope. There were obstacles to dodge, either by pressing a button or yanking the rope to one side. I thought I'd won, but it turned out I'd counted my chickens before they'd successfully scaled 100 metres of ancient stone ruin. 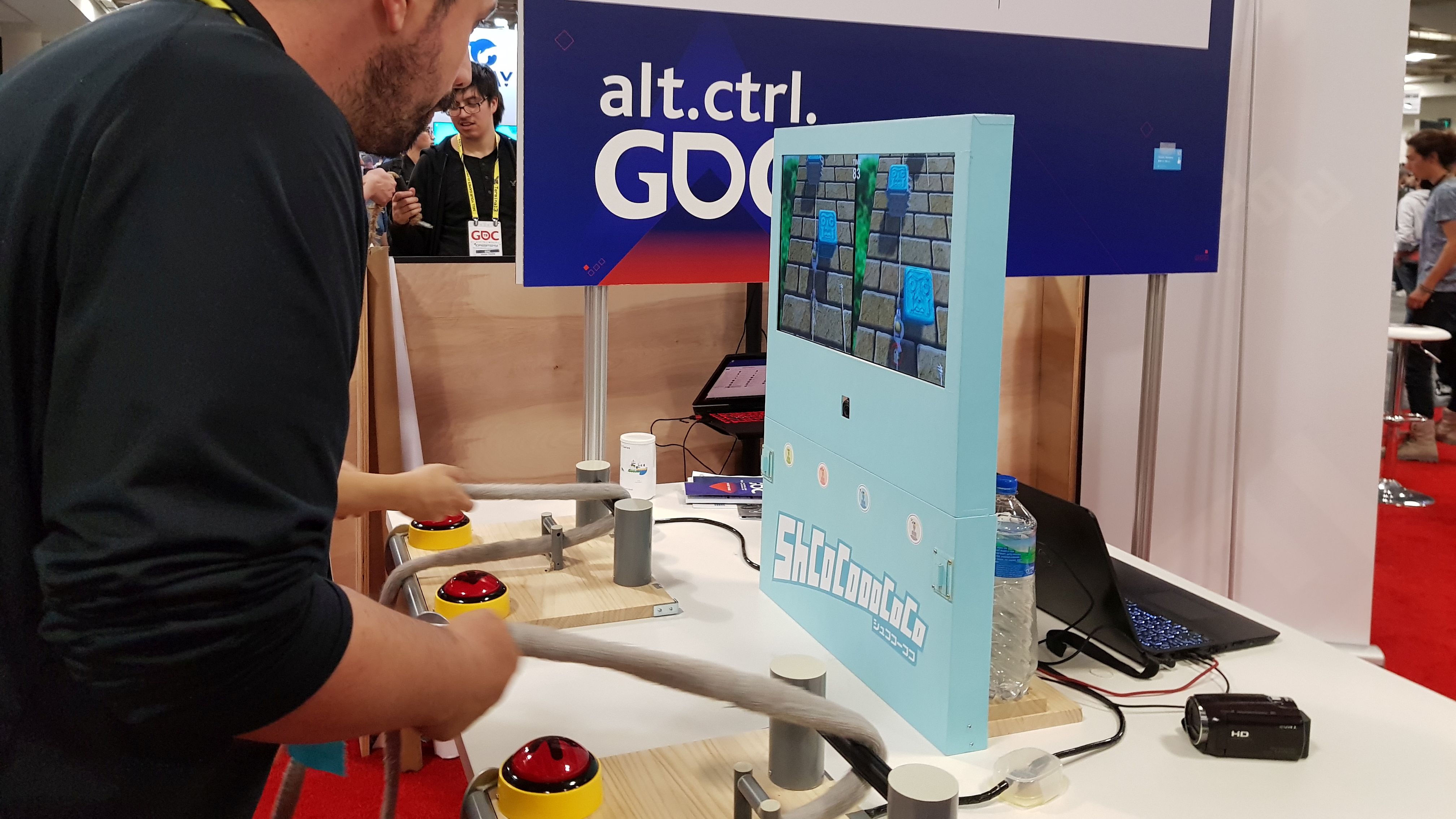 Victory went to Paul's head and he buggered off, leaving me to peruse the show's remaining delights by myself. Delights such as Hot Swap: All Hands On Deck, where two players sail a ship around a little globe, collecting treasure and fending off pirates. The twist is that the controls are little modules that you need to plug into slots, and the double-twist is that each dock can only fit two of them at a time. You need to load cannons, fire cannons, raise sails, drop anchors and steer. But mainly you need to frantically hammer the button that puts out all the fire. 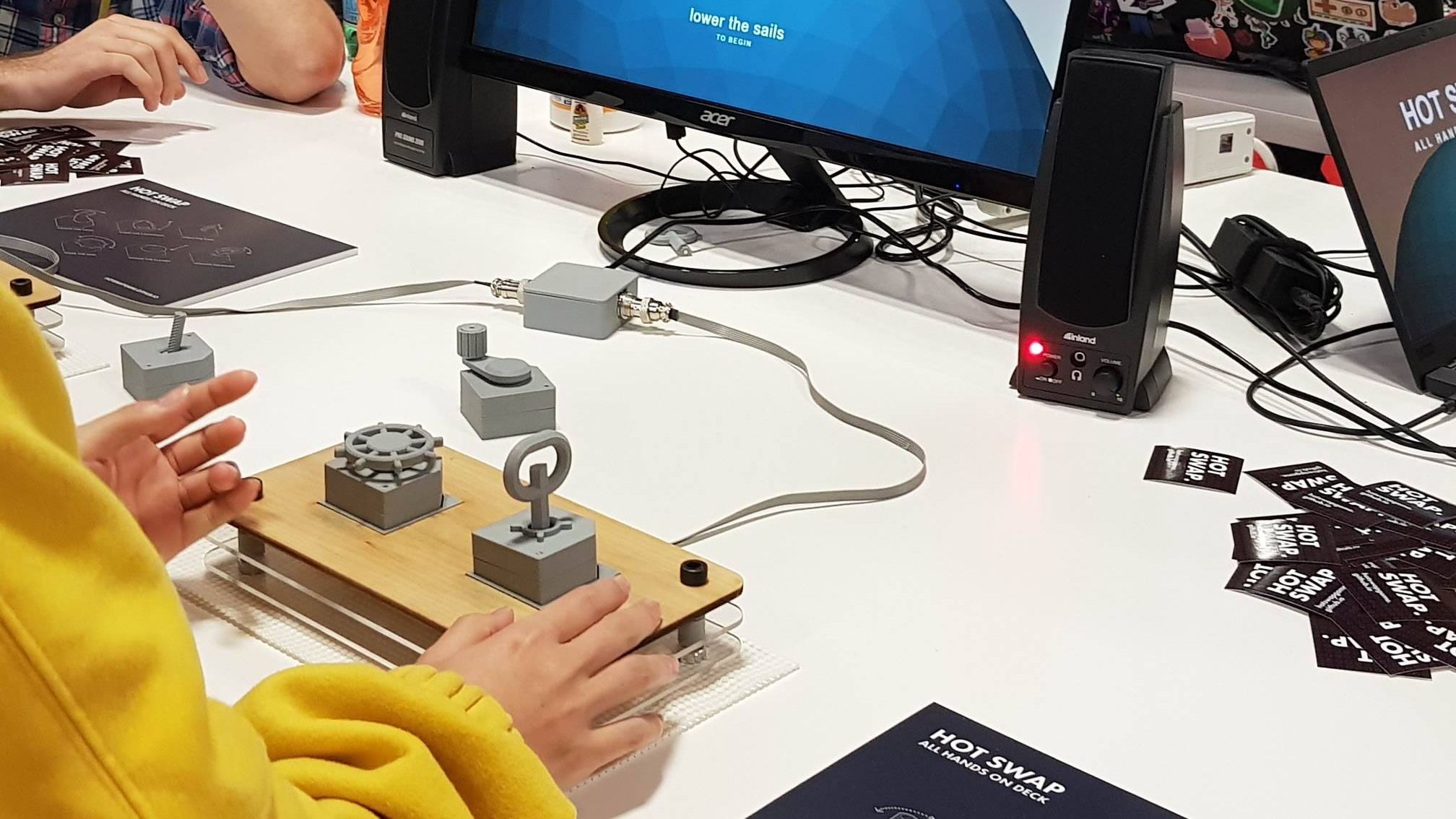 From there I spied The Book Ritual, where you pick an actual real life physical book and help it to "remember what it’s like to be human by doing increasingly creative things to it". I'm quoting Alice Bee there, because The Book Ritual was also at last year's EGX and Alice wound up writing about how she went to school with the bloke who made it. When played at conventions, The Book Ritual involves feeding your book into a shredder that looks like this. 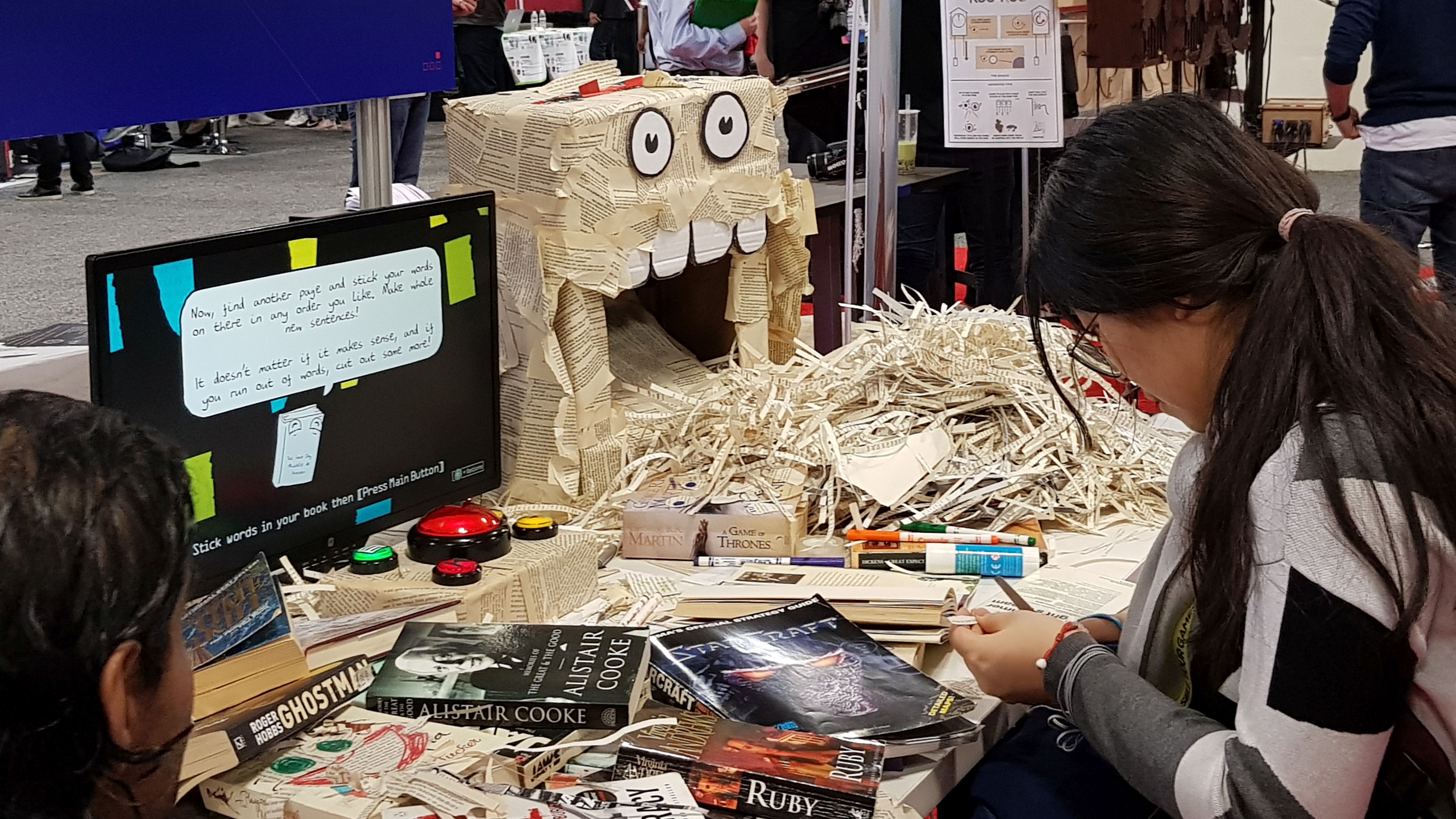 Instead of destroying precious literature, I sat down at Cook Your Way. Most of the games at Alt.Ctrl.GDC were, first and foremost, frivolous. Cook Your Way had an element of that, but it was based on its creator's experiences as a Brazilian migrant at border crossings. You have a cooking station in front of you, and are told to prepare a dish in order to prove you can be a valuable member of society. Two inspectors make comments as you cook, all while a webcam displays your face on a screen to ensure you feel uncomfortable.

The cooking itself has you placing ingredient cartridges into your station, then chopping and stirring them while simultaneously answering personal questions. The idea is to make you feel stressed and off-balanced, all while two daft border guards and the task itself plays up the Kafkaesque absurdity of such situations. (Cook Your Way would later be the centre of an argument with my housemate, a furniture designer who insists that the game would have made more sense if it had involved building something. Fortunately he will never read this.) 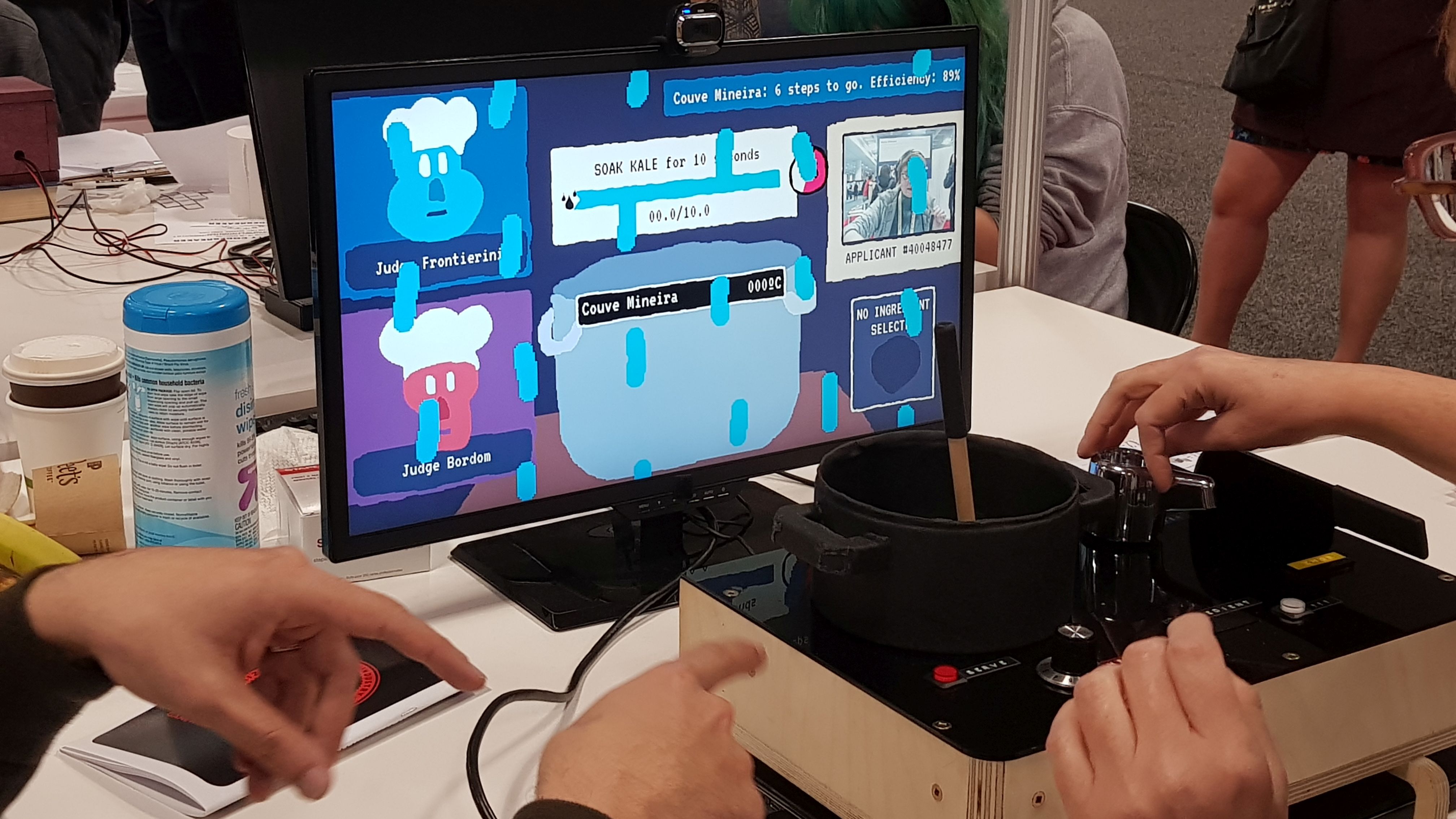 By the time my entry form had been marked with an inevitable "application pending" stamp, people had started packing up. There was just enough time to squeeze in a go at Table44, which is basically Simon Says but with a pillar of coloured lights instead of an exasperated parent or school teacher. You stand around that pillar, in this case with random GDC-goers, as it illuminates a series of lights. Then you repeat that sequence back to it by tapping the table, it bleeps out the same pattern with an extra step, and so and so forth until you lose or stack up lights in the central pillar until they reach the top and it flashes while playing you a nice song. 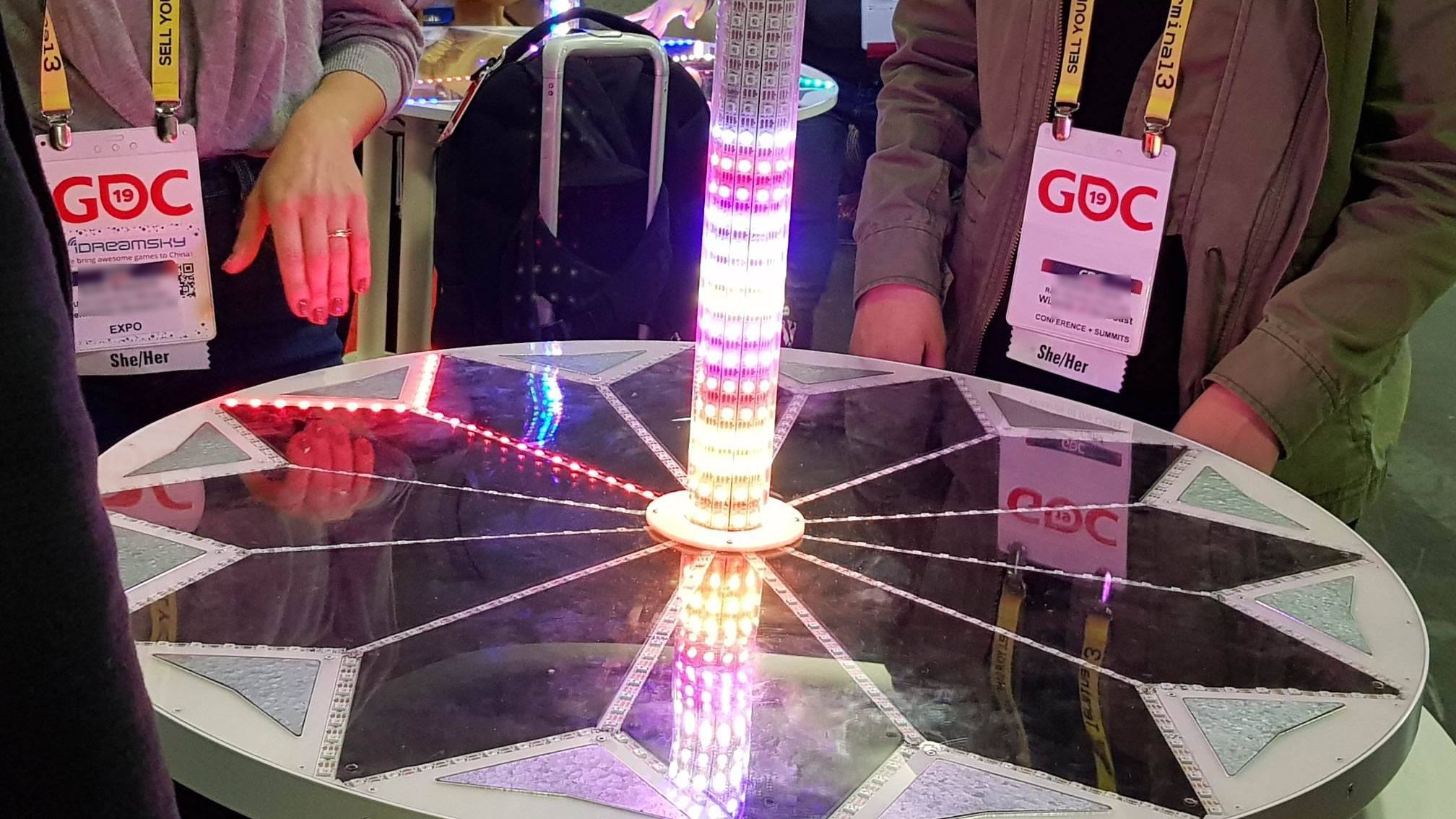 We heard the song!

I'm gutted I didn't get to try any of the other wonders. Especially Coal Rush, a train racing game where each player desperately shovels coal into a fake steam engine. 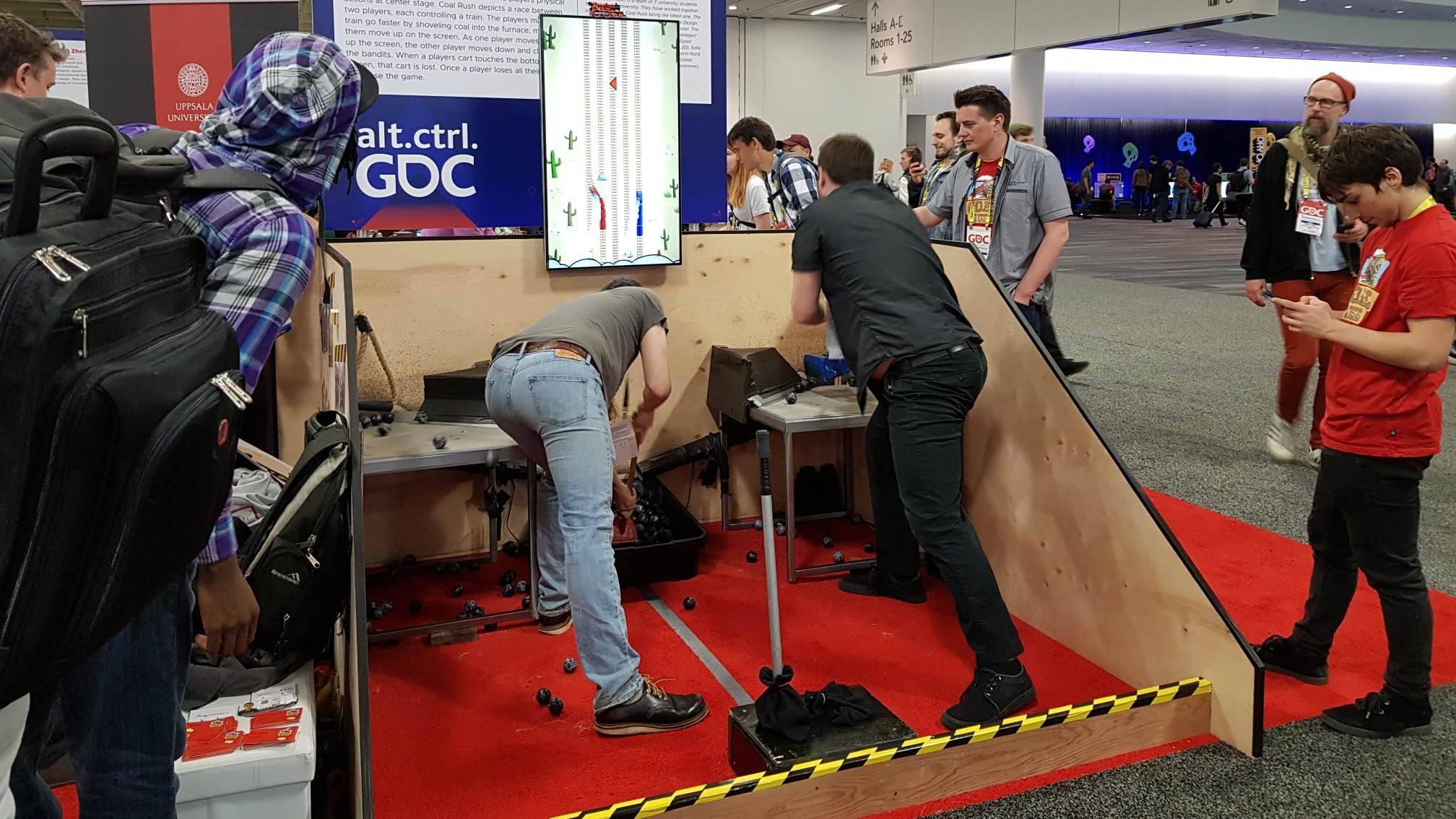 Or Extrareality Codebreaker, a puzzle where you follow clues to assemble a physical controller that intersects (somehow) with a digital game displayed on tiny screens. 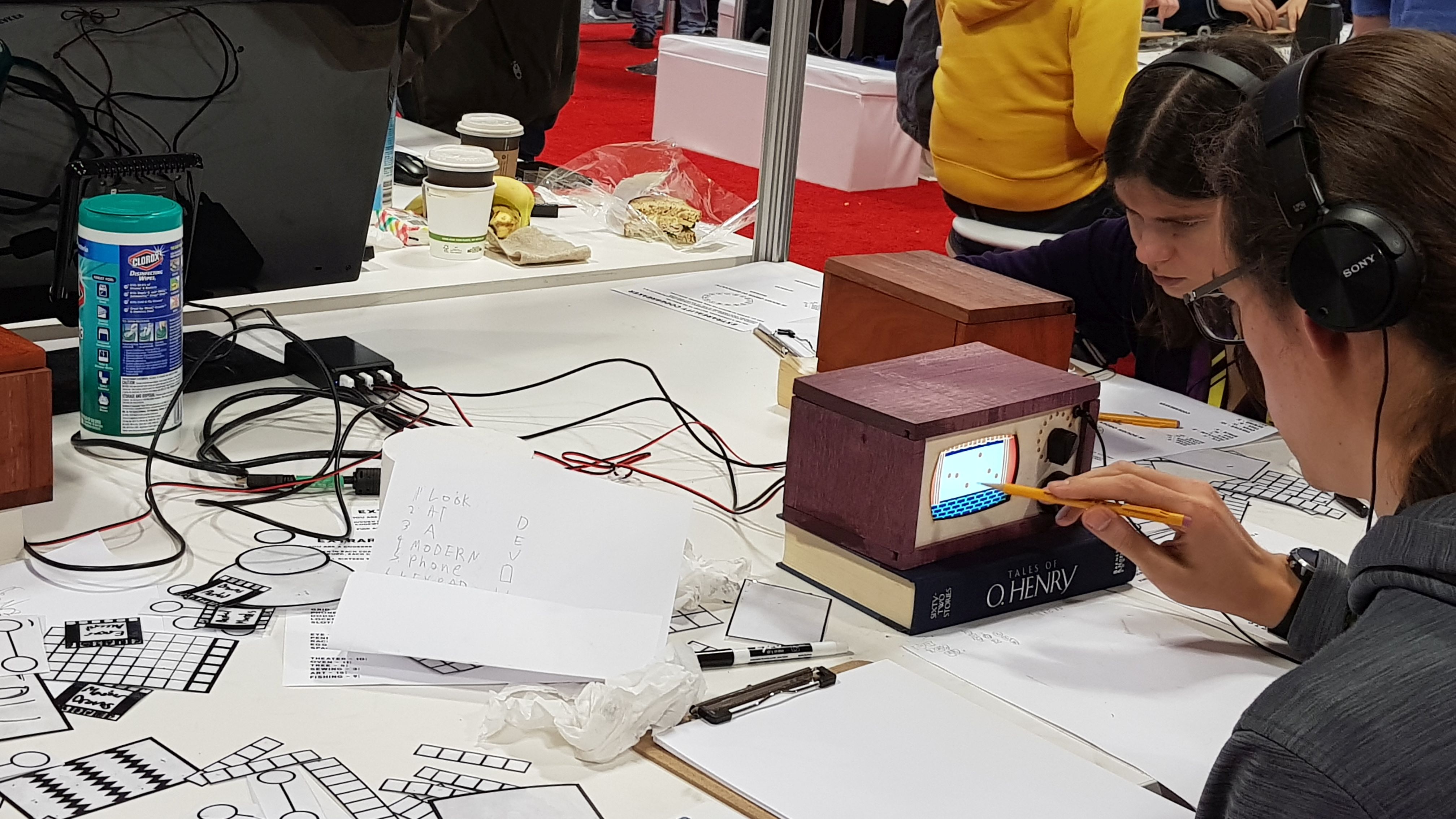 Also some people were doing something with toilet plungers? You can apparently download Plünge right here but the download doesn't come with physical plungers, so I dunno man.

Alt.Ctrl.GDC was a splendid space, packed with treats I haven't even had time to mention. You can see them all of them on the GDC website.

You know, I'm pretty sure RPS is hosting something similar at Rezzed this weekend.