Regular readers will know that I play a lot of The Sims 4 these days, although I don't actually play the game where you puppet a tiny person. I just build homes. My current project is building an ideal home for each of the RPS staffers, having started with a ferny cottage for Alice 0.

I've mostly been using the restrictions provided by the Tiny Living Stuff pack which came out at the start of the year (a length of time which might as well mean "a literal decade ago" at this current stage of the year of our lord, 2020). It turns out that being restricted to "just" 100 tiles in The Sims still allows you to build a home larger than the one most average real families live in, albeit smaller than the huge McMansions of most average Sims families. Anywho, I decided my next build would be for Sin, and took obvious inspiration from her hermiting around the RPS Minecraft server.

I present Sin's custom made hermitage! It is merely coincidence that we are now forbidden from all social contact as well. 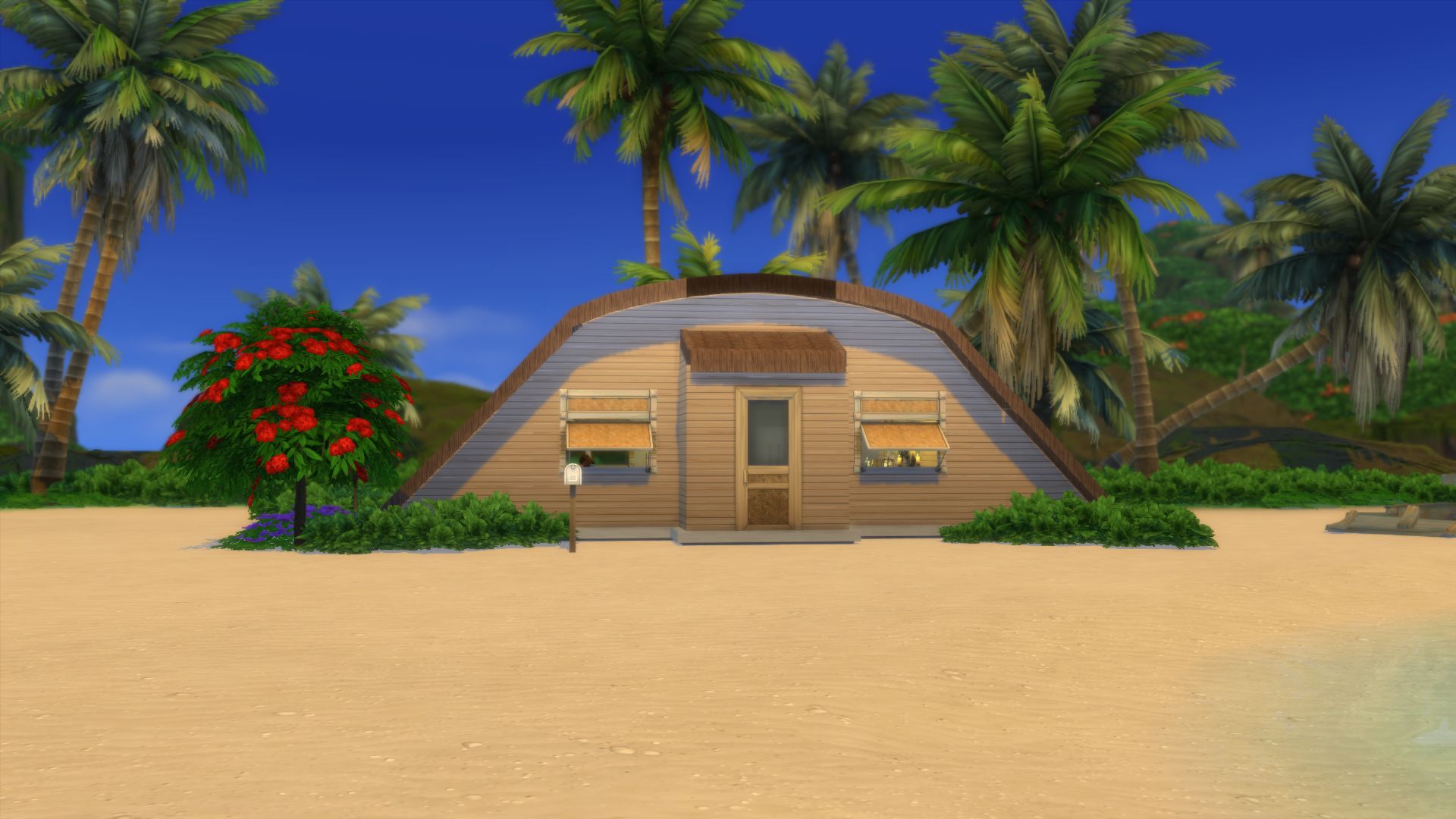 This was a smaller and less involved build than the cottage for Alice 0, because a hermitage implies a certain lightness of living - but I still wanted it to be a functional home, and I seem physically incapable of not cluttering up a kitchen. I do feel that I put some thought into the small touches, though. Here's the full footprint: 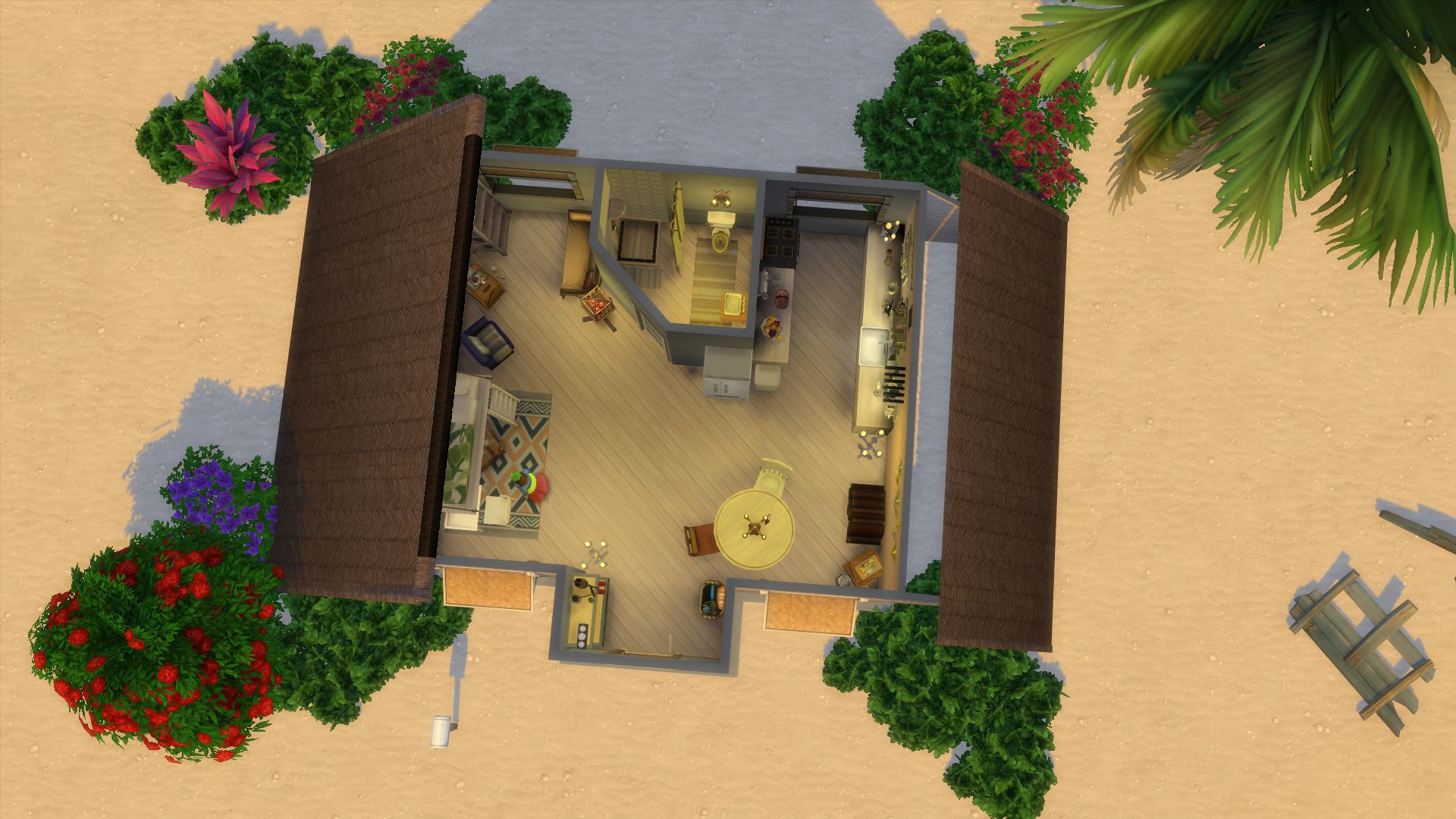 The foliage at the corners is to disguise the weird gap between the ground and the sides of the building, which are just two slanted roof bits stuck on the side (inspired by builds like this Hobbit home, which you will note is infinitely smaller and better than my attempt). I didn't get the angle right on the sides, but it's a cool technique to play around with.

The bathroom is, like the sausage on a full English breakfast, a breakwater, in this case between the kitchen and the reading nook. Worth noting is that this hermitage would, in real life, be an inexcusable fire hazard. I decided to build it on an off-the-grid plot, which means most electronics don't work - including lights. Sin's hermitage therefore features a prohibitive number of candles, which is especially bad in what I am presenting as a wood-and-plaster building with a thatched roof.

The entrance has a small bag of beach supplies on the right, and the combined coat stand/boot cubby on the left. 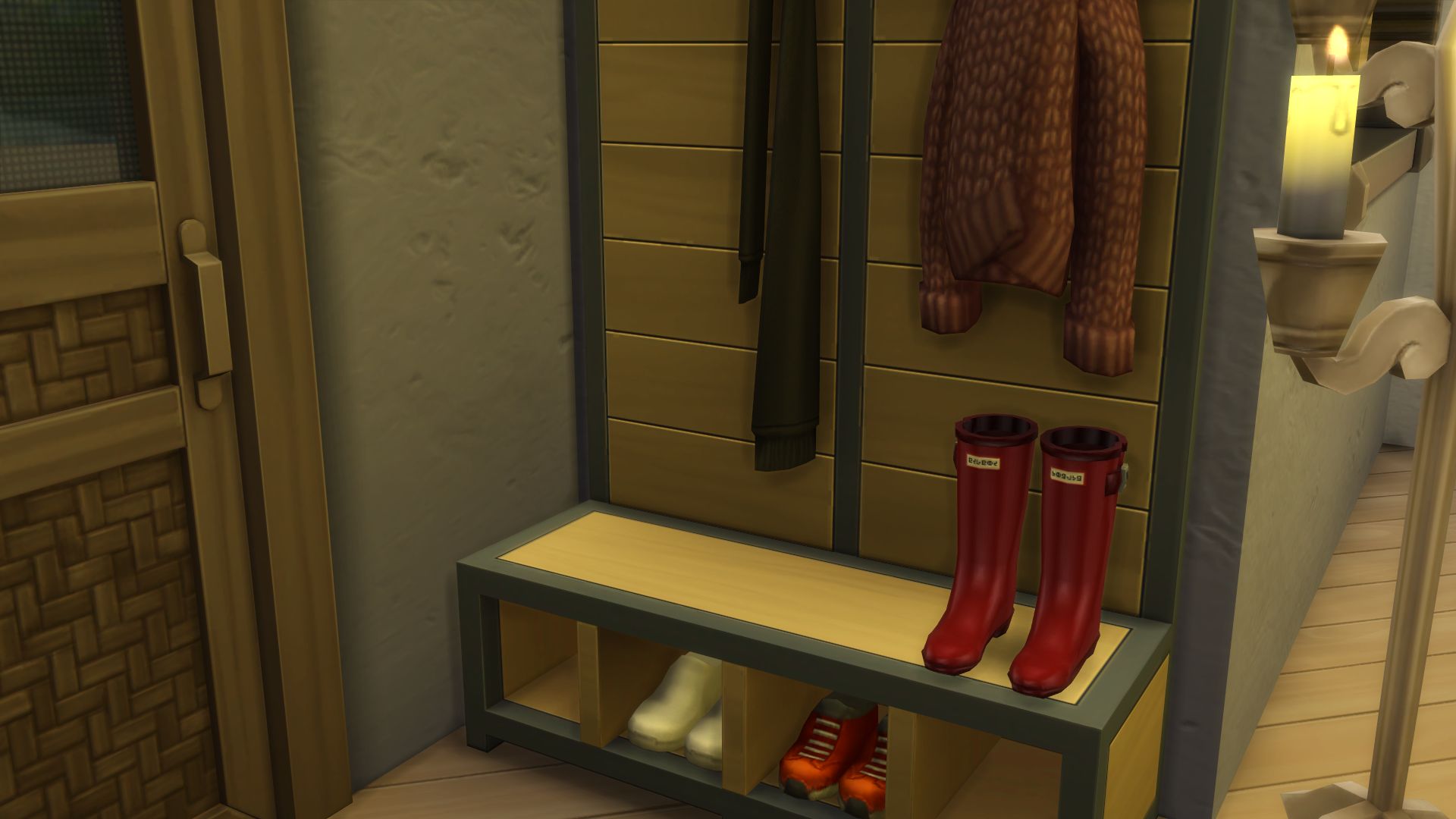 I added a shiny pair of red wellies, because I imagined Sin striding around on wet days in them, collecting things washed up on her island. 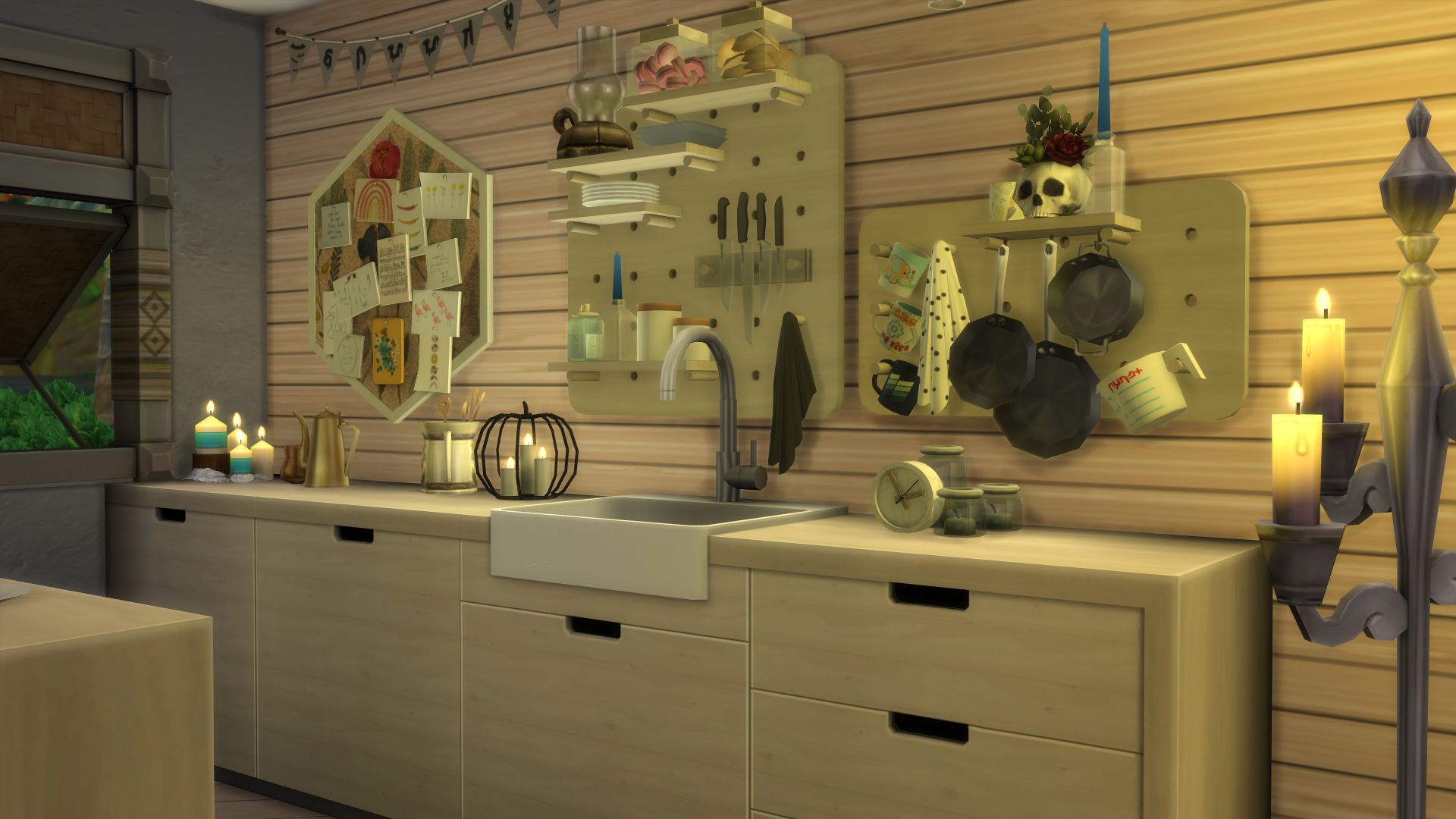 The kitchen is made mostly with custom content pieces from Ravasheen (who remains a big favourite of mine) and the Simkea pack that vidbud Alice L recommended in one of her best custom content videos (which I have embedded below because it is never not relevant). In particular, the cookie jar on the top shelf there is, I imagine, full of Sin's favourite sesame cookies, which she eats at her desk at work.

Also on the left is a dining table area, and some crates and wood stacked in the corner, gleaned from Sin's foraging around the island, and flotsam and jetsam washing up on the beach. 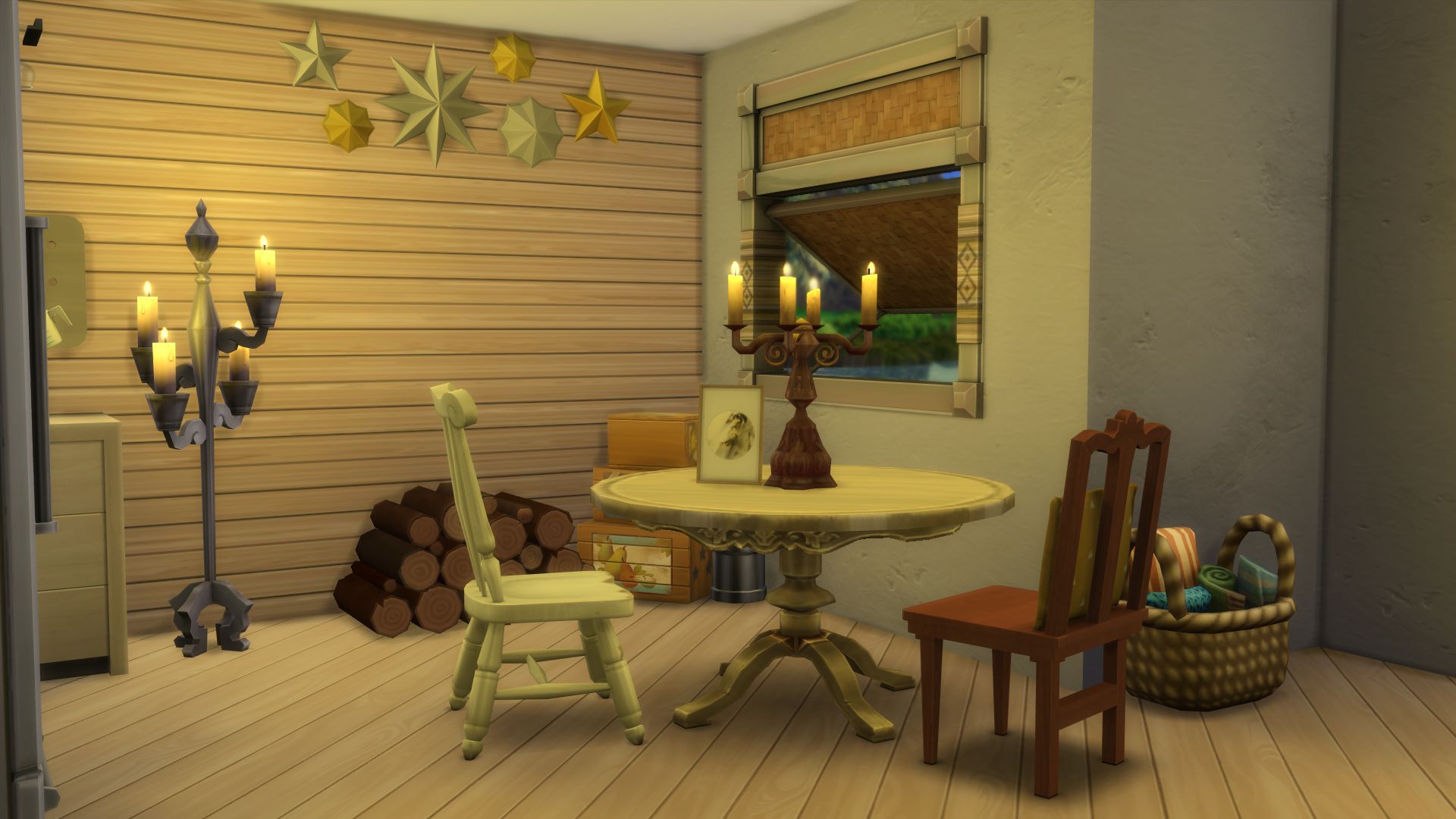 Sin's hermitage has a wood burning stove, which is what allows her to cook off the grid, so I'm pretty pleased that I remembered to add a log pile as a wholly realistic detail. The breakwater bathroom itself, meanwhile, is a bit eclectic, and so I like to imagine that Sin cobbled together some of the bits in there herself. 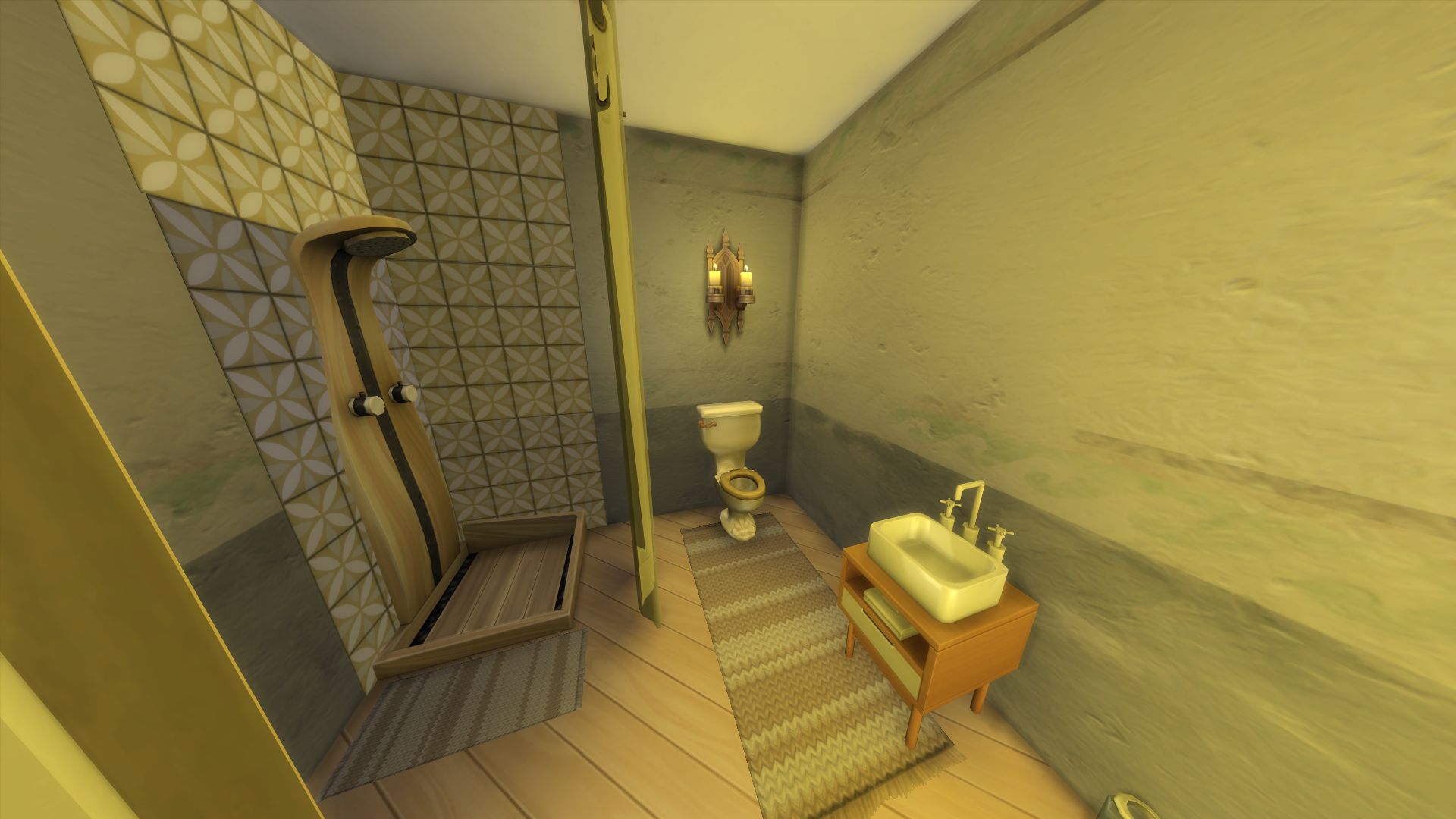 There's the usual pile of dangerous candles in one corner, as well as wall sconces, and a sort of modesty veil slash shower curtain dividing the room. The tiles behind the shower are from a recent, new custom content set of tiles also by Ravasheen, and I love them. 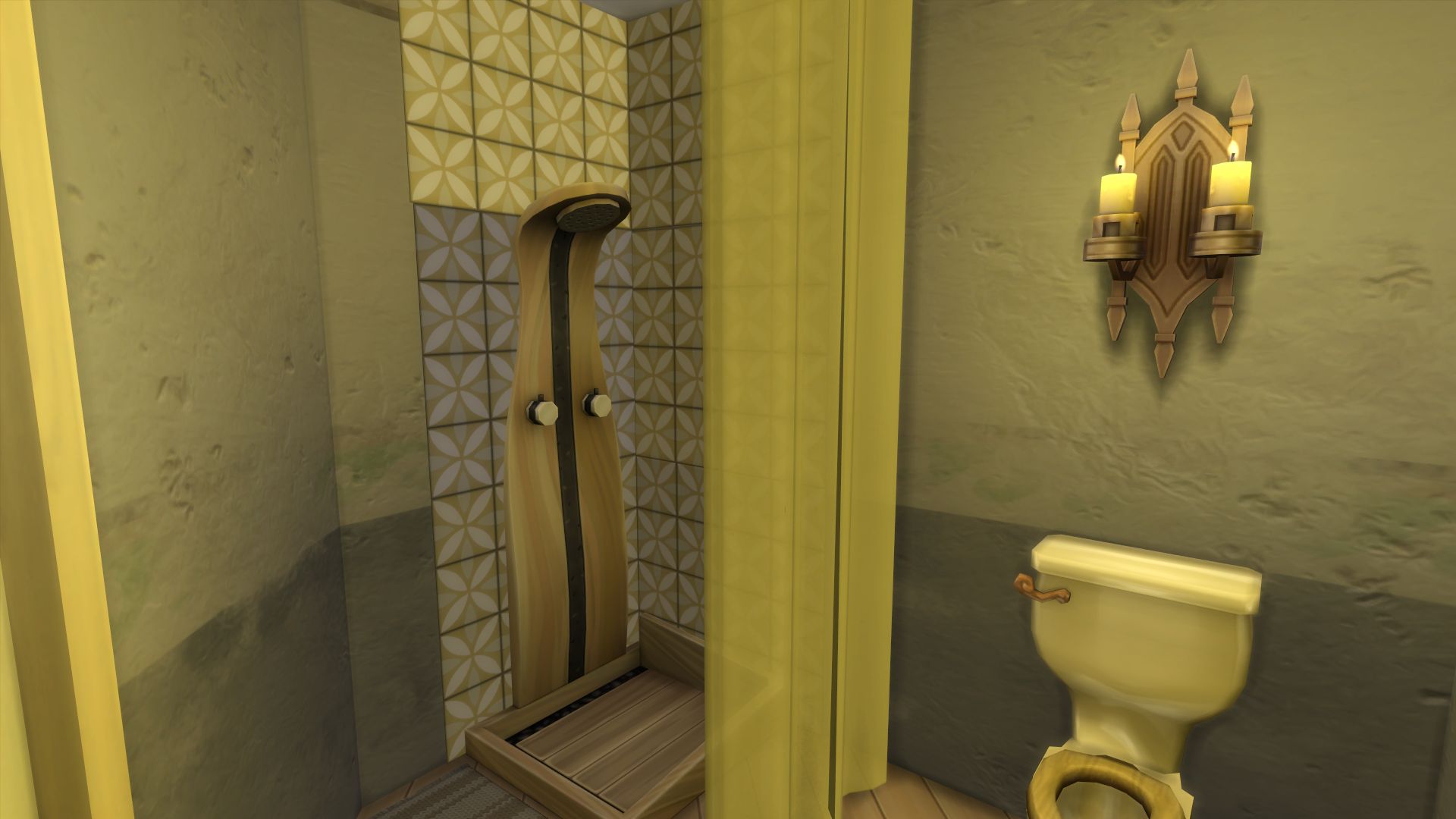 Back in the main area, and we see a hanging bunk bed made of beach wood and beach... rope? I imagine the mattress is stuffed with dried palm fronds. The height of the bed allows for a modest desk underneath, which I playtested (everything is functional). 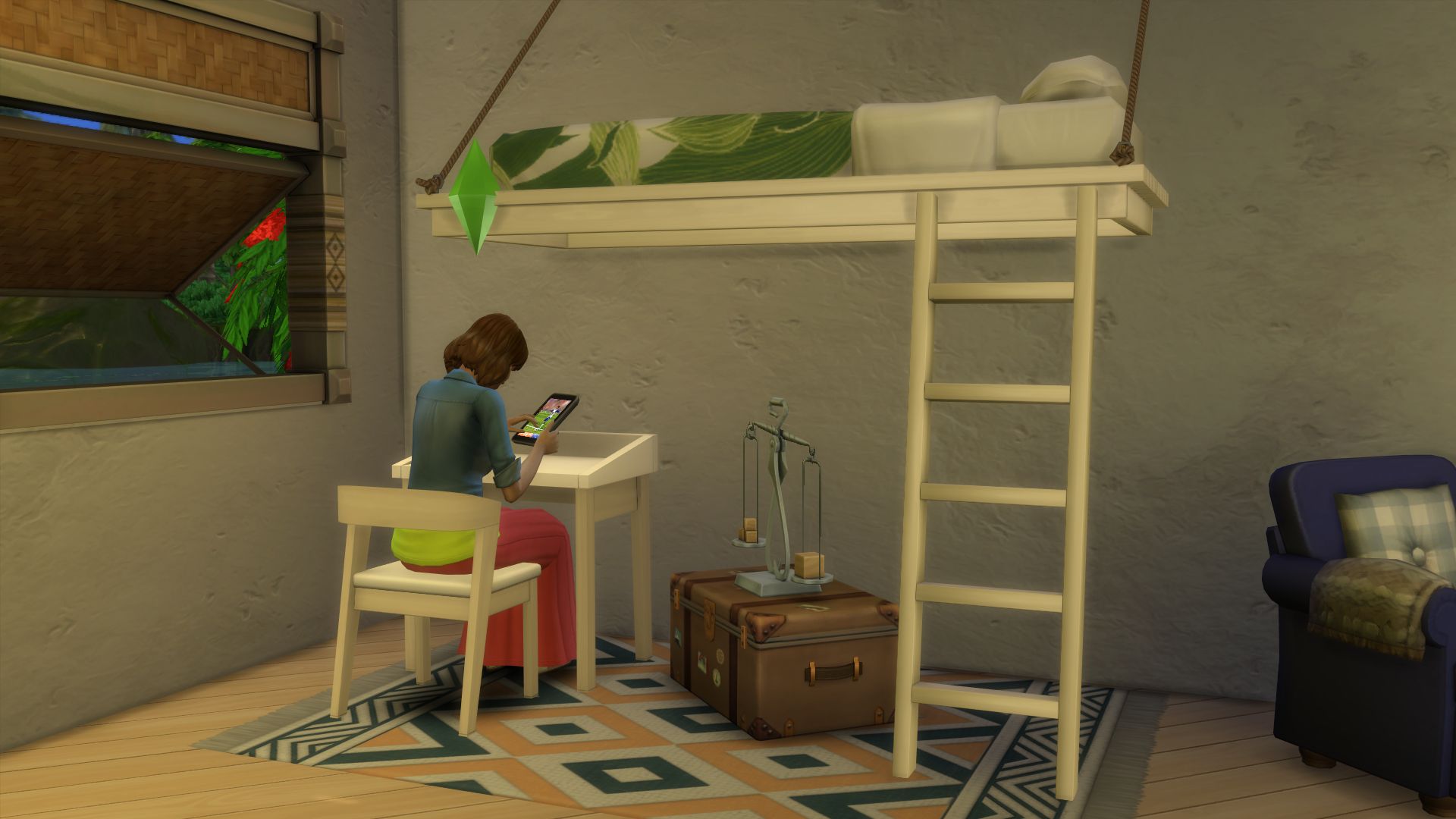 I didn't actually make a Sin Sim, but the randomised one I used for testing actually isn't bad so I allowed her to remain in the screenshots.

Because this is off the grid, there is no TV for a living room (though Sin has a hand held device so she can still play her beloved indie games). Instead there is what I am choosing to call a Book Nook, in nauseating interior design fashion. 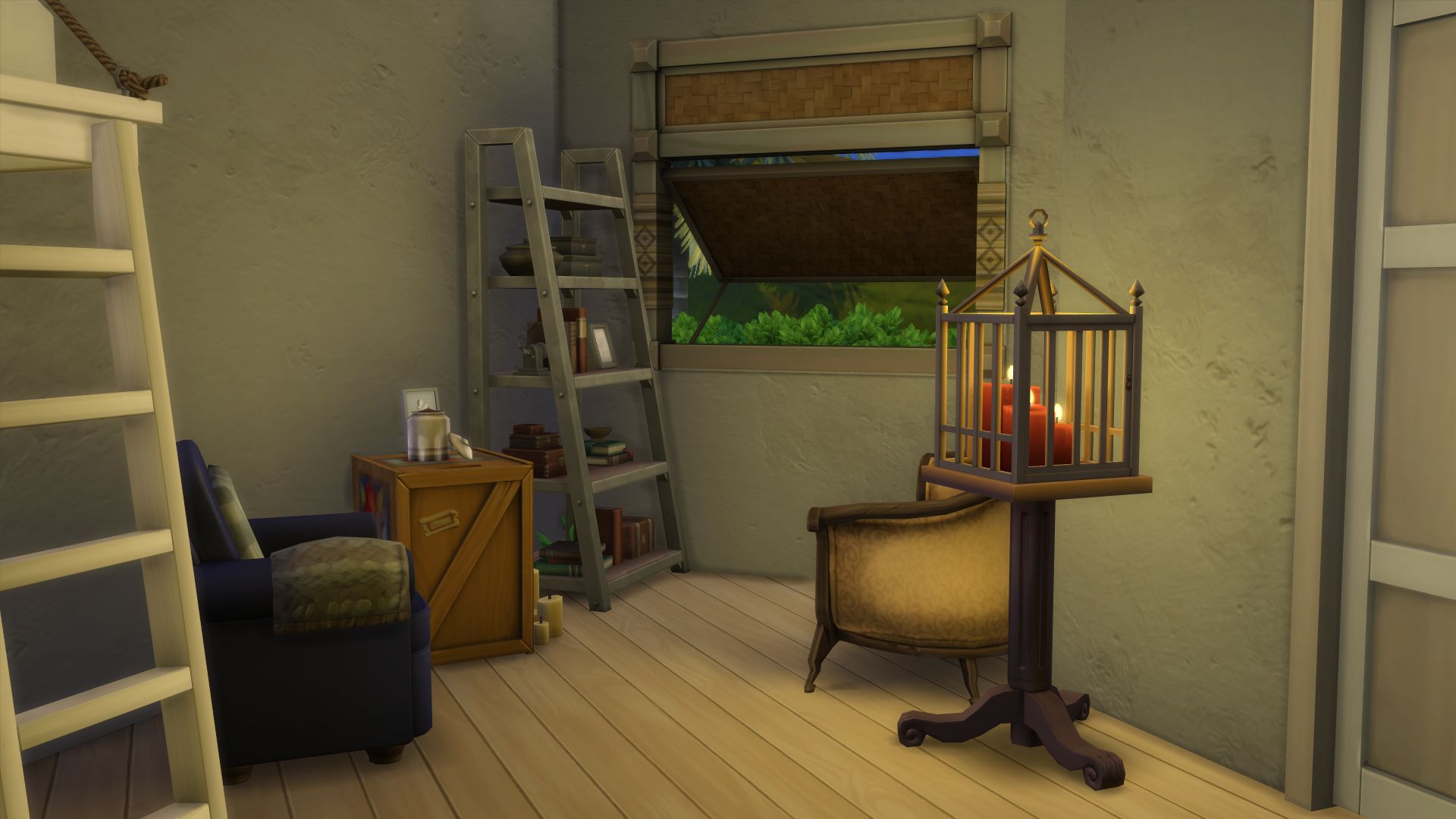 The side table is another scavenged crate and, perched atop it, Sin has more of her favourite cookies in a little jar. 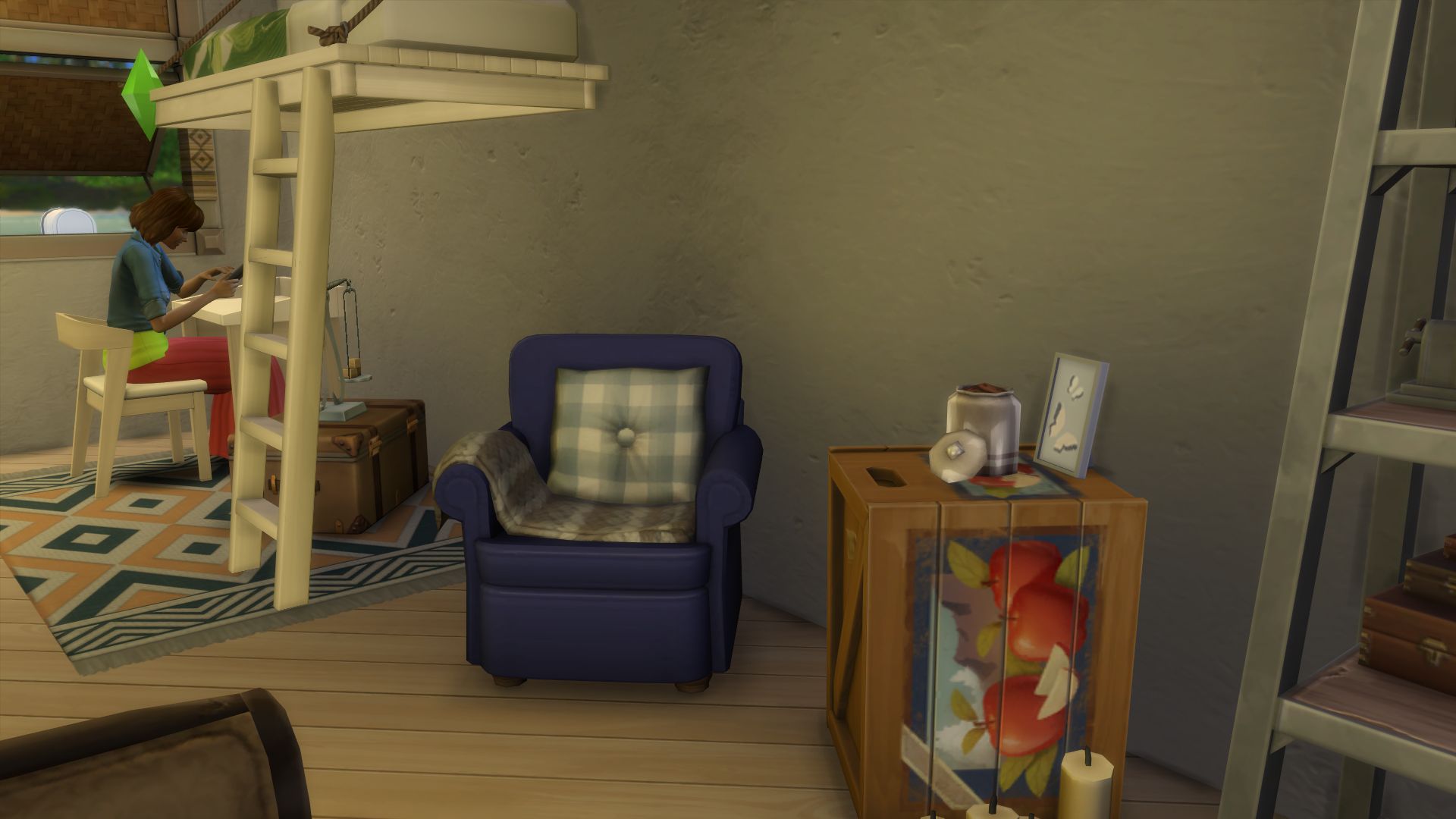 Now that I'm done with this one, I'm not sure who to do next. I'm tempted to try and make some sort of live-in zoo for Nate and his family, but that's a bit daunting...