Want to know the best skills and Godly Powers in Immortals Fenyx Rising? In Immortals Fenyx Rising, you complete quests for a bunch of gods. However, you can also wield some of their power for yourself by spending Coins of Charon to unlock new skills and Godly Powers. There are plenty of abilities to choose from, so choosing which ones to unlock can prove overwhelming. Fortunately, that's where we come in.

In this guide, we explain which skills and Godly Powers to unlock first in Immortals Fenyx Rising, so that you're always ready for the challenges that lie ahead.

Immortals Fenyx Rising dripfeeds new skills and Godly Powers to the player throughout their journey, but the player can also take charge of their own build and spend Coins of Charon to unlock and upgrade abilities of their own.

To unlock new abilities and upgrades, you'll need to progress through the main story until shortly after the prologue, where you'll find the Hall of the Gods in the lower section of the Valley Of Eternal Spring. At the top of the tower is a range of instruments used to alter and upgrade your character. One of them is called the River Styx Cistern, and this is where you can spend Coins of Charon to unlock new abilities. 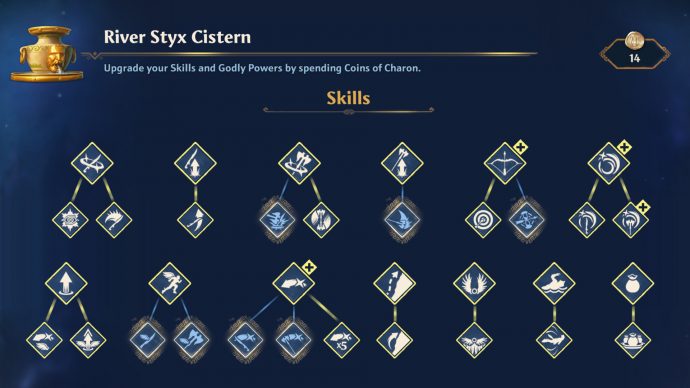 There are 13 base skills in the skill tree, and each one can be upgraded between 1-3 times. But there are also special abilities called Godly Powers, which have their own separate tree. Three of these Godly Powers are unlocked fairly early on in the main story, but the others must be purchased at the River Styx Cistern. In addition, all 6 Godly Powers can be upgraded just like regular skills.

All the skill upgrades are useful in some capacity, but some are really game-changing and will help you greatly in matters of war, exploration, and puzzle-solving. These are the best skills to unlock first in Immortals Fenyx Rising:

The trio of Climb Leap, Glide Boost, and Swim Dash will help enormously when it comes to traversal and exploration. When it comes to combat, the Axe Counter Attack is by far the strongest skill I've found, particularly if you unlock it early. With this skill, you can follow-up a parry with an extremely powerful stunning counterattack that can kill smaller enemies and stun larger enemies in a single hit. The Axe Dodge Attack offers a similar power for dodging. 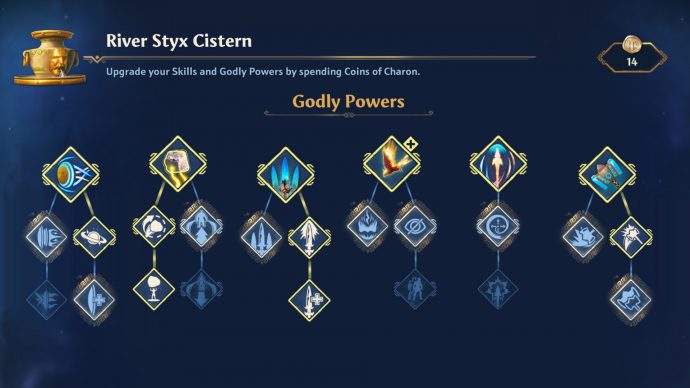 As for Godly Powers, three must be unlocked by progressing through the story:

But the other three Godly Powers must be purchased. In a nutshell, Hephaistos's Hammer deals huge damage and little stun; Ares's Wrath does the opposite; and Athena's Dash strikes a balance between the two. Personally I like Hephaistos's Hammer most, because its sheer damage allows you to end fights pretty quickly - and it can also be used to knock objects flying, which is useful for puzzles!

So with all that in mind, here are the best Godly Powers to unlock first:

Going this route will give you the early benefits of the Hammer, along with Herakles's Leap to help deal with flying enemies. Then you pick up Ares's Wrath for huge stunning potential (and the ability to triple-jump, albeit at huge Stamina cost), before moving onto Athena's Dash as another powerful attack to help mix things up.

Abilities to help with solving puzzles

Certain abilities are particularly useful when solving the dozens - dare I say hundreds? - of puzzles dotted about Immortals Fenyx Rising. I've listed them below so you know what you might be missing:

With all these abilities at your beck and call, you can be sure you have all the tools required to solve every puzzle in the game.